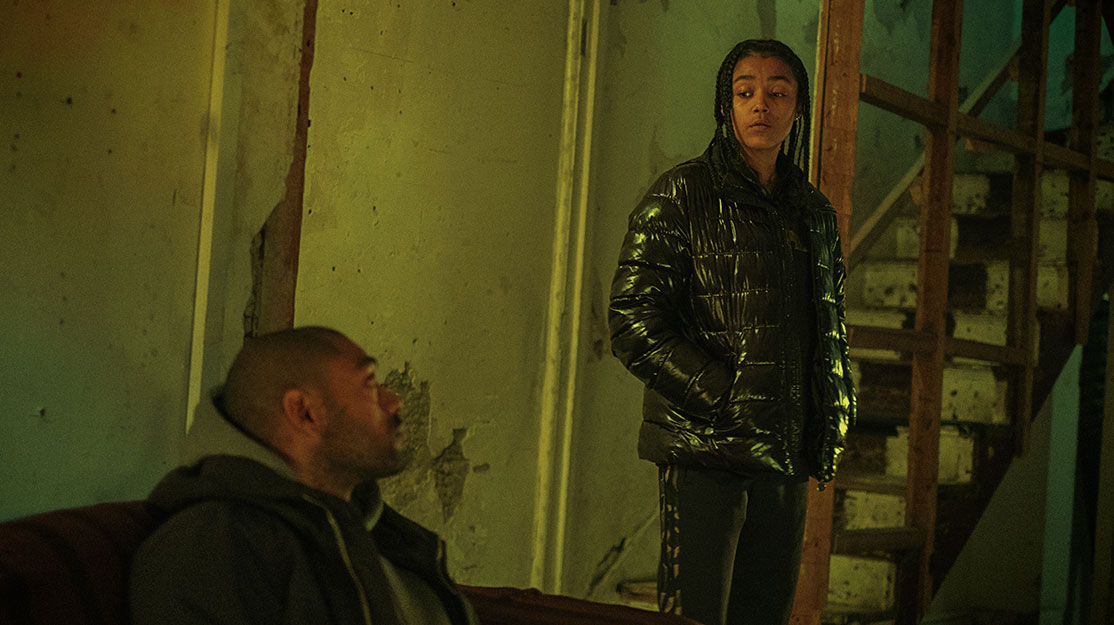 Actor Jasmine Jobson and the creative team behind British drama Top Boy discuss reviving the Channel 4 series for a third season on Netflix and bringing authenticity to the fictional Summerhouse Estate.

Six years after its second season came to an end on Channel 4, British drama Top Boy returned to screens last year with a third season on Netflix. Ashley Walters (Bulletproof) and Kane Robinson (better known as UK rapper Kano) reprised their roles as Dushane and Sully, respectively, in the gritty and stylish crime series about two London drug dealers on the fictional Summerhouse Estate.

The new episodes pick up as Dushane returns from exile to London to reclaim his throne in the highly lucrative drug market. He teams up with Sully, his spiritual brother, partner and sometime rival, who is also returning to the same streets after his own form of exile – prison – comes to an end. Awaiting them both is Jamie (Micheal Ward), the young, hungry and ruthless gang leader whose ambitions leave no place for Dushane and Sully.

As part of Bafta Television: The Sessions, actor Jasmine Jobson and the creative team behind Top Boy recalled how Canadian rapper Drake rescued the series from being axed, the challenge of depicting the uniqueness of London and how Jobson gets into character.

Jobson is nominated for Best Supporting Actress at the Virgin Media Bafta Television Awards this Friday for her role as Jaq in Top Boy’s third season. Earlier this month, casting director Des Hamilton won Bafta’s first ever Scripted Casting award at the Bafta Television Craft Awards for his work on season three.

Drake was a fan of Top Boy and teamed up with creator Ronan Bennett to take it to Netflix…
Bennett: After two successful seasons on Channel 4, when Top Boy was cancelled, it was one of those ones I wasn’t able to shrug off. It meant too much. It was an incredible family feeling about the cast and the crew and filmmakers. It was very hard and difficult to understand. When I heard that Drake was interested, I didn’t pay it a lot of mind, partly because I didn’t know who he was. It wasn’t until I met him a bit later that it became clear he was serious and we really had a chance of going forward.
I realised maybe it turns out he’s quite big. We met him in London, myself and my colleagues, and he was great. He was very genuine and just really loved it, and all he said to us was, ‘We just want you to do what you do and all we want to be is the fuel to your fire and to help it get back up again.’ He didn’t want to control it, he wanted us to do the same thing again.

Bennett lives in Hackney, the London borough where the series is set, which helped him to reflect real-life communities on screen…
Bennett: I’m originally from Belfast in Northern Ireland. I would say the community I grew up in was faced with similar problems that the black community in London is faced with. So there was an immediate identification there and a shared background. Then it’s just about, as a writer, keeping your eyes open, keeping your ears open, talking to people.
It becomes very easy for creative people, once you can make a living for yourself, not to move from behind your desk, to stay in front of you computer writing. But I’m really interested in the world around me, I’m interested in my neighbours, I’m interested in the people I pass on the street. When any of them find the time or generosity to talk to me and answer any questions I have, I will always take [the opportunity], because that’s how you learn.
I’m always very happy when people say Top Boy reflects their lives because I’m obviously not from that community, but I’ve spent a lot of time talking to people about every aspect– not just being on the road, but school, family, expectations, dreams, all of those things. As a writer, everything goes into the mix. All the things you see and hear and feel, they all go into the mix.

Talking tough social issues is something Jasmine Jobson loves about the show…
Jobson: It’s so true, so raw, so edgy. It’s been like that from the very first season. Ronan’s been very good at not sweeping anything under the carpet and outlining some of the things that need to be said.

With every role, Jobson strives to embody her character…
Jobson: I have to take a few traits from myself and add to the character, a few from the character and add to myself. I would definitely say that’s my process for getting into Jaq. One of my things was how I was going to be able to separate myself from my character because it’s one thing becoming my character, but you don’t want to bring that person home with you. I noticed I’d be in my trailer and, every day, getting out my costume, every layer of clothing I took off was a little piece of Jaq I was putting back. Every piece of clothing that was my own was a little piece of myself I was getting back to go back home with. That is my process.

Aneil Karia, who directed the final three episodes of S3 after the first seven had been filmed, was a fan of the original series and was excited to join the show…
Karia: Obviously there’s a certain amount of pressure in finishing off a series that’s come so far like that, but it’s a bunch of wonderful people. And by the time I was coming on set to start on episode eight, it was already feeling like I was part of a family, as trite as that sounds. It does feel like that on that show.
It was tough. Everyone started off Top Boy in sun-drenched July in London and, seven months later, it was -6°C and I came on board and everyone was slightly fed up. For those guys, it was the final slog, and for me it was the beginning. So that was an interesting one, but it was a fantastic experience.

At the heart of the show is a universal story to which audiences around the world can relate…
Karia: There’s escapism television that takes you elsewhere, away from the heaviness of the planet right now, and then there’s something at the other end of the scale that speaks to exactly what this world is becoming, what it is for better or worse. The most exciting opportunities are saying something about what is a hugely problematic system that we all live in. It was a privilege to be able to work on something so relevant with such a voice. Struggle is pretty universal, I suppose. I’m not surprised it has that kind of global appeal.

The diversity of Top Boy’s cast was one of Karia’s favourite aspects of the series…
Karia: Trained actors, actors who didn’t have training but have been in the game a long time, musicians who were acting for the first time, street-cast people – that mix brought such a unique energy to the whole production, and I loved working with a cast who came to their roles with such varied approaches.
Everyone has a different approach. Ashley is a machine. He fires it and can give you 12 different versions like that. With Kano, it’s about in-depth conversation about backstory. With Jasmine, it’s a whole other approach. Everyone is a total individual, and learning about how you best work with each person is the magical part of the journey.
Everyone knew when it was flowing well, and I guess there must be some link there to the number of people who were involved in music as well as acting. I can’t help but think that brought something really special.

Bennett never thought about becoming a writer…
Bennett: The first things I started to write were pieces of memory and things that were important to me. Eventually, that turned into a novel. After the novel was published, I was contacted by an exec producer at the BBC who had read the book and asked if I’d like to write a film, and I said ‘sure!’ I had an idea for one, and the film [1997’s Face, starring Robert Carlyle and Ray Winstone] was made. It was a hit, and that was it.
One of the things I think you find in this business is one successful show can really help you. People will be interested in you if you do something. That was it for me.