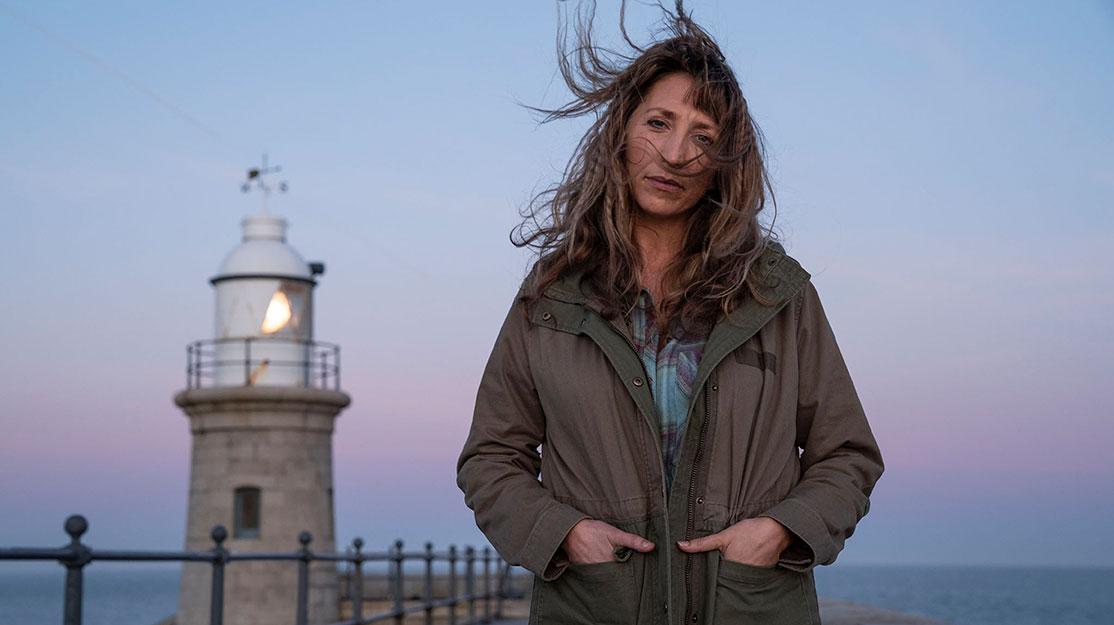 Back to Life star Daisy Haggard and series co-writer Laura Solon reflect on making the dark comedy drama about a determined yet naive woman’s return to her family home after spending 18 years in prison.

While both seasons of dark comedy drama Back to Life have won universal acclaim, its creator and star Daisy Haggard managed to find one vocal critic.

“My daughter was absolutely livid when she read the script,” she jokes. But it wasn’t the unrelenting misfortune of the show’s protagonist – the unflinchingly warm and kind Miri – that angered Haggard’s daughter. “She kept shaking her head and telling me off because of all the swear words. While I was watching the rushes one day, she also asked me if I had really killed someone.”

Produced for BBC Three in the UK and later premium cablenet Showtime in the US, Back to Life follows sweet-natured Miri Matteson (Haggard) as she desperately tries to assimilate back to normal life after spending 18 years in prison for killing her best friend Lara (Imogen Gurney).

Living with her parents Caroline (Geraldine James) and Oscar Matteson (Richard Durden) in a greying seaside town in Kent, Miri juggles a burgeoning romance with neighbour Billy (Adeel Akhtar), her mother’s affair with her pre-prison boyfriend Dom (Jamie Michie) and explosive revelations around the circumstances leading up to Lara’s death. There are also the smaller matters, such as how to get a doctor’s appointment after years behind bars.

Debuting in August this year, season two finds Miri – culturally and sartorially frozen from the time she was sentenced, still unabashedly rocking crimped hair and desperately trying to keep a Tamagotchi alive – trying to move on with her life after the truth about Lara’s death emerges. After learning about the role her other childhood best friend Mandy (Christine Bottomley) played in the crime that sent Miri to prison, Miri faces a new challenge when Lara’s father (Ade Edmondson) is found murdered, with innocent Miri the prime suspect. It makes awkward encounters with Billy’s critical and high-achieving mother (Meera Syal) seem trivial.

Back to Life is, of course, a work of fiction, which came about after Haggard was approached to create a new series by Two Brothers Pictures, the London-based production company behind Fleabag, The Missing and upcoming Jamie Dornan-led drama The Tourist. After several “dreadful” attempts, Haggard says she settled on the idea of Back to Life after moving back in with her parents and reading a couple of prominent news articles about female criminals.

“It was the combination of living with my parents, who were driving me completely mad, and following the stories of two women in the media who had committed crimes and were being painted like sex devils. It seemed to me boring and weird how we vilify women who have done something wrong,” she explains.

“I then started wondering what it would be like for an adult to come of age. It’s hard enough for women in their 30s who have got no job, no partner and so on, with the pressures of society. But then imagine what it would be like if you were a woman who had also actually killed somebody.”

To help shape that narrative, Haggard enlisted the writing services of long-time friend Laura Solon, who she met while working on BBC comedy sketch show Man Stroke Woman. “I was eight months pregnant with my second child when Back to Life got commissioned and it was gently pointed out to me it might be useful to have somebody else on board,” Haggard says. “Back to Life was my other baby, so Laura was the only person in the world it could be.”

For Solon, who started out as a stand-up comedian before deciding the inevitable revolving door of panel show appearances wasn’t for her, it was an opportunity to redress the prevalence of one-dimensional female characters on screen. “It’s slightly better now, but parts for women, particularly in comedy, have not been particularly fascinating,” she says. “Writing gives you the opportunity to write more nuanced and interesting roles.”

This extends to the portrayal of Miri’s parents, Caroline and Oscar. In a memorable scene that exposes Caroline’s affair with Dom, Oscar learns during a visit to a non-plussed GP that he has contracted chlamydia. It’s not often that you see sex and romance between older people depicted on screen, let alone with searing and brutal honesty. “Geraldine said she is never offered parts with these kinds of storylines,” Solon explains. “In comedy dramas, parents are often shown in a certain light. This was about making them feel like they had storylines and a life of their own that isn’t just defined by their child.”

For Haggard, the juxtaposition between Geraldine’s lust and Miri’s innocence was irresistible. “It’s nice to have the key relationship between Billy and Miri be about friendship and not at all sensual, and then to have Geraldine with all this desire. Why not?” she says. “You write about what you want to see and what you’re bored of seeing.”

Haggard and Solon’s writing process, with Haggard based in south London and Solon living in LA, sees the pair exchange feedback over email and long Skype calls at the start of one of their days and at the end of the other’s. Editing and finessing the script, however, is a little more streamlined thanks to Haggard’s dual role of writer and actor. “Daisy is a very good actor so if there is a bit that doesn’t sound great when she reads it, it must be terrible writing,” Solon says.

The second season, Solon says, was more straightforward to write. “It’s very different from the first season in that we were working out what had happened [to Lara], whereas in the second season that has all been resolved. Writing isn’t easy, but it was easier to know what would work,” she notes.

Part of their research for Back to Life involved speaking to former prisoners, both female and male, who had returned to their home towns. “Mostly we asked really basic questions, like how you try to get a bank card and get registered at the doctor’s surgery. Although the show is silly and heightened, it was nice to include some of that fabric,” Haggard says.

“The show was always about wanting a normal life and doing everyday things that to everyone else would be mundane, but for Miri is an enormous challenge,” Solon adds. “There are lots of dramas about being in prison, and this instead focuses on what it’s like re-entering the world when you’ve been isolated, and how different it must be and how self-conscious you must feel.”

Filming for the second season took place over six weeks in Hythe, Folkestone and Dungeness, as well as in south London, amid a national lockdown in the UK. But while sweeping drone footage of the dramatic Kent coastline has become one of the key visual markers of the series, things would have been very different if Haggard had followed through with her initial idea to set the drama near an airport.

“I thought the idea of people escaping while you’re stuck somewhere was quite romantic, but I was wisely advised that it’s still less romantic than setting it somewhere beautiful,” she says. “I’d been to Hythe before and I liked the mixture of it being a place that is bleakly beautiful and then, in the sun, just very lovely.”

Solon says her aim was for Back to Life to have an indie film aesthetic, which prompted a search for a quarry for a scene featuring Lara’s death, before coming across Abbot’s Cliff Sound Mirror in Dover. “With lower-budget comedies, most of them are set indoors and it feels like everything looks quite similar because it’s the same location, usually in London. We wanted to have a feeling of bigness, as well as a cinematic feel,” she says.

The tone and visual style of Back to Life, which is distributed by All3Media International, were also shaped by season one director Chris Sweeney and season two director Ella Jones. Given that Haggard created, wrote and starred in the two seasons, what attributes are needed in a director? “Collaboration,” she answers. “You want directors who are going to understand and not be annoyed if you see a scene differently. I always feel sorry for the directors, but both Chris and Ella were fantastic in different ways and were understanding of how irritating I could be.”

“I feel like Daisy directs as well, though,” Solons adds, “because she’s so close with the cast and she’s acting alongside them. If Daisy is in a scene, it allows the other actors to follow her lead, and she’s also setting the tone. She would often have discussions with the actors on set about the scenes.”

While all the loose ends are tied up in both seasons – Haggard says that they write to conclude a season and aren’t interested in leaving cliff-hangers – both are open to the idea of a third run of Back to Life.

“We have had thoughts, were it to happen,” Haggard says. “We want each season to feel like audiences get what they want out of it and are satisfied and enjoy it. I really like how it ends.”