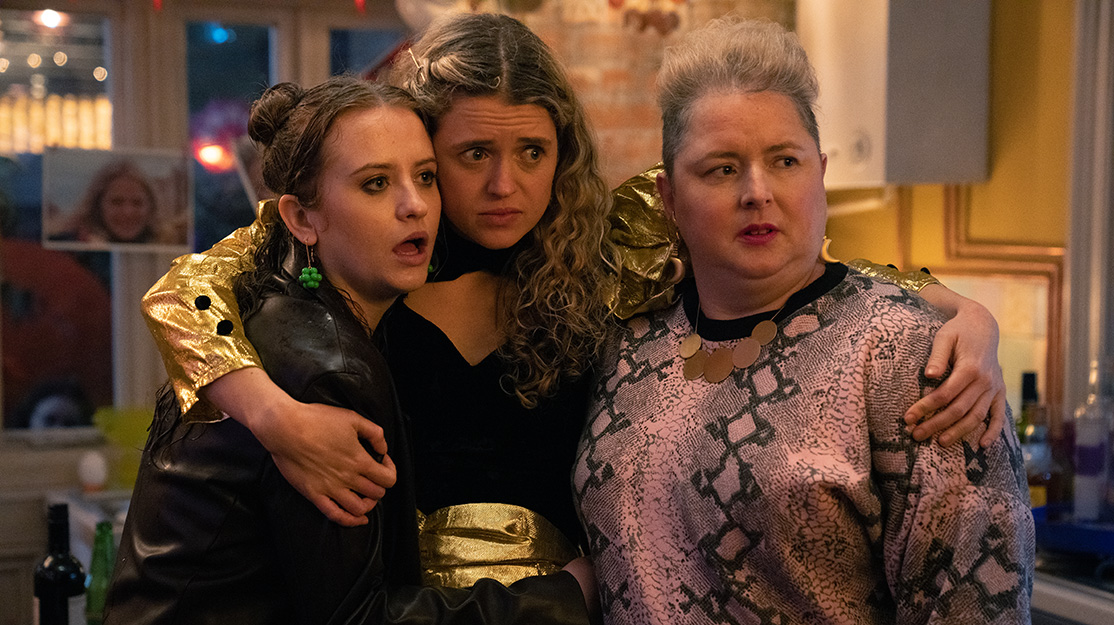 Extraordinary star Sofia Oxenham tells DQ about skewering the world of superheroes and channelling the dead in this Disney+ comedy set in a world where everybody has special powers except one woman on a journey of self-discovery.

In a world where everybody has one of a number of weird, wacky and downright ridiculous superpowers – becoming a human magnet or giving someone an orgasm with a single touch, for example – being able to channel the dead might seem a little mundane.

But as Carrie, one of the central characters in Disney+ Brit-comedy Extraordinary, it means actor Sofia Oxenham gets the chance to bring several oddball and eccentric characters back from the grave.

Although Carrie might be a gentle and timid soul, often overlooked by her law firm colleagues who only see how her powers can help the company, it gives Oxenham a chance to hone some very physical performances that only add another layer of humour to the riotous, offbeat nature of debut writer Emma Moran’s scripts.

“I auditioned for it a while ago now, but I as soon as I read the scripts and read Emma’s writing, I was just so drawn to it,” Oxenham tells DQ. “I just thought it was incredible writing. The humour is so specific, and also the way she writes characters and draws them out, I thought it was really up my street. It was something that I read and thought, ‘Oh, my friends would love this.’”

From Sid Gentle Films (Killing Eve), the eight-part series is set in a world where everyone receives a superpower on their 18th birthday – everyone except Jen (Máiréad Tyers), who is turning 25 and stuck in a dead-end job as she waits to find out what hers might be. But together with her best-friend Carrie and Carrie’s boyfriend Kash (Bilal Hasna), who all share a flat together in East London, she sets out to find out what her power is.

“But it’s about so much more – all the relationships, the friendships, her family. It’s about being in that stage of your life where you’re just trying to figure out who you are or what the world is to you. Using superpowers allows you to explore those themes a bit more thoroughly.”

Like Jen, Carrie is also on a voyage of self-discovery, as she tries to climb out of the shadow of her powers.

“She feels that people don’t ever want to speak to her or know anything about her. They just want to find out about other people that have died,” the actor explains. “Carrie is trying to figure out who she is, she’s trying to take control of situations but she’s also struggling, which I guess is very typical of that stage in your life, trying to figure out things about her relationship, about her work and maybe find the woman from the girl.”

Oxenham, who previously starred in BBC period drama Poldark and Netflix fantasy drama Cursed, admits Extraordinary was the first audition she had felt excited about in a long time, though she initially tried out for the role of Jen. When she missed out on that part, she got a phone call eight weeks later asking her to try out for Carrie. She then got to do some chemistry reads with co-stars Tyers and Hasna before learning she landed the part.

The cast – which also includes Luke Rollason (Jizzlord), Siobhan McSweeney (Jen’s mum Mary), Robbie Gee (Jen’s stepdad Ian), Safia Oakley-Green (Jen’s half-sister Andy) and Ned Porteous (Luke) – then spent two weeks of rehearsals getting into character and building relationships with each other, with the help of some acting coaches, before shooting began.

“I did speak to Emma about Carrie and definitely also Toby [McDonald, lead director],” she says. “I remember Emma saying that Jen was like a cat and Carrie’s like a puppy, which I thought was a really useful analogy. What is amazing is through that rehearsal process – and also through Emma’s writing and the freedom we were given – we got to really develop these characters.

“It was so exciting reading Emma’s writing, and definitely as an actor there was a bit of a buzz, so it could have been easy to over-heighten the performances, but Toby and the acting teachers were keen to make sure we grounded it in reality to make it as good as it could be.”

That sense of freedom continued on set, which Oxenham describes as “really relaxed and free,” giving the cast the chance to try different things and make bold choices – some of which end up in the show. “But in saying that, we all took it seriously,” she says. “All of us felt it was such an opportunity to be able to be in this production and serve Emma’s writing. We really wanted to take it very seriously. But it’s sometimes definitely hard not to laugh when other people are doing stuff. You have to hold it together.”

Filming took place in a studio and on location in East London. Despite some use of green screens for moments where some characters are shown flying, for example, other powers were recreated in an entirely practical way. A case in point is Carrie herself.

“When I channelled the dead, I would just physically – and with my voice – act out the character of the person that has died. Then in post-production they would get another actor to come in and dub the lines over so that it’s his or her voice coming out,” explains Oxenham, who says the role was an “incredibly opportunity” to play a range of characters she might never otherwise play.

“I don’t think I’m ever going to get cast as Hitler,” she admits. “I was really keen to make the physical person very different to Carrie, so I prepared each of them as a separate character to then make all those differences add to the comedy. I did think, ‘Oh, how am I going to do this?’ But after conversations with Toby, we figured out the best way to do it and how we were going to do the channelling.

“I also just thought it was genius from Emma to write someone who is shy and on the back foot and a bit more self-conscious as someone to have the power that channels the dead and then have these incredibly bold, brash characters come out of her with a lot of humour.”

Previewing the series, which launches as a boxset tomorrow, Oxenham says Carrie’s storyline will take viewers in an unexpected direction while exploring her friendship with Jen and her relationship with Kash, who has the ability to reverse time and begins the series auditioning people – and their powers – to join his vigilante group. Another key member of the cast is Jizzlord, a man who can transform into a cat and gets his name after a rather unfortunate incident.

“All of the characters, but especially the main four, have really strong character arcs, which I don’t know is typical in a sitcom,” Oxenham says. “Each of them is in a very different place at the end of the series to where they are at the beginning, and they’ve got great character arcs, which is exciting because it felt like you got to really explore the characters. It goes back to the thing of grounding in reality and truth, which makes the people feel way more real.”

And if she lived in the world of Extraordinary, what kind of superpower would she want? “I’ve thought about it in depth and it changes,” she says. “But I do think that mine would be invisibility, because I love people-watching. Obviously if you’re visible, it’s staring and can be quite rude. I feel like if you’re invisible, you just get to people watch all the time and that would be a great thing to do.”