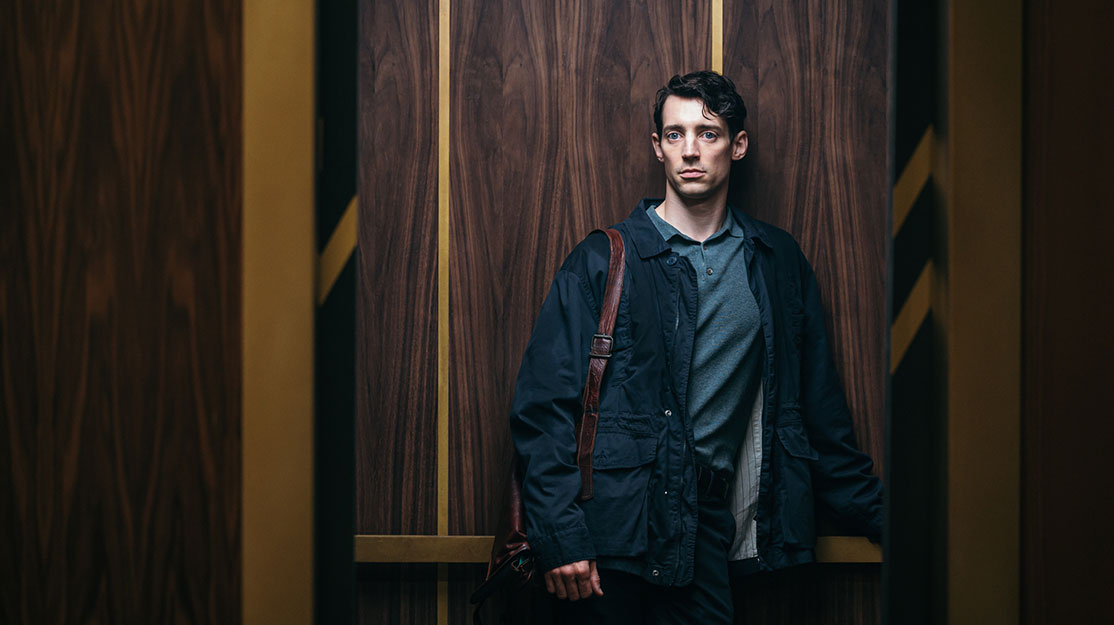 Head writer Mikael Newihl and executive producer Alexander Tanno take DQ inside the making of Swedish conspiracy thriller Max Anger – With One Eye Open and explain why this isn’t another Nordic noir series.

When the emergence of the Covid-19 pandemic last spring forced numerous TV productions around the world into hiatus, the future of international dramas – at least in the short term – was plunged into doubt. How would stories set in multiple countries be filmed when many nations were in lockdown and travel was severely restricted?

The recent launch of Max Anger – With One Eye Open is proof these shows can still be made, although completing the eight-part Swedish thriller was not without its complications as producers Nice Drama and Twelve Town shot scenes in Sweden, Russia, Lithuania and Ukraine.

“Shooting close to 90 days in four different countries during a pandemic is not something we would recommend anyone do, but I speak for all of the cast and the crew when I say we’re very happy with the result,” says executive producer and Nice Drama CEO Alexander Tanno.

Based on the first book in the Max Anger trilogy of novels by Martin Österdahl, the series stars Adam Lundgren as the title character, a former military man who has found love with Russian colleague Pashie (Evin Ahmad). They both work for Vektor, a think tank working on a valuable business deal between a Swedish and a Russian company. But when Vektor is accused of leaking confidential information and Pashie suddenly disappears, Max heads to St Petersburg to find her. With the help of taxi driver Mira (Ieva Andrejevaitė), a new character introduced for the series, Max’s search leads him to an international conspiracy to which he has a personal connection.

The project was already in development at Nice before Tanno’s arrival in 2018 and that of the company’s creative director Mikael Newihl, who is also an executive producer and the show’s head writer, later the same year. Newihl was particularly keen to bring the project to the screen to fill a hole left by the lack of “classic thrillers” that combine suspense, action and drama – and also to offer something different from Nordic noir crime series.

“What we said two-and-a-half years ago was we should not make another Nordic noir,” he tells DQ. “This should be something totally different, and I think we succeeded with that. That was the overall thing. Then, of course, there’s the story itself and, when you read the book, you get fascinated by it and you want to tell this story.”

“At the time Mikael joined, I had read the book and, together with our coproducer Twelve Town, we felt like this held all the opportunities to become such a great series,” Tanno says. “We made the show our numbe- one priority and started working on it and finding the right way into the story. Everyone says, ‘Oh, we’re going to make Nordic Noir 2.0.’ But we never said that. We just said, ‘Let’s not make a Nordic noir kind of show.’ There were a lot of long days, long nights and sleepless nights last year when the pandemic hit us, [but] it just came out a really, really great.”

Distributed by Reinvent International Sales, the series is set in 1996, at the time of the Russian presidential election that would secure Boris Yeltsin’s return to office following his ascent to power at the end of the Soviet Union five years earlier. Admitting he’s a “sucker” for history and politics, Newihl says he was keen to retain the story’s period setting.

“It was a great time but, actually, around 1996 when our series plays out, that is when we had the start of a new Cold War, but we couldn’t see it then because everyone was just focusing on Yeltsin winning and [believing] democracy will live forever,” he says. “We know today that was not actually true, so this was a fantastic opportunity to talk about this, but only in the background because, for an audience, it’s not the sexiest thing to say we’re going to do a series about President Yeltsin’s re-election.”

As a result, the political backdrop to the series sets the scene for the conspiracy thriller that plays out in Stockholm and St Petersburg, with Newihl also keen to have more action in the series than the original story.

“You should never have action just because you can. In the 1980s, you had all these car chases [on screen] and the longer they were, the better, but they never told me anything,” he says. “Here, we use action to say things about characters and the story. Both Alex and I had a very long discussion about this, especially in a pandemic when everything costs more. How do we create this? How can we work with this? Could we keep all this action? But we succeed. You have to be creative in this kind of situation, both in how to make it and how to write it.”

Anders Sparring (The Hunters), Jörgen Hjerdt (Blue Eyes), Pauline Wolff (Sthlm Requiem) and Åsa Anderberg Strollo joined Newihl in the writers room, working together to adapt the novel and then challenge each other’s ideas to ensure the story stood up to scrutiny. Writers were assigned individual episodes, though each contributed scenes or even just lines to other episodes, before Newihl would write the final drafts and then turn in the shooting scripts.

The series also plays with structure, introducing a second timeline at the halfway point with a new story that ties into the central premise as secrets are slowly revealed.

“When you come to the midpoint, all of a sudden, we open up a Pandora’s box,” Newihl says. “There will be something more to this that you didn’t see coming, and then we will tie everything together at the end. It is not just a short flashback, it will turn out to be its own storyline. And instead of teasing it from the beginning or starting with it, it’s just a cool way to doing it. I hope the audience will think so too.”

In terms of casting, it’s notable how many of the show’s actors play against type. Lundgren (The Restaurant, Sthlm Rekviem), for example, appears in his first thriller and had to embark on a strict diet and gym regime to get in shape. He and Ahmad (Snabba Cash, The Rain) also had to learn Russian for the series. Meanwhile, Linus Wahlgren (Udda veckor, Partisan) also goes against type as Ray, a seemingly ordinary hipster in Stockholm who is in fact a Russian hitman. Joel Spira (Top Dog) plays David, an IT manager who makes some bad decisions and quickly finds himself in Ray’s firing line.

“Max Anger in the books is perhaps a bit more of your typical action hero, but Mikael and I wanted to make him less of an action hero. We discussed at length what kind of character we wanted and what kind of casting we wanted for Max,” Tanno explains. “It was Lejla Besic, our producer, who suggested Adam. He’s not your typical action guy but he can portray a spectrum of emotions that just makes the character so much more interesting.

“Then Linus, you’ve never seen him in a role like this. He’s more used to being in a comedy or singing, but he’s so versatile and he does a fantastic job. That idea of challenging people’s perceptions of these cast members is something we all got behind. Joel’s performance is just absolutely amazing.” Newihl also highlights Andrejevaite’s performance as Mira, a character that “pops out of the screen.”

The desire to turn expectations upside-down threads through the series, from casting to the filming locations, with Lithuania and its capital, Vilnius, standing in for much of St Petersburg under the direction of Lisa Farzaneh (Agent Hamilton) and Jesper W Nielsen (Greyzone).

“Similar shows have portrayed Russia at that time as just concrete, very bleak and very grey, but we went into this trying to create something different,” Tanno says. “We had a very clear concept of how we wanted the colours and the lighting, which don’t really make you think of a very bleak Russia that’s a bit boring to hang out in. It’s a more fun world and it’s a more fun colour palette.”

The start of filming was delayed last spring when Lithuania went into lockdown and the production entered “full crisis mode,” with plans rescheduled and scripts rewritten. Then as restrictions eased in Sweden in the summer, the decision was taken to film in Stockholm for two weeks in June before taking a break until the crew could move to Lithuania.

The latter country’s favourable tax rebate system meant it was quickly identified as the show’s central shooting location, while a second unit was dispatched to pick up some footage in St Petersburg itself. The crew had planned to spend more time in Russia than was eventually achieved but, because of the coronavirus restrictions in the country, the producers quickly moved the final days of filming south to Ukraine capital Kiev.

“Ukraine was very special because we had to change the scripts to fit the new environments, but that is how it has been through the pandemic,” says Newihl. “It was the same with Lithuania, which was fantastic but, because Vilnius is not as big as St Petersburg, we couldn’t find the right places, so I worked closely with the directors to come up with new ideas.”

Alhough the series, which debuted on June 6 on Nordic streamer Viaplay, features a conspiratorial plot set against a highly charged political backdrop, it is the show’s universal sense of love and loss that Tanno and Newihl hope will draw viewers into the story as Max attempts to track down Pashie and find out whether she ever did love him or if he’s just been played for a fool.

“He really doesn’t want to look back, only forward, and that is why you really cling on to him – you want to see him find Pashie and see what has happened,” Newihl says. “Then along the way, you will meet so many other characters that you fall in love with. One example is Mira, who meets Max but it is not the typical situation where you think they’re going to fall in love. It’s the friendship that really means something and comes totally unexpectedly, and that has been one of the nicest thing to explore when writing the story.”

The writer recalls speaking to Spira before the shoot, when the actor revealed his initial hesitation about playing David because, at that time, he couldn’t see where the character’s story was heading. But Newihl’s ambition is not to spell out every twist and turn through the story and instead to leave viewers – and the cast – guessing until the end.

“There are a lot of things that start up and things you don’t know in the first episode. And that is the way it’s meant to be, of course,” he says. “For me, it’s so much more interesting if you get to know the characters by their actions. You start to get a picture of them and then, in the end, you will be rewarded because you feel you know the characters and you have realised things by yourself, not by the writer telling you.

“I hope it’s a series you will not watch with one eye open. You have got to have two eyes on it and really invest in it. Then you will be rewarded if you want the big prize.”