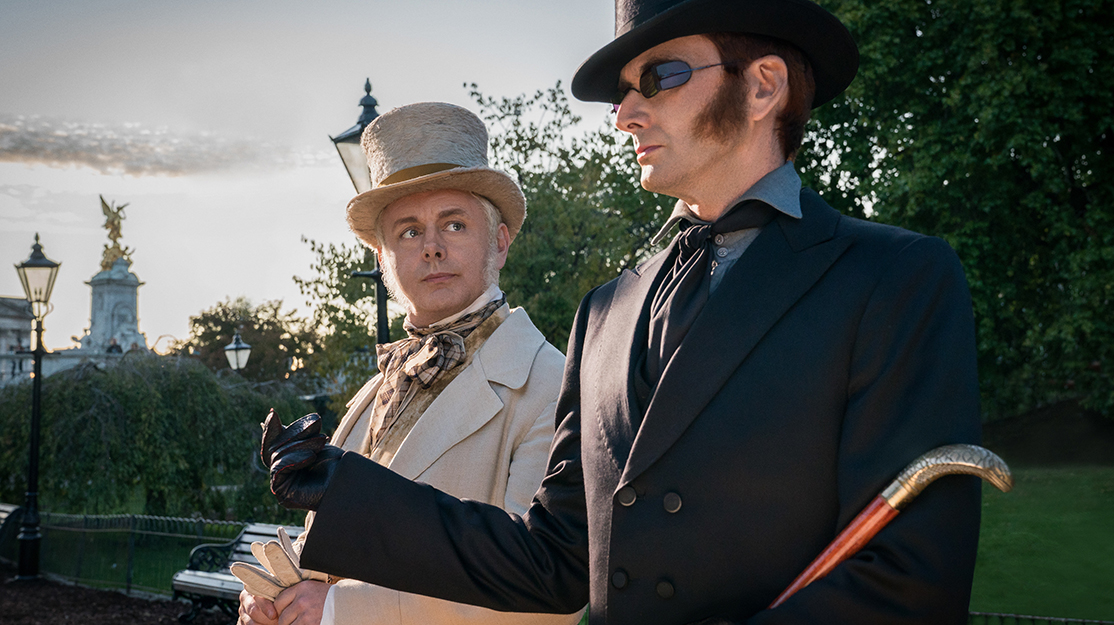 Michael Sheen, David Tennant and the cast of Good Omens reflect on starring in the eagerly anticipated adaptation of the hugely popular fantasy novel, under the stewardship of showrunner Neil Gaiman, who co-wrote the book with the late Terry Pratchett.

It’s a bitterly chilly November day and we’re surrounded by bunkers on the decommissioned RAF base of Upper Heyford in the English county of Oxfordshire, once a nuclear weapons site during the Cold War. It all feels unavoidably appropriate for the filming of Good Omens, the six-part adaptation of Neil Gaiman and the late Terry Pratchett’s apocalyptic comedy. Telling the story of an angel and a demon who, having grown to love Earth, join forces to prevent the coming of age of the Antichrist (an unwitting 11-year-old called Adam, living quietly in rural Oxfordshire) and the End of Days.

Its co-creator is, inevitably and aptly, dressed in regulation black and fizzing with delight at how the shoot, now at its halfway stage, is going under director Douglas Mackinnon. “We have the best cast I’ve ever worked with,” says Gaiman, who is showrunning the series.

After a close shave with Hollywood courtesy of Terry Gilliam and derailed by 9/11, it took the combined financial muscle and creative ambition of Amazon and the BBC for it to come to screen with an astonishing cast in tow, from Frances McDormand as God to Benedict Cumberbatch as Satan, via Anna Maxwell Martin’s Beelzebub and Jon Hamm’s Archangel Gabriel. It is produced by Amazon Studios, BBC Studios, Blank Corporation and Narrativia.

“I knew how much Michael loved Good Omens,” Gaiman recalls, “so I had dinner with him and asked if I could send him scripts. He rapidly came on board and once we had Michael Sheen, everybody else just went, ‘Oh, okay – it’s real.’ I had to talk Michael into being the angel, because you could absolutely have gone the other way with him as Crowley and David as Aziraphale. They love the idea that, if ever we did this as a stage production somehow, they would swap roles each night.”

“I’ve always been interested in how we portray goodness,” says Sheen, looking striking indeed with a bleached blond barnet (“I now find myself going, ‘Ooh, look at my roots!’”), tartan bowtie and flannel trousers. “The stereotype is that it’s fun to play the baddie because evil’s interesting and goodness is just boring. Certainly, there’s something holier-than-thou about Aziraphale, but over the course of the story the edges get knocked off him a bit. For someone who’s eternal, actually he does change as the piece goes on.”

“I didn’t know the book, I’m ashamed to say,” admits Tennant, deeply unsettling with prescription yellow contact lenses (“They’re prescription, which helps”), enormous orange quiff and snakeskin boots. But he has been made aware of the pressure being applied by its authors’ dedicated fans.

“Nina Sosanya [playing Sister Mary Loquacious] said, ‘I would have done anything to be in this. It’s my favourite book of all time.’ That’s the sort of refrain I keep hearing. So of course, once you realise you hold something so precious to people in your hand, you don’t want to disappoint them, while still bringing it to a wider audience. I’m sure some people will be furious and some people will be utterly delighted. All you can do is do your best.”

The presence of one of its creators doesn’t hurt, of course. “He’s like a very kind and gentle surgeon,” enthuses Miranda Richardson, fresh from playing with a “thundergun.” “He’ll come up and say something like, ‘The trick is this…’ or ‘Think about this…’ It’s not that you’re doing anything wrong, he’s just adding to the mix.”

Outside the tent, the towering Death stalks by with a cheery smile, green mask off (and to be replaced by a CGI’d skull in the final edit, along with the voice of Brian Cox), while War waves a fiery sword around. It has started to drizzle, but the mood remains upbeat.

“Laughter keeps you going on days like today,” Richardson adds. She plays Madame Tracey, a medium, part-time sex worker and “generous person.” “She comes from a very good place and becomes a vessel for Aziraphale who at one point is looking for a body and a voice.”

“My character is also a vessel, but more like a leaky canteen,” says Michael McKean, who plays the Scottish Sergeant Shadwell, the last witchfinder standing. “He’s given himself over, because no one else wants him, to the eradication of witches on this earth. He looks upon life with a very jaundiced eye.”

The Spinal Tap star’s accent has been monitored throughout by Scots Mackinnon and Tennant, the latter of whom “commends it to the roof.” Shadwell’s sidekick has also been preoccupied with accents – his quailing mentee, Newton Pulsifer, is played by Jack Whitehall.

“It’s not a posh character – finally!” laughs Whitehall. “In terms of the costume I went down the Harry Potter route in the hope that it would help me put to bed some of the dreams that I still have. I got to use my northern accent for Newt’s ancestor, who I also play. I’ve been honing it for a long time. I always want to throw in a ‘yah!’ but I resist!”

Aria Arjona plays Anathema Device, a descendant of the witch who correctly predicted the end of the world and was burnt at the stake by Shadwell and Newt’s ancestors. The Puerto Rican True Detective actor has found filming in the UK to be eye-opening. “It’s a completely different style of working than in America – a little more technical, and the schedules are crazy, but everything ends up being done. For Anathema, like all my characters, the wardrobe is what gets me there. Once I put the boots on it all fell into place. She has a kind of wire up her spine, a tension which came as soon as I got them on.”

Speaking of tension, the uneasy geopolitical situation has ensured the series, which debuts worldwide on Amazon Prime Video tomorrow before rolling out on BBC2 in the UK, feels regrettably topical. “It’s quite a tonic to come to work and almost be making a joke of the end of the world,” says Tennant. “I think probably we all need to do that. I just pray we make it to transmission…”

“It’s never a bad time to re-establish why it’s good that we don’t all blow each other up,” Sheen concludes. “Good Omens is very British about the end of the world, and there’s something reassuring about that.”