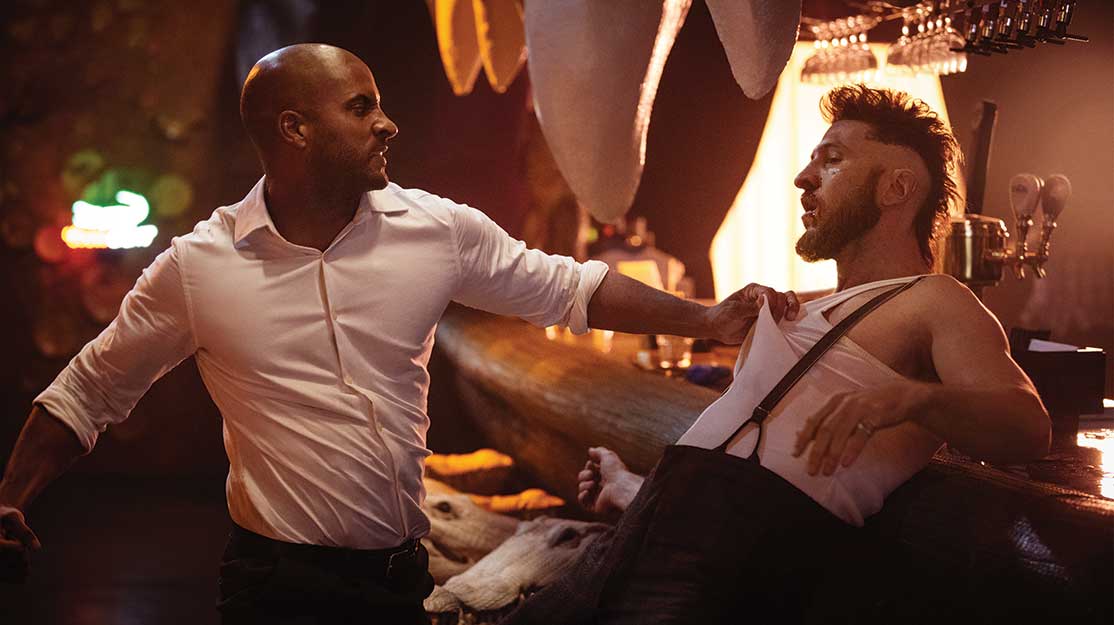 It took just a few days of shooting for executive producer Craig Cegielski and co-showrunner Michael Green to realise they were working on something phenomenal in American Gods.

The confirmation came courtesy of the first scene between the two lead characters, with Ricky Whittle’s protagonist Shadow Moon (pictured left above) meeting his soon-to-be mentor-guru Mr Wednesday (Ian McShane) on a plane. The set was fizzing with chemistry.

It made Cegielski want to be a part of the characters’ crew, while for Green it confirmed his inkling that the two actors would work very well together. “I felt like we not only had a show with a core relationship in it, but a show that would be honoured, and one that I as a fan would continue watching for many, many years to come,”
he says.

This TV adaptation of Neil Gaiman’s legendary fantasy novel, coming to US premium cablenet Starz next year, has been a long time in the making, with the book first being published in 2001.

The plot sets up a war brewing between old and new gods: the traditional gods of biblical and mythological roots from around the world are steadily losing believers to an upstart pantheon of gods reflecting society’s modern love of money, technology, media, celebrity and drugs. Thrust into the centre is ex-con Shadow Moon, who becomes a bodyguard and travelling partner to Mr Wednesday, a conman who is secretly one of the older gods, on a cross-country mission to gather his forces in preparation to battle the new deities.

The book has won awards and become a cultural phenomenon, leading HBO to first express an interest in an adaptation in 2011. But script issues meant this didn’t work out and the network dropped the idea in late 2013.

Then when former Playtone exec Stephanie Berk, who had been developing the project for HBO, moved to producer FremantleMedia North America (FMNA), she reached out again
to Gaiman, inviting him to discuss resurrecting the project.

“Neil sat with us and we talked through everything. He believed in Fremantle and our promise to make the show,” says FMNA’s Cegielski. “We found a good network partner. We found good showrunners to participate. We were true to our word.”

That network partner was Starz, which began dabbling in the horror genre with the launch of Ash vs Evil Dead last year. “Starz has been an incredible partner. They view American Gods as one of their tentpoles for the network and they have done everything to support that,” says Cegielski.

Key to the success of the process thus far has been the fact that everyone working on the series is an aficionado of the novel. “We all know the book, we all love Neil’s writing, we love the poetry of what he does and we’re sitting back as fans saying, ‘We’d like to see this’ or, ‘We’d like to do that,’” Cegielski adds.

Part of that group is Green’s co-showrunner Bryan Fuller. The pair have been on the lookout for another project on which to partner ever since working together on NBC’s Heroes. “We bonded very quickly on Heroes. We were talking for years about working together somehow again and American Gods came up,” says Fuller.

Green recalls not being able to agree to the idea loudly or quickly enough, with both creatives being “incredibly passionate” fans of the book who were excited about the “incredible toy box” Gaiman had provided them with.

“It gives us a fresh opportunity to tell different kinds of stories in a television landscape and talk about things that are really relevant to and will resonate with large members of the audience,” Fuller says. “These things are the subjects of faith, belief and where you put your energies in the world.”

And with Gaiman as an executive producer – as well as writing some scripts – the showrunners are able to make sure every decision they make is in keeping with the author’s vision. “Neil has been incredibly supportive and collaborative throughout this process and the thing Michael and I want to be very careful of is that we are making an American Gods that Neil can be proud of,” says Fuller, conceding: “It’s a tricky alchemy, an adaptation.”

Green adds: “We talk to Neil about an intention for an extended role or for a new character before we put pen to paper and get the benefit of his additions to our additions. It is an incredibly joyful experience.”

One of those extended roles has been given to Bilquis, the goddess of love, who only appears in one chapter of the book but is in all 10 episodes of the first season. Green continues: “Neil will read the scripts when they come in and talk to us about them and every time he’s been appreciative, helpful and additive.”

Gaiman himself has also expanded characters for the visual narrative. According to Green, the author introduced a character called Vulcan, “a god he’s always had an imagination for,” who’ll be found travelling in the southern states of the US.

Beyond the script, recent advances in technology have played a huge part in allowing Fuller and Green to tell the story the way they wanted and realise their vision for Gaiman’s words on screen. “A show like this could not have been made 15 years ago because the technology wasn’t really available,” says Cegielski.

Green adds: “We were fortunate that technology has caught up with Neil’s imagination in terms of presenting it visually. When the book first came out, there were a lot of things suggested that could not have been accomplished on screen.”

Examples include a visual effect called ‘god flesh.’ Fuller explains: “The instances where we meet gods or are exposed to them for the first time, we have a camera rig that we shoot the actors with and are able to re-skin them in a wide variety of ways that is tantamount to motion capture.”

Green adds that this allowed them to create several different layers of reality. “We can meet a character who is actually a god, having a very mundane terrestrial experience and then we can pick and choose our moments to show what they truly are underneath it all,” he says.

Cegielski goes further: “It gives us an opportunity to provide a view behind the curtain of what gods look like in their godly state.”

While Fuller says technology has been a “friend” to production, he also notes that around 60% of the filming took place on location. Green says making the magic in the show feel like it could exist in the real world was key, “so the more you can be in the actual world, the better.”

This led them to such locations as Oklahoma. “We spent a lot of time driving on the open road in a Cadillac and those are some of the most fun and beautiful times,” Green says. With the book depicting numerous road trips, the creative crew were constantly seeking new spaces and locations, something Green adds was akin to filming an hour-long movie for each episode.

But what of the show’s leading man? Whittle, best known to UK viewers for his five-year portrayal of Calvin Valentine in teen soap Hollyoaks, will be familiar stateside thanks to his role in post-apocalyptic drama The 100. And now he’s proving his chops among the Hollywood heavyweights that pepper the rest of the American Gods cast.

Noting that the actor brings joy and gratitude to the process, Fuller describes Whittle as a “whirling ball of hugs and smiles – exactly what you want in a lead on a show.”

Green also praises Whittle’s efforts in beefing up for the part of Shadow: “He has undergone a really difficult physical transformation for this. Shadow is much physically larger and more menacing so he had to put on 36lbs, eating meat stew and rice for breakfast for the last six months.

With a stellar cast – including The X-Files’ Gillian Anderson, who previously worked with director David Slade and Fuller on Hannibal – location filming and technological wizardry, Fremantle is pulling out all the stops with this big-budget production.

Cegielski says: “You can’t under-deliver this. Every person who comes on board to work on the show is trying to elevate the material in every aspect because the fans deserve that kind of treatment.”

The executive producer adds that he has been working closely with Fuller and Green on set, as Fremantle has always been a “boots on the ground studio. We want to make sure the people we work with feel like we’re partners, as opposed to suits.”

While season one of American Gods covers approximately one-third of the book, the creative team believe the show could last for seven seasons – surely music to the ears of international distributor FremantleMedia International, which has sold the show to Amazon Prime in Germany, Austria, the UK and Japan. “The novel offers us somewhat of an unlimited opportunity to tell the story,” says Cegielski. “American Gods is best served as a television series and Michael and Bryan are doing an incredible job navigating that.”

An integral part of the team is director Slade, who Green and Fuller brought in because of his strong visual style, narrative sense and his ability to bring the best out of actors. Together, they thought carefully about how to represent the old and supernatural worlds.

Fuller describes the visual style as “grounded magic and sometimes untethered magic,” while Cegielski says there is a balance between “a very grounded, visually aggressive palate and whimsical, funny and irreverent elements.”

It is also a case of two showrunners being better than one with Fuller and Green, with the latter believing the collaboration means the show has become more ambitious than it would have been under a single showrunner.

Fuller says: “The fun challenge of this show is to make people believe the world has more in it than they could ever have imagined and is full of wonderful, supernatural elements.”

Perhaps by the time American Gods launches in early 2017, this creative trio will leave viewers feeling like they’re walking on hallowed ground.