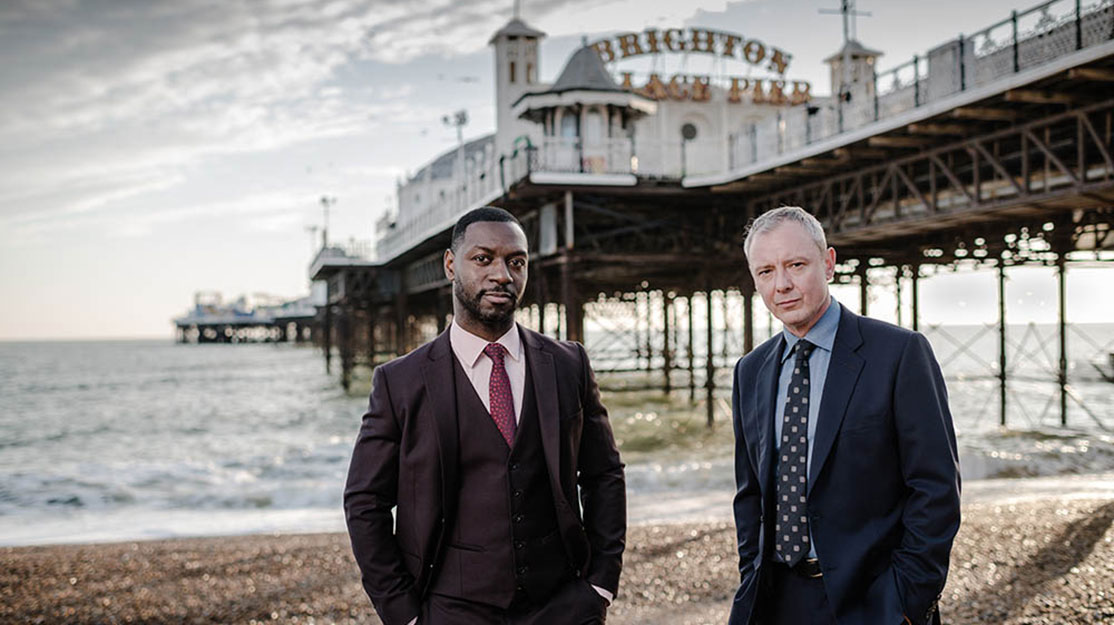 John Simm takes the lead in Grace, the ITV adaptation of Peter James’ series of novels about Brighton-based detective Roy Grace. DQ hears from the cast and production team about filming the two feature-length dramas.

To watch Grace, ITV’s adaptation of Peter James’ Roy Grace detective novels, is to be reminded of a time before the coronavirus pandemic. Offices are bustling places of work, streets are full of pedestrians and Brighton’s famous beaches and bars are as lively as ever.

As one of the first British dramas to start production after the first UK lockdown last spring, it was all part of the production team’s ambition to set the two feature-length films in a world without Covid-19.

“The brief from ITV was this needed to be a real Covid-free world. We didn’t want to see background artists with masks on, we didn’t want to see signs outside shops and social distancing,” says executive producer Paul Sandler of Second Act Productions. “A great deal of thought went into the protocols and the processes of how we could deliver this safely, because obviously that must be the top priority for everybody, and the whole team really pulled together and worked under some very difficult and stringent conditions.”

On set, that meant the crew was broken up into small bubbles, while different groups would have access to the sets on rotation in between takes.

“Despite that, what we’ve made looks like it’s shot in a totally free world and, thanks to everyone’s real perseverance and professionalism, we managed to pull it off,” Sandler continues. “But there were certainly some very stressful moments, particularly at the beginning. It was more expensive and we had to go back to the financiers, rework the budget and find some additional funding because it’s a slower, more difficult process.

“There was a lot of care taken around trying to kill the virus on locations; we had hand-sanitising stations everywhere. It was a real challenge and an absolute credit to the to the team who were on the ground pulling it off.”

Starring John Simm as DSI Roy Grace, the show is produced by Second Act Productions, Tall Story Pictures and Vaudeville Productions, with ITV Studios distributing. It comprises two feature-length dramas based on the first two James novels about the detective, Dead Simple and Looking Good Dead. They introduce Grace as a hard-working but unorthodox police officer who has given his life to his job.

The first film, which debuts this Sunday, sees Grace running enquiries into long-forgotten cold cases while still fixated on his wife, Sandy, who vanished years earlier. When a stag-night prank goes wrong, DS Glenn Branson asks Grace to help investigate the events that led to the disappearance of the groom three days before his wedding. The second instalment is due to air later this year.

Fellow exec producer Andrew O’Connor says the key challenge in developing the series, which was first announced in December 2019, was finding the right person to adapt the novels.

“Over the last 10, maybe 15 years, people have tried. There have been six or seven adaptations and no one really got it right,” he says. “When Peter came to me and said, ‘Do you want to develop it?’ I was obviously thrilled, honoured and humbled by it. And then it was really about who the writer would be.”

One name that kept coming up in conversation was Endeavor creator Russell Lewis, but O’Connor was told he was too busy for another project. However, after his son bought him a Grace novel as a Father’s Day present, the writer was swayed by the source material, which stands up as a thriller rather than a traditional whodunnit.

“These are not normal crime procedurals. Russell talks about them as rollercoaster rides,” O’Connor continues. “Although Russell didn’t have a lot of time, he just couldn’t say no. We waited a long time for Russ. We waited two years for him to be fully available and then Russell’s first thing was to try to honour the books; to try to do a very faithful adaptation.

“Peter loved Russell’s first draft, and the two of them got together and made some changes and turned it into this brilliant script that ended up attracting an amazing cast. The key thing is we just got so lucky that Peter and Russ got on, understood each other and worked so closely together.”

As well as the novels’ characters, Lewis has also remained faithful to the seaside setting. “The texture of Brighton that Peter captures – the Regency grandeur next to [shopping and restaurant area] the Lanes and then the real underbelly Brighton has as a seaside play town for people to come and holiday and to be a bit naughty – has been a real joy to see develop in the scripts,” adds Tall Story exec producer Patrick Schweitzer. “Russell’s done a wonderful job.”

Alongside roles in series such as Doctor Who and Collateral, Simm is no stranger to playing police officers, most notably in Life on Mars and Prey. Even so, the actor describes the role of Roy Grace as “manna from heaven,” despite not previously being familiar with the character.

“It’s not a genre I would read normally,” notes Simm, whom James claims looks like the Roy Grace of his imagination. “I was actually doing Macbeth when they called me and I was walking past [bookshop] Waterstones, so I put my head into the shop and there he [James’ work] was. I devoured the first three very quickly and I was absolutely hooked. I’m on book 10 at the moment.”

Simm says he has a fascination with the fictional detective: “He’s pretty inscrutable. He’s a brilliant cop. He’s had a wonderful career and also he’s been visited by tragedy with his wife going missing. And for such a brilliant detective, it’s so ironic that he can’t solve that, so that’s always hanging over him. He uses strange methods but he just wants to get the result. That’s it. He doesn’t care about what people think. Having said that, he’s not a maverick or anything. He’s just a really good police officer.”

Branson, meanwhile, is played by Richie Campbell, who says he was drawn to the partnership between his character and Grace, noting the respect they have for each other despite Branson’s obvious unease at some of Grace’s methods, such as his frequent visits to medium Harry Frame. Then when filming started, he admits he wasn’t initially sure how production during the pandemic would play out.

“I like the hands-on approach. I like being like, ‘Let’s try this. Let’s try that.’ Because of all that was stripped back, I was wondering if we were going to be able to create what we have on screen now, but it becomes second nature,” he says.

“Everyone just embraced it and they worked really hard to make sure we were Covid-free. Even rehearsing with our masks on, that was a big issue for me. In the beginning, I was thinking, ‘I’m not going to be able to hear the director. We’re not going to be able to discuss points and try to change things up.’ That wasn’t the case at all. If anything, it enhanced it a little bit. We were able to really hone in on certain scenes and go, ‘Right, let’s do this. Let’s do that,’ because we were so focused. It started off quite hard for me, personally, but it became second nature to us. It really did.”

Another character unhappy with Grace’s lack of adherence to the rules is ACC Alison Vosper, who is keeping the detective away from active duty until Bronson brings him on to the stag-party case.

“She’s the boss,” says Rakie Ayola (Noughts & Crosses), who plays Vosper and previously shared scenes with Simm on true crime miniseries Code of a Killer. “She’s managerial. She’s in that organisational role, and she admires and respects Grace very much. She knows he’s a good detective. What she doesn’t love is his unorthodox methods because she has to explain them to the people upstairs and to the press. Even when they work, even when he’s made the right call, as far as she’s concerned, policing is not a spiritual, new-age profession. She has no way of spinning the fact he often does what he does and that frustrates her because he often puts her in a difficult position.

The actors are all pleased with the diversity of the cast, which Campbell says helps the series stand out against the sea of other crime dramas on air.

“It’s a good representation of the country and it is a good representation of Brighton as well,” he says. “Just going to Brighton, you can see the diverse pockets of students, you see the older generation, you see a whole melting pot of people. That’s what’s quite appealing about this show. It’s glossy, but also has the elements of why we all love crime drama. I don’t know any other show that has all of those elements in it, and it doesn’t feel like it’s just put in there [for the sake of it]. It’s real.”

Simm believes James’ bestselling books will also help draw viewers to the drama, whether they’re familiar with the novels or not. He also thinks the full Roy Grace series could one day be brought to the screen. Book 17, Left You Dead, will be published in May.

“The thing that sets this apart is the quality of the source material and the quality of Russell’s scripts,” he says. “I would watch that. Even if I had never heard of Roy Grace, I would think, ‘Well, this is obviously quality material.’ And we’ve got a brilliant screenwriter, one of the best. I’m a voracious reader and the writing is everything to me. That would sell it to me. I would think, ‘OK, this should be good.’”