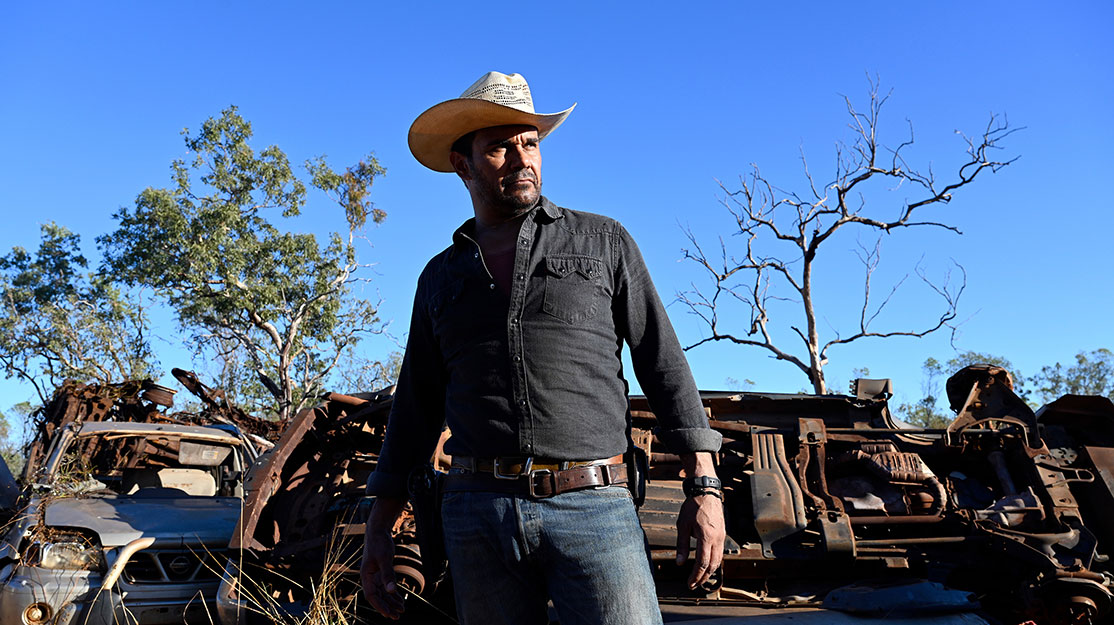 When Swedish star Sofia Helin (The Bridge) was offered the chance to co-star alongside Aaron Pedersen in the second season of Australian drama Mystery Road, it wasn’t a difficult decision.

“I wasn’t supposed to be doing anything because I had been too busy, but then this came along,” Helin remembers. “I watched Aaron’s two films [in which he played Mystery Road’s main character before the series was created] first and I was so blown away. This man is one of our biggest actors. That’s the truth. I’ve never seen anyone doing a portrait of an alcoholic like Aaron. You have to see those two films. Then I saw the first season and my husband said, ‘I’m sorry Sofia, you need to go.’ It was not a hard decision. It was a lovely decision.”

It has been a long journey to this point for Pedersen and his character Detective Jay Swan, who first appeared in writer/director Ivan Sen’s 2013 film Mystery Road, about an Indigenous police officer who returns to the outback to investigate the murder of a young girl. He reprised the role in Sen’s 2016 follow-up Goldstone, in which Swan arrives in the eponymous town ostensibly to solve a missing-person case but ends up unravelling a web of conspiracy and lies.

Then in 2018, the character moved to television in the Mystery Road series, which is set in the time between the two films. Season one sees Swan working alongside Judy Davis’s police sergeant to solve the disappearance of two young farmhands from an outback cattle station, leading them to uncover drug trafficking and a historic injustice that threatens the fabric of the community.

Earlier this year, following its world premiere at the Berlin International Film Festival, the second season of the atmospheric and visceral series premiered on Australian broadcaster ABC. This time, the discovery of a headless corpse leads Swan to take on a grisly case in a coastal town to be closer to his family, but he soon uncovers secrets, lies and a dangerous new enemy.

The Bunya Productions series scooped a number of awards for its first season, most notably being named best television drama at both the Australian Academy Awards and the Logies, with Pedersen also twice scoring best actor nominations. All3Media International is the distributor.

“It’s interesting because the first film, Ivan wrote for me, and then I wanted to do a second one. But we had this chasm between the last shot of Mystery Road and the first shot of Goldstone, and a lot seemed to have happened in between,” Pedersen tells DQ about the origins of the series. “I’m standing with my family on the side of the road at the end of Mystery Road, and then Goldstone opens and I’m very drunk, being pulled over by a police officer. There’s this chasm of life that had taken place. We said, ‘Let’s put the TV series in between the two films.’

“I knew there was a lot to play with because there were a lot of questions being asked about what had happened to Jay, what the journey was and what happened to his personal life, because it looked like, at the end of Mystery Road, things were going alright [for him]. It looked like he was going to get his family back together. Then when we started Goldstone, it looked like it had fallen apart.”

With the story of Mystery Road unfolding between the films’ time periods, the challenge for Pedersen comes in taking his character to the point at which he appears in Goldstone. But the actor says every story that features Swan is also a “conversation” between the character and Australia, examining the country’s history of colonisation and brutal treatment of Aboriginal people.

“It’s about how we treat each other and how we belong in each other’s world, but how we also see ourselves in that world, whether we accept it or whether we don’t,” Pedersen explains.

“That’s a big part of it. Australia has always had a silent history and likes to not talk too much about the past, because it’s a dark history. But then, the world over, humans are like that anyway. I just love the fact that we get to have that conversation with Australia. We don’t like to force-feed people, we don’t like to signpost [issues]. I always treat my audiences intelligently, because I believe that when you do that, they see that and they take away something you would never even have thought of within the structure of the film or the TV series.

“Our stories are long overdue; they have never been told, and it’s about time. People have an appetite for it. They want to hear our side of the story. We’ve got interesting stories, and the storyline that crosses over with Sofia’s is very interesting.”

In season two of Mystery Road, Helin co-stars alongside Pedersen as Professor Claire Sims, an archaeologist carrying out a dig at a sacred site.

“If you sacrifice your home, family, life and friends – everything – and you stay in the Australian outback for months and years, you need to find something significant,” she says of her character. “In the end, she almost does everything to find something, because she gets greedy. Then she has to struggle with her conscience. It’s an interesting journey to go on.

“I imagined, ‘What if someone would come and dig up our graveyards? What would we say?’ I mean, it’s quite crazy to do that. At the same time she’s working, she has a group of protesters from the Aboriginal community around her. She thinks she’s doing the right thing and that she’s good. But she realises during the story that she’s not good, and there’s something criminal involved. The present and the past are crossing, and that puts her under pressure.”

Pedersen describes the storyline as “brain versus heart,” with Helin’s professor using her scientific background to claim what she is doing is right, while those who have lived on the land for generations believe it’s wrong.

“With archaeological digs and with repatriation [of land to Indigenous communities] and stuff like that, there’s certainly going to be an argument for the ancestors, first and foremost,” he continues. “In past times, there’s never really been an argument for them, as somehow it belongs to the science. But then isn’t that our burial ground, doesn’t that belong to us? That was a burial ground before it became an archaeological site. I find that storyline really complicated, actually. It’s an international conversation.”

Helin says she’s never had a friendlier working environment than her three weeks filming in Broome, where she was welcomed with a traditional ceremony led by an Aboriginal community leader. Shooting was done out of chronological order, allowing Helin to fly in and complete her scenes in one block.

“The atmosphere was so friendly, so calm and so respectful – and so unstressful,” she says. “I asked the producers and the directors, ‘How do you do it?’ because it’s the ideal situation to have if you want to create something. Stress just destroys everything. I was super impressed.

“It was so hard to come back [home]. There’s something called ‘Broome Time,’ where time is not something that disappears. You don’t have to stress about everything. There’s even a line in the show that says, ‘There’s no such thing as time,’ and that’s so interesting to think about. When I got home, I started looking around, and we’re all in this prison of time. It’s crazy. The interesting thing is, even though we didn’t stress, we managed to get it done, and that was a magic trick. It was an inspiring and important cultural experience.”

Meanwhile, Pedersen says there are still more things he wants to say and more conversations he wants to have via his character, meaning Mystery Road 2 won’t take Detective Swan right up to the time explored in Goldstone.

“Ivan wants to do another film. They’re already in the writing room for the third season. We’re moving forward with it,” he reveals. “There are conversations I want to have with the country. I’m trying to make the next generation live stronger and better than the last, and that’s through storytelling, because a lot of people didn’t have these stories before. Now they have them. Jay’s come alive. It was just one film at one point; now, there’s a second film, a second season, and we’re doing another film and talking about another season.

“In Goldstone, I have lost my daughter, so when we reach [that point in the series], they’ll play with the darkness of it all. And I’ll be ready for it. I don’t get tortured by it. It’s very cathartic. It’s therapy in some ways.

“I feel like if I’m giving it to people and sharing it with people, I’m not wasting my time. For some reason, a lot of people are taking something from it, and that’s the strength of art. Otherwise, you do torture yourself. I’m never tortured by my characters. My characters are very dark, but they make me very light. I feel lighter every time I do something; I feel wiser.”

With networks around the world picking up Mystery Road, Pedersen says there’s one message that needs to be shared: “Respect land, respect people,” he concludes. “That’s probably the big thing in it. That’s what we don’t do enough.”