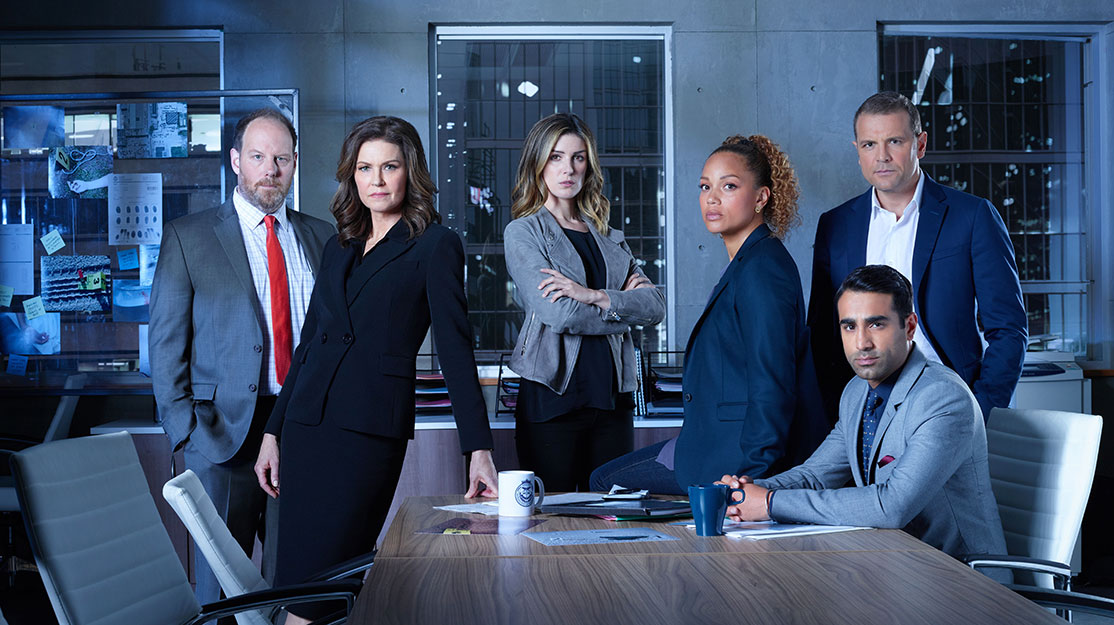 All in The Detail

Angela Griffin and Shenae Grimes-Beech team up to star in Canadian detective drama The Detail. They tell DQ about playing cops and the chance to join a female-led production.

The Detail could not be more timely. As the fallout from Hollywood’s sexual harassment scandal continues, alongside the #MeToo and Time’s Up campaigns and the row over gender pay inequality, this Canadian crime series stands apart as a female-led production.

Starring Angela Griffin, Shenae Grimes-Beech and Wendy Crewson, the story details the messy realities of cop life – both on and off the job – for detectives who work tirelessly to solve cases while navigating the complicated demands of their personal lives.

When DQ sits down with Griffin and Grimes-Beech, it is seven months since filming wrapped on the eight-part series, which launches on Canada’s CTV on March 25 and will air on ION TV in the US. But Griffin explicitly remembers her excitement at the first read-through for the show.

“It felt like the start of something really special,” she says. “There was such a good vibe about the whole job, which stayed for the entire job. There was such a good energy about it. It’s exciting being in a room full of women, I’ve got to say. Being sat around a table where I’m not the girlfriend or the wife was super cool. And then you’ve got all these great female directors and producers.

“I think it’s amazing but I also think, ‘Yes, it should be.’ I almost don’t want to big it up too much because that should just be the norm, but I’m really proud to be part of the show and part of something that is getting it right.”

Grimes-Beech picks up: “That’s one of the things I think we all loved about the show so much. It’s never, like, the female boss. It’s never something that is punctuated. It just ‘is,’ because why the fuck wouldn’t it be? Why shouldn’t women be treated as complete equals? It’s a laughable concept to think that’s not a reality for a lot of people.”

That work-life balance is a key element of the series, which sees procedural crime-of-the-week storylines play out against the backdrop of the detectives’ individual family lives and examines how the cases they face impact their home life.

It’s what makes The Detail stand out for Griffin, who says she wants to see characters on screen juggle the daily demands she faces in her own life. “And I actually really like it when people don’t handle it, because it is impossible,” she admits. “I thoroughly enjoy watching imperfect lives because it makes me feel better about my own. It makes me feel like I’m not a complete failure. Certainly for Stevie, she doesn’t get it right all the time when it comes to that balance. Going forward, I’d like to see her struggle more with it, because sometimes she does manage to pull it out of the bag. I’d like to up that ante a bit more.”

Grimes-Beech, meanwhile, prefers the crime element of the series, which she says she finds fascinating. “I don’t often watch dramas that are strictly about people’s personal lives but when I watched our preview back, I enjoyed the personal stuff because it really gives you something to fall in love with your character for. People are going to fall in love with the characters as well and that will keep them hooked.”

That’s not to say that the police element wasn’t important too. “I loved it,” Grimes-Beech says about the opportunity to play a cop. “One of my favourite moments was where we were busting into a trailer and we had our army dude on set with us and he was walking us through how to do it properly. It was so cool, it makes you feel so official.”

For Griffin, the opportunity was amped up by the chance to have a gun, something British crime dramas notably lack in comparison to their North American counterparts.

“I have wanted to be a cop with a gun for ever,” the actor says, noting that the only props she was allowed as DS Lizzy Mannox in ITV drama Lewis were a notepad and pencil. “As an actor, it doesn’t get much better for me. I’ve got personal stuff, I get to cry in a corner, I get to shoot people, I get to shout at people, I get to be a mum. Some people don’t want to do that; for me as an actor, it’s everything I have ever wanted.”

That wasn’t the only difference on set for Griffin, who is used to a vastly different production schedule on British shows such as Brief Encounters and Ordinary Lies. “It’s bizarre that two countries that speak the same language, that have similar-sized industries, could work in such different ways,” she muses. “The unionisation of the industry in North America as a whole makes it massively different. So certain people can’t do other jobs or double up on things – even the drivers have to be from the drivers’ union. You can’t just nip in a car with an AD [assistant director]. And they have hair and make-up – two people. In the UK, the make-up does the hair and that’s just really normal. It differs on so many different levels but I like both ways of working.”

In contrast, it was a much shorter shoot than usual for Grimes-Beech, who is more used to the year-long effort needed to produce a 22-episode season of a US network drama, such as The CW’s 90210. After five years on that show, and a five-year stint before that on DeGrassi, she’s since mixed things up with a range of feature and TV films. But with the small screen stronger than ever, the actor is happy to return to a potentially long-running series that affords her some security and the chance to pick up other projects on the side.

“While there’s no stability for an actor, I feel like a TV show is as close as it gets and I have so much appreciation and gratitude for a job like this that I didn’t have when I was young,” she says. “When you fall in love with a character and a show as much as I have with this one, you wish it will run forever. That’s not often the case.

“Back in the day, like five years ago, we all wanted to break out and do movies so badly that an Oscar was the ultimate dream. Now you’ve got Oscar winners on TV shows all the time – look at the cast of Big Little Lies. Are you kidding me! It’s mind-boggling and that’s not something anybody in the industry would have said would happen five years ago. With film, unless it’s a Marvel movie or whatever, no one’s making any money. Those are passion projects and TV allows you to fulfil those passions on the side without having to worry. It’s a different climate in the industry.”

For Griffin, it’s not lost on her that she has had to cross the Atlantic to find a leading role, following in the footsteps of other black British talent such as Damson Idris, Idris Elba and Oscar nominee Daniel Kaluuya. “There’s some great stuff being made [in North America] and a lot of our British, particularly black British, talent is scoring really well out there,” she says, adding that there’s a simple way to ensure more black and ethnic minority talent can pick up leading roles. “Just see people for the parts,” the actor concludes. “It doesn’t have to have the word ‘black’ before it to have someone audition for it. You just open up your casting for everybody and you let everybody come.

“I love the fact I’m doing this show, I absolutely love it and it’s so exciting to be in Canada and I feel really lucky to have it. It would be quite nice to do a series in the UK where I can be one of the leads and see my children every single night and have the same depth, and I’m slightly sad I’ve had to go across the pond to do it.”