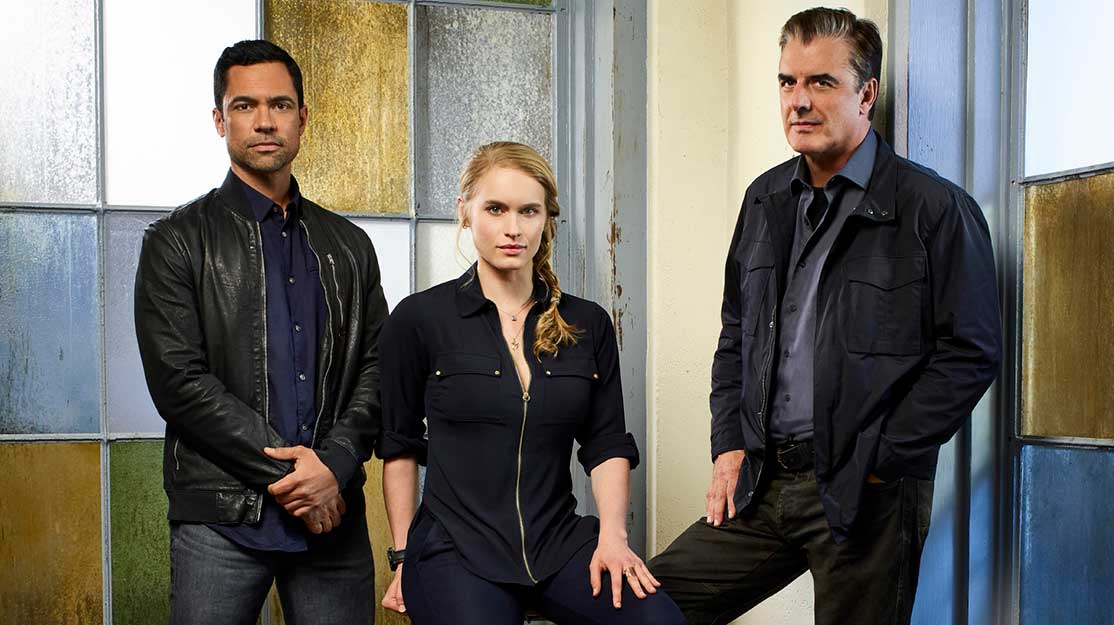 Chris Noth, Leven Rambin and Danny Pino explain why US crime procedural Gone stands out from the crowd – and recall filming a tough fight sequence between two of the leading trio.

Gone tells the fictional story of Kit ‘Kick’ Lannigan, the survivor of a famous child abduction case, who is recruited by Frank Booth, the FBI agent who rescued her, to join a special task force dedicated to solving abductions and missing persons cases. Commissioned by Germany’s RTL and TF1 in France, it is produced by NBCUniversal International Studios and distributed by NBCUniversal International Distribution. It has also been acquired by US cable channel WGN America.

Chris Noth, who plays Booth: Every law enforcement show has its own unique and distinct voice and this one is a bit more disturbing. To be an FBI agent in this unique way takes a certain mindset and it also articulates who Frank is. At the beginning of the series we haven’t gotten into each character’s total history yet but there’s a side of Frank that drives him to this kind of work. As we evolve, I hope we’ll get more into that. I really liked the way all the characters’ pasts are interlaced so that each episode articulates that.

Danny Pino (former Army intelligence officer John Bishop): Gone is really about character. When we’re talking about differentiating procedural cop dramas, Law & Order does a very good job of thrusting the case to the forefront. But what attracted me to Gone was the backstory, certainly with Bishop. That onion is peeled very slowly, and you find it’s then reflected in the case. We’re able to bring some of that baggage so the case isn’t stale or dry. It’s not just something we’re going through rudimentarily to fulfil our occupation. This is something very personal to the characters – certainly it is for Kick from the very beginning. When I read the pilot, I knew Bishop was going to reflect that rawness effectively and I thought this was something I was interested in exploring.

Leven Rambin (Lannigan): I saw this as a 1,000% hardcore black drama because I went crazy in my actor mind. I worked with a real-life survivor – she’s just normal, you wouldn’t know that she’s been tortured and gagged and the things that were done to her. Once I met her, you need to add in that she’s just a normal girl living life. And Kick has a good personality as well. Moments of lightness are really important. Those progress more as the show goes on, which I’m really happy about, because at the start I was like, ‘Let’s make it really dark all the time,’ but that’s not appealing to anyone.

Bishop and Kick are introduced in episode one when he visits her gym looking for self-defence lessons, leading to a fight sequence between the pair that ends when Frank enters and reveals Bishop’s real intention was to test Kick’s skills before he and Frank recruit her to their new task force.

Pino: We rehearsed that a couple of weeks before we actually started shooting. We started rehearsing in LA and the trainers were teaching us how to fight for the camera. Then we showed up two weeks before production in Pittsburgh. We were doing pure choreography, which Leven picked up in a heartbeat. She was ready to fight. Then I pretended I was ready, but I really wasn’t.
We shot each episode in seven days, which is one day fewer than most procedural cop drama episodes take. And when you add action to it, it’s very challenging so we had a very truncated time to shoot in. The director, John Terlesky, said, ‘Now we need to get this [fight scene] in about two hours,’ and he was looking at his watch. I said, ‘Let’s break it up,’ but he said, ‘No, let’s just run it.’ And we ran the entire fight the first time we filmed it. I think Leven punched me three times, and I managed to graze her as well. We ended up running the entire fight five or six times and our stunt doubles just stood there. They did a throw but, at the end of the day, the editors came up to us and said they only used 2% from the stunt doubles, so most of that fight is just us swinging at each other and kicking at each other. That was really fun. And that’s different for a procedural cop drama to have that much action.