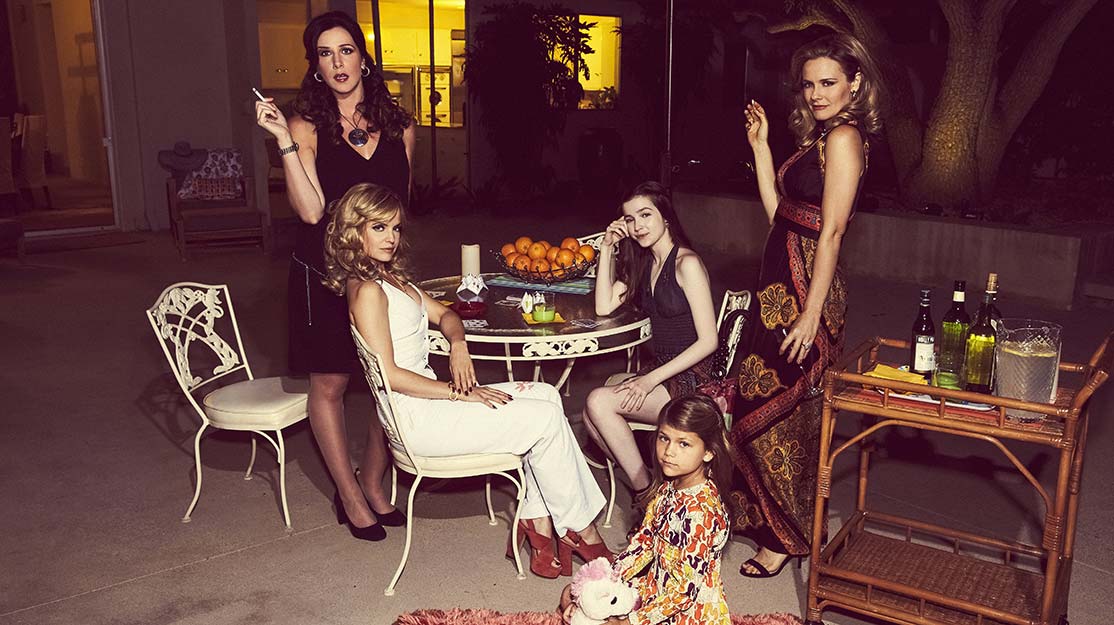 In Paramount Network original series American Woman, Alicia Silverstone, Mena Suvari and Jennifer Bartels fight for their independence in 1970s LA. DQ talks to Bartels about the dramedy’s contemporary parallels and the trio of women at its heart, and discovers an alternative use of mushroom soup.

As part of the promotion for her forthcoming dramedy American Woman, actor Jennifer Bartels spent a day updating Wikipedia articles to highlight the recently revealed statistic that only 16% of the online encyclopaedia’s editors identify as women. The event is part of a campaign to empower women to raise their voices – a key theme in the Paramount Network series.

Inspired by the real-life upbringing of Kyle Richards, a star of reality series Real Housewives of Beverly Hills, American Woman follows Bonnie (Alicia Silverstone), an unconventional mother struggling to raise her two daughters after leaving her husband in 1970s LA. Bonnie also comes to rely on the help of her two best friends, Kathleen (Mena Suvari) and Diana (Bartels), as they each discover their own brand of independence in a glamorous and ever-changing world.

From watching the first three episodes – the series debuts in the US on June 7 – it’s clear many of the issues in the 70s-set show are still in play four decades later, most notably surrounding Bartels’ character Diana, a bank worker trying to fulfil her ambitions in a male-dominated environment.

“Try working twice as hard for half the recognition and a quarter of the pay,” she tells Bonnie, as Silverstone’s character sets out to stand on her own two feet after leaving her cheating husband.

Bartels is in no doubt that many of the messages in American Woman transcend time. “1975 was a while ago but, after playing Diana and being where we are now socially, you realise so many things have changed but so many things haven’t,” she says. “I think I learned a lot. I learned about sexual harassment in the workplace and how in the 1970s it wasn’t even regarded as a real issue. So to think it now actually is, it’s cool to think of where we’ve come as women and as a society, but there are a lot of things that unfortunately need work. It’s eye-opening to see how far we’ve come but how far we have to go.”

That need for change is even more apparent today, following the #MeToo and Time’s Up movements that were born out of the sexual harassment scandal that swept through Hollywood last year. It was a big first step, Bartels says, but she admits more work needs to be done.

“It was really wonderful, brave and honest for women especially, and under-represented people, to come up and say, ‘Hey, this happened to me,’ and to be heard. That’s the biggest first step, but we can’t just sit with that and say, ‘OK, now we’re good, right?’ It’s something that continually needs work to create awareness so we don’t go back to that. But even as an actress in this industry, it feels like we’re walking into a new space and it feels a little more equal and a little more safe, which is great.”

Bartels was coming off ABC comedy Broken, which she co-wrote and executive produced, when she was invited to audition for the role of Diana. With Silverstone and executive producer John Wells (The West Wing, ER, Shameless) already attached and the chance to play in the 1970s, it was an opportunity the actor didn’t want to miss. John Wells Productions is behind the series in association with Warner Horizon Scripted Television.

“I come from theatre and I do a lot of comedy so this is a nice stretch for me in the sense that I haven’t really flexed this muscle as much as others,” she says. “So I went in and read and it went very well, and then it kind of happened. We shot the pilot at the end of 2016 and shot and wrapped the show last summer, so it’s been a while. Fortunately, but also unfortunately, things shifted in Hollywood last year so it is so timely. It has a nice relevance to it.”

Bartels says she clicked with Silverstone (Clueless) and Suvari (American Beauty) straight away, and it’s that chemistry that holds the series together. The central premise may concern Bonnie’s journey into independence, but the 12-part show looks at all three women and how they overcome the problems they face.

Within the triumvirate, Diana immediately stands apart. Initially seemingly stuffy, boring and uptight, she portrays herself as a powerful working woman. But as the opening episodes unfold, this appearance unravels to reveal someone struggling to impose herself.

“At first, you’re like, ‘She’s strong, she’s independent, she’s assertive but aggressive,’ but I think it’s out of necessity,” Bartels explains. “There are times maybe she doesn’t want to be that way, she doesn’t want to have to work. She sells herself on the idea that she has to, so she’s going to do it and she enjoys it. But I think there are a lot of motives behind the ‘why’ and why she has to do this for her life.

“Over time, you find everyone’s struggling to find their voice or their footing in this time period, especially as three single women. It’s interesting to see where Diana goes. It was so wonderful that they trusted me to take this character. Expect a lot of interesting choices, sexy choices. I think Diana becomes a little more comfortable in her own skin, but she has to lose herself a little bit to find that.”

The moment she loses herself can be pinpointed to a scene in episode three where, at a house party and desperate to prove she can be fun, Diana mixes cocaine and quaaludes with lots of alcohol.

“When we meet her in the pilot episode, she’s in a shell like an onion and by the third episode, you start to peel off these really luscious layers of her character,” Bartels says. “There’s a lot of pain there, and reckless behaviour usually comes out of trying to escape pain or worry. So we start to see a little more of what she’s willing to do to prove she is fun, and a lot of times it goes overboard. She really is an honest woman that’s trying to play the game the best she can in a world where the game is so unfair.”

That episode also has a standout moment for Bartels as Diana climbs onto a roof to deliver a monologue, before plunging into the swimming pool below, surfacing and immediately vomiting – in reality spewing out cold mushroom soup – in front of the watching crowd of partygoers.

“The pool scene was great. Just as an actress, it was so cool,” she says. “You crawl up eight feet and there’s a man that held me and rigged me in. He wore a blanket over himself and sat up on the roof. I do this monologue and then the stunt double actually jumped off the roof. So when it cuts back to me, I had to jump into the pool from the edge, put vomit in my mouth, swim underwater and then pop up out of the pool, swim with the stuff in my mouth, then vomit and hoist myself out. We did this take about 20 times. They made it look so fun, and it was fun. It was also a bit of an orchestrated dance to get that shot, but I’m so pleased with it. It really opens up a new layer to my character.”

As the series progresses, Diana’s character is enhanced by her connections away from Bonnie and Kathleen, as viewers learn more about her relationship with her mother and her boss.

“There’s also some really provocative stuff they wrote for Diana that really challenged me. I felt really supported and safe to do it and I was really pleased in how it turned out, so it was great from an acting perspective,” Bartels reveals. “Diana starts off as this buttoned-up working woman and she ends up taking us for a ride and maybe losing a few buttons.”

As for the actor herself, Bartels is taking the initiative and writing her own projects that she hopes to use to create awareness of social issues and women issues. Whether she stars in those projects is not a concern, so long as she does work people can relate to.

“I also think it’s important to not wait as an actor but to write and create your own opportunities for the things you believe in or for your voice, because this town is hard. So the more hands you have in the pot, the more opportunities you have to create change – the change you want to see,” she says.

“Part of being an actor is having a voice to create change. Over the last few years, even before the movement of last year, I realised becoming more comfortable in my own skin has leant itself to realising the things I really want to tackle and write about or be attached to. That’s being relatable and inspiring others, especially women and people who have dealt with some hard stuff in life. It’s something that has really inspired me to keep going and hopefully make a difference for others.”