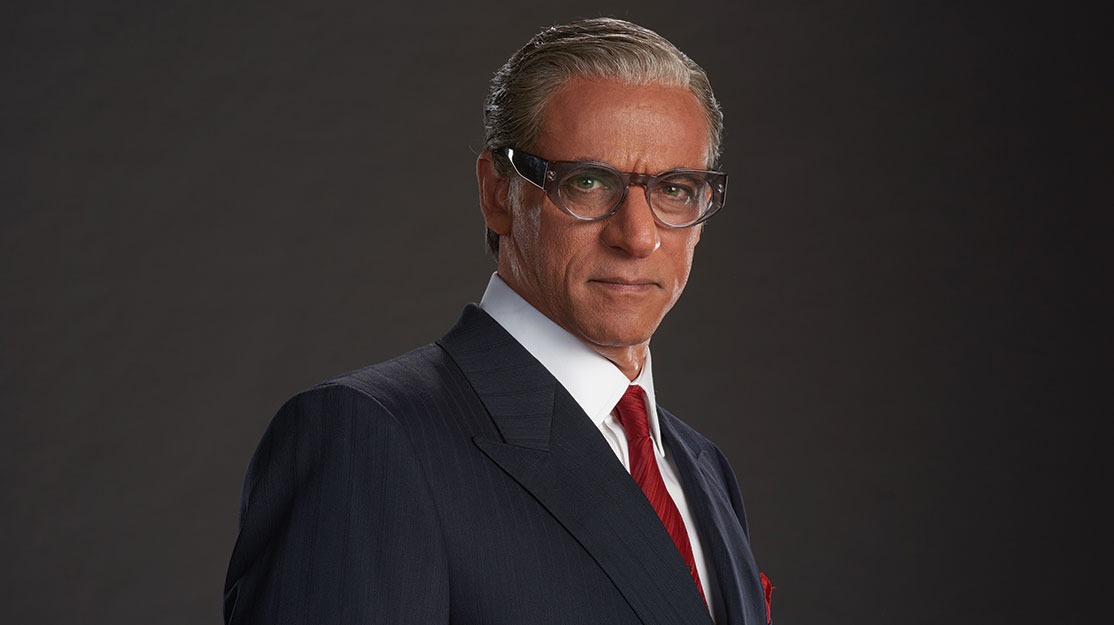 Alexander Siddig is used to playing characters with accents – but his next role, as Aristotle Onassis, presented a very different challenge, as he told DQ.

With major roles in such shows as Game of Thrones and Peaky Blinders, it’s hard to imagine Alexander Siddig enjoys much anonymity.

In his latest role, however, the actor is simply unrecognisable. Wearing a fat suit and sporting nose, chin and neck prosthetics, Siddig plays Aristotle Onassis (pictured above) in The Kennedys: After Camelot, the four-part follow-up to 2011 miniseries The Kennedys.

“It’s quite something,” he says of his new appearance, which required 90 minutes in make-up every day before filming. “Even my wife couldn’t recognise me – she had no idea! I sent her a photo and she asked, ‘Who’s this?’

“You don’t want to try to get it exact because it’s just stupid to attempt an exact replication of a human being. But as an actor, as well as for the make-up artists, you want to get an essence of the person and let the audience fill in the gaps. That’s exactly what they did and they’ve done a really wonderful job.”

Set following the murders of Jack and Bobby Kennedy, After Camelot depicts the complicated public and private life of Jacqueline Kennedy Onassis (Katie Holmes), her marriage to Greek billionaire Aristotle Onassis and her challenges with her son John F Kennedy Jr (Brett Donahue) as he struggles with school, work and his self-identity.

It also follows Senator Edward ‘Ted’ Kennedy (Matthew Perry) as he tries to pick up the mantle of his fallen brothers while dealing with alcoholism, infidelity and the shocking events at Chappaquiddick, which resulted in the death of a young woman.

Based on After Camelot: A Personal History of the Kennedy Family 1968 to the Present by J Randy Taraborrelli, the show is directed by Jon Cassar and Holmes and written by Stephen Kronish and Sandra Chwialkowska.

Due to premiere on April 2 on US cable channel Reelz, the producers are Muse Entertainment, Asylum Entertainment and Intuition Productions, with Muse Distribution International handling worldwide sales.

Despite the controversy surrounding The Kennedys – which Reelz picked up after it was dropped by History amid claims of historical inaccuracies – Siddig says it was an easy decision to join the sequel, having first been asked to play Onassis during filming for 2015 miniseries Tut, which was also produced by Muse.

“To be honest, it was not something I’d ever thought about and I told them to have a look at Javier Bardem,” he admits, before later deciding to take on the role of the Greek shipping magnate who was one of the world’s wealthiest men.

The costume and make-up he had to wear turned out to be key to getting into character, however, as there was little footage of Onassis available for Siddig to use as research.

“There’s almost nothing you can do, it’s really tricky,” he says. “There are a couple of good books I read and I watched 14 seconds of Aristotle talking on TV online. So I imagined he had to be larger-than-life, pretty bombastic and pretty damned charming for someone like [opera singer] Maria Callas or Jackie Kennedy to fall in love with him. And we just played around with that.”

It’s Jackie who takes centre stage in After Camelot, with Siddig describing Holmes’ performance as “astonishing.”

He continues: “She really brought an intimacy to that character that surpasses what she did in the first season. It felt uncomfortably close to Jackie at times – I thought I really shouldn’t be seeing some of the things I’m seeing, some of the emotions I’m experiencing. That ended up being one of the things people will enjoy about the show – you really get an uncomfortably voyeuristic view of someone everyone knows. We did a pretty intimate portrait and she was just marvellous. She was really wonderful.”

It was an equally simple decision for Siddig to join the cast of HBO’s epic drama Game of Thrones to play Doran Martell, the head of House Martell, in seasons five and six. His joy at landing the part was shortlived, however, with Martell meeting a grisly end after just five appearances.

“I was so excited,” Siddig exclaims, “and so gutted when I died. It was such a surprise to me. I had four more episodes, so I was expecting to go somewhere with this character. It was a real shame but it’s their business and their prerogative, and they bloody well made one of the best shows in the world so they’ve got a plan – I’m just going to be disappointed roadkill on the side of the road!

“But it was tremendous fun to get involved in the show. Even though I was only on for five seconds, people already recognise me for Game of Thrones and not something else, so that’s pretty great.”

Siddig is arguably best known for his role as Dr Julian Bashir in Star Trek: Deep Space Nine, in which he appeared in more than 170 episodes over six years to 1999. More recent TV credits include season six of thriller 24, Peaky Blinders, Strike Back, Primeval, Atlantis and Da Vinci’s Demons, while big-screen appearances have included starring in Syriana alongside George Clooney and Matt Damon and in Inescapable with Marisa Tomei.

He is also due to appear later this year in the third season of Fox drama Gotham, playing one of the Dark Knight’s deadliest enemies, Ra’s Al Ghul.

Yet for the Sudan-born actor, who grew up in England before moving to LA when he was 24, there’s one thing that usually links his screen roles. “I’m 51 and I seem to have done only accents all my career,” he says. “You name it, I’ve done it. Every part I do is, ‘I need a guy from Spain,’ ‘We need a guy from the Arab world.’ I just do accents and I’ve come to the conclusion there is no authentic accent for anything. Our accent changes depending on who we’re around. It’s the spirit that drives the accent that is much more important. As long as the audience buy it, it doesn’t matter and we shouldn’t obsess about it.

Siddig jokes that despite his agents’ hopes that he would become a leading man, he is happy taking the supporting roles that give his career variety and help him avoid being pigeon-holed into a particular role or genre.

“I’m enjoying being a character actor but I do get the odd leading man part if I need my vanity pumped up a bit,” he says. “But [that means] I have to go to the gym, and I can’t be bothered to do that! All through Star Trek I wore a padded shirt with muscles in – the whole nine yards. I had the perfect six pack until I took my shirt off. Patrick Stewart [who played Captain Picard in various Star Trek franchises] and I enjoyed the extra muscles they gave us!”

Back in the 1990s, fan culture was not what it is today and Siddig says there was no way to predict how appearing in Star Trek: Deep Space Nine would impact his life, both at the time and some 20 years later.

“Star Trek has become very cool but at the time it wasn’t,” he recalls. “Yet, of any one thing I’ve done, Star Trek has actually helped a lot of people. God knows how or why. Perhaps a lot of people were babysat by TV when they were kids, or felt excluded from society in some way or had a disability. Star Trek was really good for those people. I don’t know why, but they felt comfortable watching that show and got confidence from it. It gave them hope.

“I don’t know what alchemy or magic it is that show has – if people think it’s cheesy, I don’t care. It does really good work around the world. The amount of people who tell me Dr Bashir helped because he was like them – socially uncomfortable but passionate about what he did – there was something cool about that. It’s really gratifying, and if that doesn’t give you pride, I don’t know what will.”

As the quantity and quality of international television drama booms, Siddig believes a “creative El Niño” is behind shows such as The Man in the High Castle and True Detective – series he doesn’t think would have been made five years ago.

“When I started as an actor, TV was looked at with such scorn,” he notes. “Now the shoe’s on the other foot while movies work out how to monetise their business again without making Batman 57. TV’s figured out people are happy to watch a six-hour movie, just in little bits. Or they’ll watch a 13-hour movie in one go in one weekend. TV is having its day but it’s not going to be dislodged any minute soon.”

And while he might do a movie “every couple of years,” Siddig is now moving into production through his own label, This Red Rock, and is developing the company’s first project, a TV adaptation of Zoë Ferraris’ novel City of Veils.

The story follows a policeman and a female forensic scientist who team up to investigate the murder of a young woman found on a beach in Jeddah, Saudi Arabia.

“Having been in the business for so long, there’s part of you that says you seem to be wasting part of yourself by not doing more,” Siddig explains. “Don’t just sit around waiting for the phone to ring!”

He adds of his forthcoming production: “It’s crime and it’s super-high-concept TV set in the desert. But, most importantly, it’s talking about the struggle of women in Saudi Arabia. Someone’s got to make that. This time next year, there will be a poster for City of Veils. We don’t know who’s going to broadcast it but we’re up and running.”

tagged in: Alexander Siddig, Game of Thrones, Reelz, The Kennedys: After Camelot