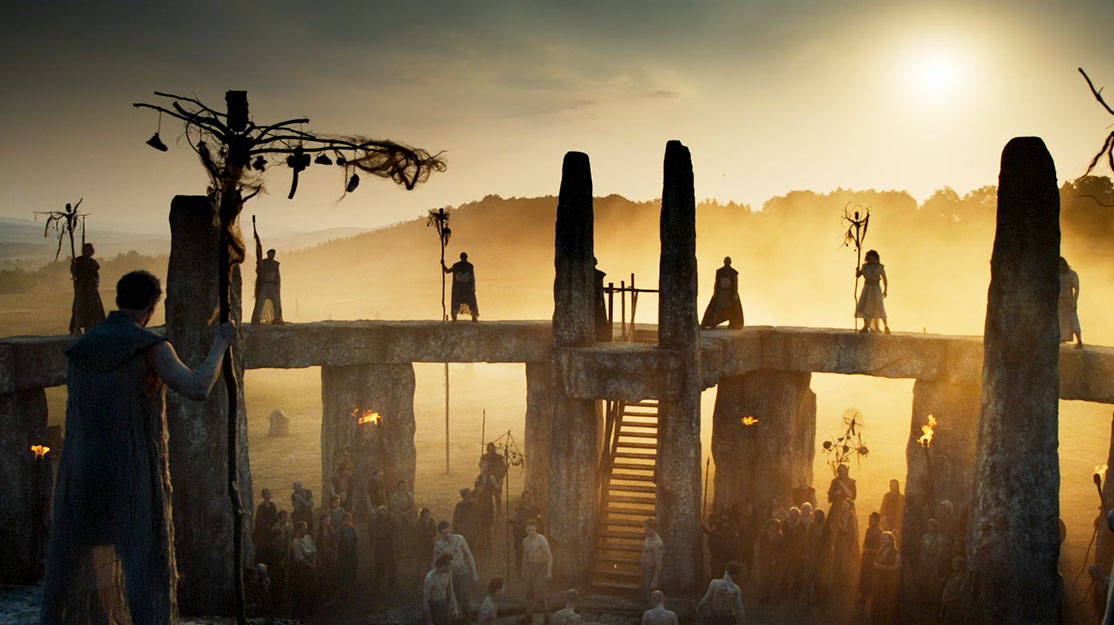 A walk in the desert marked a turning point for Vertigo Films as it turned its attention to television. DQ hears how the company plans to follow its initial success with historical drama Britannia and buddy cop thriller Bulletproof.

At first glance, there’s little to compare British dramas Britannia (pictured above) and Bulletproof. The first is an anarchic historical drama pitting a Roman army against unruly bands of warriors and druids, while the other is a high-octane, action-filled buddy cop thriller.

Yet both series share the same basic DNA, comprising a bold idea, passionate creators and, in Vertigo Films, a production company that wants to make series that challenge the status quo and break the mould of contemporary storytelling.

“What Bulletproof and Britannia share is a slightly rebellious quality. Bulletproof is a cop show with lots of humour and two black leads, which had never been done in Britain, bizarrely, while Britannia is a totally crazy, non-historical historical show, which again has a rebellious spirit built into it.”

Both have also been renewed for second seasons – and it’s easy to see why. Britannia debuted to 1.88 million viewers this January, making it the biggest Sky original production launch on Sky Atlantic since Fortitude in 2015, while Bulletproof became the biggest Sky1 series of the year when its first episode pulled in 1.59 million viewers in May. Both series are distributed by Sky Vision. 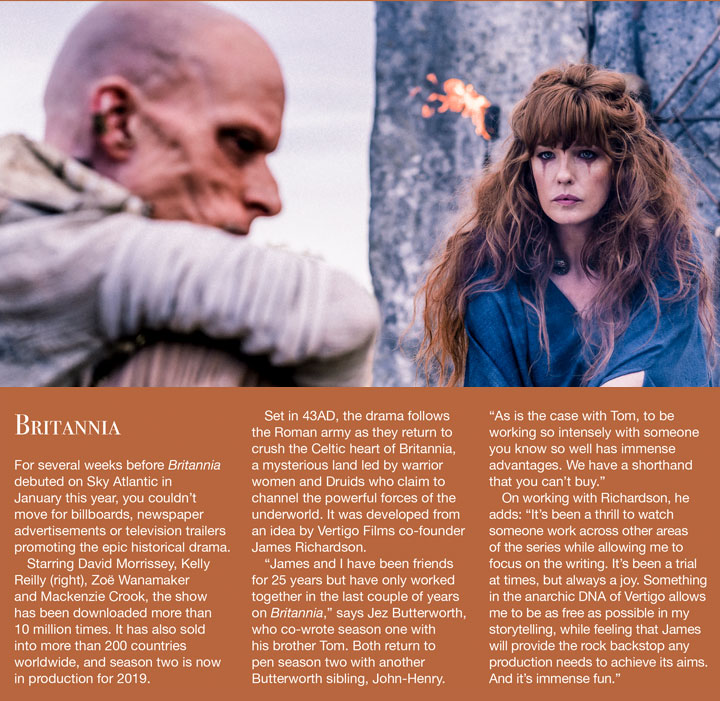 It’s been a long road to this point. Vertigo was established in 2002 and the film producer/distributor has backed more than 30 features, including The Football Factory, It’s All Gone Pete Tong and Streetdance 3D. But four years ago, Richardson and fellow co-founder Allan Niblo abruptly cancelled their meetings at an LA film market and drove into the Californian desert, where they picked over the bones of the declining movie business.

Having identified the value of DVD sales to the film business, they similarly recognised the evolution happening in the television industry through the emergence of platforms like Netflix and Amazon, and started discussing how to target the small screen.

“Because our success in the beginning was primarily in the DVD market, not the box office, we witnessed the snobbery of something that would have a seismic change years later,” Niblo says. “So when Netflix and Amazon came along and did pick up our films and paid a lot of money, every single filmmaker was snobby about them. But we saw that there was a massive audience there. If people are watching your material, it doesn’t matter if it’s in the cinema or on DVD. We predicted a few years ago this would all change and everybody would be clamouring to get on Netflix.”

Richardson compares the current television landscape to the Wild West. “Our greatest disadvantage is we have no idea how the TV world works, but that’s also our greatest advantage,” he says. “We’re not really interested. What we’re interested in is can we make some exciting, international, cinematic shows? We’re starting to work with some really exciting people, quality filmmakers and writers, and we don’t have any paymasters or anyone telling us what to do, which is an amazing luxury.”

Britannia came from an idea by Richardson, who then took the series to Jez Butterworth (Edge of Tomorrow) and Tom Butterworth, with the brothers writing it together. Bulletproof, meanwhile, came to Vertigo from co-stars Noel Clarke and Ashley Walters. They subsequently partnered with Vertigo’s Nick Love (The Football Factory) to develop the series. 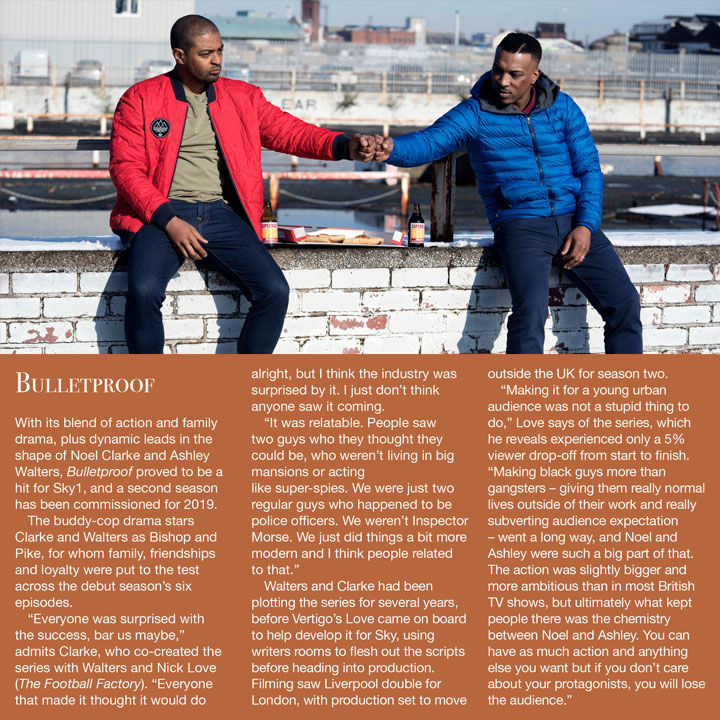 “When you’re working with someone like Jez Butterworth, you let them do what they want to do,” Richardson notes. “It’s the same with Noel and Ashley. What show do you want to make? We’ll back that and support it. I like to think we’re quite empowering. We might have ideas from the beginning but Jez, Noel and Ashley then made them their own, which we totally celebrate.”

Vertigo’s 2010 film Monsters is also getting the television treatment, with Ronan Bennett (Top Boy) leading the adaptation, which is in development at Channel 4.

“What’s crucial for us is to make it its own thing,” Richardson says, noting that the series will steer away from Gareth Edwards’ feature film about a photojournalist who must escort his employer’s daughter back to the US through an ‘infected zone’ full of creatures in Mexico. “Ronan wants to make something that’s unique in its own world, but we’re also being respectful of its origins and making sure the stuff we loved about it in terms of atmosphere and tone comes to the TV show. It’s an opportunity to explore a world we felt we only just touched on and to do something unique.”

The TV space allows Vertigo to experiment with more “tweener” ideas – their word to describe projects that sit in-between genres – which are always the most difficult to get away but often have the most interesting results. So for a show like Monsters, “we’re going to have some [monsters] and the fanboys and girls will see the show they’re excited to see,” Richardson explains. “In the same breath, we want to undercut it and do something a bit different. It’s the same with history like Britannia, and Bulletproof also played with genre. We get excited about that because it’s an area where perhaps some viewers feel they aren’t being catered to. There’s not enough things like that coming out of the UK.”

Vertigo will certainly be looking to scale further up the TV industry, with Richardson and Niblo admitting their focus going forward will remain firmly on the small screen. “Because we’ve done 35 movies, we feel we’ve done a lot of the 90-minute format, and this is a whole new world,” Richardson concludes. “None of us are feeling excited about doing a film, because we’ve got an opportunity to explore this brave new world.”