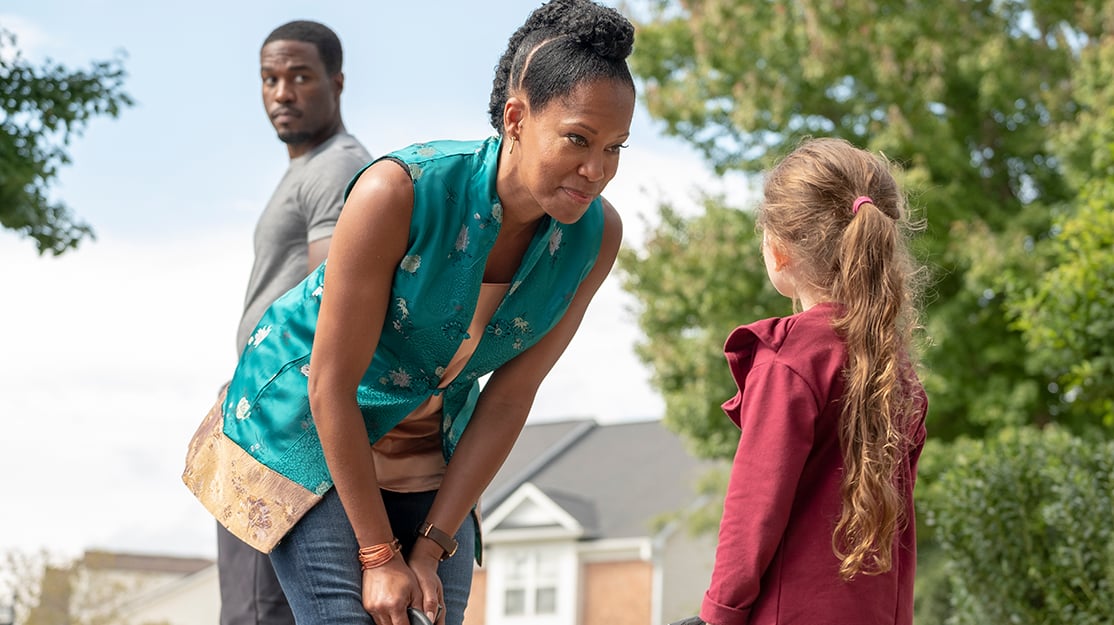 Oscar winner Regina King, fresh from directing her first feature film, shares some of the moments that have inspired her movie and television career, which includes The Leftovers, American Crime and Watchmen.

From starting out on 1980s television comedy 227, Regina King has built an award-laden career on both the big and small screens. While early film credits include Boyz n the Hood, Friday, Jerry Maguire and Enemy of the State, in 2019 she won the best supporting actress Oscar for her role in Barry Jenkins’ acclaimed If Beale Street Could Talk.

More recently, however, she has mostly been seen on television, taking roles in shows ranging from Leap of Faith, 24, Southland and The Boondocks to The Leftovers, American Crime, Seven Seconds and The Big Bang Theory. Last year she collected the Emmy for best lead actress in a limited series or TV movie after reteaming with The Leftovers’ creator Damon Lindelof to head the cast of HBO’s adaptation of graphic novel Watchmen.

Off-screen, King has also been building her reputation as a director, helming episodes of Southland, Being Mary Jane, Scandal, Shameless, This is Us and Insecure, before last year competing her first feature film, One Night in Miami, which imagines what happened when Muhammad Ali, Malcolm X, Sam Cooke and Jim Brown met in a hotel room in 1964.

This week, DQ heard from King as she discussed her acting career and journey to becoming a director as part of a Bafta Masterclass.

Having worked with writer/director John Singleton on 1991’s Boyz n the Hood, she saw his creative process up-close on 1993’s Poetic Justice, in which she starred with Janet Jackson and Tupac Shakur.
I just had so many questions. My excitement and the depth of my questions inspired him to open up his entire preparation process for me and up until that time, I did not realise all that entails when you’re a director to get to the moment where I’m actually spending time with directors as the actor.

I was able to see his storyboards, and him putting the storyboards together, and watching some films with him that inspired him or that were inspiration for Poetic Justice. I was able to hear him having conversations and deciding what department heads would be coming on board for a couple of positions he hadn’t yet hired. I was just fascinated and blown away, but I can’t say in that moment I was feeling like, ‘I’m going to do this.’ My respect levels for the director definitely moved up a notch or two.

Becoming a director isn’t about “vanity” but comes from King’s ambition to be more deeply involved in the storytelling process.
You want to have more control of the aesthetic, the tone and the story you’re telling and you’re able to do that as a director. As actors, once we make that discovery on a conscious level, we are ready to actively pursue it. One of the things I’ve learned along the way speaking to directors who are veterans is that nervous energy we feel [when a film is being released], they still feel that to this day, even after having done several films. I still get nervous that first day of work. You’ve got to get all that nervous energy out and I feel like if I didn’t feel nervous on my first day or on a particularly big scene, I should probably be even more nervous because that means it doesn’t mean that much to me.

King’s directing education came not just from directors she has worked with, but other crew members as well.
Once I really understood the process that doesn’t involve me as an actor, I was spending more time with the production designer and in the art department during times I wasn’t shooting. I would have in depth conversations with the prop master. All of those things were part of my education along the way. The conversations I’ve had with other crew members outside of the director that were as impactful as the directors were with the camera operators.

King has identified a time around 2010 where the projects she was acting in began to speak to social issues facing the US.
I don’t think I was aware that was happening until Watchmen. I looked back at everything – from Southland to American Crime to If Beale Street Could Talk and Seven Seconds – and all these stories I was a part of, these storytellers I was collaborating with, our values and our feeling it was necessary to tell these types of stories were aligning. This space I’ve been in and the circumstances that have taken place in my life have led me to these choices. I feel like this film, One Night in Miami, also speaks to that: what does social responsibility look like for you as an artist? Maybe 10 years ago it started becoming more clear to me about my personal journey and using my voice when it comes to social responsibility.

The actor also seeks true collaborators to work with in film and television.
When I think about projects I’ve done early in my career that did not feel as much like a collaborative process as the projects I’ve done in the past 10-plus years, I realise the first time I had that experience on a conscious level was Southland. Within that experience, I remember saying I really don’t want to be a part of a project if it doesn’t feel collaborative or if it doesn’t feel like a space where everyone involved feels like they can take ownership in it in some way. At the beginning of the journey with One Night in Miami, I had to audition for the role of director, and as they’re auditioning me, I’m auditioning them – do they feel like a collaborative team? Within that hour of us meeting, I immediately felt like I can work with these people every day and I know they will be great support system as we move forward.

Working with Barry Jenkins on If Beale Street Could Talk, King was struck by his attention to detail and the importance of creating moments not written down in the script.
One of the big things I was able to take away from Beale Street is Barry’s attention to detail in the nuanced, subtle moments. Seeing the final product, it really helped me to understand how much those moments make the entire project sing and while those moments are not the moments on paper, those are the moments Barry created that are the difference between loving [King’s character] Sharon and Joe [Colman Domingo] a little bit more than if you were just doing what was on the page. Taking that away from that experience, I was able to infuse moments like that in One Night in Miami, and without a doubt, if I had not had that experience with Barry, I know I would not have been sensitive to the idea that moments like this are absolutely necessary to the story.

With British actor Kingsley Ben-Adir playing Malcolm X in One Night in Miami, King is an advocate for choosing the best actor for the part, no matter where they come from.
I feel like the best actor for the role should play the part, the actor who truly understands the role they’re playing. Kingsley and I, when I first saw his audition, I was like, ‘Oh, OK.’ Of course, I have my own moments of thinking, ‘How are people going to [react],’ because this conversation [about British actors playing iconic US figures] is going on and it’s been going on. But up until that moment, if I was moved by a performance, I really don’t care where a person’s from. As an audience member, to me they truly understood what they were doing, what they were embodying. After Kingsley’s first audition, I wanted to give him some notes, talk to him and get to know him and his relationship to Malcolm. He said all the things I needed to hear him say. It’s unfortunate this is where we are.

One of the things I discovered throughout this process of One Night in Miami is upon first receiving and reading this, I thought this is a love letter to the black man’s experience in America. But taking a step back and taking in marginalised people across the world, there are feelings and experiences that black people in the UK and Brazil feel are the same as in America. While the history of how a country came to be may be different, the marginalisation of a black man is the same. Colourism is the same in all of those places. Kingsley was the best actor for the role – I wouldn’t change my choices for anyone.

When casting, King feels a role chooses an actor.
When that person comes in, it’s just clear they have a connection to the character in a way that they’ve been able to find a bit of themselves within that role so that the performance feels like it’s coming from a real place. That’s what we do as actors, we find a bit of ourselves in there so we can truly keep a performance grounded and rooted in truth.

Her advice to anybody would be to avoid falling into the trap of comparison.
We so often get caught up in thinking ‘I didn’t do this,’ ‘I didn’t go to this school’ or ‘I never saw that film,’ ‘That piece of work is not my favourite but it seems every director who has an interview talks about that one piece of work.’ It doesn’t mean you’re not going to be successful or great at your craft just because you don’t respond to it the same way. That’s kind of the point, that’s why you are you, because you’re not someone else. Some of those attributes are God-given, some of them are picked up along the way because of your circumstances but those are the things that make you, you, and you have a signature to your storytelling. I would just say don’t fall into that trap of comparison.