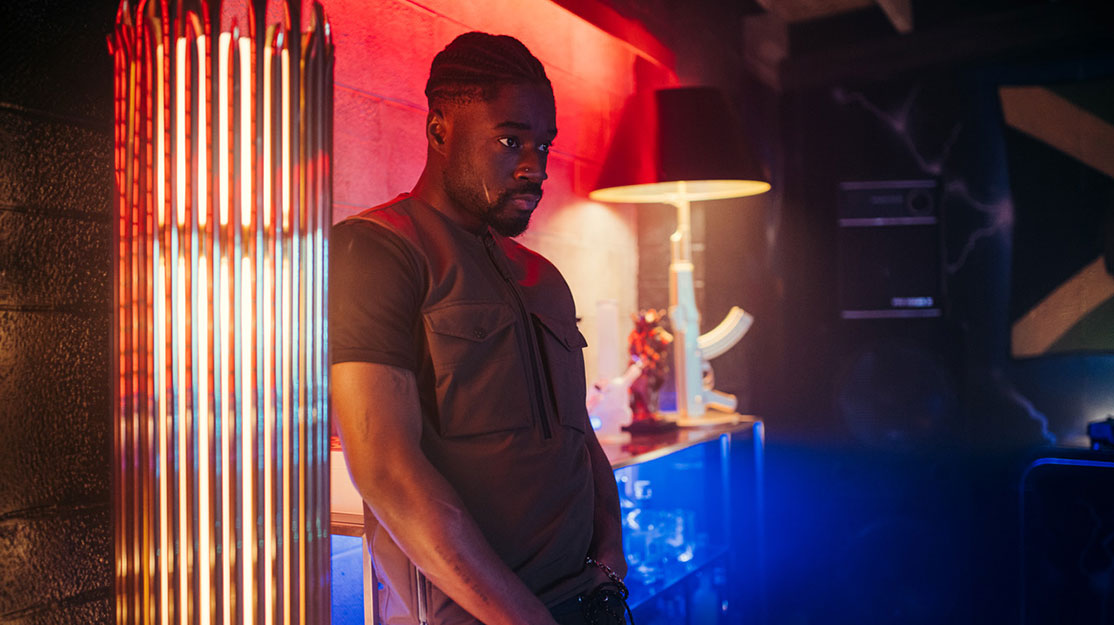 Charles Babalola speaks to DQ about his role in Stephen Merchant’s BBC and Amazon comedy crime thriller The Outlaws, which introduces seven strangers forced to complete community service together.

While it’s not unknown for series to receive early second-season orders, perhaps coming after just a couple of episodes have aired, broadcasters usually like to wait until they have a chance to crunch the viewing figures before confirming a show’s return. But like US drama Snowpiercer and just a few others before it, BBC and Amazon Prime Video’s comedy crime thriller The Outlaws can boast the rare achievement of being renewed for season two before season one has aired at all.

As filming took place on season one’s six episodes last year, either side of a Covid-enforced hiatus, the commissioners clearly liked what they saw and greenlit an additional run, allowing both seasons to be filmed back-to-back.

When DQ speaks to cast member Charles Babalola, who plays Malaki, he has just finished filming his scenes for season two little more than a week before The Outlaws, which was previously known as The Offenders, makes its debut on BBC One tonight.

“Only someone like Stephen Merchant can get that luxury,” he says of the early renewal decision and the show’s creator, writer and director. “We shot part of season one in February and March 2020, and then the lockdown came in and we didn’t go back until December. In that time, he put together some footage and they were chuffed by what they saw and commissioned a second season.

“That was great. I’ve never done it before where you shoot season one and season two at the same time. We needed to shoot out some of the locations so, at times, we were dipping in and out of both seasons. It’s a lot for your mind to juggle.”

Set and filmed in Merchant’s home city of Bristol, the fast-paced, contemporary series introduces a disparate group of criminals who are sentenced to complete community service together as payback for their misdemeanours. Charged with renovating a derelict community centre, they initially clash and resent the menial labour, but when one of them becomes involved in the world of organised crime, they unite in unexpected ways.

Central to the story is academic high-flyer and serial shoplifter Rani (Rhianne Barreto), who is forced to work alongside characters including inept lawyer Greg (Merchant) and socialite Gabby (Eleanor Tomlinson). Meanwhile, Christian (Gamba Cole)’s attempts to keep his sister Esme away from a local gang see him doing the bidding of charismatic leader Malaki. When some of the outlaws – right-wing businessman John (Darren Boyd), radical activist Mryna (Clare Perkins) and con-artist Frank (Christopher Walken) – discover a huge amount of cash stolen by Christian, they unwittingly put themselves at the centre of a criminal turf war.

Babalola says getting a second season is a “blessing” for any actor because it means working for the rest of the year in an industry where cast and crew often live from job to job. But on a creative level, it meant he also knew where his character would be heading across both seasons of the show, which is produced by Big Talk Productions and distributed by BBC Studios.

“You could really build this character because there was more information and more story we knew from the second season,” he says. “Of course, you try to live it from scene to scene and be present in what you’re doing in the first season but, for me, it was great knowing more of the story for the character.

“As the episodes go on, Malaki’s story starts to unravel and his relationship with the offenders really starts to come to the forefront of the story. The main point of cohesiveness between them has a big part to play in Malaki’s story and, as the first season goes on, he definitely becomes more prominent in the story. I would say you really get to psychologically get inside the character by the end of the first season, and in the second season we really delve deeper.”

The actor describes working on The Outlaws as an extremely collaborative experience, with Merchant and co-director John Butler always on hand to discuss character and story ideas.

“It was at the readthrough when Stephen told me he was hoping to do a second season and told me what would happen to my character at the end of the first season, so it was interesting to know there was potential for fun stuff to happen to the character,” Babalola adds. “Because I grew up around the world of the character, I had my input and my thoughts about certain things and how we could play certain things. It just became super collaborative, and I can only thank Stephen and John for that.”

Featuring flashbacks that reveal how each of the offenders came into conflict with the law, the opening episodes see Malaki order Christian to carry out a robbery in return for keeping Esme away from his gang, which rules the local estate. But when Malaki comes under pressure to return some missing cash, he realises Christian has double-crossed him, and sets out to retrieve the money.

“My first thoughts were I know this kind of guy, I’ve grown up with people like him, in this world,” Babalola says of his character. “But there needed to be layers to this character. It’s very easy to play a character like this and it be super one-dimensional – you don’t see what’s going on underneath. A lot of these guys, there’s a lot of stuff going on in their lives that you don’t see because there’s such bravado, even a bit of insecurity.

“My approach to him was we’re going to show the ‘hood’ guy but what’s going on in his home life? How does he earn money? Why does he need to earn money? Who are his influences? What is his relationship with his parents? These are things that were super important to me and even if you don’t see it in some scenes, I wanted it to be going on behind his eyes.”

One example of Malaki’s character beyond his gang leader image comes when he refers to being responsible for feeding his family. “There are plenty of ways you could have gone with it, but I thought this was an interesting route to go down because, for everyone, family is everything, or at least it should be everything,” the actor notes. “A lot of these guys fall down that route because of easy money. But when you pair easy money with a family who can’t put food on the table, it becomes a serious issue. It doesn’t become a want, it becomes a need.”

Working with Merchant, who famously wrote and directed The Office with Ricky Gervais, was “a pleasure,” says Babalola, adding: “I really respect and admire what he’s done in the business, what he’s done in the comedy scene, how instrumental he was in making The Office and how much of an integral part he was in a cult classic British TV show that then went to America and had its own success.”

The actor was particularly interested in working on the comedic side of The Outlaws: “I learned a lot from him. He’d do things or say things to me and all I needed to do was listen to a few words and soak it in. He was super collaborative with me. I shared my thoughts with him on things I thought did and didn’t work. He was super open.”

There were also times they would improvise together when the camera was left rolling at the end of takes. “I did a scene with Stephen and, once it finished, the camera kept on rolling and he was just riffing along. He was really in the zone and it was super hilarious. That was fun.”

In his fledgling screen career, Babalola has built up a strong list of credits, most notably including Thirteen, Broadchurch, Black Mirror and Bancroft. On the West End stage, he also starred alongside Breaking Bad’s Bryan Cranston in the 2017 theatre adaptation of 1976 feature film Network.

Watching Cranston every night for five months was “a lesson” in acting, which Babalola says was one of the best experiences of his career so far. “I’m just an actor who wants to do good work. I want to tell good stories and important stories. I also want to work on great scripts and work with great actors. Those are the most important things,” he says.

Experimenting in comedy was one of the drawing factors that led him to The Outlaws, which is a side of acting he hadn’t explored much until now. There was also the not-insignificant matter of it being Stephen Merchant project for the BBC and Amazon.

Now that the series is set to hit screens, Babalola believes viewers will warm to its blend of drama and Merchant’s distinctive style of humour as the initially disparate band of offenders are soon pulled together.

“It touches on real-life situations and people,” he says. “On top of that, it’s fast-paced and fun. Every single episode gets better and better, even when you get into the next season. You definitely see a lot of Malaki’s serious side in the first season, but every now and again there’s a little bit of comedy I tap into. It was fun to play around with that.”