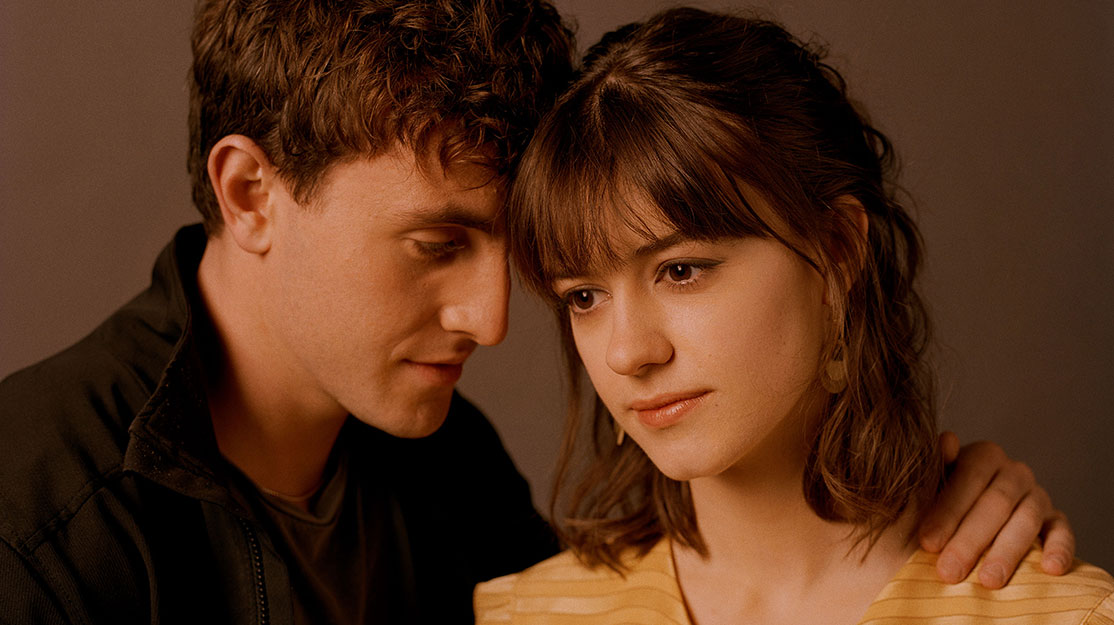 Normal People stars Paul Mescal and Daisy Edgar-Jones look back on the success of the BBC and Hulu drama, based on Sally Rooney’s bestselling novel, and recall their time on set together.

As Covid-19 spread around the world last year and countries went into lockdown, viewers were presented with a variety of binge-worthy shows, from Netflix’s reality doc Tiger King to Disney+’s Star Wars series The Mandalorian. But among the most watched dramas in the UK was the BBC and Hulu’s adaptation of Sally Rooney’s bestselling novel Normal People.

Directed by Lenny Abrahamson and Hettie Macdonald, Normal People drew more than 16 million views in its first week on the BBC iPlayer and later became the most viewed BBC show in 2020, as viewers followed the intense relationship between Marianne and Connell while they navigate their final school days and head to university. In total, it racked up 62.7 million views from its launch in late April to early December.

But what made the show such a massive success? The excruciatingly painful yet enticing relationship between Connell and Marianne? The intense and expertly orchestrated sex scenes? The beautiful Irish backdrop? Or was it desperation for a distraction during lockdown, for something, well, normal?

Paul Mescal, who played Connell alongside Daisy Edgar-Jones as Marianne, wasn’t surprised by how well the drama was received but by the sheer volume of people watching it in its entirety so soon after its box-set release.

“I remember the first weekend just seeing Twitter go a little bit wild and being like, ‘Oh, it’s working,’” he told a Royal Television Society event. “I mean, we were in our houses; everything was just digital and intangible,” said Edgar-Jones.

Irish actor Mescal found an instant attachment to Connell. When he first read the book, he recognised who the character was and what his motivations were, which meant he could see himself in the scenes, which he admitted probably isn’t “a particularly healthy way to go about it” but does tend to happen to actors who fall in love with a character.

In the series, which is produced by Element Pictures, Connell is unable to embrace the role of popular schoolboy in the small town of Carricklea, but his introverted nature means he feels comforted by the area he lives in and is “really quite terrified of stepping away from that,” said Mescal. When the characters move to Dublin for university, Connell has to rediscover himself as well as his relationship with Marianne – something that is very difficult for him.

Of his character’s development across the series, he said: “I feel like he ranges between intense joy and intense suffering over that period. It’s a series about growth and mistakes, all whilst being in company with another person who you love.”

Edgar-Jones, who was working on Fox’s War of the Worlds at the time she auditioned for Normal People, was initially drawn to the show because of her own Irish heritage. Despite not having read the book yet, she reflected on how beautiful she felt the characters were in the script and the striking contrast to the acting she was doing at the time. “It was very internal and not much was said [out loud],” she recalled. Then, after reading the book, she was relieved she hadn’t done so prior to sending off her self-taped audition, believing she would have overthought the audition had she known how “special” the project was.

“I very vividly remember when I read the book loving the way Sally wrote Marianne’s inner life and her thoughts,” Edgar-Jones said of the character’s inner musings about the social hierarchy of her school and the dynamics of her classmates’ relationships.

Described as intelligent, with the ability to be feisty and curt but also kind and empathetic, Marianne has a very troubled relationship with her own sense of self throughout the story, leading her to believe she isn’t worthy of love – something that her complex relationship with Connell seems to alleviate. “It’s a real coming-of-age story and by the end she’s at a place where she’s sort of okay and I think she’s not ecstatically happy, she’s just okay with her life,” Edgar-Jones said.

The intricate, compelling and sometimes heartbreaking relationship between the two characters is captivating across the 12 half-hour episodes, which begs the question, would their on-screen relationship have been so profound had it been two completely different actors?

“When I first saw him, I felt, ‘Oh, I’ve known this person a very long time,’” Edgar-Jones said of her first chemistry read with Mescal. “It’s very strange, even though they’re two different people, I was like, ‘Oh that’s Connell.’”

She said Abrahamson, the show’s lead director and an executive producer, created a collaborative workshop audition scenario that made the actors feel “very safe.” Mescal remembered “feeling incredibly calm with Daisy and in those characters.” He found Connell came to the surface more in Edgar-Jones’ company than in his solo auditions, which is probably the outcome a director would hope for from a chemistry read.

Of the characters’ romance, Mescal doesn’t think Connell realises that at the time of meeting Marianne, their relationship is going to be the most formative he’s ever going to have in his life. In the first part of the series, when the two first come together, Connell holds much of the power within the relationship, being in the popular group at school yet sleeping with an anti-social and uncool Marianne in secret.

The power dynamic then shifts through the series, with Marianne coming out on top socially when the two attend Trinity College Dublin, but who holds the most power overall?

“To me, those characters’ lives don’t end at the end of the series. I feel like they’ll constantly be dancing between being in a position of power,” said Mescal, noting Connell’s need for Marianne to decide for him whether he should move to New York at the show’s end. “There’s a power in that that I think Marianne wields and Daisy performs with such grace and subtlety, which is quite thrilling.”

Power is a recurring theme through the series, and Normal People features displays of both emotional power and independent power dynamics within their intimate relationship, which Edgar-Jones believes is what makes the story so truthful and why it’s so frustrating to the viewer. “At the time they kind of miss each other or combat each other because they don’t know where the power is or who has it. It’s kind of ever-changing,” she continued. “Both those characters have a very difficult relationship with who they are. I think by the end we see that they’re content with who they are and so can be happy together and apart.”

Many of the scenes shared between Connell and Marianne were visibly intense, not least those final moments in which the characters are not only saying goodbye to each other but the actors were bidding farewell to them as well. A scene in episode 10 packs an equally emotional punch, as Connell is in a session with a guidance counsellor and the scene sees him attempting to explain his innermost thoughts following the suicide of a close friend. “I knew it was important that I gave [the audience] the opportunity to see into what motivated him to make some of those mistakes. That was kind of our one opportunity to see the way the cogs of his brain actually work,” said the actor.

In preparation for his complex role, Mescal said it was important to understand the motivations behind his character’s actions. He spent much of his time transcribing Connell’s internal monologues from the book – inner thoughts he knew wouldn’t be communicated out loud in the script and “you hope to God that something is readable to an audience.”

He also attempted to find “non-vocal releases” that would help reflect what was going on inside his head, such as with grunts. He joked that even Sally Rooney had said to him that she found Connell difficult to write at times because he doesn’t say anything.

Edgar-Jones was saddled with the even greater pressure of acting with an Irish accent, a skill she obviously mastered as few of those watching knew she is English. She puts that down to growing up with her Irish mother and grandfather. She enjoyed being able to personalise her tone to be soft, which allowed her to have a clear differentiation between Marianne and herself.

One of the many positive aspects of having the writer of the book also write the screenplay was the even greater understanding of characters that could be gained from the book. Being able to ascertain what Marianne was thinking by using Rooney’s original writing as a reference was extremely useful to Edgar-Jones, who would get the scripts and paste in lines from chapters, in a bid to really read between the lines.

The success of Normal People has put both Edgar-Jones and Mescal on the map as actors to watch, something they feel extremely grateful for. Mescal admitted he was actually close to giving up on acting all together before he secured the role. Edgar-Jones noted the difference the show has made to their careers, from being grateful for any opportunity that came her way to now feeling she has more of a choice in the projects she chooses to embark on.

“I’m looking to make choices that hopefully will surprise people in a good way. I don’t want to go and play Connell 10 times again,” Mescal said. “I love him deeply but I want to play characters that scare me a little bit.”

Despite that, both actors would “happily” agree to play Marianne and Connell again should Rooney decide to write a sequel to Normal People. For now, the big screen awaits them both, with Mescal starring in the Maggie Gyllenhaal-directed The Lost Daughter and a modern-day adaptation of classical opera Carmen, while Edgar-Jones will take the lead in the adaptation of Delia Owens’ bestselling novel Where the Crawdads Sing.