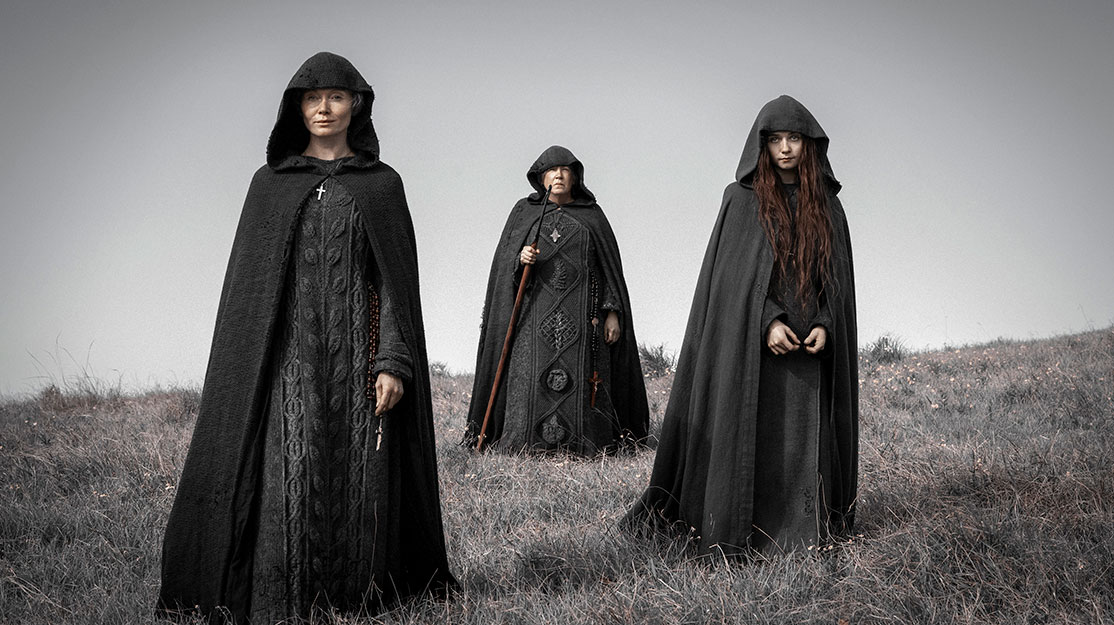 An Emmy winner for her performance as the ferocious Aunt Lydia in The Handmaid’s Tale, Ann Dowd’s latest role takes her to the edge of the world for Australian miniseries Lambs of God.

Ann Dowd admits she is drawn to certain types of characters – solitary figures who live on the outskirts, loners, people who are a little off. She won widespread acclaim for playing cult leader Patti in HBO’s The Leftovers for three seasons from 2014, before scoring a Primetime Emmy in 2017 for her portrayal of brutal enforcer Aunt Lydia in Hulu original series The Handmaid’s Tale.

“I feel extremely fortunate to be working at a time when there are more roles for women and they’re not the mother, the mistress or the grandmother,” says Dowd, speaking on the phone from Toronto where she is filming the third season of the Hulu hit. “It’s been wonderful. I love Patti, and trying to figure out what’s happening with Aunt Lydia – or what happened. Right now we’re actually filming her backstory, which has been fantastic and is written very well, realising why she is the woman she is. I couldn’t be more grateful for them.”

In her next series, Lambs of God, Dowd’s character is similarly reclusive. Forgotten by the Catholic Church, the Sisters of St Agnes – Margarita (Dowd), Iphigenia (Essie Davis) and Carla (Jessica Barden) – live in a self-imposed exile on a remote and rugged island until an ambitious young priest, Father Ignatius (Sam Reid), accidentally stumbles across them as he arrives on a mission from the church to sell their crumbling monastery, forcing them to defend their lives and their beliefs.

Produced by Lingo Pictures for Foxtel’s Showcase and distributed by Sky Vision, the Australian series is based on the novel by Marele Day. It has been written by Sarah Lambert (Love Child), with Jeffrey Walker (Jack Irish) directing.

“I’ll never forget it for as long as I live. It was quite an extraordinary experience,” Dowd says of filming the four-parter. “It’s such an unusual story. Sarah Lambert did a beautiful job adapting it. I was hesitant – it’s so far away [filming in Australia] – but the whole experience was unlike anything I’ve ever done.”

Offering extensive background on their characters, Lambert told the main actors the nuns were part of an order driven from the male-led church that wanted to wipe out women’s voices. “It’s a story as old as time, the silencing of women’s voices,” says Dowd, who was educated by nuns, raised within the church and has two aunts who were Catholic sisters.

“These sisters are very aware of the male hierarchy and what that all means. They choose to live apart from it. In times of prayer and service to God, that is the way they express their devotion. The beauty of this story is they are able to confront what has held them captive emotionally for so many years.”

What unfolds, the actor says, is how each of the sisters face barriers being broken down and find the strength to face their fears. “The story has so many layers and I loved it,” she adds.

Dowd was taken aback by the extent to which she was transformed by the role, for which she had to learn to knit and use a spinning wheel. “Lydia is a costume but I look in the mirror and I recognise myself. With this nun, there’s mud on her face, she’s kind of sunburned, we had long, grey wigs. I would look in the mirror and have no idea who I was looking at. This was such a departure.”

Although set off the English coast, filming for the monastery took place on a remote Tasman island. The shoot also visited Fox Studios Australia, the Blue Mountains and across New South Wales.

Dowd also confronted her own fears during production, when the cast were shooting on a clifftop in Kiama, near Sydney. They were on their way back down when, suddenly, “I’m completely gripped by panic,” she recalls. “At the same time, I realise this is the landscape of my nightmares – trying to get down from a mountain and not being able to do so, being rooted in panic, and that’s what happened.

“It brought up something I didn’t even realise I was afraid of. Once you do that, you realise you’re in the right place. I’m going to trust this entire experience and to come to get to know a character who is not easy to know because she’s shut down in so many ways.”

“She’s like this gorgeous Earth Mother to have around and she’s very interested in other people lives and stories, which I suspect has a lot to do with why she excels at her craft,” he says. “We were blessed to have her spend an extended time in Australia, which is testament to the strength of the script that attracted her down here. Ann, Essie, Jess and Sam gelled brilliantly from the day they met, and the results of that collaboration delivers an ensemble performance that is very exciting.”

With the series in competition at Series Mania in Lille, Stephens adds: “We can’t wait to show it to the rest of the world.”