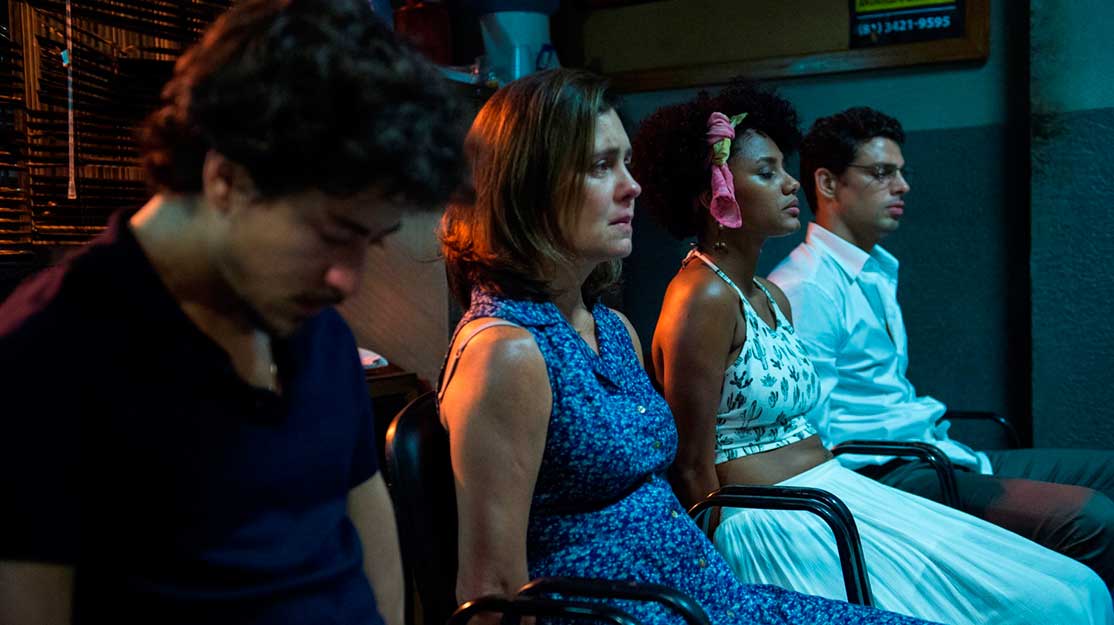 Writer Manuela Dias tells DQ about Justiça (Above Justice), a Brazilian drama that follows the fate of four people arrested on a single night.

Brazilian miniseries Justiça (Above Justice) follows the interconnected stories of four people who are arrested on the same night.

Vincent (Jesuíta Barbosa) murders his fiancée Isabela (Marina Ruy Barbosa) after walking in on her with a former boyfriend; housewife Fátima (Adriana Esteves) is set up for drug trafficking after killing policeman Douglas (Enrique Díaz)’s dog; Rose (Jéssica Ellen) is arrested for possessing drugs at a party; and Mauricio (Cauã Reymond) is held on suspicion of murder after assisting in the suicide of his dancer fiancée Beatriz (Marjorie Estiano).

In each strand of the story, the central characters either face or fight for justice after the as the drama unfolds over several time periods.

Creator and writer Manuela Dias tells DQ more about the 20-part series, which was produced for TV Globo and is distributed by Globo.

Where did the idea for the show come from?
Manuela Dias: Above Justice was inspired by a real story. My house cleaner asked for my help because her husband was arrested for killing their neighbour’s dog. The neighbour was a police officer and her husband subsequently spent more than two months in jail. I thought of her sleeping alone in an empty bed, and the series was born from that emptiness. There is an intimate side of our lives governed by law. It’s not a story about courts; it’s a story about people affected by the law. They commit acts that are considered crimes and go to jail; they serve their time in prison and then return to their lives. But their lives are completely torn apart. Above Justice is a series about what happens after you pay your dues to the justice system. On the one hand, we have forgiveness; on the other, there is revenge.

How was the story developed for Globo?
After the idea came to me, I wrote a project and showed it to Globo. Zé [José Luiz Villamarim, director] read the project because he was on another show with our art director Moa Batsow, and he fell in love with it. We didn’t even know each other at the time. Globo approved its development and I started working on it.

How would you describe the writing process?
It took me one year to write the 20 episodes, with the help of two collaborators. They helped me create the tone and structure the story – in this case, four stories. But I always write all the dialogue by myself. My partnership with Zé is also key to the creative process. We read everything together, build the atmosphere and we talk about everything from characters to plots, locations and actors.

How did you work with the director to develop the show’s look?
Just like Zé has his share in my work, I also give some input to his work. I imagine the scene while I’m writing it and we discuss every element. Moa also collaborated with us in several areas.

Who are the lead cast members and what do they bring to the series?
The cast was selected through an intense brainstorming process between the authors, the artistic directors and the casting directors. But the main characters are then developed based on each actor. I think about the actors a lot when I’m writing – how to use their strengths in a subversive and challenging way. The performances of Enrique Diaz [Happily Ever After?/Felizes Para Sempre?] and Leandra Leal [Império/Empire], playing Douglas and Kellen respectively, are perfect examples of two actors who were taken outside their comfort zone. Zé is very good at subverting the actors.

Where was the series filmed and how were locations used in the script?
Years ago, I wrote a movie called Deserto Feliz, directed by Paulo Caldas, which took place in Recife and in the backlands of the state of Pernambuco. This made me go on some research trips, and a lot of things caught my attention there. Recife was already on my mind when I had the idea for Above Justice. The storyline called for that urgent atmosphere of Pernambuco. Zé also liked the idea, and so we went for it. I usually travel to check the locations because it is an inspiring experience, but I couldn’t join the team for the Above Justice process because I was in the late months of my pregnancy. But they sent me photos and we discussed our opinions. After choosing the locations, I rewrote some things, allowing the scenery to merge into the drama.

What were the biggest challenges during production?
Above Justice tells four stories that divide a city. The narratives are connected in space, but they don’t necessarily share the same drama. In fact, it is quite the contrary: the same event triggers independent dramas. We also have what we  call ‘joint scenes’ – sequences that appear in all four stories. They serve as basis for the series’ format. Accomplishing this was a great challenge in terms of concept and execution – not to mention having to deal with fires, a storm, and boat and helicopter scenes. It almost sounds like an action story!

What do you hope viewers take away from the series?
I hope people will open up to the great dramas that hide behind the unknown faces we come across every day. Empathy is a fascinating social tool. Being able to put ourselves in someone else’s shoes is a complex and necessary part of civilisation. And I believe emotion allows us to relate to others. The transforming power of emotion trumps reason in all aspects. For example, we’re able to coexist with poverty in our day-to-day lives because we develop tools to dehumanise beggars and devoid ourselves of any emotion in that sense. Experiencing any kind of resentment towards injustice is not just a mental process; it’s more than that. Love can accomplish things that are so unlikely, they can even sound miraculous. While we can’t change the world, perhaps we can influence people through drama.

How would you describe the state of Brazilian TV drama and how is the industry evolving in 2017?
Brazilian TV production is huge and diverse. I see a melting pot of screenwriters and directors – on both broadcast and cable TV. We have a strong tradition in television drama, with work from the likes of Gilberto Braga, Silvio de Abreu, Aguinaldo Silva, Walcyr Carrasco and João Emmanuel Carneiro reaching millions of viewers in Brazil. The industry has lots to offer to people who, like me, are just starting. Globo, in particular, has been investing a lot. There are writers with 10 or 20 years’ of experience in the market who have built their brands. It’s a very consistent process that I believe will bring something new.

What are you working on next?
I’m developing a telenovela. As someone who works with television drama in Brazil – cinema and theatre as well, but mostly television drama – writing a novela with 170 episodes has long been a dream for me. It will be a great challenge.