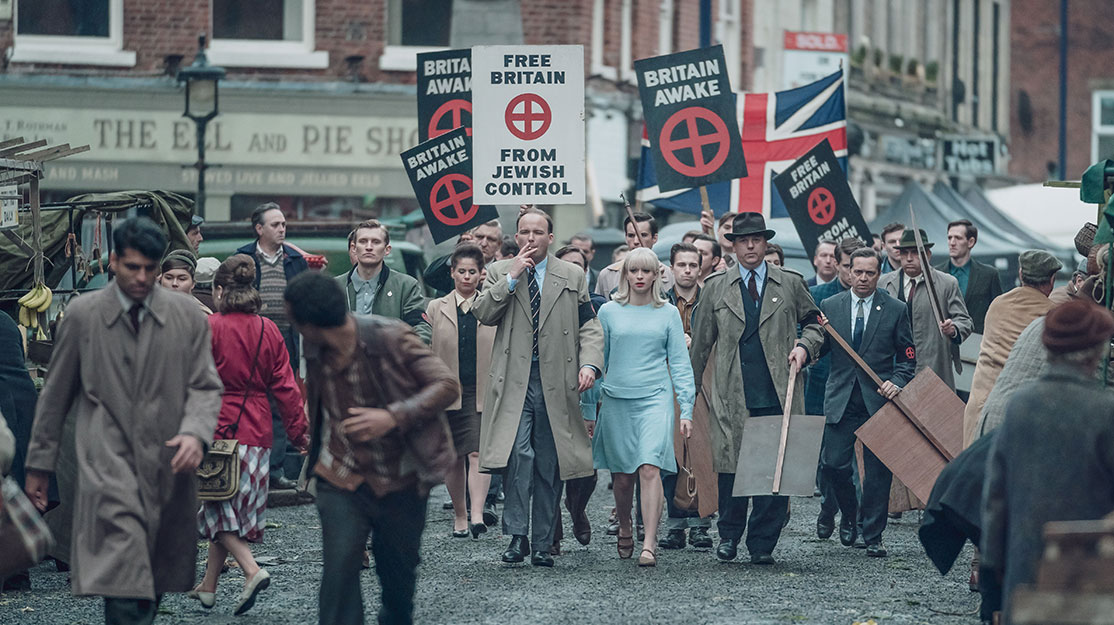 A walk down Ridley Road

As an actor, Sarah Solemani has starred in films including Bridget Jones’ Baby and Mrs Henderson Presents, while her television credits include Him & Her, The Wrong Mans, The Five and No Offence.

But behind the scenes, Solemani has enjoyed a writing career that has run alongside her work on stage and screen. As a member of Cambridge University’s Footlights theatrical group, she honed her craft writing and starring in its fortnightly performances before she embraced London’s theatre scene, doing plays in pubs and then at the Old Vic or Royal Court where her work would regularly be subjected to the scrutiny of a live, paying audience.

“It’s not enough that your friends and family think you’re amazing,” she tells DQ from her home in LA. “I remember writing a play and I was crying my eyes out, but it was the most incredible thing I’d ever seen in my life when I turned around and half the audience had gone. Those that hadn’t gone were asleep. I needed to figure out how to connect to an audience, and that’s how my craft has gone from theatres above pubs to now multi-million-dollar productions. It’s audience first.”

Solemani hopes to have found that connection with her first original series, Ridley Road. Inspired by the struggle of the 62 Group, a coalition of Jewish men who stood up against rising neo-Nazism in post-war Britain, the four-part thriller centres on Vivien (played by newcomer Agnes O’Casey), a hairdresser from a Jewish family who follows her missing boyfriend, Jack (Tom Varey), from Manchester to London in the Swinging Sixties. When she discovers he has infiltrated the far right Nationalist Socialist Movement (NSM), she decides to join him undercover and risk everything for her beliefs and for the man she loves.

“Nazis are often presented as monstrous, automaton, zombie-like people who have no relation to humanity, but I wanted to really get into the psyche of the far right and find out how good people get convinced of bad ideas,” she explains. “Even NSM leader Colin Jordan [Rory Kinnear], who at the end says, ‘All of this is for my son. I just want a better world for my son.’ Part of my connection with my audience is going deep into the psyche of characters that really are villainous as truthfully as I can.”

Ridley Road is based on the novel of the same name by Jo Bloom, which itself is rooted in real events of the time and explores the contribution made by the Jewish community to fight racism. Solemani found it to be a “fascinating” insight into a little-known part of British history, seen through the eyes of a young woman. But despite sharing the same initial premise, by the end of episode one the series takes Vivien beyond the novel and further into the world of fascism when she begins her undercover operation and meets Colin in person.

“What I can’t stand in films and TV is you get some young, pretty girl who is out of her depth and suddenly she’s high-kicking and beating some ass – but that wasn’t who she is,” says the writer, whose credits include Barry and Made for Love. “What are her skills and how could she use those to infiltrate the far right? No-one takes her seriously, she’s a young girl, it’s 1962, she’s dismissed. But how would she use that to her advantage, and also what mistakes would she make? How would her naivety trip her up and put her in danger? That was where I saw I could take the show.”

The irony of this period drama is that many of the recurring themes about fascism and anti-semitism in the series are still prevalent today. “Everything my NSM characters say, you could hear now,” Solemani notes. “Nothing they are saying is bound to that period. As a Jewish neurotic, I’m living in a fascist dystopia pretty much every day, so when the storming of the Capitol [in Washington DC] happened, I was like, ‘Oh yeah, that’s what happens.’ I’m actually surprised it wasn’t worse because this is what I’ve been expecting.”

Produced by Red Production Company for BBC One and distributed by Studiocanal, the project dates back to 2016 when Solemani starred in Harlan Coben’s mystery thriller The Five, which was also made by Red. She spoke about Bloom’s book to executive producer Nicola Shindler, who has since left Red to start up Quay Street Productions, and the following year they optioned it and started developing the series.

“It’s been a long process, honing the script and getting the right cast together. Meanwhile, it became more and more relevant,” Shindler says. “When we started talking about it, it felt like a fascinating piece of history and we don’t often look at history from a female point of view. But much more than that, it’s a really important message for today. Nothing’s gone away. Though the politics are very different from what they are on Ridley Road, fascism and anti-semitism in British culture is still here. It just became more and more relevant.”

After taking the decision to focus on Vivien, Solemani and Shindler faced the prospect of her becoming a side character if she didn’t become an active part of the political scene portrayed in the show, so they looked at how they could evolve her story beyond the novel. When Solemani uncovered details of a real-life couple who infiltrated the NSM, they found a way to continue her journey into this unknown world.

Working with Solemani, Shindler says her job as an executive producer is to “get the best script, the best story and the best cast together.” She adds: “Sarah’s got such a brilliant voice and had the passion to tell a story and what I helped her with was trying to frame and structure the story. What I like to do is listen to what the writer wants and make sure that translates all the way through production and on to the screen. We also had a brilliant director in Lisa Mulcahy, who came onboard with the same instincts to tell the story in the most exciting, original way. We talked about how the look and the feel of it has to be modern and it’s got a pace about it and an energy to the storytelling, which just feels really en pointe with what Sarah wanted to do in the first place.”

Having worked with Red on Russell T Davies’ Years & Years, Mulcahy saw the company’s tweet about making Ridley Road and secured an interview with Nicola and producer Betsan Morris Evans, drawn to the project by its mixture of history, real events and a story set in an unknown world.

“Working on really good writing is what I always aspire to do, and the script was great,” she says. “It had so much potential – a thriller and a love story.”

Beyond Ben Smith’s production design, which recreates the style and tone of 1960s London, the sense of the period is further amplified by the use of archive footage through the series – a decision that was inspired by the discovery of real footage of a riot in London’s Trafalgar Square that forms part of Ridley Road’s first episode. It is also used in sequences featuring Soho and a country estate.

“When we were able to get colour footage of the riot, we knew, in a JFK way, we wanted to intercut between our footage and their footage,” Shindler says. “Lisa so cleverly staged the whole thing so we could use that footage, she knew exactly where she wanted to cut in and what footage she wanted to use before we started shooting, which made it more manageable. But it’s not there to look like a technique. It’s there to enhance what we’ve got already.”

“It wasn’t just to remind us this was what the 60s was like,” Mulcahy continues. “I wanted to use it in a way that would tonally work for what was happening to Vivien at that time. When we did go to shoot those sequences [featuring archive footage], we shot in 16mm as well as our digital footage. Sometimes I have to ask myself, ‘Is that archive?’ It works beautifully.”

The practical challenges of recreating 1960s London on location in Manchester, and staging large-scale set pieces like the riot were further complicated by the Covid-19 pandemic, which forced the UK into its first lockdown two weeks before filming was due to begin in March last year. Production eventually started in September but was forced to pause twice before it wrapped in January this year.

Mulcahy wasn’t originally set to direct all four episodes, but the impact of Covid meant the production wouldn’t be able to return to its numerous locations during the show’s planned second block of filming. “We just had to go in there, shoot them out. With two directors, that would have been impossible. So I just ended up doing the whole thing,” Mulcahy says.

“We had an incredibly heavy schedule. We had eight hours to shoot the Trafalgar Square scene, and that scene is intense. It’s tight, everyone’s close. But we had three units out that day. We also had our 16mm camera. These things just have to be organised with military precision. We just absolutely went for it and everybody was brilliant.”

Across the series, which begins on Sunday, Vivien journeys into “the spider’s web” at great personal risk to herself, “but once she realises she can make a real difference and that, as a woman, she has an ability to get further into the organisation in a different way to Jack, then she puts herself further and further at risk until a brilliant, thrilling conclusion,” Shindler says.

“The deeper she gets, the more she wakes up and the more she’s enlightened to what’s happening and the mistakes that her family and the people around her have made,” Solemani notes. “There’s a point in the show where she doesn’t have the 62 Group’s backing because there’s only so far these underground activist organisations can take you. Then she becomes a lone wolf and she’s on her own. Agnes just totally knocked it out the park – it’s a massive role, a massive journey. She starts from this place of vulnerability but she’s got to contain this deep strength in order for us to watch. She delivers it.”

The show’s parallels with contemporary politics mean Shindler also hopes it promotes a message that people can’t become complacent about racism and anti-semitism. “There are inequalities all through society we need to be sure to keep out and that women have an important role to play in the tackling of this,” she says. “There’s also a very clear message from Eddie Marsan’s character, which is ‘anti-fascists do.’ It’s about standing up and make your point, don’t just sit back and say, ‘Isn’t that wrong?’ Stand up and try and make a difference.”