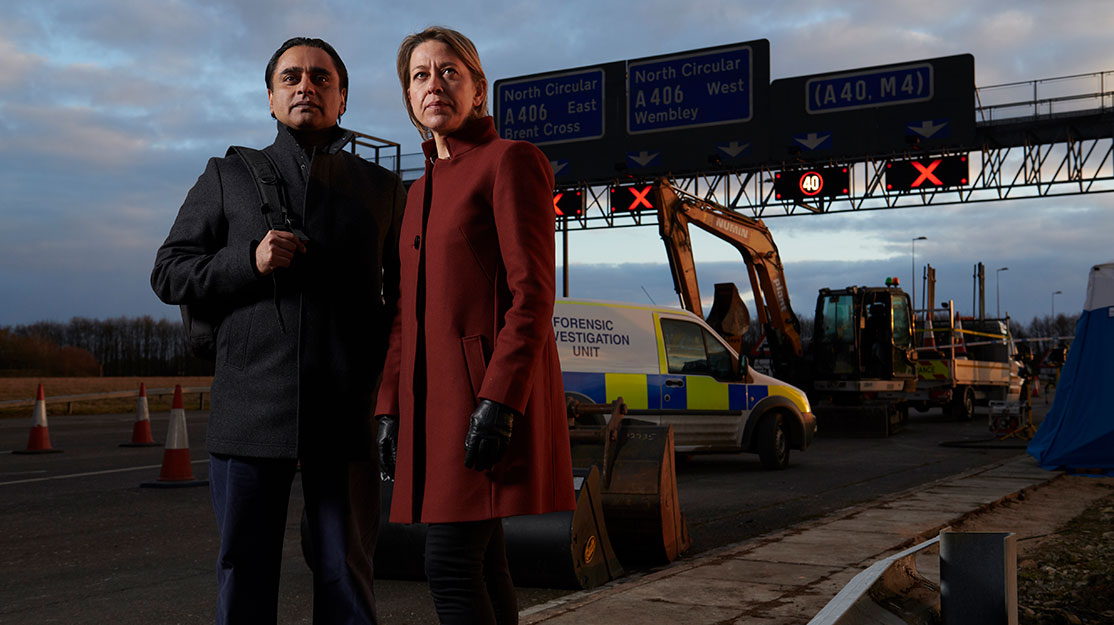 A walk down Mainstreet

Mainstreet Pictures co-MDs Sally Haynes and Laura Mackie tell DQ about making the third season of crime drama Unforgotten, the trouble with in-demand writers, and their aim to produce television people want to talk about.

Unforgotten is the quiet star of the television crime genre. It is unshowy and patient, yet each season boasts a gripping storyline, ducking and weaving until it lands an emotional right hook that can floor even the most hardened viewer.

At once about the police investigation into a historic crime and also the ‘family’ of potential suspects introduced early on, the ITV series, written by Chris Lang, keeps you guessing until DCI Cassie Stuart and DI Sunny Khan – played by Nicola Walker and Sanjeev Bhaskar – piece together the clues before a devastating denouement.

The show returns for a third season this Sunday that will again see the duo delve into an emotionally charged cold case. The new season sees Alex Jennings (A Very English Scandal), Kevin McNally (Designated Survivor), Neil Morrissey (The Good Karma Hospital) and James Fleet (Indian Summers) play a close-knit group of old school friends who have stood by one another through thick and thin. But when the body of a teenage girl who went missing at the turn of the millennium is found at a building site, the four men find themselves and their relationships in the spotlight.

And though the crime at the heart of the story may be several years old, the characters also face more topical themes such as the stigma around mental health problems and the dark side of social media.

Distributed by BBC Studios, Unforgotten comes from Mainstreet Pictures, and was the first series produced by the label set up by former ITV drama heads Laura Mackie and Sally Haynes in 2013 after they both left the broadcaster. They have since gone on to produce another ITV miniseries, Paula Milne’s domestic horror HIM, while BBC drama Age Before Beauty, written by Debbie Horsfield (Poldark) and set in a Manchester beauty salon, will air this summer. They also recently won another BBC commission for Gold Digger, written by Marnie Dickens (Thirteen).

Unforgotten, however, is in that unique sweet spot. With two seasons behind it, the show is a bonafide hit – six million people watched the second run – and everyone involved in making the series now knows what the finished product should look like.

“It’s interesting with Unforgotten this year because Victoria [Fea, senior drama commissioner] has looked at all the cuts, but you do get to the point where a show knows what it is,” says Mackie. “It has its DNA and it’s a much faster process. We’ve got into the groove of what that show is and if it ain’t broke, don’t fix it. It’s very much a different story but remains an emotional genre piece, particularly this year.”

Speaking to DQ inside their Holborn office in central London, it’s clear Haynes and Mackie have a lot of love for Unforgotten. “It’s our first child,” says Mackie, who notes that the third season is slightly unusual in that one director, Andy Wilson, has steered all six episodes.

But above all, “it’s a very deceptively simple format,” she says. “The clever thing about it is when Chris pitched it to us, he understood you need a satisfying whodunnit plot but he also wanted to look at society and different families and the secrets and lies within families. And that’s the format, whether it’s dealing with the characters of the age of Tom Courtenay in season one, a younger cast in season two or the suspects in season three who are all friends and it’s a slightly more notorious case. That gives it a slightly different feel.”

As Haynes notes, “it’s hard to find a gap in the crime genre without going to jazz hands or alien detectives.”

Some shows might do that, but it’s hard to imagine Cassie or Sunny breaking into song and dance midway through their investigation. Instead, it’s hard to recall a pair of more down-to-earth and unflashy detectives on screen, and the tender relationship they share is always at the heart of the drama, whatever case they are investigating. Haynes admits there’s something “rather wonderful” about the pair’s bond. “It’s very subtle and very sweet but it’s very engaging. Nicola is stunning.”

“Cassie’s an empathist – she just quietly gets on with the case and I think people have liked the fact that, in a world where there are a lot of quite noisy crime shows, this is quite a quiet show but probably better for it because it feels a bit different,” Mackie adds.

Mackie and Haynes, co-MDs of Mainstreet Pictures, both worked together at the BBC, where their credits included Cutting It and Bleak House. They then made the move to ITV, where Mackie was controller of drama and Haynes was director of drama commissioning, responsible for series including Scott & Bailey, Vera, Endeavour, Appropriate Adult, Broadchurch and Downton Abbey.

Now five years after leaving the broadcaster, their aim at Mainstreet is to produce edgy shows that appeal to a mainstream audience. “Our ambition is to make big shows that people talk about,” Haynes says. “A lot of the shows we greenlit at ITV, that’s our taste – Downton, Broadchurch, Appropriate Adult. I love making shows for a lot of people to watch.”

Mackie picks up: “We’re both populists and there’s nothing wrong with that. We don’t want to do more of the same and not everything’s going to work. We did HIM; it probably wasn’t right for ITV and perhaps could have sat more comfortably on another channel, but you don’t always know. You have to go with your gut.”

Having overseen Downton’s extraordinary success both at home and around the world, the pair say they have two period dramas in development as they look for a gap in a genre that is seemingly a constant presence on British television, whether it’s The Miniaturist, Little Women and Poldark on the BBC or Victoria and the forthcoming adaptation of Vanity Fair on ITV.

“When we commissioned Downton, there was no period apart from a couple of classic adaptations – we did Wuthering Heights with Tom Hardy and Charlotte Riley,” Mackie continues. “It was the era that, every autumn, we did classic adaptations. When Julian [Fellowes, Downton creator] and Carnival brought us Downton, period drama wasn’t in vogue but we really liked it. I still remember when we read that script and we said to each other, ‘I love it.’

“When we’re developing, we have to try to find something that’s so obvious, you can’t believe it hasn’t been done before. They’re the best ideas, but they’re hard to find. Gold Digger has a real voice to it but that’s very much our taste; Age Before Beauty and Unforgotten too. All you can go on is your gut.”

The duo waited three years for Horsfield to find the time in between seasons of Poldark to write Age Before Beauty. The show’s long development process exemplifies one of the biggest challenges facing UK drama, namely the reliance on a top tier of first-class writers.

But when it comes to finding writers to work with, Mackie argues you must look beyond the usual suspects. “We’ve got Debbie and Chris but people get booked up,” she says. “We had to wait for Debbie because she’s writing Poldark. So you have to look at writers of all levels. We both started as script editors, so we love finding new writers.”

The bigger difficulty, they claim, is the lack of opportunities for writers to cut their teeth on long-running serials. “When we were at ITV, there was Heartbeat and The Bill and various other things,” Mackie continues, noting that commissioners are still drawn to series that carry one author’s voice. “But new writers like Marnie are being given opportunities to write their own authored stuff. It’s not easy, but I think broadcasters are open-minded if the project is good and it’s with a company they think can support it.

“Some writers could just do with time on series, because it’s hard. But there’s always room for people coming through. You can’t just rely on the usual suspects, because they’re all too busy.”

It shouldn’t be hard to draw Lang back for a fourth season of Unforgotten, with Mackie and Haynes teasing that the writer already has a story in mind.

For Haynes, the show’s success boils down to its simplicity. “It’s an emotional story that is also a genre piece,” she says. “I’ve read every script dozens of times, watched every cut dozens of times and still have a cry.”

Mackie adds: “Because Chris wanted to write about the suspects and their lives, it does allow you to tell a family drama or the stories you don’t have room for in a traditional crime drama. Cassie and Sunny are also deceptively ordinary, and ordinary is hard to do. It’s an emotional thriller.”