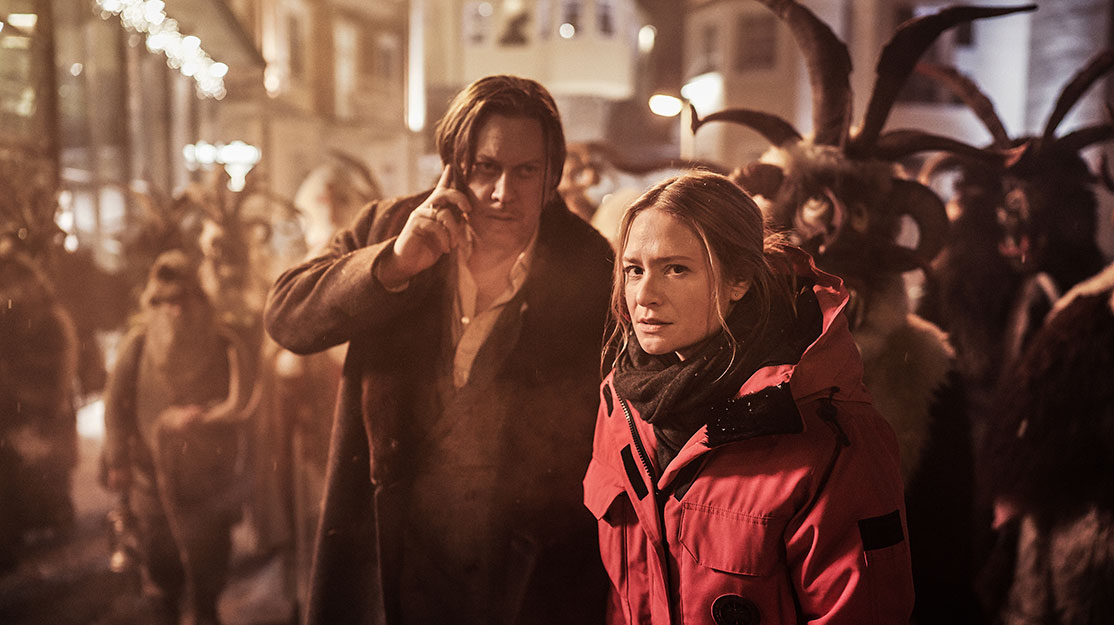 Der Pass (Pagan Peak) is latest drama to take inspiration from Scandinavian hit The Bridge, putting a German/Austrian spin on the cross-border crime format. But, as the producers tell DQ on set at its mountainside filming location, this is a completely new story.

Despite becoming a global hit in its original form, Scandinavian crime drama Bron/Broen (The Bridge) has spawned several local adaptations. First there was The Bridge, set on the border between the US and Mexico; then The Tunnel, pairing the UK and France. There is also another version set between Russia and Estonia. So a new German/Austrian adaptation may not seem the most original contribution to the golden age of TV drama we are currently enjoying.

But when you find out the producers of Der Pass (or Pagan Peak, as it will be known in English) are Max Wiedemann and Quirin Berg, responsible for Netflix’s cult genre-bending hit Dark, as well as the hugely respected Oscar-winning film The Lives of Others, it’s hard to be so flippant.

“We didn’t want to just remake a series that’s already been remade twice,” says Philipp Stennert, one half of the directing/writing team, the other being his long-term collaborator Cyrill Boss. Together, they recently made Rivals Forever – The Sneaker Battle for ARD, a miniseries about the two brothers who separately created the Adidas and Puma brands during Nazi-era Germany.

“Apart from the premise of two countries working together and finding a body on the border, everything else is pretty much a completely new story,” he says of Sky Germany’s new eight-part series, which is distributed globally by Beta Film.

In keeping with the original format, the story centres on the discovery of a murder victim on a snowy mountain pass between Austria and Germany. But the most striking difference from the original is the role of the serial killer in Der Pass. Broen was a ‘whodunnit,’ with the detectives from either side of the Swedish/Danish border spending season one trying to find out who is culpable for the atrocious and often spectacular deaths. But in Der Pass, we find out the killer’s identity early on, and thus he plays a far larger role in the series as a whole. “We’re so interested in this evil that we wanted to follow it – how do they work and what drives them?” says Stennert.

The creative team spent a lot of time researching serial killers (slightly disturbingly, hundreds of interviews with the most notorious of them, such as Charles Manson, are available online) and they worked closely with Germany’s top criminal profiler to develop the character. Franz Hartwig, the actor who plays Gregor Ansbach, Der Pass’s serial-killing IT expert, was profoundly affected by playing the character.

“It’s really weird. I came to a point that I actually understood him and liked him,” says Hartwig. “His ideas totally make sense but unfortunately he choses completely the wrong means of achieving them.”

Indeed, on the set of the series, DQ is confronted by the aftermath of one of Ansbach’s most devastating crimes. With sirens wailing and hundreds of extras playing members of the public, the police and ambulances services are all covered in a horrible grey dust as they flee an explosion in a fictionalised mall on the outskirts of Salzburg, Austria. Out of this apocalyptic scene, on a brief but apparently much needed espresso break, emerges Nicholas Ofczarek, who plays Austrian police officer Gedeon Winter.

“Gedeon’s given up, he’s cynical,” he says of his character. “He’s addicted to everything – alcohol, uppers and downers – and to pay for these addictions, he’s got involved in organised crime. He’s a good cop but he’s wasted.”

However, the case sparks something in Gedeon that gives him a desire to atone for his former failings, as does his relationship with his German counterpart, Ellie Stocker, played by Julia Jentsch. “She gives my character a perspective in his life and in his job, a faith in humanity,” says Ofczarek.

But unlike the heroine of Broen – Saga Noren, who is socially awkward to the point of showing traits of Asperger syndrome – Ellie is “very in touch with herself and the humans around her,” says Ofczarek. In Broen, the male detective Martin was the happy-go-lucky one. In Der Pass, everything is reversed. Ellie presented the biggest writing challenges. “It was very hard to write a character who is truly good but also interesting,” says Stennert. But over the course of the investigation, Ellie and Gedeon’s roles switch.

Then there is the scenery. The Alpine border between Austria and Germany is, by any standards, one of the most beautiful locations in the world. But working 2,600 metres up the side of a mountain in up to half a metre of fresh snow every day was not without its difficulties. “The snow and the mountains are 40% of the show,” says Stennert. “Part of you thinks, ‘Oh no, we have to shoot in that again, it’s going to be really tough,’ but the other half is thinking, ‘This is going to look so good.’”

Following Deutschland 83/86, Ku’damm 56/59, Berlin Babylon and Dark, Germany is now enjoying a newly earned reputation as a contributor to the best TV drama coming out of Europe. In this new, exciting industry you have to take risks and be bold – and go against Germany’s stereotypically risk-averse nature. “Sky’s drama department felt that something, between the producers, the authors and the cast, came together,” says Carsten Schmidt, CEO of Sky Germany. Then it was time to “make sure high production values are available, put confidence in it and not question it.”

Producers Wiedemann and Berg have played no small part in raising the bar for the German industry, not only with Dark but also other highly respected recent productions such as TNT’s gangster drama 4 Blocks and neo-Nazi-focused miniseries Mitten in Deutschland: NSU (NSU: German History X). But interestingly the super-producing duo also make episodes of the show that most symbolises Germany’s traditional TV drama output: Tartot. To many, the hour-long crime series, which has been running for decades, and which features a new, neatly wrapped-up storyline each week, sums up everything the German industry should be trying to get away from.

“Tatort is like coming home; it gets the family together, it’s a great German icon. We’re very proud to be a part of Tatort,” says Berg. “Some shows attract a broad audience, some are niche. You shouldn’t compare disciplines that are very different. I love that, in TV today, there are so many different things going on.”

It seems that one of the keys to the success of Wiedemann and Berg lies in their questioning of accepted norms. Likewise for viewers sceptical about another remake of The Bridge, it may well turn out that Der Pass is the series they most eagerly binge-watch in 2018.