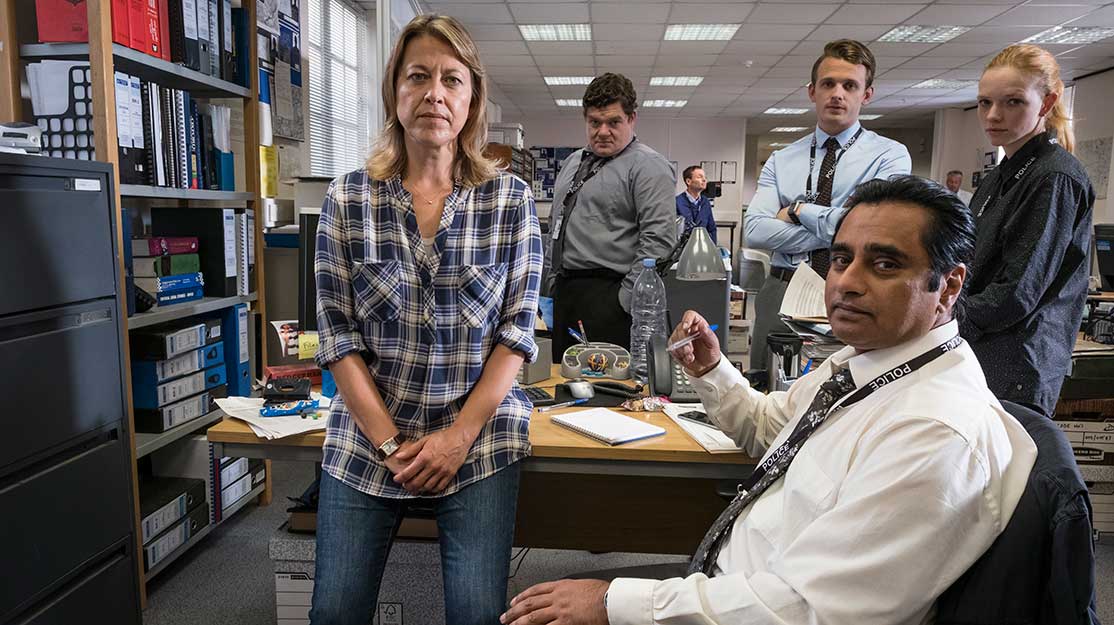 Critically acclaimed crime drama Unforgotten is back for a second season on ITV. Sanjeev Bhaskar tells DQ why starring in the series is a “pure joy.”

Sanjeev Bhaskar might be best known for comedy turns in series such as Goodness Gracious Me and The Kumars. But with the launch of the second season of crime drama Unforgotten, he’s quickly strengthening his reputation as a ‘serious’ actor.

“It’s nice to have done a returning series that’s also a primetime drama,” he tells DQ. “That’s been a pleasant surprise. I remember saying to Meera [Syal, his wife and fellow actor] before the first season went out that there will be one or two reactions about me. People will either be saying, ‘I told you he couldn’t act!’ or they’ll be saying, ‘I didn’t know he could act.’ I think, by and large, it was the second one!

“You’re always chasing work and hoping you can do the best job you can, but in a project that’s as good as it can be. So to be in something that’s really good and has been as warmly received [as Unforgotten] is the real joy. The fact it’s a drama is incredibly satisfying, but mainly because it’s good drama.”

The story begins with the discovery of a man’s body, perfectly preserved in a suitcase at the bottom of the River Lea in north-east London. Then as Cassie and Sunny begin the complicated task of identifying the victim, viewers are introduced to four unconnected people – a lawyer, nurse, teacher and another police officer – who are suspected to be linked to the victim in some way.

Season two follows firmly in the footsteps of the hit first outing, which averaged around 6.5 million viewers across its six-episode run and was sold into 126 territories around the world by distributor BBC Worldwide. The plot saw Cassie and Sunny team up to uncover the truth about the murder of a boy in 1976, slowly revealing how four potential suspects – played by Trevor Eve, Ruth Sheen, Bernard Hill and Tom Courtenay – were linked to the crime.

“The reaction to the first season was just lovely,” says Bhaskar. “It’s rare to have as much of a consensus as that across both critics and social media – people really do let you know what they think of your programme in very clear terms.

“It was great, and it was lovely to have that chance to come back. Much of the team was the same as well. A lot of the reasons why that first season worked, outside of the great script and director, is the behind-the-camera team, because it’s shot really well, so to get as many of those people back who wanted to work on it is hugely flattering.”

Bhaskar describes the multiple strands of Unforgotten as four mini-dramas that all come together as part of a ‘whodunnit’ mystery – and says that structure was key to its popularity.

“Any one of those stories could have been a drama in and of itself. Particularly for me, the story Ruth Sheen and Ben Bovil have about a mixed-race relationship with a lost child and then to discover she had been a racist member of the National Front – that was like a [This is England creator] Shane Meadows-esque story waiting to happen. You could have easily done six episodes on that. So it was incredibly rich in terms of the dramas within it, and the detectives weren’t the focus of the drama.

“We were there to enable those other stories to happen and to move between them – and, in effect, to be the audience. Traditionally, the Americans have always been really strong on plot, particularly in detective shows where the plots are intricate and fast-moving. The British have always been really good at character, and that combination of Unforgotten being a whodunnit but actually a character study I thought was an interesting new take on the genre.”

Bhaskar goes on to say that the most remarkable aspect of the show for him wasn’t the gruesome details of the murder or the shocking revelations at the season’s end, but rather the ordinariness of the two detectives leading the investigation.

The actor continues: “We were empathetic and sympathetic, as opposed to us being Sherlock Holmes or being geniuses in some way. That wasn’t the point of the story. There was a point at which I was reading the first script when I forgot I was auditioning. I just thought it was really interesting – I was reading it like you would do a novel. That’s testimony to Chris’s writing.”

A major theme of season two is society’s relationship with evil, with Lang’s script questioning when a good person becomes defined as a bad person, and at what point a child stops being excused for their crimes and is labelled as evil. Bhaskar explains that the new story is likely to fuel debate and disagreement as the new plots unravel towards the season’s end.

“When I was reading the script, every 20 pages or so there would be an opinion I either agreed with or disagreed with – I’ll be really interested to see what the public think of that because I don’t think that was as pronounced in the first season,” he says. “It was interesting to read it because, like with any good piece of writing, you think, ‘Do I agree with that?’

“That notion of the relationship with evil is, does an evil or heinous act define an evil or heinous person? For some people it does. If you do something that’s really horrible and evil, then you are a horrible and evil person. But other people would say it depends on the conditions. There’s neither right or wrong really. They’re both opinions and in that way, there are moments across the series where the opinion of what you would do or think in their shoes shifts and that’s really interesting.”

It’s those moral questions that provide added tension to Cassie and Sunny’s relationship as they often reveal differences of opinion, making their partnership more challenging than in season one.

The same can’t be said for Bhaskar and Walker’s relationship off-screen, however, as the actor admits he “absolutely adores” his co-star, whose other credits include River, Last Tango in Halifax and Scott & Bailey.

He reveals: “When we did the first season, there was a point when she said to me, ‘We’re surrounded by Tom Courtenay, Gemma Jones, Bernard Hill, Trevor Eve, Ruth Sheen – this is incredible.’ And to me, she was part of them! So I’m surrounded by them and her.

“There’s a wonderful feeling when you admire somebody and you meet them and you just adore them as well for who they are as a person, so I don’t think I could love her any more than I do. The weird thing about chemistry is I can’t tell if it’s there or not. I can’t be objective about it, but a lot of people seem to think it was there and all I do know is she’s great, I adore her and we really get on. So working with her is incredibly easy.

“She is one of the most instinctive actresses I have ever seen and it’s great to be in scenes with because she absolutely owns the words in a way that doesn’t seem like she’s just remembered them off a page, and that’s because with her sense of timing, her instincts about how to play it, nuance and everything else.”

Bhaskar is now relishing the time he will be spending on the set of feature-film sequel Paddington 2, and is also working on “various writing things and ideas.”