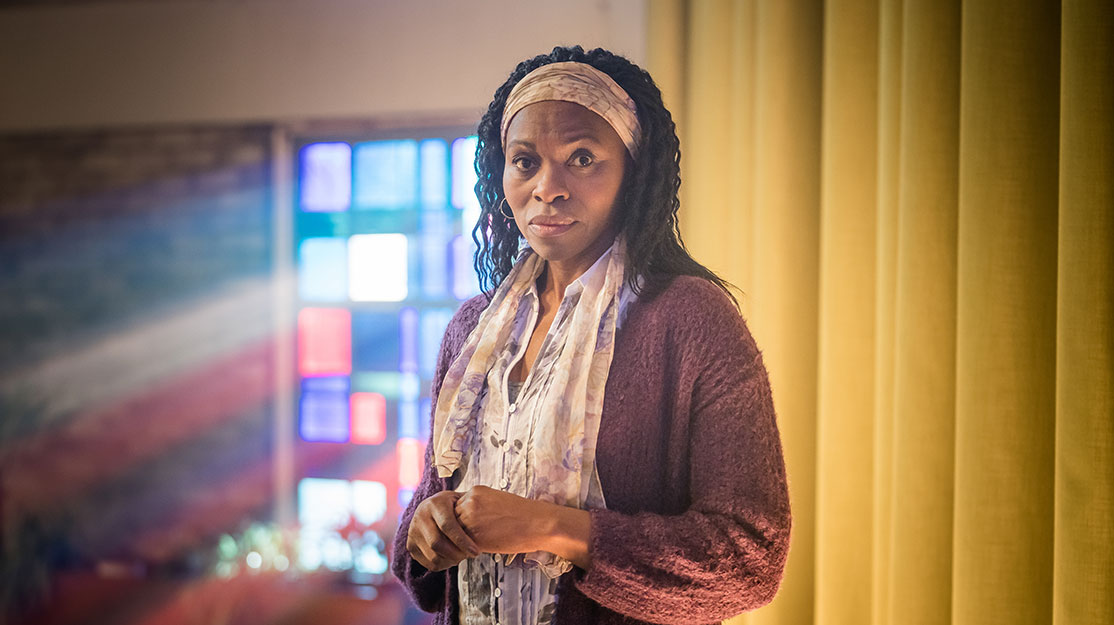 A life worth living

British actor Rakie Ayola speaks to DQ about her award-winning turn in BBC drama Anthony, which imagines the life 18-year-old Anthony Walker might have lived had he not been murdered in 2005, and explains how she got into character to play his mother Gee.

When Rakie Ayola was first sent the script for Anthony, a BBC TV film that imagines how Anthony Walker’s life might have turned out had he not been killed in a racist attack, she wanted to know whether his mother – whom Ayola would be playing – was involved in the project.

The unique structure of the drama means viewers first see Anthony (Toheeb Jimoh)’s imagined future in his 20s – supporting his alcoholic, homeless friend, getting married and having a baby – as time marches backwards to the real-life moment the 18-year-old is attacked by two men in a park and left for dead after being struck in the head with a pickaxe.

“When I was sent the script, I thought, ‘Oh my goodness, if his family, particularly his mother, has nothing to do with this, then this is awful, we can’t do this,’” she tells DQ. “I rang my agent and said can you find out if his mother’s involved and she made a call and came back and said apparently she is.

“I then met [director] Terry McDonough and as soon as I sat down, I said, ‘Does his mother know that you are doing this?’ and he said, ‘It was his mother’s idea.’”

Indeed, it was Gee Walker herself who first approached screenwriter Jimmy McGovern (Time, Moving On) with a view to celebrating Anthony’s life on screen. Ayola subsequently took on the role, and her performance in the drama, which is produced by LA Productions and distributed by ITV Studios, recently resulted in her winning Best Supporting Actress at this year’s Bafta Television Awards.

Growing up in Liverpool, Anthony was a devout Christian who loved basketball and was known for his humour, intelligence and compassion. He was studying at college with dreams of visiting the US and studying law at university when he was murdered in July 2005. The year after his death, Gee established the Anthony Walker Foundation to work to tackle racism, provide educational opportunities and victim-support services, and promote equality and inclusion for all.

Production on Anthony began in December 2019, with a view to airing the film on BBC1 around the 15th anniversary of Anthony’s death. Ayola, whose screen credits include Holby City, No Offence and Noughts & Crosses, had spent that year on stage “playing distressed mothers” in four different plays before starting work on Anthony, which marked the first time she had played a real person on screen.

“This was very new to me,” she says. “There’s a layer to it that makes it really interesting for an actor, because normally you’re trying to find the similarities in a fictional character between yourself and anyone else who you know. But to have the person you’re playing there, with loads of footage of her on YouTube, it’s a huge challenge because if the person is living, you don’t want them to disown you at the end of it and say you’ve told this story all wrong and cast it badly. There’s some pressure there.

“But aside from that, it’s a gift because the person is there. I often get quite involved in how characters sound. That always preoccupies me. The thing with Gee is her accent is made up of all the places she’s ever lived – Jamaica, Liverpool, and then I found out she spent some of her childhood in Coventry.”

Though Gee Walker instigated the project, Ayola didn’t meet her until the first script readthrough, with the actor admitting she had been “too afraid” to speak to her beforehand. It was then while reading the script with the rest of the cast that she became all too aware of Walker’s presence in the room.

“I thought I’d got my head around that but as we read beyond the fictional version of Anthony’s life into what was real, I suddenly became so aware [of her],” she says. “I was virtually inaudible because I didn’t know if the thing to do was just take all the emotion out of every scene and just say the lines or try to perform as well as possible, but that didn’t seem right either in front of the woman who had gone through that.

Through the first two-thirds of the film, which portrays the imagined events of Anthony’s life, Ayola features sporadically as the story focuses on Anthony’s support and love for his friends and his family – his wife Katherine (Julia Brown) gives birth on a train – and his infectious, joyous personality that inspires the young basketball players he coaches.

It’s then during a scene late at night when fiction meets fact as Anthony unknowingly says goodbye to his mother for the last time, as he walks to a bus stop with his then girlfriend and his cousin before they are chased into a park by two men. Anthony was struck with an ice axe while his girlfriend and cousin called for help.

Gee then becomes the focus of the story, from being told to go to the local hospital and her anxious wait for news, unaware what has happened to Anthony, to the moment Ayola, in character, sits reflectively in a chair, only to be replaced on screen by the real Gee Walker.

“In Jimmy’s script, everything that happens in the last third, from the moment Anthony leaves the house, is as Gee relayed it to him, so I didn’t need to ask her about that,” the actor says of her preparation for the role. “I knew from the words he put on the page what had gone on for her there. Everything in the first two-thirds was fictional, so I certainly wasn’t going to ask her how she might have felt at his wedding. I can’t think of a more insensitive thing to do, so I didn’t need to ask her about any of that.”

In the same way some actors have natural comic timing, Ayola says she has always been able to access her emotions, and the highly emotive roles she had played on stage earlier in 2019 meant she was “match fit” by the time she came to film Anthony.

“It was four straight weeks, so there was no messing about,” she says of filming. “It was great. The joyous scenes, the wedding reception, the moments with the kids – it was all lovely. But it was always with this sense of sadness because we knew it hadn’t happened for him. Even while as characters we were investing in the joy of each moment, as actors we were aware that none of that had happened. There was always a layer of sadness over everything, even while we were enjoying the scenes as we played them. Somebody at some point would always say, ‘I can’t believe he didn’t get to do this.’ That was always there.”

What’s notable about the fictional scenes of Anthony’s life is just how normal they are, as we see him meet his future wife, get married and become a father. “They are everyday things, things Gee wanted to see,” Ayola continues. “She was on set when we shot the wedding reception. We were dancing away. Then at the end of the day, I went across to her and she said, ‘Toheeb and you dancing together in the middle of the circle, that’s how it would have been for Anthony and me.’ Then you go, ‘Wow, you’ve sat here all day and that thought’s been in your head that it would have been like this to be at his wedding.’ It’s huge stuff.”

Collecting her Bafta award at a ceremony held last month, Ayola described Anthony as an “extraordinary project” and a career highlight, before thanking Walker for her “bravery and the strength to ask Jimmy McGovern to write your son’s story to celebrate the person that Anthony Walker should have been and never was.”

The actor believed she had missed her opportunity to work with McGovern, having only once previously auditioned for one of his shows, so the chance to link up with the award-winning writer on Anthony was “huge.” But the project also stood out to her for the chance to tell Anthony’s story in this unique way and the opportunity to play his mother, “a woman you can’t help but admire.”

“I get to play this extraordinary person and tell this beyond-tragic story but tell it in a way where there’s hope,” she says. “We allow you to understand what was lost; we allow you to understand how many people lost something through Anthony’s death: his mother, his family, his community but also the perpetrators. They were always going to be caught so they were always going to lose, so you see that as well. You see the craziness of their decision-making in that moment and how it’s beyond tragic and beyond senseless.”

The role also came at the right time for Ayola, who had spent 2019 “shedding skin emotionally, so my emotions were very close to the surface,” she adds. “In terms of where I was professionally, it was the right time to play that part. I was match fit for that part.”

Following her Bafta win, Ayola was reunited with Walker at the Liverpool base of LA Productions, which has previously partnered with McGovern on Moving On, Care and Broken. The pair had been messaging each other but had not seen each other in person since the production wrap party where they shared a dance together.

“It was lovely to see her,” Ayola says. “She still hasn’t seen the last third of Anthony and I hope she never will. She just likes to watch the fictional bit and then she stops. She doesn’t need to see the rest. But it was lovely to see her. She’s one of those people who you suddenly find yourself telling her how wonderful she is. It must drive her crazy. She’s just warm and generous and just a lovely woman. She still calls me her TV twin, which is the biggest compliment anyone could pay me.”

Gee Walker’s own words also formed part of Ayola’s Bafta speech, as she once told the actor that the only reason she wanted her son’s story to be told is because she thought people intent on committing a similar attack to the one that killed Anthony might watch it and think about it long enough for someone to get away.

“Gee was amazed I’d remembered she’d said that,” says Ayola, who has more recently appeared in ITV’s Grace and BBC drama The Pact and will next star in the second season of Amazon Prime Video’s Alex Rider.

“I hope people are able to invest in Anthony enough from Jimmy’s script to understand what’s been lost and who’s been lost, and it would be wonderful if people could just think about it. I know that in the moment, the young person going out with a knife in their pocket is trying to take care of themselves, they’re doing that for their own safety and security and feel they need to do that. I’m trying to understand that, but I’m hoping they will understand whatever they think they’re protecting themselves from will catch them anyway. You might get one over on the other guy but then the law is going to get one over on you. You’re never going to get away.”

That’s why she thinks Walker said those words in an “off the cuff” moment they shared together. “She had it in her head that his cousin and his girlfriend at the time were able to get away and he wasn’t able to get up off the floor in time,” Ayola says. If Anthony’s story gives someone else the chance to get away from a similar attack, “that’s as much as she was hoping for.”