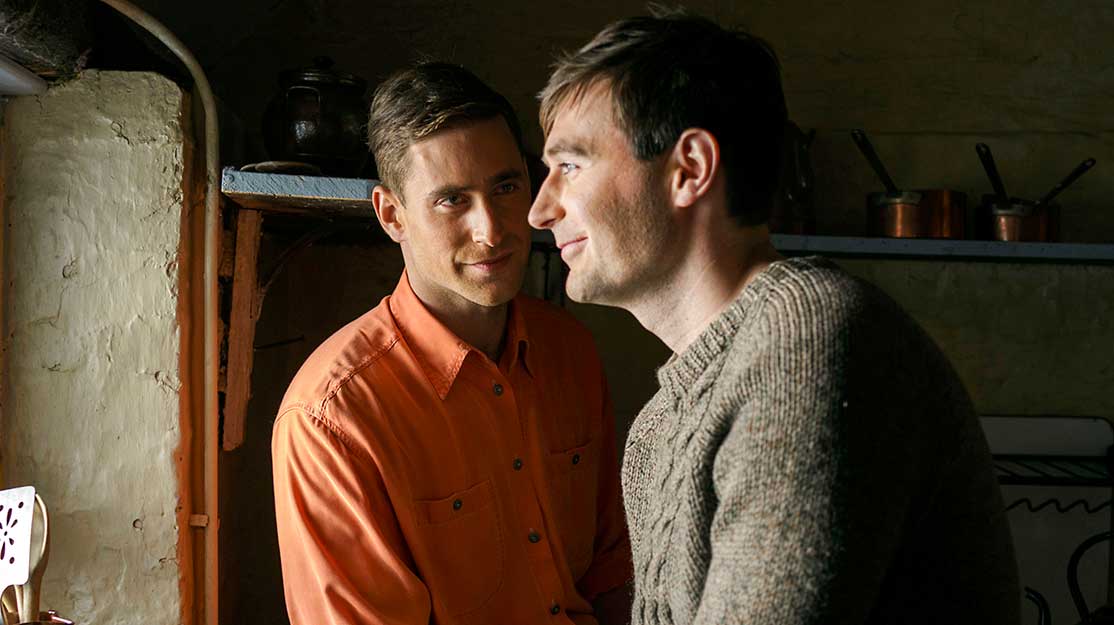 From the sidelines, it looks like a cosy scene. Stepping down from Battersea Park’s picturesque bandstand, arm in arm, in immaculate 1940s dresses, Joanna Vanderham and Laura Carmichael are deep in conversation.

While extras in period costume walk behind them (and assistant directors, also in period costume, shoo away curious dog walkers) they are seemingly oblivious as their characters swap the closest of intimacies. The pair play sisters Flora and Daphne and the scene is at the heart of an ambitious new BBC2 drama, Man in an Orange Shirt, chronicling the modern history of gay lives in one family, set 60 years apart.

Vanderham, complete with a huge prosthetic pregnant bump, plays Flora, who just hours earlier discovered something that would change her life, the life of her unborn child, and his child too, forever.

Cleaning a desk belonging to her husband Michael (Oliver Jackson-Cohen), she finds letters from his lover Thomas (James McArdle), an artist who had been her husband’s best man at their wedding. She’d burned them and hastily arranged this meeting with her sister. But as she muses the reality of her husband being a gay man, she finds that she can’t even tell her big sister this dark, dark secret. The possible consequences – divorce and even jail – are too tough to contemplate.

“The way this scene is described in the script is ‘the women meet for lunch and everything is perfect’ with lots of exclamation marks,” says Vanderham. “But of course, the opposite is true. There are all of these things going on underneath the surface but Flora swallows it down. It’s a very British thing to do. She never says anything, she never says how she feels.

“From this moment she moves forward in a way that means outwardly it looks like things are fine. But what we see is the cost and how much keeping everything bottled up costs her. At the start of the film she’s full of life and vitality; excited about her marriage and becoming pregnant. By the end she’s a tight-lipped, close-mouthed, unhappy and lonely woman.”

The two-part story of The Man in an Orange Shirt has been written by novelist Patrick Gale, whose original commission was the rather open-ended idea of doing something about the experience of gay men in the 20th century. He decided to turn the tale inward; in some ways it is his own story.

“It was the most terrifying commission I’ve ever had,” admits Gale, who is making his screen debut with the project. “The gem of this whole story comes from when I tried to come out to my mother when I was 22. I had written my first book about being gay and it was my way of coming out to her. But instead of talking about it, she revealed to me that my father had had an affair with another man when she was pregnant with me. She had found some letters and had burned them. The amazing scene that is in the first film actually happened to my mother but in real life she never confronted my father. She never told him.

“She just waited until I grew up and told me. Thanks mum! To my dying shame I never had a conversation with my father about it. He knew I was gay and was very sweet about my lovers but – being so British – we never really had a conversation about it. I wonder, I still wonder, what he thought of it all.”

The second of the films brings the action into the present day. Flora, now played by Vanessa Redgrave (who also played an older version of Vanderham in Richard III at London’s Almeida Theatre recently), is bringing up her grandson Adam (Julian Morris) after both his parents were killed in a car crash. He is gay but his grandmother’s attitude towards homosexuality means he can’t confide in her, and he’s filled with self-hatred over his own sexuality, spending his time meeting up with strangers for meaningless sex without even bothering to find out their names.

When he meets a man he genuinely likes, an architect called Steve (David Gyasi), he is frightened by his feelings and jeopardises the relationship.

“We are celebrating the 50th anniversary of the decriminalisation of homosexuality [in the UK] but I think the problem of gay shame is one that won’t go away, however much legislation you pass. We will always be a minority, we will never apply to that Disney model of gender roles.”

Appearing in the drama, which is produced by Kudos and distributed by FremantleMedia International, also made Redgrave think about her own experiences. One of Britain’s most famously liberal stars, whose husband and father were both bisexual, she took some convincing to play the part of the embittered Flora. Gale wrote her a three-page letter explaining why Flora acts as she does in an attempt to win over the veteran actor – and it clearly worked.

“I had to start with the thought that she wasn’t always brusque and difficult,” says Vanessa. “She was somebody very nice who has had to fabricate a whole denial system in her life. The impact of that has built and built throughout her life.

“It has made me think a lot about my father’s generation. He was bisexual and a lot of his friends were totally gay; there were quite a few lesbians too. To protect themselves, they protected each other. How could we have called ourselves a democracy up until 1967 when this was illegal? The cruelty! What a cruel, harsh attitude of you can do this, but you can’t do that. Total stupid rubbish!”

The Man in an Orange Shirt, which debuts on BBC2 on July 31, is one of the cornerstone dramas commissioned by the BBC to celebrate the decriminalisation of homosexuality and it shows the legacy of draconian laws that meant it was impossible to live as an openly gay person. “It’s a drama about some people who are gay and some who are not,” adds Vanderham. “Flora is the female protagonist and she suffered just as much as the men in her life. More than a gay story, it is a human story which needs to be told.”