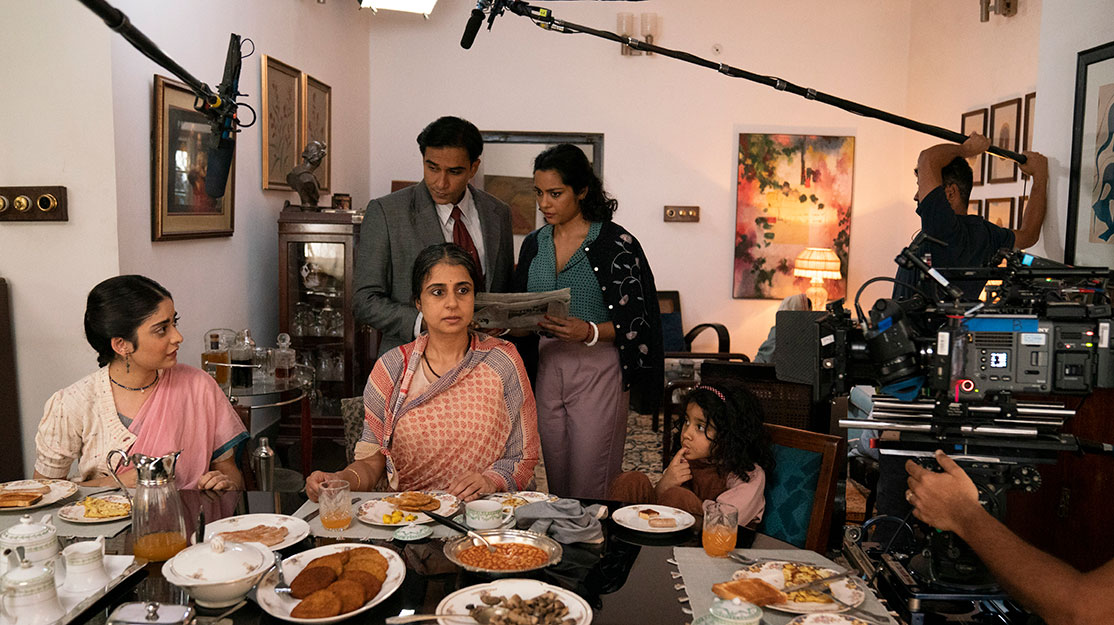 A breath of fresh Nair

In her television debut, award-winning Indian filmmaker Mira Nair has partnered with screenwriter Andrew Davies to bring Vikram Seth’s novel A Suitable Boy to the small screen. She tells DQ how she has embraced longform storytelling.

After filming on six-part BBC drama A Suitable Boy wrapped at the end of December last year, the series moved straight into post-production in early January. Director Mira Nair oversaw an editing process in London that took place 12 hours a day for two months, until she returned home to New York in mid-March as the coronavirus pandemic began to take hold around the world.

“I’ve been editing everything remotely since then and we’ve not had a day off,” she tells DQ from her home in the US as the final touches to the series are made before it is delivered to the broadcaster. “We’ve been editing, sound designing, mixing and recording orchestra in Budapest, and recording additional dialogue from almost 50 actors in India, all of whom have been shipped microphones they can use with their iPhones. It’s a whole new world. It’s been very focused and we’ve not lost a day. But it’s extraordinary. I never thought this could happen.”

The experience of working remotely amid a pandemic has certainly made the final stage of making A Suitable Boy a memorable one for Nair, not least because it is also the first time the award-winning Indian filmmaker has worked in television.

Based on Vikram Seth’s classic novel, the drama is set in vibrant 1950s India and tells the story of 19-year-old Lata (played by newcomer Tanya Maniktala), who seems to have her life mapped out in front of her thanks to old traditions and an overbearing mother who wants to find her a suitable husband. Torn between romance and responsibility, Lata is determined to find her own way in life at a time when a newly independent India is also coming of age.

Connected to Lata through their siblings’ marriage is wayward Maan (Ishaan Khatter, Beyond the Clouds), who wants every drop of excitement from life. However, when he becomes infatuated with the glamorous courtesan Saaeda Bai (Tabu, Life of Pi), the consequences could be catastrophic.

Distributed internationally by BBC Studios, the series is produced by Lookout Point  and was filmed entirely on location in India, most notably in Lucknow and Maheshwar. The settings serve as a mesmerising backdrop to the story, which Nair brought to the screen by partnering with Seth and acclaimed screenwriter Andrew Davies, who previously adapted classic novels War & Peace and Les Misérables for Lookout Point and the BBC.

“I really have embraced the longform storytelling that TV allows us to do,” says Nair, who is best known for films including Monsoon Wedding and Queen of Katwe. “A Suitable Boy should not be stuffed into a two-hour running time. It’s a 1,300-page tome with several interrelated worlds.

“Now, because so many great craftspeople from cinema have come to work in television, it can have the magnificence and the authenticity [it deserves], having been shot entirely on location: the light, the sound, but also the sweep, the depth and the layers of it. To me, that was vital and that is how I would make cinema. I was aware it was television, but it was more structural awareness rather than a cinematic craft becoming different.”

The adaptation of Seth’s book, one of the longest novels in the English language, has been the subject of fierce speculation ever since it was published in 1993. When Lookout Point finally secured the rights, the company discovered that Davies was the only screenwriter Seth would consider to write the scripts. Nair, who says she has read the novel multiple times, then jumped at the opportunity to direct the project.

“For me, it’s the great portrait of us, the subcontinent, at the time India had to find its voice as a free country [after Partition], and that was always an era I wish I was born into,” she explains. “It also inspired my own film Monsoon Wedding 20 years ago. I knew there were several attempts to make it into a series but it never got made and I wasn’t involved. But this time I heard it was real and I immediately wanted to throw my sari into the ring.

“Andrew had already written the eight scripts – a wonderful distillation of it – and then I got involved. For a series of reasons, we decided to make it six hours, and in that further distillation I got very involved, I was one of the architects of it, because I wanted it to be a very timely portrait of what is going on in India now.”

In particular, Nair points to Seth’s depiction of the divide between Hindus and Muslims in India in 1951 and her ambition to relate that story to events today. “I worked closely with Vikram to not change the story but to make sure we were being deeply responsible to the layered complexity of that world. The other big thing was Lata. While she is a young woman on the brink of knowing her life or herself, she has this beating heart that is as universal and as timeless as ever. She could have been a demure, coquettish character but that’s not my thing, nor Vikram’s. We wanted to make sure we captured that modernity and universality in a young girl who is yet to live her life.”

The director says she didn’t need to persuade anyone to shoot A Suitable Boy entirely on location, but that decision later impacted what could or couldn’t be done and shaped the script accordingly. More important to her was the casting, and her well-worn approach of pairing screen “legends” opposite “non-actors.”

“I love that amalgam and seem to keep on doing it. So a lot of A Suitable Boy was also cast in restaurants,” she jokes. “For me, the families were so vital that they had to feel like they belonged to each other. Vikram’s written such delightful characters that you really have to scour the landscape. I love casting people known and unknown but who embody the spirit of what we are looking at. That defines a lot of the energy on set.”

Nair also felt at home on set as she was surrounded by many of the crew who have worked with her for more than 25 years in India and around the world, such as cinematographer Declan Quinn, production designer Stephanie Carroll, costume designer Arjun Bhasin and producer Lydia Dean Pilcher.

“It had to be on location. I come from cinéma vérité, from things that have to feel truthful,” she says. “Sometimes we shot in rooms where Vikram had actually written A Suitable Boy. A lot of the locations are real places in the story itself, so that informs the visual style enormously. But I think cinematically and visually. It was about the sweep and movement of it, of linking the worlds of the courtesan to the nawab to the tenement.”

Nair also wanted to depict the truth behind the wealthy and privileged lives of some of the characters, showing staff such as cleaners continuously working in the background. “I love that type of reality,” she notes. “That layer of class was vital to me. Then because of this wonderful shorthand we had [between the crew], despite not having the most luxurious budget, we could achieve magnificence because we didn’t waste time on things that didn’t have to be done. There are almost no deleted scenes. It’s crazy but true, because we couldn’t afford to. When you know how a team works, you can achieve that.”

Looking back on production, the director recalls the “gruelling” filming schedule over several months and how she was forced to use a double in the same shot as the actor for whom she was meant to be standing in when the actor hurt her ankle and couldn’t move sufficiently for the scene.

“It’s about stamina. But we did yoga on set, we stayed strong,” Nair says. “And the same stamina applies now because doing post-production remotely is, on average, a 10-hour day. There’s a great high I experienced filming in India because my crew have been with me for so long. The grandson of the gaffer on Salaam Bombay [Hello Bombay, 1998], my first film, was with us so we had three generations of one family on this set. It was amazing. It was very moving.

“People work from the heart because I have a relationship with so many of them. It was tough – so much of it was on water or this and that. There were the usual struggles of film production, made more so by the fact we were going to places where films had never been shot before.”

But at all times, Lata and India remained at the heart of the production, as the story of a young woman finding her voice is paralleled by the journey of a country searching for its own identity. A Suitable Boy begins this Sunday on BBC1, while Netflix has picked it up for subscribers around the world excluding Canada, the US and China. Netflix will also carry the series in the UK 12 months after its BBC release.

“What people will love, I hope, is the humanity and the heart of the story,” the director adds. “The fact is that, no matter when it might be set, it’s us on there because we have all travelled through adolescence and made mistakes or follies to find who we are. That tale of coming of age, or coming of voice, both for a person and a nation, is not something you can simply observe but that you can feel and be involved with.

“On a political level, I would have loved to have shown more of the syncretic amalgam of the Hindu and Muslim culture, the music and the language and the coexistence and the depth of the friendship that we all grew up with but is fast being obliterated today. It’s important to hold a mirror to that time, because it’s going. But mostly it’s about growing up as a young girl and about a country growing up as well.”