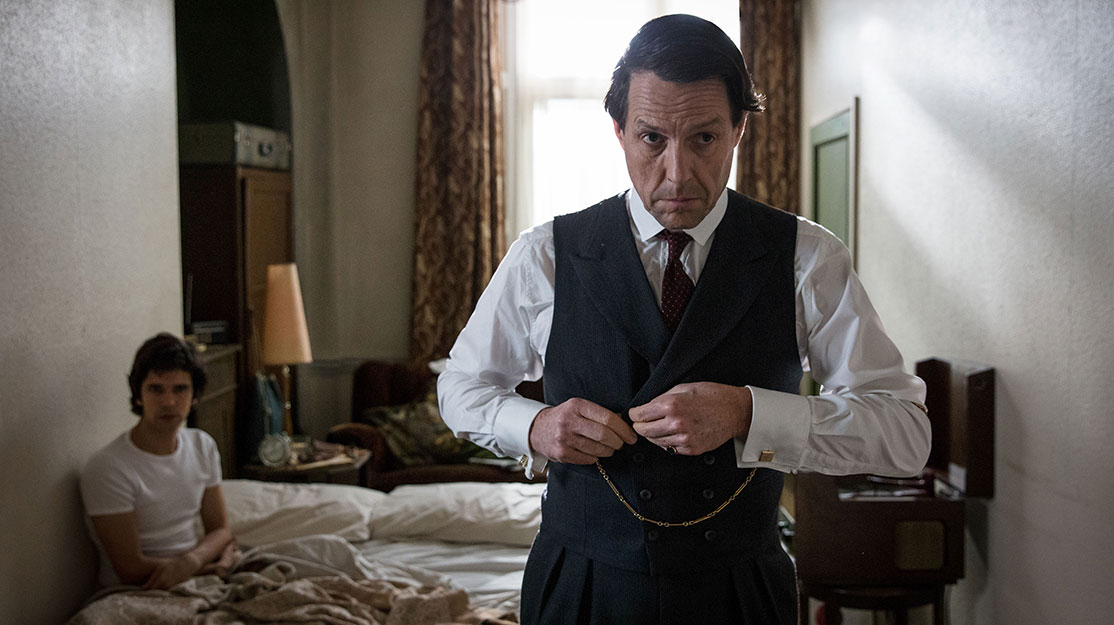 A Blueprint for Scandal

If there’s such a thing as an easy commission, A Very English Scandal might be it. Take a previously untold story based on a bestselling book and add writer Russell T Davies (Doctor Who, Cucumber), throw in director Stephen Frears (The Queen, Philomena) and add Hugh Grant (Notting Hill, Love Actually) in the lead role and it’s little wonder the BBC quickly commissioned the three-part drama.

The person who pulled the project together is Dominic Treadwell-Collins, best known as a two-time showrunner on EastEnders. Treadwell-Collins left the British soap in 2016 to set up Blueprint Television, the small-screen arm of film producer Blueprint Pictures, which was recently behind Oscar-winning movie Three Billboards Outside Ebbing, Missouri.

“It’s nice that this is the first thing for me after EastEnders,” Treadwell-Collins says, joking that he was “broken” by the time he left the show. “I just needed to get into a bit of development and pause a bit. Even then, we got this greenlit within nine months. What I set up to do with A Very English Scandal was mix someone like Russell – an amazing TV writer – with Stephen Frears, an amazing film director, because that’s the way a lot of TV is going at the moment. It feels like we’ve achieved that.”

A Very English Scandal, which is coproduced with Amazon Prime Video in the US, tells the shocking true story of the first British politician to stand trial for conspiracy and incitement to murder. In his first television role since the 1990s, Grant plays disgraced MP Jeremy Thorpe, who in 1979 was tried but acquitted of conspiring to murder his ex-lover, Norman Scott (played by Ben Whishaw).

The drama begins in the late 1960s when homosexuality had recently been decriminalised. Thorpe, leader of the Liberal party, fears his career is at risk as long as former lover Scott is around. Thorpe schemes and deceives – until he can see only one way to silence Scott for good. Thorpe’s trial changed society forever, illuminating the darkest secrets of the establishment.

Blueprint had picked up the rights to John Preston’s novel of the same name before Treadwell-Collins joined the company, so he had some reading material to hand during his three-week break between leaving EastEnders and joining the fledgling production company, which is backed by Sony Pictures Television, the distributor of the miniseries. But what he expected be a “dry political scandal” surprised him with its funny and farcical tone, its unbelievable-but-true plotlines and the human relationship at its core.

Working with a public broadcaster, in this case the BBC, meant every detail in the script had to be scrutinised and backed up by three different sources. But that hasn’t stopped the series attracting as many headlines now as the scandal did 40 years ago, with some claiming the show represents certain characters unfairly. Police have also reopened the case of the failed assassination after discovering a key suspect, previously thought to have died, is still alive.

“That’s always part and parcel of doing factual drama,” Treadwell-Collins notes of the controversy surrounding the way some real-life figures have been portrayed. “That’s always going to happen. The thing we’ve been very firm about from the beginning was it’s A Very English Scandal based on the book by John Preston. That is our primary source material and, because his book has been out there in the public domain, we haven’t deviated from that.”

But it remains the case that factual drama is riding the crest of a popularity wave on television, with recent hits including American Crime Story’s focus on the OJ Simpson trial and then the assassination of Italian fashion designer Gianni Versace, British crime drama Little Boy Blue and Netflix documentaries like Making a Murderer and Wild Wild Country.

“There’s something quite nice about having the authenticity and also truth being stranger than fiction,” Treadwell-Collins says. “They just bring you in and there’s a huge appetite for stories but particularly true stories that people don’t know about. That’s what’s exciting.”

Within a large ensemble cast that also features Alex Jennings, Patricia Hodge, Monica Dolan, Adrian Scarborough and Jason Watkins, it is Grant and Whishaw’s partnership that carries the drama through Thorpe and Scott’s relationship, from early infatuation to bitter conclusion, while the tone rises and falls between humour and farce and tender emotional moments.

That balancing act could only have been managed by one writer, says Treadwell-Collins, who immediately took the project to Davies. “He was the first person I went to, the only person I went to, because Russell has that tone of jauntiness and then can punch you in the stomach with emotion, and that’s what it needed,” he explains, adding that the writer initially turned the project down. “He’d heard of the Jeremy Thorpe story but said he was too busy. I sent him the book anyway and he emailed me two days later and I’d got him. He’d read the first few pages and thought, ‘I’ve got to do this. I don’t want anyone else to do this story.’

“Russell got that balance just right and putting him with Stephen, he’s such a human director. He’s added these private moments of Jeremy, such as when he’s looking in the mirror before he goes to face a hoard of journalists, and he really made you feel Norman and Jeremy’s story all the way through. That’s what has chimed with the audience.”

Frears, who would give notes on each script, spent lots of time with Davies talking over the central relationship between Thorpe and Scott, speaking to people whose lives were affected by the story. The production team also met relatives of the characters in an effort to present fully rounded portraits of the characters on screen.

Grant and Whishaw also did their own research and spent time rehearsing with Frears before committing their performances to camera. Grant even learned to play the violin for a scene in episode one in which Thorpe performs for Scott alongside Thorpe’s mother (Hodge) on the piano. The actor shared the view of Treadwell-Collins, Davies and Frears that his performance should not be an imitation of Thorpe, and that he should instead try to embody the real-life politician.

Filming took place around the UK, from Wales and Devon to London and the Home Counties surrounding the capital. The interiors of the Houses of Parliament were recreated at Manchester Town Hall, while a Devon beach doubled for California.

For Treadwell-Collins, making the series was a far cry from his experience on EastEnders. The long-running soap airs four times a week, has a cast of more than 40 actors and employs hundreds of crew, with Treadwell-Collins on call 24/7 in case any problems arose.

“It was insane, I loved it, but you’ve got to love a show like that to run it properly,” he recalls, adding that he is now enjoying building his own slate of dramas. These include “other scandals,” an adaptation of chatshow host Graham Norton’s novel Holding and an adaptation of Israeli drama Fauda, to which Blueprint has secured the remake rights.

The producer has also teamed up with Grantchester writer Daisy Coulam for what he describes as “a period female Bond series with a bit of Hollywood sparkle,” while he also plans to reinvent the British period drama for the 21st century.

A Very English Scandal, which is available on BBC iPlayer and launches on Amazon in the US on June 29, could be a tough act to follow, however, both in terms of its A-list creative talent and the five-star reviews it has received. But Treadwell-Collins remains undaunted.

“What’s been nice for our first Blueprint Television production is it’s Russell T Davies, Stephen Frears, Ben Whishaw and Hugh Grant,” he concludes. “We’re putting our flag in and saying this is the mark of quality we will keep to.