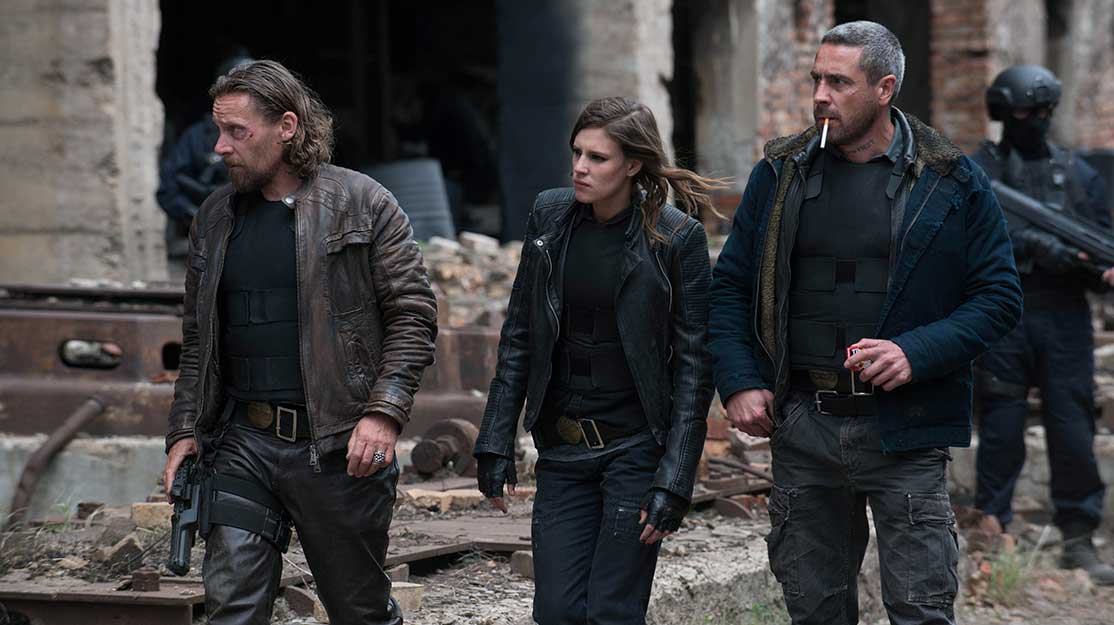 Zeroing in on a dark future

Braquo creator Olivier Marchal is back on TV with Section Zéro, a new thriller that puts a sci-fi spin on his trademark brand of gritty crime drama. Michael Pickard finds out more from the show’s producer Edouard de Vésinne.

But in France, he’s currently enhancing his reputation with his latest series Section Zéro, which takes his penchant for police-focused stories into the realm of sci-fi thriller.

Described as a dark, edgy and violent political drama, Section Zéro is set in a near future when multinational corporations are Europe’s new leaders. One of the most powerful, Prométhée, wants to further secure its growing dominance by replacing the police force with a private militia, the Black Squad, led by Henry Munro (Pascal Greggory).

But following the shooting of his daughter, idealistic law enforcement officer Sirius Becker (Ola Rapace) – with his life in shambles, his darkest secrets exposed and with nowhere to turn – aligns himself with old cop Franck Varnove (Tchéky Karyo).

Sirius takes charge of Franck’s elite squad, known as Section Zéro, to battle the militias and bring about a return to traditional law enforcement.

Yet despite the genre trappings, producer Edouard de Vésinne says the Canal+ drama – which debuted on April 4 – is first and foremost an Olivier Marchal series. The auteur directed every episode and wrote the scripts alongside Laurent Guillaume.

“Olivier has a very important and specific place in the map of French talent and television,” de Vésinne explains. “He’s an ex-cop; he was a cop for about 10 years. Then he became an actor and, from there, he became a writer/director. Today, he is the master of cop movies and series in France. He only does police shows – and Braquo has been a worldwide hit.

“All this stems from his tough look on the world, which is very dark, violent, sexy and nervous, but with a soft heart for the characters and the actors. He’s an actor’s director and he has a childlike sensitivity that goes straight to the heart of the French public. They know he’s sincere.”

Braquo, which also airs on Canal+ and has run for four seasons, follows four Parisian detectives who blur the lines of the law to get the job done.

“After Braquo, Olivier wanted to try a new series,” de Vésinne says. “This is his first work that isn’t specifically a police show – but there are still cops! Governments are bankrupt and corrupt and being taken over by corporations. The elite are hiding behind closed walls and, in the middle of this pandemonium, there is a group of ex-cops trying to create some resistance. That’s where we find the values Olivier is always looking for: group spirit, fraternity and a kind of political view that resonates with the audience.”

Produced by EuropaCorp Television, Bad Company and Umedia, Section Zéro was already in development at Canal+ when de Vésinne and his production partner Thomas Anargyros came on board. In fact, Marchal had already written the first three scripts when he approached the pair about bringing the series to life.

“He came to me, we didn’t go to him,” de Vésinne says. “We would never have gone to him with the expectation of a genre show. I’m not even sure how I would have reacted if he had come to me with the pitch. But he came to me with a full script and it was so full of emotion and incredible characters that, of course, we said yes. It was very ambitious. We didn’t know how the hell we were going to finance it but the credit really goes to Canal+, which has followed and developed Olivier’s ideas from the beginning on this series.”

Canal+’s commitment to this urban western is the latest evidence of French broadcasters’ new openness to creative ideas that may not have found traction several years ago. The pay TV giant has previous form with zombie drama Les Revenants, but is now being followed into genre series by its free-to-air rivals. Subsequently, these shows are now finding new audiences outside France, as evidenced by Les Revenants’ worldwide success.

“When people say French broadcasters are shy and don’t want to take risks, I say take a look at Section Zéro,” de Vésinne says. “But it’s not only Canal+. Even TF1 is doing genre. If you look at Le secret d’Élise (based on the UK series Marchlands, a ghost story set across three time periods), that has a supernatural twist you would never have seen in the last few years on TF1. France 2 is also taking risks with a show like Dix pour cent (about the agents of four actors hunting for the best roles for their clients). In the last couple of years a small revolution has been happening in French drama.”

Marchal also sought to add international appeal to his latest drama – though it was never likely to be filmed in English.

De Vésinnes notes: “Olivier wanted a series that didn’t look French at all – but he wanted it to be in French because that’s how we can carry the emotion and the subtleties of his dialogue. It also means he can talk to the actors, which is very important to him. But apart from the language, he wanted nothing to be French. That’s why we also have an international cast and why we shot outside France (in Sofia, Bulgaria).”

He adds that the production – which was completed in 90 days – faced both creative and financial challenges: “It’s not what we usually do in France but we trusted Olivier with the creative aspects. And on the production side, though it is set in the future, there’s a regression factor. This future is more about desolation than spaceships and expensive gadgets. So that made it more possible to do.

“Olivier shoots television like cinema, with the same DOP, the same level of creative demand. He doesn’t do compromises; he’s not that kind of director. You don’t coach him, you accompany him.”

De Vésinnes pays tribute to Canal+, which he says has been incredibly supportive of the eight-part project – “creatively, personally, financially” – and is already developing a second season with Marchal. StudioCanal was also heavily involved as the international distributor.

But it’s the visionary writer-director who he singles out for the most praise, adding that audience support for Section Zéro will encourage Marchal to take more creative risks in the future. Just don’t expect him to create a series without police officers at its heart.

“Olivier will always have a special thing for cops,” he adds. “There has to be cops – that’s what he is and he always goes back to that. So far the audience has always followed him in spite of or thanks to his boldness, and we’ll see if the audience stays with him on this series.

“That will give him more confidence for the future to go in new directions. Maybe he will think about something else. He’s such an inspired man and a creative character that God knows where it could lead us next time.”