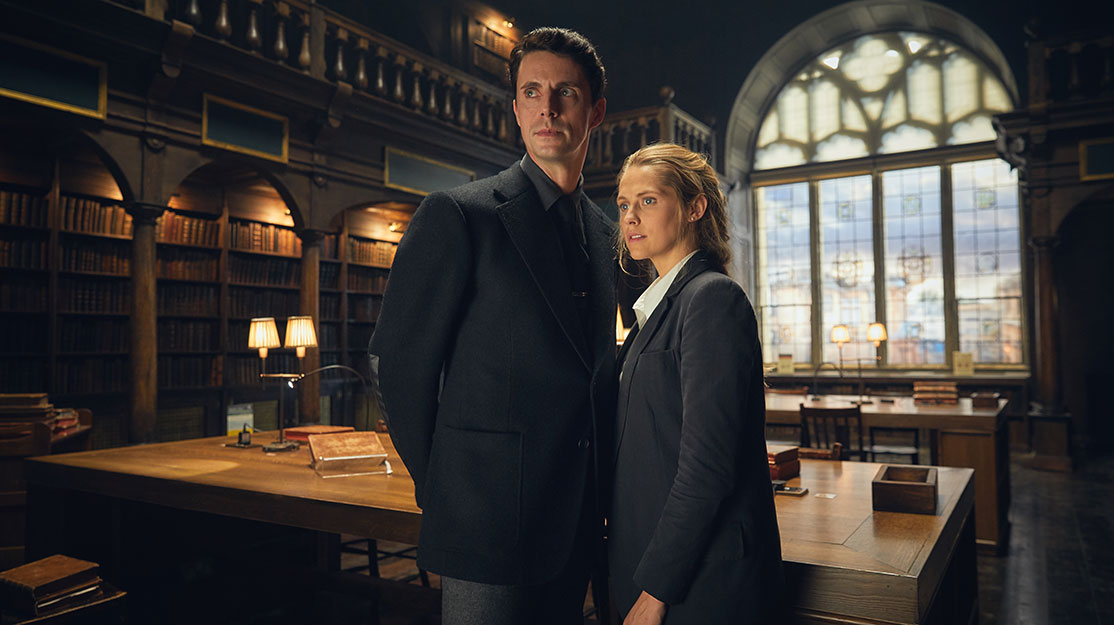 Lisa Holdsworth, chair of the Writers’ Guild of Great Britain, tells DQ about the union’s plans to support writers amid the coronavirus pandemic, while also questioning how future series might represent current events.

In normal circumstances, Lisa Holdsworth would be in Cardiff, where preproduction on the third season of Sky fantasy drama A Discovery of Witches (pictured above) was scheduled to have started. But these are not ordinary times.

The coronavirus pandemic that has swept around the world has brought almost all aspects of daily life to a standstill and affected workers in every industry. The television business has been no exception, with productions brought to a sudden halt, crews disbanded and projects put on hold – at a time when people ordered to stay indoors are likely to be turning to television more than ever, to keep them informed of the latest developments and to find relief and entertainment in the dramas and comedies to be found on numerous linear channels, catch-up services and streaming platforms.

“I should be in Cardiff working on it but we’re now in our various homes working from there,” writer Holdsworth (Call the Midwife, Midsomer Murders) tells DQ from her home in Leeds. “It’s still a bit uncertain what happens if we can’t go into production in September.

“I have elderly parents who I’m keeping an eye on, so I’m self-isolating more than usual because I need to keep healthy to make sure they’re OK. They’re going to be OK, it’s just keeping them sane. They’re both very gregarious so it’s very frustrating. The worst thing is seeing my colleagues and the devastation and unease at the moment [in the industry], so I’m doing a lot of work with the guild.

“Our amazing staff are all at home working from their kitchen tables, trying to encourage the government to think seriously about how they’ll support freelancers. It feels like the message might finally be getting through, but I’m not going to hold my breath.”

Holdsworth is referring to the Writers’ Guild of Great Britain (WGGB) and her role as chair of the trade union, which represents professional writers in TV, film, theatre, radio, books, comedy, poetry, animation and video games. Established in 1959, it seeks to secure better pay and working condition for its members, working with leading industry bodies and broadcasters, while also celebrating their work at an annual awards ceremony.

Uniquely, in circumstances such as these, writers are largely able to carry on, whether they are writing scripts, participating in virtual writers rooms or developing new material. But Holdsworth says the atmosphere among members is “very fearful” following the shutdown of almost all television production, including long-running British soaps such as EastEnders, Coronation Street and Emmerdale.

“And quite rightly,” she adds. “You can’t have a production where people socially isolate or use social distancing. There’s a feeling if the tide doesn’t turn in 12 weeks as [British prime minister] Boris Johnson promised, what happens then?

“There are so many unknowns; nothing is settled. As an industry, we’re pretty used to short-term contracts and a bit of uncertainty, but there’s a lot more uncertainty than we’re used to.”

The guild’s first response to the crisis was to put a page on its website listing a host of possible resources for its members. A welfare fund is also available for those who have been members for more than two years and find themselves in financial difficulty.

“We have also put up resources for protecting your mental health. That is going to be a very serious matter we have to address over the coming months,” Holdsworth says. “A lot of people will struggle as we isolate. We’re very social animals. There’s a section on campaigning and how to write to your MP asking them to protect freelancers. There’s stuff about how to get involved in your local community if you do have time on your hands and want to get involved in helping other people. We’re updating that daily.”

The WGGB is also in talks with broadcasters, independent production trade body Pact and various theatre agencies about how best to support writers who have suddenly found themselves out of work, with the possibility that life may not return to normal for several months.

“But mainly making sure that, hopefully, when things do get back to normal, we are able to support our members,” she says. “There’s a bit of a lag at the moment in terms of individual casework. We are bolstering ourselves ready for a bit of an onslaught when things become a bit clearer, but we will be there. We take on contract vetting, and at the end of the phone we have regional representatives and craft representatives [for different groups of writers] across the industry, so we are ready when people need us.”

Support that could be necessary in the future includes legal assistance if programmes caught up in the production shutdown end up permanently shelved, or if people are not rehired when business does resume. The WGGB is also preparing to campaign for greater government assistance for the arts to make sure theatres don’t close and that training schemes and opportunities don’t dry up either.

Holdsworth is particularly concerned that the fallout from the pandemic will have a severe effect on diversity and access to the industry for people of underprivileged or underrepresented backgrounds and communities. “We have to make sure that’s not the case, because we were doing good work,” she says. “We were getting progress on that, and my fear is this will mean it evaporates.”

Front of mind for Holdsworth and the WGGB is also supporting freelance workers, whose work may have dried up amid concerns about paying rent and looking after their children. As many as 600,000 staff on temporary or zero-hour contracts have been affected  across Europe, according to the European Producers Club, while the British Film Institute and the Film & TV Charity have partnered to create an emergency relief fund for workers in the UK.

The British government is now looking at ways to support this branch of workers as well as the self-employed, with further announcements promised by chancellor Rishi Sunak.

This is an area the union has addressed “over and over again,” Holdsworth says. “What may be interesting is if there is more government support for freelancers and a better understanding of how many people, across the country, are working in the gig economy and on a freelance basis. Then we can hopefully get some improvement for freelance workers. I feel like we are going to get a response but, good grief, they’re dragging their feet over it and it’s enormously frustrating. I wish they could understand the stress and worry it’s causing freelance workers.”

As conversations with broadcasters including the BBC, ITV, Channel 4, Channel 5, Sky and Netflix continue, Holdsworth says union staff will be talking to people to find out how they have been affected and ensuring their advice to members is constantly updated.

“But this is an extraordinary time to be the chair of the writers’ guild,” she says. “Thank goodness for our incredible staff, who are doing an enormous amount of fact-finding. We will formulate hopefully some more practical things to do when the shape of what we’re walking into becomes clearer.”

Holdsworth predicts facilities and crew shortages when production does gear up again, with workers such as grips, camera operators and designers suddenly finding themselves in huge demand. Writers may also face a bottleneck, with restarted productions taking priority over new commissions. Line of Duty season six and the second season of Gentleman Jack are just two British series that have been forced into hiatus, as well as the soaps, which usually dominate evening schedules with multiple episodes each week.

“We’ve got to make sure people appreciate how long this might take,” she continues. “It’s not going to be a click of the fingers and things go back to normal overnight. There’s going to be a massive period of adjustment.”

Meanwhile, there remains the creative question of how writers will respond to the coronavirus pandemic in their work, and whether viewers can expect to see a rise in the number of dystopian dramas being pitched in the future.

“Any writer worth their salt is thinking, ‘How would I dramatise this?’ We might have had enough of dystopian [dramas] – it all feels a bit Walking Dead anyway,” Holdsworth adds. “It will be interesting to see where the public taste goes. There will always be a section [of the audience] that wants to see the darkest side of this timeline. But I do wonder if there’s a chance for us to examine ourselves a little bit and maybe reflect it in comedy and some lighter drama, about two people trapped in a flat together, self-isolating.

“It is already very strange watching television programmes where people are blithely walking into the pub, shaking hands, snogging and all that kind of thing. It’s really weird. It’s like watching something set in summer at Christmas. It all feels a bit odd and oddly nostalgic, but I’m sure we’ll get back to normal at some point.”