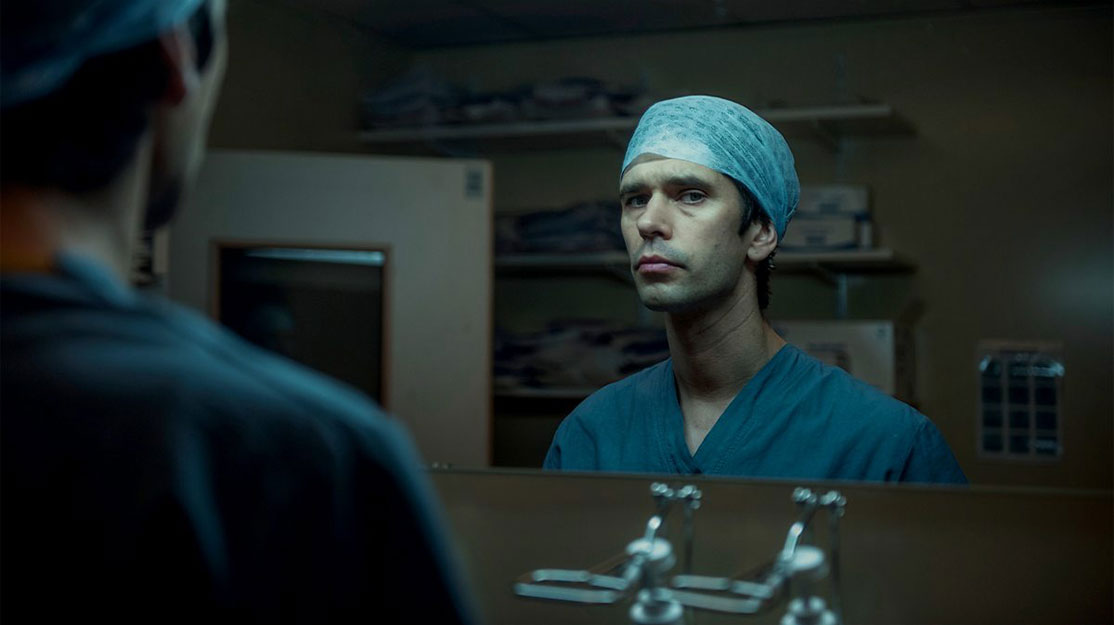 Former doctor Adam Kay speaks to DQ about turning his bestselling memoir This is Going to Hurt into a BBC drama and the show’s real-world impact within the medical community.

Following the success of his memoir This is Going to Hurt, doctor-turned-writer Adam Kay adapted the book into a BBC One drama of the same name.

Debuting in the UK in February this year and launching in the US on AMC+ and Sundance Now in June, it tells the story of Adam (Ben Whishaw), a junior doctor dealing with crippling hours and a constant barrage of terrifying responsibilities. Meanwhile, he is clinging to his personal life as he is increasingly overwhelmed by stresses at work: the 97-hour weeks, the life-and-death decisions, and all the while knowing the hospital parking meter is earning more than him.

This is Going to Hurt also stars Ambika Mod as Shruti, a young junior doctor just starting in obstetrics and gynaecology. Naturally bright, diligent and caring, she has everything it takes to be a great doctor, but the job still finds ways to throw her into chaos and doubt.

Created, written and executive produced by Kay, the show is produced by Sister and distributed by BBC Studios. Lucy Forbes and Tom Kingsley direct.

Kay says he has been “blown away” by the reaction to the series at home and abroad, adding: “When the book came out, I was surprised how many countries were interested in it because I thought I’d just written a slightly parochial study about the NHS. On AMC [in the US], it’s had the most phenomenal reaction. There is clearly something that is universal about the experience of being a doctor and trying to be functional human being at that same time.”

Here, speaking to DQ at French television festival Serie Series, Kay discusses putting the drama together, working with the cast and whether it has a future beyond its first season.

What were the biggest lessons you learned from writing the series?
I learnt so much because it’s the first time I’ve written anything approaching drama. I learnt a lot from producers, execs and directors, and I wish I had the level of knowledge that I’ve sponged from them going into it again.

The weird thing with making telly is there’s such a long time between actually writing it and then it seeing the light of day. It’s weird seeing stuff you wrote a couple of years ago and I’m always thinking, ‘Oh, I’d have done that differently.’ But with this project I’m just very proud of what everyone achieved. I’m one cog in a pretty huge machine, not least the directors and the HODs and the cast.

How did you decide what kind of story to tell?
It could have gone in lots of different directions. I’m glad we leant into the things that make it different [from other medical dramas] – the fact it does comedy as well as drama, and the fact it explores a lot of the home life, and the character of Adam isn’t a hero in the conventional sense. We could have made him this amazing superhero; instead, I made him very complicated, often very badly behaved, a bit of an arsehole, to show the complicated truth of working under pressure, what that does to you and how you end up reacting in extremis.

I think, and believe from the reaction I’ve had from various people who work in the health service, it’s a fair depiction of what it’s like to work in that environment. We shouldn’t shy away from showing that stuff. I’ve had messages from doctors, nurses, midwives and paramedics saying, ‘Thanks for showing what we do at work. I can tell my friends and my relatives and my partner to watch that.’

What was it like for you to leave medicine and move into comedy and writing?
I left after a terrible experience at work and I realised that I couldn’t go on. There was no bravery in leaving, there was no plan. The big decision [was working out] what I would do, and having never done any other job in my life but having always had a creative streak, I thought I’d give it a go. I thought I’d probably end up back working in another branch of medicine not long afterwards. But I got lucky and I’ve been in continuous work, either through writing comedy or performing, or now writing drama and writing books. But there was definitely no plan.

Adam isn’t a typical protagonist. How did you create your leading character?
I just wanted to show the huge pressures these people are under. I don’t believe that anyone is the best version of themselves when they’re working that second 12-hour shift, when they’re being shat on from above. There’s that side of things, and also a huge amount of what I wanted to achieve was about the mental wellbeing of healthcare professionals, which is something people don’t really talk about enough.

I wanted to really lean into that, and you can’t show that through people having a lovely time and thriving. I showed two people struggling in very different ways – one [Adam] who is struggling in the way their work impacts their home life, and Shruti. I certainly had lots of letters, emails and DMs from people who really resonated with Shruti or knew doctors who had taken their lives or come close to that. That’s what I wanted to do, and that far outweighed any concern I might have about having a dislikeable [lead] character.

The magic trick Ben Whishaw does is he brings such innate warmth to the character that you have mixed feelings about his behaviour and you understand why he’s doing it. You can see that ultimately he’s a good person working hard in an impossible situation with unthinkable pressure. He makes any number of bad decisions and he’s an HR nightmare, but through Ben’s portrayal, you can believe it. He isn’t a conventional hero but nor is he a villain.

How did you write the series?
I’m not sure I believe writers who say ‘it was all me,’ because it can’t be. It’s all the people who are in the credits at the end, and it’s hugely collaborative, not just with the directors, the producer, the execs and the channels – it was the cast [too]. How do I know the experience of a young Asian woman going into medicine? I don’t, that would be ridiculous, so that’s why it’s brilliant to talk to Ambika and talk through how the script needs to move so she feels that it would be an authentic portrayal. All the actors have to believe in what they’re doing and, right to the last minute, Lucy or Tom, the directors, would say, ‘Can we have another version of this line or that line?’ It has to keep moving.

How did you work with the cast?
I was in touch with every single one of them at some point and some more than others. But if they don’t believe it, the audience doesn’t believe it. They know their character better than anyone else and we had some really interesting discussions. They asked questions I just hadn’t thought of, maybe because I’m just not experienced enough. I didn’t think of all these things about the rest of this character’s life, their background, their upbringing and their previous jobs.

When you’ve got an expert, someone who’s literally devoting a long period of time to that character, why wouldn’t you draw on their journey, their experiences and their expertise? I learnt a huge amount. I’m hopefully a better writer for it.

Are you a fan of medical dramas?
I’ve watched all sorts of things, from Green Wing, which is amazing, to Grey’s Anatomy, which is amazing for other reasons. I’ve not invented the genre but the thing I wanted to do that other shows hadn’t was dig into the 360-degree experience of being a doctor and what it’s like when you get home. In general, medical dramas are really accurate in terms of the medicine. Watching these operations, it might as well be an actual surgery. But it’s when they take the scrubs off at the end of the day and they get on the bus, sometimes that’s something I just wish I’d seen before. It was brilliant to have the opportunity to show that.

Will there be a second season?
I wrote it as a ‘one and done.’ I had a story I wanted to tell with a beginning, a middle and an end, and I told that. And in terms of critical reaction, viewing figures and, most importantly, what I’ve heard from NHS staff in terms of starting conversations about suicide and doctors, it’s achieved beyond my wildest dreams.

The next thing I do will be pretty different. I realised I had other stuff I wanted to talk about in a broader sense that I couldn’t achieve through this show, and that kernel of an idea led to this next thing. The biggest thing this year has been books. I’ve been writing kids’ books a lot recently and I have my next grown-up book out [this month] called Undoctored. It’s two things: looking back at medical school, which is something I’ve never talked about before, and also what happened since This is Going to Hurt. It’s both a prequel and a sequel [to the book], looking at how training to be a doctor fucked me up.

What needs to be done to improve the wellbeing of doctors?
It’s a lack of resources. We’re short of so many doctors, nurses, midwives and everyone, and it needs investments and resources. There are lots of little fixes, but I don’t think any of them will really work until you do the big fix.

How far-reaching has the show been?
Shortly after it first aired, I spoke at a conference called The Wounded Healer, which is about the mental wellbeing of healthcare professionals, particularly talking about suicide and doctors. It was amazing speaking to these people who deal with this. They said a few years ago it was an absolute taboo; no one talked about doctors taking their own lives, even though a doctor does that once every three weeks.

Then this show went out to millions of people and it became an unavoidable talking point. No hospital boardroom can avoid that topic, and it’s made it easier in getting those conversations started about what each individual hospital trust is doing to stop this and to support their doctors and nurses and everyone else. As wonderful as it is to hear viewing figures, thinking we could actually achieve some kind of real-world tangible benefit, that it might actually result in helping the people on the ground, that’s the biggest achievement we could possibly have.

tagged in: Adam Kay, BBC, BBC Studios, Sister, This is Going to Hurt