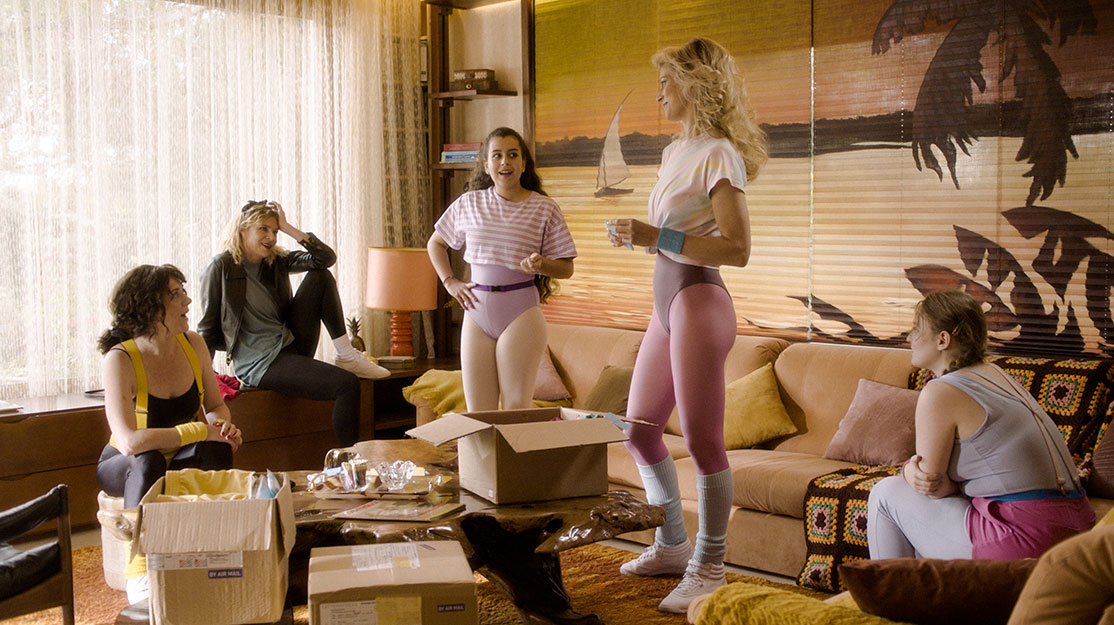 Set in the early 1980s in Toulouse, the birthplace of French aeronautics, comedy-drama Toutouyoutou (The Aerobics Project) introduces Karine, a housewife in her 40s whose life is transformed by the arrival of a new neighbour.

Jane, freshly arrived from the US, brings a touch of modernity to Karine’s small residential suburb and introduces her to the world of aerobics. But why is Jane particularly interested in Project 37, a top-secret endeavour run by Karine’s husband Didier?

The world premiere of Toutouyoutou – which takes its name from the opening titles of a 1980s French TV series – was held at French television festival Series Mania earlier this year and will debut on OCS on September 8.

Here, de Margerie, Donzel and Patry tell DQ more about the show, which is distributed by France TV Distribution.

What are the origins of the project?
Donzel: Our producer David Coujard, Géraldine and I originally wanted to talk about the early 80s when American yuppie culture arrived in France. I remember in my childhood something awkward about the obsession French culture had with what seemed like the epitome of modernity, while France was still very much stuck in the 70s.
Something didn’t quite fit; it was awkward. That era is a transition period, so there are many dramatic and comedic situations to draw from it. We thought aerobics was a perfect way to approach that, but we thought it would be more fun to confront that subject with a genre you don’t expect: the spy thriller.

De Margerie: It was funny to imagine, through Jane’s character, the arrival of this particular American culture in a small city in the south of France like Blagnac. The contrast between Jane and the Blagnac people, the French’s fascination with and jealousy of 80s American coolness, and sometimes fakeness, was also a source of comedy for us to explore.

How did you decide to work together?
De Margerie: Maxime and I have been writing together for 10 years and have been friends for longer. We have mostly written pop culture and fashion commentary together, and we had a lot of fun writing a short video series for Arte called Tutotal, which reviewed movie trailers in an absurd way. It had a fictional element to it, since we had to create a new character for each episode, in three minutes. So after 150 episodes of that, I think we felt ready to work on something longer form.

Donzel: David Coujard is also a friend of ours. He produced my second documentary and he decided to help us make this happen, since he’s been obsessed with TV shows for a long time and had been yearning to produce one. Julien immediately understood what we were trying to achieve, so working with him was a no-brainer.

What themes did you want to discuss?
Donzel: We wanted to talk about the double-edged sword of fitness: it’s about self-care and health, but can also end up being quite toxic. It’s something Jane Fonda explains in her autobiography, which of course was great source material.
Also, the idea was to focus on women who came just before the pioneers, those for whom the glass ceiling remained tightly shut. They are heroic nonetheless, and there is an interesting dramatic element to their stories – a mix of beautiful anger and resilience, as shown by the amazing documentary No Gravity by Yuri Casalino.

De Margerie: We also wanted to speak about the complexity of ageing in the 80s, when women in their 40s like Jane or Karine were considered ‘expired,’ which fortunately has evolved – somewhat. We were also interested in themes such as mother-daughter relationships, secrets shared between couples and the frustration middle-aged people can have over not fulfilling their dreams.

Donzel: We were also hoping to understand the French passion for Poulbots, the horrible paintings of wide-eyed children that seemed to adorn all of France’s toilets 40 years ago. We have not yet found the answer to that riddle.

Tell us about the characters and how we follow them through the story.
Donzel: We follow the journey of Karine, a woman who gave up on her dream of working in plane engineering 20 years earlier because the school of her dreams wasn’t open to women. Now a 40-year-old housewife with grown-up kids, she finds herself frustrated as she sees the world is changing. The practice of aerobics will help her realise the power she is yet to harness, experiencing self-empowerment through body confidence and the philosophy of aerobics.
Jane is an American who comes to the small town of Blagnac and offers an aerobics class. Even though she sells the picture-perfect American dream, there is a sadness and loneliness about her that is tied to a life of secrets and resentment.

De Margerie: We also have Mapi, a divorced, loudmouth cynic who has a secret affair with a married man, Naïma, a second-generation immigrant whose parents dreamed of integration. Then there’s Violette, a teenager who is looking at sport as a way to overpower her bullies but finds an anger within that she doesn’t know how to control. We have some male characters too – Didier is Karine’s husband, an airplane engineer who clumsily hides his immense insecurities in disastrous attempts at being funny.

How did you develop the series with OCS?
Donzel: We originally pitched a completely different project to them as part of a contest. We were finalists but didn’t make the cut, to our great sorrow. However, OCS said they’d be interested in reading something else from us. We thought they were being polite, but with David Coujard we pitched the idea of Toutouyoutou to them and they were immediately on board.

De Margerie: The funny thing is, the project we pitched originally was picked up by a different broadcaster and we’re in post-production right now. The life of TV writers is full of plot twists.

What was the writing process on the series?
Donzel: We started with research – on the history of aerobics, and the rise of fitness in general in the 80s, as well as the history of aviation and the history of industrial intelligence and spies. Even though we wanted a show that is free to be fun and not a perfect recreation of an era, we also felt it should be grounded in real stories. For the most part, it is, including the story of the fake vaccine.

De Margerie: After our first draft, we had a problem: we wanted to do too much, too fast. We brought in Benjamin Adam, an amazing writer, who co-wrote L’Opéra for OCS. He worked with us on a very efficient draft that pushes the story forward without exhausting the possibilities. We have a lot more to show in season two.

How did you recreate the look and style of the 1980s?
Patry: My aim was to accurately recreate the 1982 French provincial feel. It’s not at all the cliché of the flashy, glam 80s. In our series, Jane brings aerobics to the boring lives of our housewives and brings colours with her. Our costume designer, Cristine Gueguan, spent weeks working on references for our French characters and our Jane Fonda-inspired American icon. Most of the clothes are 80s rentals, but the aerobics costumes had to be custom made with a vintage feel.
For the art direction, we worked on scouting locations with an existing 80s feel, propped and dressed by our art director, Denis Hager. On each frame, I kept asking our prop master to hide everything that looked anachronistic, especially switches and sockets, which are a real indicator of a period. But what really makes the 80s style is the hair and make-up. This is the area where you can get a bit more cheesy because, well, that’s what it was. Our hair and make-up crew worked with loads of wigs and extensions and had a great fun. And on camera, nothing feels too much.
To complete the look, I wanted to make an 80s cartoon for the titles, as that era was very creative from that point of view on French TV. [Illustrator] Nevil Bernard has that 80s-inspired style that really made the credits rock. And, of course, the music from the composers Antoine Wilson, Clément Doumic and Sébastien Wolf from Feu! Chatterton is deeply inspired by the era.

Where did you film the drama and how are locations used?
Patry: We shot in the location where the story takes place, in Toulouse, Blagnac and the surrounding areas. It was great being there; the local team were really involved in this story that uses their aeronautical history as its background. We mostly had interiors in our storyline, but the B-team often broke from set to get establishing shots of the area.
We had roughly one location per week of the shoot, and we tried to make the most of this to give our series a feel of luxuriance. Sometimes it’s just about using a tiny bit of wall that feels 80s-ish but tells a whole story.
Whenever we filmed somewhere, we wondered if we could shoot storylines from other characters in the same location, to avoid moving around too much and to put the money on screen. So we did a country house and an urban flat in the same location, just using sound design and separate establishing shots to give them different moods.

What was your experience on set?
Patry: Amazing! It has to do with several things: the gender parity we established as a standard, with women in key positions in the crew – DOP, gaffer, first AD, camera crew – and the fact we did a huge prep with the DOP and the first AD to avoid wasting time and energy on set and avoid exhausting the crew. The crew were talented and the cast were great. The lines were funny and so was the general mood. The harmony we built is the most efficient way to make a tightly scheduled yet ambitious project work.

What were some of the challenges you faced in development or production?
Patry: During the prep, we figured out it was impossible to film the entire script within our schedule so we had to kill some sequences. We made the cuts with Maxime, Géraldine and David, so it doesn’t show in the series.
Then we wanted to make the most of a tight budget. The deal was to shoot each episode in three days, across several locations. But there is no time. Once the camera is locked, it is too late for second thoughts. We had to plan everything to still be able to create interesting frames and blockings. We shot rough drafts of most of the sequences on our phones during the recce. The whole series can be edited with the first AD and myself poorly playing all the characters gobbledygook style.
Last but not least, the aerobics scenes were also challenging. The cast were all complete aerobics beginners, including Alexia Barlier, who plays Jane. Speaking of which, Alexia  is not really American. She and all the actors did an amazing job.

Why do you think the series might appeal to international audiences?
Donzel: The aggressive dominance of American culture is something most countries relate to. The strange mix of American themes with local culture and the clash it creates is something everyone outside the US can understand. We think our story will resonate with people wherever they are.

De Margerie: I believe the series has a universal reach, as it talks about people freeing themselves from their status quo. The series might have few French cultural references that foreign people might not get – or even French folk born after 2000 – but that give the show its unique touch. In the end, I am really proud, as the show is like nothing I have ever seen before.