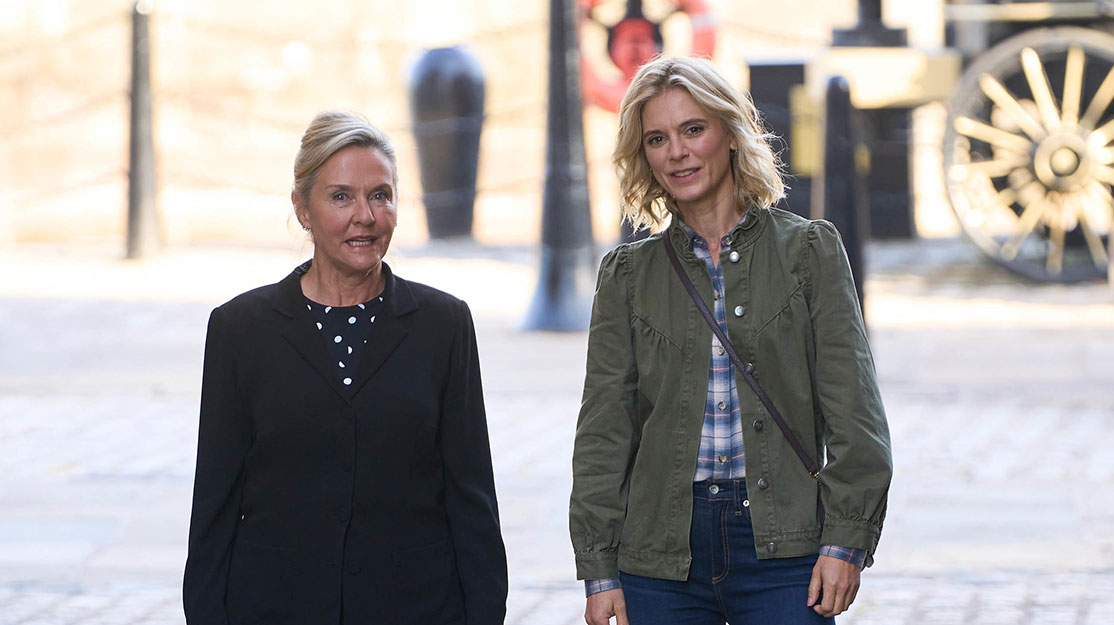 From crime scene to forensics lab, Silent Witness has enthralled viewers since it first began in 1996.

The show originally starred Amanda Burton as pathologist Sam Ryan, focusing on a team of forensic pathologists and scientists at The Lyell Centre in London who are called upon to investigate crimes and help to catch those responsible. Burton starred in 54 episodes before leaving in season eight in 2004, when Emilia Fox took the lead as forensic pathologist Nikki Alexander.

Now, as part of Silent Witness’s landmark 25th season, Burton returns to the series to line up alongside Fox for the first time in a new story that uniquely diverts from the regular two-parters with which viewers will be familiar. Instead, one story will be told across the six-episode run, which begins in the UK on BBC One tonight.

The new episodes further Silent Witness’s standing as the longest-running crime drama in the world, with 210 episodes produced so far across 24 seasons. Season 26 is already in production, while BBC Studios – which produces and distributes the show – has sold the series to broadcasters in more than 200 territories worldwide.

“I feel so lucky and proud to be part of a show that has been going for 25 seasons, and what better way to celebrate it than with the return of the iconic Sam Ryan, who we are all eternally grateful to, as well as Nigel McCrery, who created the series,” Fox tells DQ. “We were all just so happy that Amanda wanted to come back to the series and to celebrate it and to share the screen with her.”

“It would be no surprise to tell you that the last couple of years have been really tough for reasons that none of us would have predicted – and probably the most challenging in the 25 years,” says executive producer Lawrence Till on making the show during the pandemic. “But to hit a landmark like this and enter it so positively is really fantastic. The fact Amanda agreed to come back makes it very much a landmark season and is something very distinctive for the show.”

Till and producer Nick Lambon had to pitch the serialised story to Burton over several Zoom meetings before she agreed to return alongside regulars Fox, David Caves (who plays Jack Hodgson) and Genesis Lynea (as Simone Tyler).

“We weren’t sure really whether she’d do it and also how much she might want to be involved,” Lambon recalls. “She might have said no, so we had to develop a story that would work whether she was in it or not. She really embraced it from the start and she was really keen to be in it as much as possible, which is a gift.”

Season 25 opens in Liverpool with an assassination attempt and Sam Ryan calling on the team for help 17 years after she left the Lyell. The shooting of the health secretary then pulls the Lyell into a world of duplicity, intrigue and betrayal, before Nikki starts to suspect that Sam knows more than she’s letting on.

When the credibility of DNA – the bedrock of forensic science – is challenged, everything the Lyell holds dear comes under threat. Uncertain of who to trust, the team’s investigation draws them into perilous confrontations as they fight to uncover the truth and protect everything they love.

Developing the story proved to be more challenging than previous seasons owing to its new serialised format, as the team had to find new ways to withhold information from the audience to ensure they come back for subsequent episodes.

“In a usual year, creating 10 episodes – five stories – that’s still hard,” says Till, who has worked on seasons 23, 24 and 25. “The particular challenges of this were maintaining the audience’s interest in the character elements as well as the science.”

“And how do you make sure it still feels like Silent Witness?” adds Lambon, who has produced seasons 24 and 25. “One of the features of Silent Witness is that two-part structure where you tell very different stories, so how do you keep the sense that your audience is getting something new but you’re telling a bigger arc that plays over those six hours? You have to be really careful that you’re not suddenly all running around with guns, making a completely different programme.”

Usually, one writer would cover each two-hour story. But on this occasion, Ed Whitmore (Manhunt) penned the first two hours and then developed a loose outline for the rest of the show. Then four new writers were brought in to help complete the series.

“The title of the series is History – that’s the name of the story and that’s been chosen very carefully,” Lambon reveals. “It works on a few levels, but one is we’re very deliberately, over the season, going into the personal history of all four of our characters and trying to explore what makes them who they are.”

In fact, season 25 marks the first time Sam and Nikki will meet on screen, having never crossed paths in season eight when the former left and the latter arrived.

“There is a big difference in that, for eight seasons, the show was about that lone female, and that was an iconic thing of its time, having a strong female lead like that,” says Fox, who also exec produces the show. “When I came on, it was a heck of a responsibility and certainly I didn’t want to step into Sam Ryan’s shoes. But the show evolved into something that was more about the ensemble of regular characters. That is a big difference. Whilst I’m so grateful for playing such a strong female lead, I feel the other regular characters are strong leads too.”

Despite the character revelations that will unfold over the next six episodes, Silent Witness at its heart is not a police show but a forensics show. That means stories are told “from a certain corner of the room,” Lambon says, and information must be passed to the characters and viewers in particular ways.

“It’s not quite as straightforward as it is when you’re a police officer. If you’re investigating a murder, you can walk into any room as a police officer and start asking questions,” he says. “Nikki Alexander, in reality, can’t do that, so it’s about finding ways to tell a story that will be led by the pathology, by the forensics, by our central characters and what that means.”

“All credit to Nigel, who created this show about solving crime, but through the body and the clues that are found within the body,” says Fox, who has attended two real-life post-mortems during her time on the show. “I didn’t know what to expect when I went to my first post-mortem – there was a real fear I would not have a strong stomach – but it made me question life, actually. It also made me understand the interest in the series, which is about human beings, about mortality, about the time we have here and the amazing people who work in crime solving and also who deal with death – a subject we often find difficult to talk about but can talk about when it’s on television.”

That Silent Witness has lasted so long is down to the fact the show deals in dignity, Till adds, noting how the series features numerous dead bodies but the show is never gruesome or cruel.

“We’re not salacious about the crimes, and the audience comes for the puzzles because we know fixing things is what audiences delight in, from crime dramas to The Repair Shop,” he notes. “But you also stay with the characters because you engage with who they are and you know they care about the body, their personal history and the families of those who were left behind. The stories become really personal, and that’s crucial to the success of the show.”

“It’s the signature of the show itself, telling all sorts of different stories in different ways,” Fox says. “It has room for thriller stories or topical issue stories. Some of my favourite ones have been the ones which have the research [behind them], whether that’s gang crime, knife crime or how drugs affect young people and families.”

“That is also a big reason why it’s so successful internationally, because we cover a lot of ground,” Lambon says. “If you watch one week and think that story isn’t for me, you know next week will be completely different yet familiar because it will be the same characters and the same pursuit of truth and science. That’s a really key ingredient to making the show feel fresh. It keeps reinventing itself naturally because that’s what the format requires you to do.”

Making Silent Witness is “more complicated than it looks,” Lambon jokes. The show must present science and pathology in an understandable way, while there are also lots of graphics, a large amount of CCTV footage to create and some quite complicated prosthetics that must each reveal a type of pathology relevant to the story.

“You can’t keep using the same body under a sheet, you have to see it,” Till notes. “You can’t just talk about it. A lot of the time you do have to illustrate it.”

“With 25, we wanted to be more ambitious for the show, so in some cases we made life more difficult for ourselves,” Lambon says. “We start in Liverpool, we come back to London, we go to Belfast, and we genuinely go to these places. We don’t just tell the audience we’ve gone there and put a sign up.”

Fox’s own preparation for each episode includes pathology rehearsals, during which the cast will run through the post-mortem scenes and how they should conduct both external and internal examinations.

“Even though I’ve been doing it for 17 years, I still have to learn each time from the very beginning for each post-mortem we do,” she says. “But they really take that very seriously, the production, and give us time to work with the real medical experts on it. Otherwise, it’s like learning gobbledegook, and if I don’t know what I’m saying then I can’t say it. The post-mortem days are like exam days. I try to learn those as early as possible.”

Both Till and Lambon now back Silent Witness to continue to evolve and reinvent itself, while Fox will carry on “for as long as I love it – and I still love it now as much as I did the first day I stepped on set.”

“The challenges have been both personal and professional, whether that’s an action or emotion to do or simply in learning all the new medical stuff and trying to keep up with the forensic science side of it,” she says. “It’s been such a lovely thing for me to have been my life for this long, to be familiar with a character who is asked to do all sorts of different things each season.”

Real-life advancements in pathology and forensic science also give Silent Witness natural forward progression and mean the writers never run out of new ways to tell the stories that feature in the show.

“It’s one of those good examples where the brand is the star,” Till says of the series. “You want to tune in for the pathology and stay for the characters.”

“When it started, it was literally just one pathologist, and it has tried to keep up and stay with what’s actually going on in the world of forensics and crime solving,” Lambon adds. “All the time in the real world, they’re finding new ways to investigate and solve these crimes. If the show can keep up with that pace of change and keep finding ways to represent that on screen, I don’t see why it can’t carry on and why it won’t keep feeling new.”