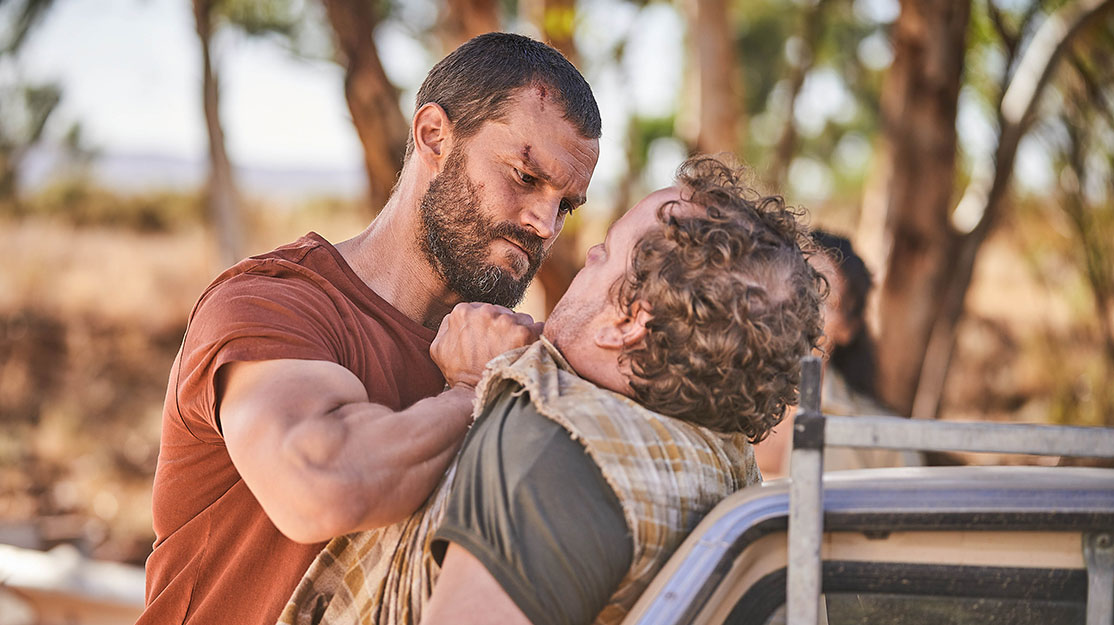 The Tourist writer Harry Williams and director Chris Sweeney take DQ on a trip to the Australian outback, where an amnesiac known only as The Man is searching for answers while being pursued by mysterious figures.

The opening sequence of six-part drama The Tourist is a heart-stopping ride. In the peaceful yet unforgiving environment of the vast Australian outback, a man is driving for his life as he is relentlessly pursued by a ferocious tank trunk.

If the scene draws comparisons to Steven Spielberg’s 1971 action thriller Duel, that isn’t by mistake.

“In terms of story, this guy gets into an accident and we wanted to embrace references of all kinds throughout the whole series,” says Harry Williams, who wrote the show with longtime collaborator and brother Jack. “There’s hundreds of them in there – tonal ones and literal ones. [Duel] was very much in our minds, but then it was about making our own version of that and having that live in this world.

“Tonally, the show jumps between modes and has comedic bits, thrilling bits and emotional bits. Marrying all our references and inspirations into this story with these characters was the challenge throughout. Certainly, starting with something epic like that just felt like the right thing to do. And it was not easy.”

Similarly, director Chris Sweeney wanted to create an opening sequence akin to those from James Bond movies, but admits he had never seen Duel until he looked it up on YouTube before filming The Tourist.

“I approach things from the perspective that most people are looking at their phone while also having a conversation with someone else, so if they glance up and it looks like something they’ve seen before, they’re probably not going to continue looking,” he explains. “So what could visually add to what the boys have written that could be amazing? I’d never directed a car chase before, so it required a little bit of homework, and then I just had to try to make it as fun and interesting as possible.”

Following that initial chase, the protagonist – known only as The Man – wakes up in hospital with no memory of who he is or how he got there. He subsequently begins a search for answers to questions about his identity and who is chasing him – and why.

But if The Man is looking for answers, so too were the the show’s writers, who didn’t know how The Tourist would end when they began writing the scripts.

“We really only did that once before and it ended very badly,” Williams jokes. “When you know where you’re going, you’re like, ‘Well, I’ll take the shortcut,’ or everything feels like you’re just putting obstacles in for obstacles’ sake. They’re not important, they’re not real things that matter in that moment, which of course they should be. Every element should earn its place and feel immediate and should conflict with all the other elements that are going on.

“Because it’s the two of us, you try to surprise the other one with potential turns and then pick holes in it, abandon it and then bring it back and go, ‘Fuck, we wasted three days.’ It’s an endless process where you exhaust a lot of avenues trying to keep hold of those elements that excite you and make you feel like this is something you would want to watch and will remember and would love. That’s the process of doing that again and again and again until you want to hurt your brother!”

Like the obstacles in The Man’s way, the characters that orbit his journey through the series also have to earn their place, from Herriman’s cop Lachlan Rogers to Ólafsson’s Stetson-wearing Billy.

“They’ve all got to be a help or hindrance to that character on that journey and they’ve got to impose themselves on him, or he’s got to pick them out and find them to be of use to him,” continues Williams. “They’ve all got to earn their place thematically and in terms of plot. The hope is that you fall in love with that person and you want to follow them, and that their story is going to be relevant to the central one you’re telling. It’s about keeping the connectivity, which is the thing that preserves those characters and makes them stand out.

“That’s also true of the really smaller peripheral characters like the cashier [in episode one] and other characters. Chris was like, ‘Let’s cast stand-up comedians or not just go to ‘The Big Book of Extras’ for these bit parts. Let’s make them really great people who you remember and you want to spend time with and don’t want them to go.’ He did such a good job with that because you do find everyone comes alive, all these other little people who jump into this story and impose themselves.”

From those initial drone-captured aerial shots to character-focused moments where the camera will sit on one person playing on their phone or dancing in their car, Sweeney (Back to Life, Liar) says he could immediately see how The Tourist – which debuted on BBC One on New Year’s Day – might look after reading the initial pilot script.

“What’s interesting when you’re trying to pick what you’re going to do next is you’re reading things and you’re like, ‘Can I see this?’ It felt so astoundingly obvious to me what it should be,” he says. “When we started talking about it, it was very quick to understand it’s got elements of the Coen Brothers. It’s got elements of extreme mystery and thriller. It’s got those bits later that reference films like Out of Sight – our mutual love of 90s movies was a bit of a playground. Then visually, the outback lends itself to that in a brilliant way. There were so many qualities about it that felt so self-assured that it’s on you not to mess it up.”

While Sweeney says he doesn’t “over-theorise” his directing style, he reveals that an opening shot that follows The Man’s car down a highway, only to pan back to reveal the truck in pursuit, was founded in his love of Paul Thomas Anderson films such as There Will Be Blood.

“That [scene] is really unsettling and surprising,” he says. “It’s coming off the back of something funny and then there’s a car chase and you’re like, ‘What on Earth is going on? I have to continue to watch to find out.’ If people don’t, they can come to me.”

Distributed by All3Media International, the series is produced by the Williams brothers’ Two Brothers Pictures for the BBC, Germany’s ZDF, Stan in Australia and HBO Max in the US. The Tourist’s blend of competing tones, from thriller and comedy to mystery, means it stands apart from the producer’s previous titles, which include The Missing, Baptiste, Liar and Angela Black, while Williams believes jumping between different genres means viewers will be constantly asking themselves, ‘What kind of show is this?’

“We have a history of making comedy shows [such as Fleabag] and doing very serious thrillers, so it’s marrying them a bit, using influences like Fargo or Martin McDonagh [In Bruges] or even Quentin Tarantino [Pulp Fiction] to create an odd, heightened world,” the writer says. “It’s hard to have a sudden chase and then a bit of something funny and for it not to feel disjointed, and that was something me, Jack and Chris talked about an awful lot.”

The fact that the Williams brothers and Sweeney had known each other since they were 10 years old and had similar influences meant they shared a shorthand when it came to imagining what scenes might look like. They were then able to pass on that vision to the rest of the crew.

“When you’re making a show, 150 people come together over for a very set amount of time and it’s got to happen. It’s actually like starting a start-up, but it’s only going to be live for six months, no matter what,” the director notes. “All these people have to work together, and you’ve got to convey tone to these people who need to do their jobs. Having known each other since we were children means there’s so much shorthand, and that was a real plus because tone is so hard. You can describe something and it can be taken 15 different ways.”

Filming in South Australia, the production ran the gamut of Covid-19 restrictions from relative freedom to near lockdowns, when Williams questioned whether the series would be able to wrap on time. Yet while some directors working in the UK might have struggled to find a fresh backdrop to their series, Sweeney identified plenty of new and unfamiliar locations against which to set the action.

“But then someone says, ‘But you’ve got to drive there for five or six hours’ and that’s going to be in your shoot day so, therefore, you can only shoot for two hours when you get there,” he says of the logistical challenges filming the series. “Everything also has to be linked to the nearest town. But when you are a massive production like we were, you can’t put everybody up in one town, so then people will be put up in three towns. That’s the challenge of trying to get something original.”

While the Williams brothers have become known for a particular brand of thriller – “Some people call us the Brothers Grim. We’re not very grim” – Williams says The Tourist is more representative of the kinds of shows they like to watch and like to write.

“We just found that The Missing did really well, so we carried on doing that for a period of time,” he says. “But this has been the most fun I’ve ever had making and writing a show, and it’s a show that I would watch more than any other show. This kind of storytelling and being able to be silly, absurd and odd and trying to do different things is really appealing. We’d like to continue down this road for as long as we can, until people say, ‘You’re not funny. Shut up. Write about something really miserable again,’ in which case we will do that because we need to feed our families.”