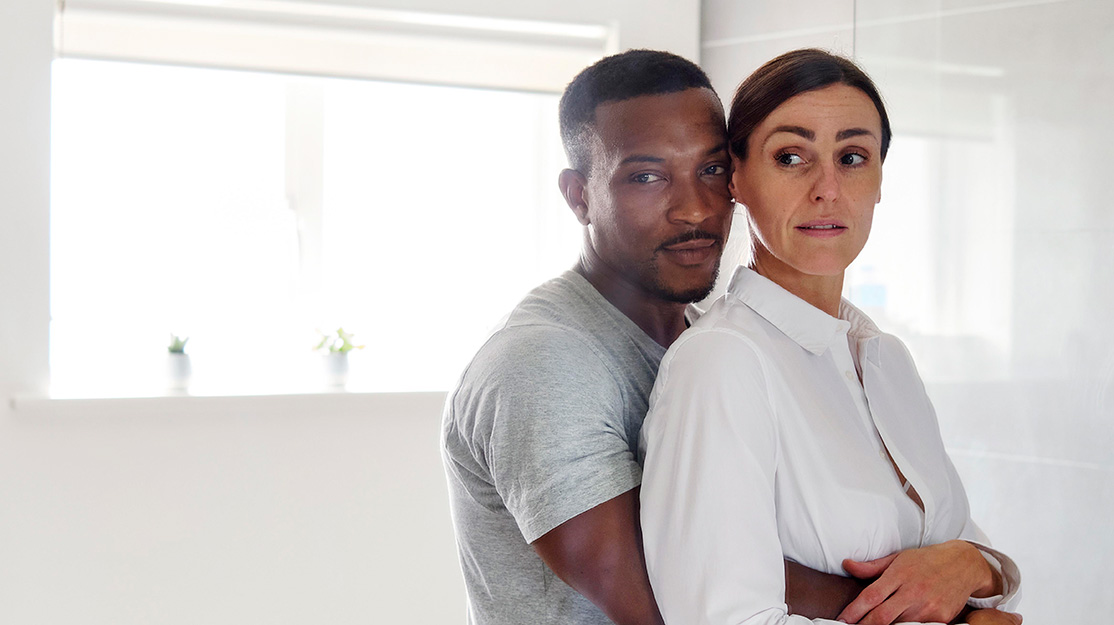 Star Suranne Jones and writer-director Dominic Savage discuss their collaboration on I Am Victoria, in which the actor plays a woman facing up to her own mental health struggles as she tries to hold her seemingly perfect life together.

In 2019, Bafta-winning writer and director Dominic Savage (The Escape) pioneered I Am, a unique drama anthology of three female-led films that were created in collaboration with the actors who starred in them.

Each individual film, which blends scripted and improvised drama with the use of an invasive handheld camera, tells the story of the title character – Jones’s episode, for example, is titled I Am Victoria. The plot follows them on a journey of change, one inspired by the leading actor’s own experiences, which heightens the sense of realism.

Season two begins with I Am Victoria, in which Jones plays a wife and mother trying to hold together the image of her perfect life. Yet almost immediately the cracks in her relationships with husband Christian (Ashley Walters), her children, friends and family begin to rise to the surface as the competing pressures in her life force her to confront her mental health struggles.

“When I first met Suranne, we just had a coffee and just talked,” said Savage, speaking during a Royal Television Society preview of the series. “It was just about finding common ground with each other. I don’t want to impose anything on anybody. I want to just talk and see where we get.

“As soon as we met, we just knew we had to make something together. We talked very quickly about themes we wanted to explore. It was a very organic, rather beautiful process. We connected very deeply in that first meeting. We both had a cry. It was just wonderful. It’s not just about a working relationship; it’s a friendship, which is very deep and powerful. We just kept going and kept talking, and then finally the time came and we knew we could do it. Then we started getting into the nitty-gritty of what we were going to do.”

Jones initially wanted to tell a story about a mother, and although she does play a mother in I Am Victoria, it is a very different story from the one she had initially envisioned.

“Over lockdown, we spoke and we refined and we just built this world,” the actor recalled. “What’s beautiful is you give all of your ideas, you bare your soul. You talk about life experiences, you take from each other and from my friends and from things I’ve read and been affected by. Then Dominic takes it all and he puts it into a story to make sure that it is removed enough from you to be able to be in a film, because the type of work we’re doing here is very deeply personal. But it’s very therapeutic and cathartic rather than traumatic.

“By having that, and with the support of the team, we both felt able to go ahead and dive in quite deeply. It’s quite a scary process because sometimes you have no idea what you’re doing.”

Jones and Savage both described making I Am as a constantly evolving process, adjusting and changing scenes right until they were about to be filmed. Savage rightly called it a unique way of filmmaking, one he has honed through his career and that doesn’t stand up to any sort of scrutiny or analysis.

“It’s its own thing, which I can’t even analyse,” he said. “It’s beyond analysis. It’s literally about a connection of trust, faith, belief and determination to tell a story we feel is important to both of us and, therefore, I believe, important to a viewer, to our audience. That’s the most important thing.”

Filming the series, which is distributed by NBCU International, proved to be even more intense and extraordinary than Jones had ever anticipated, as it was one of the first shows to start production in the wake of the first coronavirus lockdowns last year. The UK also experienced a scorching summer that added to the oppressive atmosphere on set.

“A lot of it had to be done in [Victoria’s] house, which wasn’t initially the idea, but it forced us into using the house more, which, of course, is the wonderful thing about the show now. It feels like a pressure cooker,” the actor explains. “But every day we felt that pressure. I remember a day when we were crying and sweating and releasing ourselves. It felt amazing because it just felt like we needed to do that, but what a beautiful experience.”

Jones also had to get to grips with Savage’s directing style, which includes takes that run to 45 minutes, or instructing the camera and other actors to follow her and continue scenes just when she thought they had finished.

“I thought I would be terrible at improvisation. I say this to any actor that wants to do this kind of work: if you know your character inside out, it’s actually very freeing,” she added. “Ashley had worked in this way a few times so I was safe with him and I really loved it.”

Launching on C4 tomorrow, with all three episodes also dropping simultaneously on digital service All4, the series is produced by Me+You Productions, whose co-founder Krishnendu Majumdar is now adept at working with Savage after also producing season one. “Once you understand it, it’s very simple,” he said, noting the use of a small crew, handheld camera and natural lighting on I Am.

“Dominic’s style of working is to try to create an atmosphere that can create truth and veracity in performances,” he continued. “The performances from the actors are so truthful; they feel so real. And that’s the kind of environment Dominic creates. My job as a producer is almost to defend that, to keep people away and to create a space for him to work. Dominic is like an alchemist; he is creating this world with an actor and it is a real collaboration.”

Victoria’s story started with a conversation about how difficult life can be for women who are dealing with the pressures of being mothers and providers, as well as pressures relating to physical appearance, social media and other aspects of modern life that “seep into all our souls,” Jones said.

“And if you don’t deal with them and if you’re not able to see what’s happening, Victoria happens. She’s trying to protect herself with exercise, with the perfect house, with cleaning everything, with making sure her children are presented well, with making sure people like her and making sure she’s doing the best spread. But she’s not being authentic because she’s lost the ability to see who she is and to see the life she wants, because things have clouded her in such a way that she has lost herself.”

“It’s not about gender, it’s about life,” Jones said. “When you try to talk about mental health, it’s not an ‘us and them’ thing. It’s something we all have. To look after your mental health is something we all should do and be more aware of. Dominic found it hard to make sure an audience understood what it was we were doing, so he came up with Victoria looking in the mirror and talking to herself so he could have a visual of what it was she was going through, because otherwise it’s all happening in her head. That’s why people can’t see mental health. It’s very clever what he did to ensure we understood what was going on in Victoria’s life.”

As the story continues, confrontations with her husband and then dealing with her sister’s financial problems only shake Victoria’s wellbeing further, which in turn hardens her sense of denial. It’s not until she admits to herself what is happening and that she is the only one who can do anything about it that she starts to deal with her breakdown.

“Something I find very powerful is this idea that we as people can change, and it’s only up to us to make that change,” Savage noted.

With so much material recorded across a filming schedule barely longer than a week, the story is shaped – and the power and intensity of the story identified – in the editing process, which is where Majumdar said the show’s magic happens.

“He’s the magician, but there are so many people on the floor with Dominic: the sound team, the DOP and particularly the actors,” he said. “They’re the ones who are creating those moments that feel real and speak truth. When I first saw it, it’s just so incredibly visceral. It doesn’t matter that I’m a man. I’ve felt that [what Victoria experiences]. I’ve known that or I’ve known people like that.

“These films are about humanity and they’re kind of beyond gender. I know it’s billed as a female-led series and obviously the lead actors are female, but they’re more than that. They just speak truth and they’re really powerful. And particularly with what the world is going through at the moment, what we’ve been through, it just feels that these films really speak to people.”

Playing Victoria might seem like a departure for Jones, who has notably starred in series such as Scott & Bailey, Doctor Foster and Gentleman Jack. But what links Victoria to the Bafta-winning actor’s other roles is the fact that they’re “all unusual women.”

“They’re not your average women,” she said. “They all need to be understood in the journey, in the process of watching them through the episodes or through the film. Doctor Foster was extreme, but we have to look at why she was extreme. There’s a psychology behind them all. Gentlemen Jack is fun and flamboyant, but very vulnerable. There’s a layer we need to peel back to understand how she built herself to become that person. Even in Scott & Bailey, Rachel was a very fun character, but she had a lot of flaws in her life. It’s about how a woman has built herself.”

I Am Victoria is now the actor’s “love letter to mental health.” “I just feel like I’ve put it out there, what I feel,” she added. “I’ve just opened my heart a bit and hope that someone will see it.”