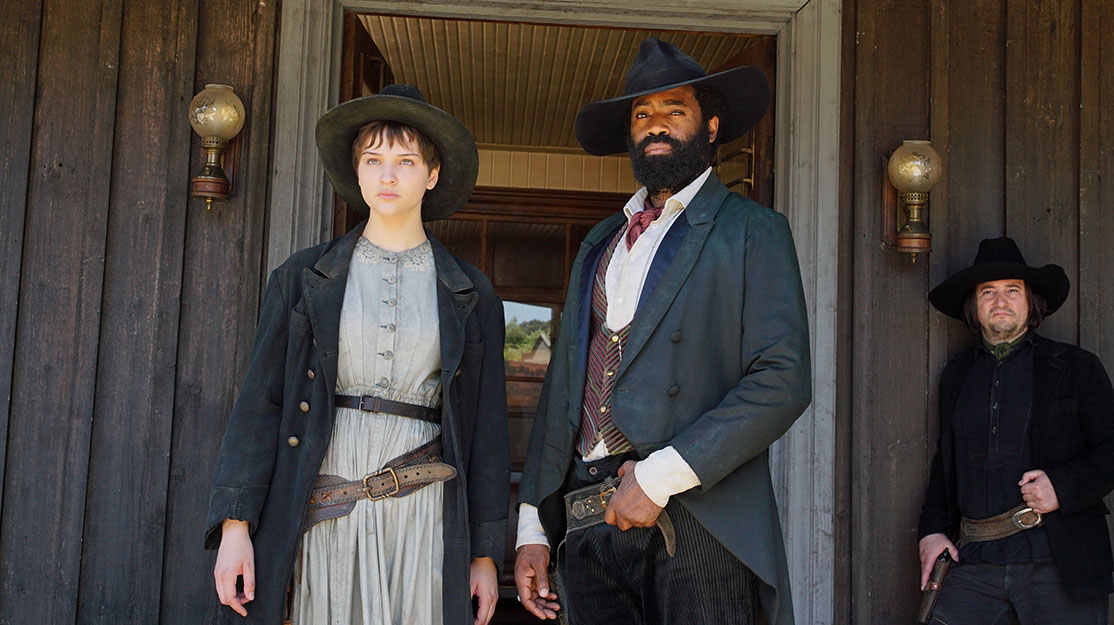 As anticipation builds for the launch of Sky and Canal+ original series Django, director Francesca Comencini outlines her approach to reimagining Sergio Corbucci’s influential film and discusses her love of westerns.

Italian director Francesca Comencini established herself as an awarding-winning maker of documentaries and feature films before moving into series. Her small-screen work has since included directing 15 episodes of Gomorrah, the acclaimed mafia series set in Naples, before she took on two episodes of Netflix Italian original Luna Nera, a witchcraft fantasy drama set in the 17th century.

Now, her latest job is lead director of Django, on which Comencini has reunited with Gomorrah writers Leonardo Fasoli and Maddalena Ravagli. The western drama series – more than seven years in the making – is loosely based on Sergio Corbucci’s cult film classic of the same name.

Set in Texas in the late 1800s, it centres on the titular jaded cowboy in search of the daughter he thought he’d lost years earlier. Following her trail, Django arrives in New Babylon, a town at the bottom of a crater, where all outcasts are welcome and where everyone is equal and free.

There, Django discovers that his now 20-year-old daughter Sarah is alive and set to marry John Ellis, the founder of New Babylon. Sarah – who blames her father for the death of their family, massacred many years earlier while he was at war – wants Django to leave. But he is determined to win a second chance with her and becomes a valuable ally to John, who must defend the town from antagonist Elizabeth Thurman’s attacks. Unbeknown to them, Django, John, and Sarah are linked by a web of secrets and a dark past bound to resurface.

An Italian-French coproduction filmed in the English language, Django is created and written by Fasoli, alongside Ravagli, who also wrote the series treatment with Francesco Cenni and Michele Pellegrini. Max Hurwitz also writes on the series.

Directing duties were shared by Comencini, David Evans and Enrico Maria, with filming taking place in Romania between Racos, Bucharest and the Danube area.

Premiering at the Rome Film Festival on October 16 ahead of its roll-out on Canal+ in France and Sky across Europe in 2023, the series comes from Cattleya and Atlantique Productions. It is coproduced by Sky Studios and Canal+, in collaboration with StudioCanal TV and Odeon Fiction, while StudioCanal is handling international distribution.

Here, Comencini discusses her role as lead-off director on the 10-part drama, her love of westerns and how her documentary background has shaped her directing style.

How did you come on board Django?
I joined Django while I was editing episode 10 of the third season of Gomorrah. It was different from all the other episodes I had shot because it took place in natural settings – we had been radically urban until then – and because it involved something similar to a showdown. All of this inspired me to shoot it like a western, a genre that I loved as a girl. When the Cattleya producers saw the episode, they offered me Django the series, which they were then starting to develop.

What was the appeal of the project?
I was attracted by the fact it’s a western. For me, as a girl of the 1970s,  American and Italian westerns embodied the spirit of rebellion. Furthermore, I was interested in recounting the crisis of patriarchy through the very genre that has done the most to codify standards of masculinity in the West.

How would you describe the visual style of Django, and how was this achieved?
It’s difficult to describe Django’s visual style. I hope it comes across as both punk and vintage, as well as thoroughly offbeat. I have always achieved my visual style in the same way, with the help of fantastic artistic collaborators, to whom I try as best I can to explain my very eccentric vision.

Is it a ‘traditional’ western?
Although Django is intended as a passionate homage to the genre, I don’t think it’s a traditional western. In many respects, its nature is quite sentimental, a family drama, especially given the prominence of the female characters – in particular, Elizabeth, the ruthless antagonist, beautifully played by Noomi Rapace.

Does your documentary background inform your decisions?
Making documentaries was my most significant training ground and it certainly influences everything I do – which perhaps explains a certain lack of polish and the quest for a form of unpredictability I always try to provoke on set.

What was it like working with the cast?
Django was my first experience with international and native English-speaking actors, and I admired their incredible preparation, drive and dedication. I believe the actors are the soul of our project, and that every movie or series is, as [French-Swiss film director Jean-Luc] Godard said, “a documentary about the actors.”

What was your experience like on set?
It consisted of incredible contrasts: it was very tough and very fun, like a dream in extreme colours. It was a huge set and a gigantic juggernaut that occasionally putt-putted along like a Vespa 50 from my adolescence.

How do you see the role of television director changing?
It’s changing due to greater collaboration among the myriad other people involved in the creation of a series. I enjoy such collaboration. I love to participate in projects with a very high level of demand on everyone’s part, which pushes us to do more and better, but it is important to acknowledge the roles of each individual and to respect them.

With so many series in production, how important is it to have a strong visual style to make it stand out from the crowd?
Competition among series is constantly increasing, given the growing number of productions. There is no doubt that defining a powerful visual signature is very important. But I don’t think anyone has a failsafe recipe for a successful product. We are always striving, in a way fortuitously, groping in the dark. We can only trust the honesty of our hearts and our emotions. I believe the most important feature of a hit series is its singularity, its personality, its uniqueness.