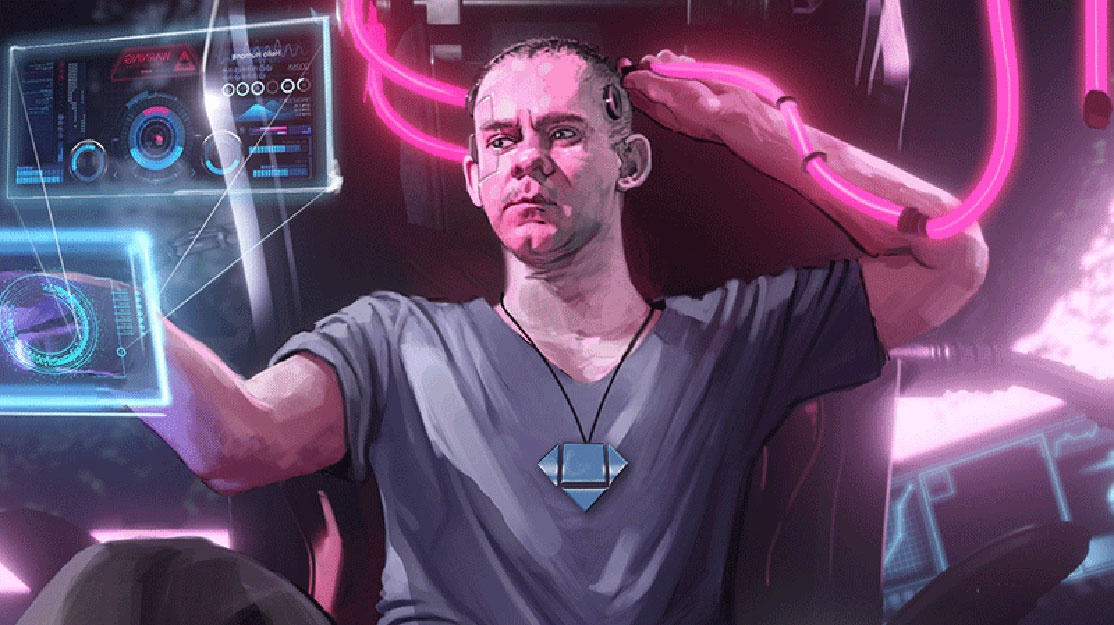 Weaving your own Threads

While recent series such as Kiss Me First, The Feed and numerous episodes of Black Mirror have explored the possibilities of world-building and storytelling surrounding virtual reality (VR), the technology itself has largely been reserved for docuseries that transport users to new and unfamiliar landscapes, such as Mount Everest or coral reefs deep beneath the ocean.

VR dramas are less common. The most notable example might be Invisible, which comes from The Bourne Identity director Doug Liman and is pitched as the first major scripted series designed specifically for 360º VR. Another is Halcyon, a crime drama that was described as the first ever hybrid VR scripted series, which aired on US cable network Syfy but also offered dedicated VR episodes.

The latest entry in this genre sees Toronto-based producer Cream Productions reunite with Lord of the Rings star Dominic Monaghan for VR sci-fi drama Dark Threads, an interactive experience that allows gamers to embark “on a fantastical journey of consciousness.” The star previously worked with Cream on science series A Curious Mind.

Set in the near future, users become avatars of a fictionalised Monaghan, who discovers his memories are gone and must piece together the clues with the help of a benevolent artificial intelligence (AI). The project launches today (July 22) on Oculus Rift and HTC Vive.

Dark Threads marks Cream’s first move into interactive drama production with ambitions to fuse its emerging technologies with cinematic storytelling. Described as a multiple-choice scripted series with three different endings, every option users take will affect the outcome of the story.

“Our goal is to push the limits of some of the proprietary technologies we work on as well as to try and bring human beings into digital spaces in compelling ways,” says Johnny Kalangis, Cream’s VP of digital and an executive producer on Dark Threads.

For those who are not regular users of VR, it might seem that interest in the tech has been and gone. “But actually, I don’t think it’s done,” he tells DQ. “This happens with emerging tech of all kinds. When somebody does one thing, everybody goes, ‘OK, well, we’ve seen that now so that we’re done with that.’ That was part of the reaction people had to 360 video, which is something that’s experienced in a VR headset, but it is a lot different to what we’re doing with Dark Threads.”

In fact, Kalangis compares the series more with a VR video game, thanks to its interactive premise and the immersive space users can explore as they travel through the storyline and are called upon to take action at various stages along the way.

“When you’re scripting and producing a television show or film, how we direct the viewer’s attention is the result of the way the piece is directed and the structure of the story is told in a linear fashion so it comes out at a certain pace,” he explains. “Those things can help create the engagement that an audience has. In something like VR, where it’s interactive, the experience is created in the way the audience themselves will choose how they’re going to experience it.

“In Dark Threads, when the story starts, you wake up and you are Dominic Monaghan. You don’t know anything about what’s happening to you and how it’s happened. It’s a science fiction story. The first voice you hear is the voice of an AI that you’ll learn later ‘you’ created, and in an attempt to make this AI work better, the character tried to transfer his consciousness, memories and everything into this computer and it got botched. Now you’re in an environment where part of the story is going to happen based on how you choose to navigate that space.”

Instead of being told a story through a progression of different scenes so the writer knows at every stage what the audience knows, in Dark Threads the order in which new information is discovered is entirely in the hands of the player. Although Kalaganis says the VR drama is not as straightforward as a choose-your-own-adventure story, which could have numerous threads that are never seen or explored at huge production expense, Dark Threads positions its player so that while there are elements of them choosing their way through the story, they in turn are also led through the VR maze and are left to confront big philosophical ideas.

“As the player, you’re kind of a shell that’s trying to piece together what’s happened,” he says. “Where the journey takes you pieces together philosophical and factual ideas and ultimately you find yourself back in the lab where you did this transfer and you are trying to decide if you’re going to withdraw the Dominic stuck in the computer and essentially reunite yourself with yourself and go about your business and or you choose to bring them both together to attempt, perhaps, human evolution that includes technology.

“We want to put the audience in a position where, in this fictional environment, they get to make a choice that human beings find themselves getting closer to: are we going to stay separate from computers or are we going to find a way to become closer to them? We’re already attached to our phones, but we get a lot of comfort from the fact that if we want to put them down we can, if we want to turn them off we can, versus being tethered to them in a more profound way.”

Compared with making a television series, producing a VR drama is “a different process from front to back,” Kalangis says, though there is one defining similarity: all stories need a beginning, a middle and an end. There’s also the idea of a narrative trajectory where viewers gain information through the course of the story – even if it might not be gained in the same order each time.

“But the difference is instead of locking a script and then shooting it, we would build an environment first,” the exec says. “From a traditional film or television production standpoint, you would try and lock everything as best you can and then schedule it and shoot it out. In this case, the process is so iterative that we might decide, after playing a room, ‘This is fun, I found I was more attracted to this, less attracted to that.’ We might test it with some users that don’t know what we’re trying to do and get a sense of what they’re doing and then model the next piece of production after that.

“We would build the environment with almost no art direction. It would be like walking around in a video game that has nothing in it, but you get a sense of, ‘How do I move around this room?’ You have to play it a little bit and then we construct from there. You start making modifications and the writing then supports that. But the scripts end up looking more like spreadsheets than they do a linear script. I can’t tell how long a player is going to be in a room. I don’t know. I can’t force them, but I will use design tricks to try to get them to move to certain places. And we were very careful about making sure people didn’t get confused, stayed engaged and then what information they were collecting.”

Kalangis admits VR is still a niche but could break into the mainstream if the addition of social features would allow VR experiences to be shared simultaneously among friends and family in the same way viewers follow their favourite programmes on Twitter or other social media platforms.

“The hardware is a barrier to entry and it’s a lot to picture huge audiences having VR,” he says. “There’s also such a social element to watching television and VR doesn’t offer that in any very mainstream way. The idea of being with people while you’re in a headset is one of the challenges of the format right now. VR shuts you out of everything and if you’re going to be experiencing a narrative, you’re doing it alone. The way this moves forward is when social features get added and we can all strap our headsets on and it’s a great way to spend an afternoon with friends. VR’s success and ability to build its audiences and users is going to be related to its social abilities, ultimately.”