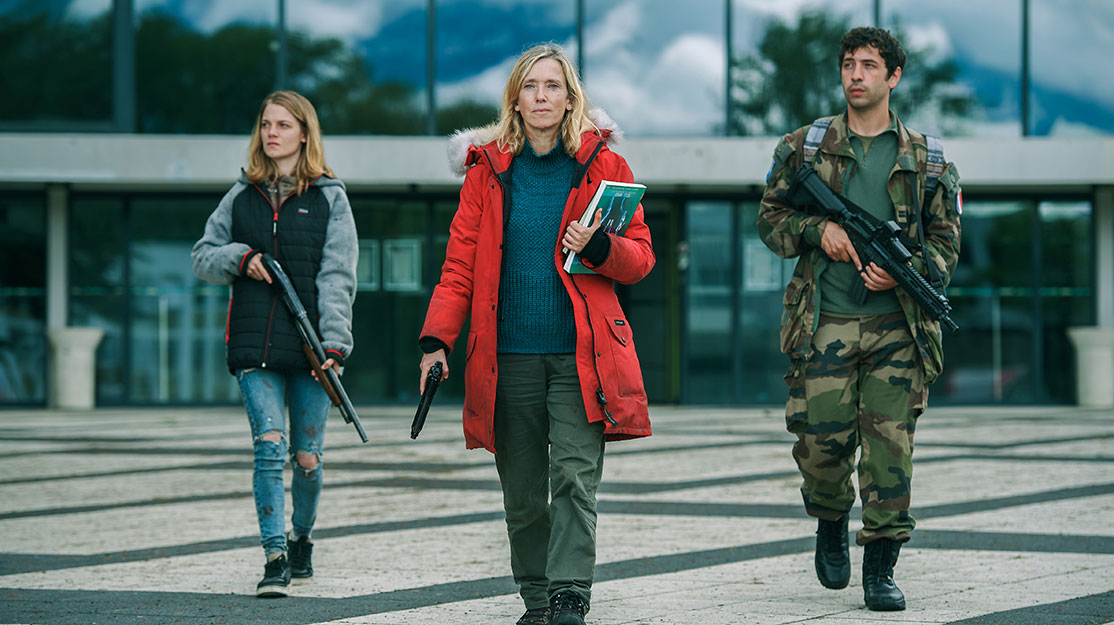 A trio of actors living together in a rented house in Cardiff with a social calendar packed full of dinner parties sounds enviable and fun, but not out of the ordinary. Throw in a global pandemic, months of lockdown and government-enforced social isolation, however, and the setup feels like a novelty.

At least that was true for Daisy Edgar-Jones, Ty Tennant and Bayo Gbadamosi, who became roommates during filming for the second season of sci-fi drama series War of the Worlds.

“We all lived together in the last month of filming and it became a nice hub where we could be around each other outside of filming, because we’d all been through this really lonely experience of being locked away because of the coronavirus,” Gbadamosi recalls.

Thanks to meticulous safety protocols that included regular Covid-19 testing, War of the Worlds was among the first productions to get going amid the pandemic last year. With the show set in present-day Europe, the production also took in numerous locations, including Bristol, Wales and France.

In the first season of the series, a reimagining of HG Wells’ classic novel, an alien invasion wiped out most of the human race, leaving behind just a handful of survivors desperately trying to remain alive and find out more about the extraterrestrials. Among them was neuroscientist Bill Ward (Gabriel Byrne) and his ex-wife Helen Brown (Elizabeth McGovern), former child soldier Kariem Gat Wich Machar (Gbadamosi), mother and son Chloe Dumont (Stéphane Caillard) and Sacha Dumont (Mathieu Torloting), and scientist Catherine Durand (Léa Drucker) and her sister, former drug addict Sophia Durand (Emilie de Preissac).

In the explosive finale, Emily, who has an unexplained kinship with the aliens, entered a spaceship located by the River Thames, where she found newborn babies and a human-looking alien. Picking up six months later, season two follows the survivors as they mount a fight to take back control of their planet, while Bill continues to investigate the similarities between humans and the aliens. With desperation increasing and the human resistance struggling, someone could have to face the impossible dilemma of sacrificing one of their own in order to save mankind.

Richard Clark directed the first four episodes of the second season, with Ben A Williams joining to direct episodes five to eight. Both seasons were written by series creator Howard Overman (Misfits, Merlin) and produced by UK outfit Urban Myth Films. StudioCanal is the distributor.

Premiering on France’s Canal+ in 2019, War of the Worlds has run on multiple platforms, including Epix in the US and Fox in Europe. This year, both seasons will be available on streamer Disney+ under its Star banner following the closure of the Fox channel in the UK in June. A third season is currently in production.

Joining the second season of War of the Worlds as new character Zoe is I May Destroy You’s Pearl Chanda. “She is the leader of the resistance, and you meet her when she’s trying to organise the fightback against the aliens. She doesn’t have empathy for the aliens looking like humans and she pushes Bill to make morally ambiguous decisions,” Chanda explains.

Playing a fighter was a new experience for Chanda, who quickly adapted to filming multiple action scenes. “There was a day of filming where there was a lot going on, including an alien invasion of a leisure centre. I was having loads of fun but, when I got back to my hotel room, my heart was beating [quickly]. It was unusual and I wasn’t expecting that reaction,” she says.

Chanda wasn’t the only actor to have an unexpected response to a fight scene. “Bayo [Gbadamosi] had never shot the [prop] rifle before so he was practising with armour on,” Chanda continues. “The rifle was really loud and really intense and was throwing blanks out. Ben [A Williams] then did the shot and said to Bayo, ‘That was really great, just don’t smile, as you look really happy.’ That really made me laugh.”

For Gbadamosi (The Great), one of the best parts of filming War of the Worlds was the mix of green-screen work and character-driven, emotional scenes. “On some days, we would shoot emotionally charged scenes where you’re feeling out other characters and really locking into the text,” he says. “Other days, you’re reacting to stuff that isn’t there and you feel silly doing it, but when it all comes together it looks great. Plus, you get to use your imagination and be playful like a kid in the process.”

To get in the mindset of Kariem, Gbadamosi says he researched child soldiers and refugees, including reading the memoir A Long Way Gone by Ishmeal Beah, who was a child solider during the civil war in Sierra Leone in the 1990s, and speaking to a friend who had volunteered at the ‘Jungle’ refugee and migrant encampment in Calais.

During season two, which launches tomorrow, Gbadamosi says Kariem’s friendship with Emily deepens. “One of the main things for Kariem this season is trying to understand the connection that Emily has to the aliens, as she is a character he cares deeply about,” he adds.

Meanwhile, Emily’s younger teenage brother Tom grows up a lot over the eight-part season, according to Tennant (Doom Patrol), who plays him. “I found I wanted him to be less talkative, less sarcastic and less physical. If anything, Tom is just surveying the room and learning,” he says.

Tom is Tennant’s first major role on television, the actor having decided to abandon his A-levels to join the cast. “It was a weird and strange decision, because it’s a choice that will impact you for the rest of your life,” he says. “I don’t imagine myself going back to finish my studies now, though.”

Growing up binge-watching comedies such as the US version of The Office, Tennant says being on set has been a “surreal” experience, adding that he’s grateful for being treated like an adult rather than “just some kid who showed up.”

Playing Tom’s mother Sarah Gresham is Natasha Little (Absentia), who describes her character as initially the least equipped to deal with an alien invasion and the disappearance of her daughter Emily. “She would have just been dealing with normal teenage challenges, like deciding what to do with a gap year. Instead, her son is wielding a gun and endangered every day, while her daughter has a strange connection with aliens that nobody understands. The repercussions of that are enormous, but she has evolved, developed and adapted,” Little says.

Little drew on the experience of living through a pandemic for her scenes. “We filmed quite a lot in Wales, which was slightly behind England in terms of easing lockdown,” she says. “Like everyone else in the world, I’ve experienced something that’s obviously not as extreme as an alien invasion but certainly makes you aware that your normal life can change very quickly and you have to adapt to a new normal.”

Just how quickly the survivors in War of the Worlds adapt to their new normal remains to be seen.