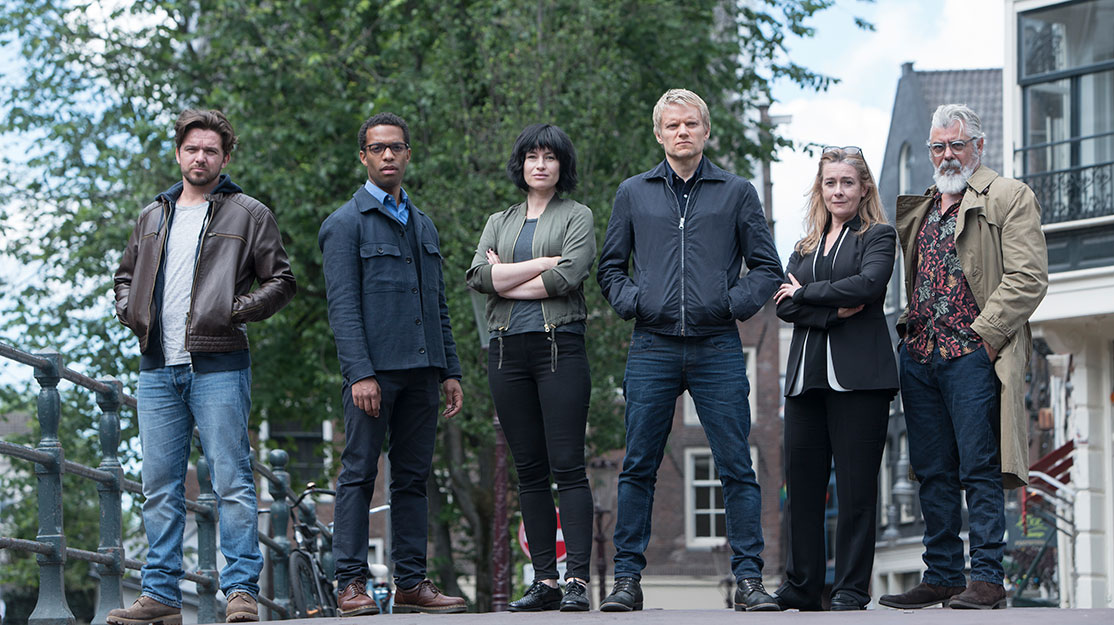 Dutch detective Van der Valk is coming out of retirement, with a new version of crime drama Van Der Valk coming to ITV. DQ visits Amsterdam to see how the show is embracing its location.

Visiting television sets often leads to some strange locations – standing next to Daniel Craig waist-deep in a snow drift outside a Soviet-era tower block in a cheerless suburb of Riga in the bleak midwinter, anyone? But surely nowhere quite a strange as this.

We are on a jetty in the West Docks area of Amsterdam beside what looks like a floating, decommissioned three-storey oil rig. It is, in fact, the former broadcast platform of illegal television station TV Noordzee, which has been dragged in from the North Sea and converted into an up-scale restaurant called REM Eiland.

You can have a very pleasant dinner on the former helipad on the top of the structure, which is flanked on one side by cranes the size of the Empire State Building and on the other by an enormous estuary along which gigantic cargo ships chug. You can also make a swift exit in the lifeboat that hangs from the lowest deck of the REM Eiland.

As we stand there admiring one of the world’s most unusual restaurants, a car suddenly screeches to a halt on the jetty and a troop of gun-toting baddies – all dressed in black, just in case you didn’t realise they were villains – leap out and charge towards the restaurant in pursuit of a detective. That detective is none other than Piet Van der Valk.

Nearly half a century after the character debuted on our screens, ITV is bringing the venerable Dutch cop out of retirement. Van Der Valk originally ran for five seasons on the UK broadcaster between 1972 and 1992, with Barry Foster in the title role. But he is a very different vase of tulips this time round.

As played by Marc Warren, the popular star of such shows as Hustle, Mad Dogs, The Musketeers and The Good Wife, Van der Valk is a moody loner. In this iteration, his loyal wife Arlette has been replaced by a disparate team of fellow detectives played by actors such as Maimie McCoy (The Musketeers), Luke Allen-Gale (Captain America: The First Avenger) and Elliot Barnes-Worrell (Ready Player One).

“People would be quite right to ask, ‘Why not make something new?’” says Chris Murray, the creator of this rebooted version. “But rebooting something that is already familiar and popular gives you confidence as a writer. The world, the brand and the character exist. Trying to bring it to life again is less frightening than starting a show about a Dutch detective with a different name.”

For her part, McCoy believes audiences will very soon see this interpretation is quite distinct from the original, which was much more closely based on Nicolas Freeling’s bestselling novels. “People who might remember the old show will forget it very quickly because this is so different,” she explains. “Once they grasp that this Van der Valk has no wife and a new team, viewers will immediately immerse themselves in this new version.”

Producer Keith Thompson adds that this is a much more modern take on the streetwise detective. “What Chris Murray has done is completely reimagine Van Der Valk. It’s in no way a homage to the original. The character, the tone and the team are all very different. We went back to the drawing board and have created something 21st century. We have completely modernised it,” he says.

“It’s pacy and deals with more off-the-wall material. Look around the skyline and see how many cranes there are. They’re building like absolute crazy and creating a whole new world here. Our version of Van Der Valk is about that new Amsterdam.”

The other point of difference is this interpretation of Van Der Valk – which is produced for ITV by Company Pictures in coproduction with Masterpiece in the US, Germany’s ARD Degeto, NL Film in the Netherlands and distributor All3Media International – steers clear of any clichés about the Dutch capital.

Murray, who has previously written for crime dramas such as Agatha Raisin, Midsomer Murders, Lewis, New Tricks and Missing, stresses: “We try not to go down the stereotypical Amsterdam route because that’s a false perception of the city.

“The red-light district full of stag and hen parties does exist, but it’s such a small part of the city. We made a conscious decision to show the real Amsterdam away from the tourist hotspots. We were eager to avoid drunk Brits!”

The city certainly makes for a terrifically distinctive setting for the series, which comprises three feature-length episodes beginning in the UK this Sunday. Thompson, who has also produced Vikings, New Tricks and Foyle’s War, remarks: “Amsterdam is a great character to have in a drama because it has a personality all of its own.

“Morse and Lewis had Oxford and Van der Valk has Amsterdam. It’s difficult not to use the term ‘laid back’ to describe the city. It has a very embracing culture with a multicultural society. You don’t feel any racial tension here. They had gay pride here last weekend and the police, the fire brigade and the post office all had their own barges. The Dutch are very open-minded and liberal people.”

The production is certainly taking advantage of every opportunity afforded by the city, with the show being produced entirely on location in Amsterdam. “We are shooting everything here. The locations are amazing,” Thompson continues. “For instance, Van der Valk’s police station is one of the best cop sets I’ve ever seen. It’s an old bank building on a canal – where isn’t on a canal?

Van Der Valk also conjures up the atmosphere of tolerance that distinguishes Amsterdam. Murray observes: “The second episode is set in a heroin-addiction clinic that is funded by the government. You’d be hard-pushed to find a government-funded heroin clinic in the UK. Van der Valk is very non-judgemental because he has been brought up in that tolerant environment.”

Murray emphasises the fact that the central character mirrors his city. “Van der Valk reflects the seen-it-all, done-it-all nature of Amsterdam. It’s his city. If a crime happens, something is out of kilter and he has to fix it.

“He is an everyman who can hang out with judges and criminals. If he has a mission statement, it is that he is there for the common man or woman. In the first episode, two bystanders are caught up in something bigger. Van der Valk wants justice for them because he looks out for the common person.”

In one scene, a villain proclaims, ‘Innocent bystanders are not my problem,’ leading Van der Valk to reply: “’They are mine and always will be.’

“That’s the benchmark for Van der Valk,” Murray says. “He always goes the extra mile for the Regular Joe or Joanna.”

Murray also highlights the fact Van Der Valk is a very European show. “I really like the European element of it. The timing did seem right. At a time when Britain is arguably ceasing to be European, I thought it was a good idea to set the series in a city that epitomises the best of Europe.

“Amsterdam has always been a melting pot and has a long tradition of liberalism. You can feel the energy and the confidence here. We may not be in a position to enjoy that for much longer – except perhaps with an expensive visa!”

Looking ahead, Murray doesn’t feel like he is done with Van Der Valk yet. “Amsterdam is a city full of great stories. There are so many more that I would love to tell,” he adds.

McCoy hopes audiences will be as taken by the world of Van Der Valk as she has been. “We’ve got the best lighting cameramen in the country. The show will look very cinematic,” she notes. “If I were in the audience, I’d want to watch this, just like you’d want to watch a drama set in Copenhagen, Malmo or Prague. Van Der Valk offers viewers a whole new landscape, and that’s really exciting.”

The actor has just one caveat: “After watching Van Der Valk, everyone will want to come and hang out in Amsterdam. But we don’t want too many people coming here because it has a lot of tourists already and we love it as it is!”