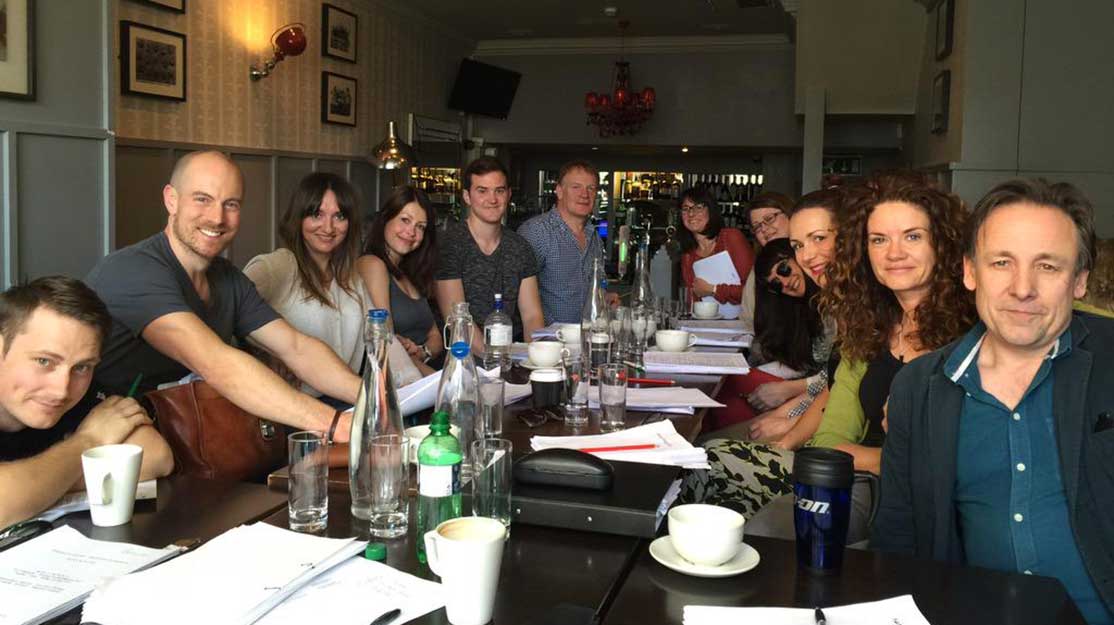 A new political drama dares to go where James Bond couldn’t – the corridors of power at the Welsh Assembly. Michael Pickard reports.

When film fans flock to cinemas to see the latest James Bond release later this year, one prominent location will be missing from the action.

Spectre’s producers had hoped to stage some scenes inside the Welsh Assembly Government’s main debating chamber, known as the Siambr, but their initial enquiries were knocked back.

Since then, however, the producers of a new political drama have taken advantage of an offer to film in public areas of the assembly, the Senedd, which will be the setting for a series that imagines what life would be like in Wales under a ruling rainbow coalition of parties.

Byw Celwydd (cast members pictured above), which translates as Living a Lie, sees the country run by parties called The Democrats, The Nationalists and New Conservatives, with the Socialists in opposition, creating a bitter rivalry where tensions are never far from boiling point.

In particular, it follows journalist Angharad Wynne, played by Cath Ayers, as she tries to uncover political scandals and secrets within the Welsh Senedd.

Producer Branwen Cennard, who collaborated with writer Meic Povey on the series, says: “S4C were incredibly keen to do a political drama. The assembly is very well established so there was a feeling we should do something.

“It’s been very interesting because I started working on it two years ago, before the Scottish independence election, and before the UK general election, so we had to imagine what the world would be like in 2016, when the series will air. I decided to go for a coalition government in Wales, which has happened, but this is a rainbow coalition, which hasn’t quite happened yet.

“So ours is a purely fictional political landscape, but it’s hugely interesting. I’m hoping that because it is a rainbow coalition and because the Socialists are in opposition – forcing us to look at everything from a completely different angle to what the reality is – it will appeal politically to a broad spectrum of the audience.”

Cennard says that when creating the Welsh-language series, she and Povey, along with scriptwriter Sian Naomi, had to remain politically balanced to avoid painting any one party as the villain of the piece.

“It’s been interesting because obviously you have to have conflict to create drama, and you’ll never get more conflict that you would in a rainbow coalition,” she says. “The marriage between the elements we need to create drama and the elements that occur naturally from politics has, hopefully, been successful.”

Cennard’s Tarian production company will see Byw Celwydd launch in the wake of another hit drama for S4C, Teulu, which has finished after five seasons. The show was a family saga set in the Welsh seaside town of Aberaeron.

Byw Celwydd is also designed as a returning series, but that doesn’t mean viewers can expect a cliffhanger ending at the end of its initial eight-part run, which will take over S4C’s Sunday 21.00 slot in January 2016.

“We decided it would be very unfair and unsatisfying for viewers, and for us as well,” says Cennard. “We haven’t quite done it but the main character – the Welsh political editor for our fictional TV news channel – her raison d’être is to find the truth and expose it. But she is sitting on a dark and deadly secret of her own, and that’s what drives her story. She comes face to face with her past in episode one in the most shocking way. By the end of the series, you know what her dark and chequered past actually is.”

Episodic storylines will also cover topical issues at the heart of Welsh politics, such as education and health, which come under devolved powers from the UK Government.

“In other episodes we’ve gone for a more tabloid scandal element with someone involved a car crash. They’re over the (drink-drive) limit with someone from another party who they shouldn’t be in the car with, and we look at how that affects their careers,” Cennard reveals. “With our Democrats, in the first episode the leader is discovered dead and there’s a leadership election. We’ve gone for a situation with a husband-and-wife team where the husband assumes he is the heir apparent and it will be his job. The wife is persuaded to stand against him, and wins.

“I’m Welsh, the writer’s Welsh, we work in Wales, it’s in Welsh. It’s not a case of making it Welsh, it is Welsh. We bring with us a very strong identity and hopefully that will shine through.”

A rainbow coalition of political parties, a female political leader and a journalist digging up dirt on the political establishment? These elements will inevitably lead to comparisons with another political drama, the hit Danish series Borgen.

“I watched Borgen and I was a huge fan,” says Cennard. “We wanted to do something that was inherently Welsh and feels possible to the Welsh audience. Of course, there are similarities (with Borgen). They had special advisors and journalists as well, so you can’t pretend it hasn’t influenced us. It has, but hopefully Byw Celwydd will stand on its own two feet.”

Cennard started in the television business as a junior script editor for producer Peter Edwards’ company Lluniau Lliw, the firm behind drama Noson yr Heliwr (aka A Mind to Kill), starring Philip Madoc. Twenty years ago, she produced her first series, Iechyd Da, which was set in an environmental health office in the Rhondda Valley.

Other credits include Belonging, an English-language series for BBC Wales that starred a pre-Torchwood Eve Myles.

“The premise of Iechyd Da was that you had a north Walian guy move to south Wales to work in this environmental health office,” she recalls. “Twenty years ago, green issues and recycling were completely revolutionary so we were before our time with that series. That was very successful. I produced five series of it, and through that formed my own company. I’ve worked continuously really.”

Cennard now hopes Byw Celwydd can follow in the footsteps of another Welsh-language drama, Y Gwyll (aka Hinterland), which broke out onto the international scene. Filmed in both Welsh and Welsh/English versions, it first aired on S4C before it was picked up by BBC One Wales, and later UK-wide BBC Four. It also aired in Australia, Finland, Iceland and France, among other territories.

Cennard says: “Hinterland’s done a terrific job, as A Mind to Kill did before it. By being sold to different countries, it brings people’s attention to Wales, and actors who have been in Hinterland have been seen in Australia and across the world. Some of them have been given jobs off the back of it, so it’s a terrific thing.

“I do hope Byw Celwydd will engage people who wouldn’t normally watch a political drama. It’s been quite tricky getting that balance between getting the politics right and making the stories complex, but also being entertaining for those people who just want to pour themselves a glass of wine, sit back and be entertained. I hope it will work on both levels.”