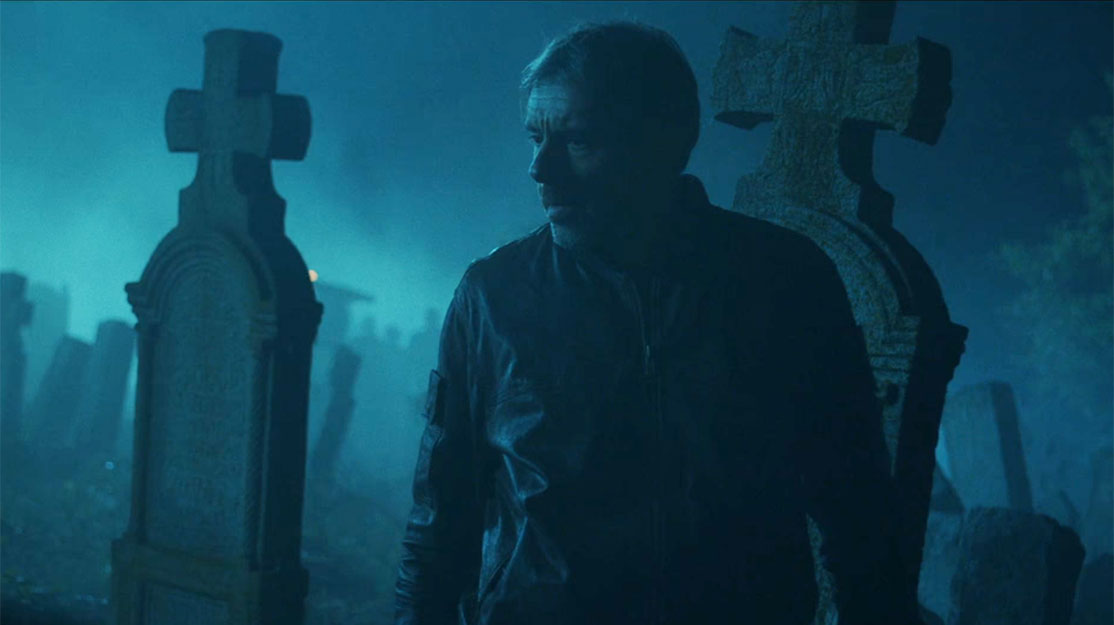 Blending elements of psychological thriller with supernatural horror, Serbian drama Crna svadba (Black Wedding) opens in the aftermath of a massacre in a remote village in Eastern Serbia. When Secret Service operative Petar comes to investigate, he finds himself entangled in an ancient conflict between good and evil.

Created by Nemanja Ćipranić and Strahinja Madžarević, the show’s cast is led by Uliks Fehmiu (pictured above), Jelena Djokić and Nikola Kojo. It is produced by Firefly Productions for local broadcasters Superstar TV and Radio Television of Serbia, with global sales handled by Firefly International.

Following Black Wedding’s screening as part of the Berlinale Series Market at the Berlin International Film Festival last week, showrunner Ivana Miković and Ćipranić, who also directs, tell DQ more about the 10-part story’s roots in real life and why this series stands out among others from Serbia.

Introduce us to the story of Black Wedding.
Ćipranić: Mitar, a peaceful man from a small village, goes on a killing spree that ends with a hostage situation. Petar [played by Fehmiu], a Serbian Intelligence Agency negotiator, comes to the crime scene trying to rescue hostages and calm the killer down. Black Wedding is a multi-layered drama series set within the boundaries of a psychological thriller/mystery and with elements of supernatural horror. The main theme is the eternal battle between good and evil.

Why was this a story you wanted to tell?
Ćipranić: When the massacre that inspired the show happened, I was really shocked. Curiosity about superstition and magic are deeply rooted in the people from this part of the world, even among religious people like myself. This genre really is my cup of tea, so the idea was to make a fresh take on it, mixing genre staples with local folklore stories that have never been seen on screen.

Who is Petar, the main protagonist, and how do we follow him through the series?
Ćipranić: Petar is an intelligence agent who specialises in negotiating. He is a man with many wounds from the past. The main reason he is broken is the death of his only son, for which he blames himself.
Even though his rationality prevails, he’s open to other, supernatural elements relating to the case at the centre of the series. Natasa [Djokić], on the other hand, is a psychologist who is appointed by the court to give her professional evaluation of the killer. She is a hardcore feminist, rationalist and a pretty tough character but also a very dedicated single mother.

How did you develop the series?
Ćipranić: From my first idea to the first draft took about two years of research and development in general. Strahinja Madzarevic, my co-creator and scriptwriter, and I tried to be as accurate as possible. We had supervisors from the church, police and profilers, and, of course, magic experts.
After we developed the detailed storyline, storyboard and shoot list and attached visual references and other details, we came to Firefly. I can’t thank the production company enough for having the courage to produce this. In terms of genre, it is a groundbreaking project in our region. The whole process, from the idea to the airing of the first episode in October last year, took about three-and-a-half years.

What was the writing process like?
Ćipranić: Strahinja and I wrote the concept. After that, we did our research and started working on the storyline and building the characters. Then we came up with an arc for a season-long story and for each character so we knew where we were going. There were endless conversations and rewrites, which led to the development of scripts for the first three episodes and treatments for the rest of the season.
At the same time, I worked with the DOP and the storyboard artist so that when we came to pitch the project to Firefly, we had a well-packed project with a script, treatment, first episode storyboard, visual references and explanations. After the show was greenlit, Firefly creative director Boban Jevtic oversaw the whole writing process, with up to 19 drafts of each episode.

How does the series blend mystery, horror and psychological thriller?
Ćipranić: In my opinion, those genres blend naturally. We have a plot that is basically a thriller. As the story goes on, more and more mystery elements come, along with disclosures and new characters. As the end nears, you realise it blends into horror. Genre is a tool for telling the story. It is important but not as important as the story itself.

What kind of visual style does the show have and how was this achieved?
Ćipranić: Our reference for the visual style was neo noir, using dark tones and a blue colour to create a moody atmosphere. Conversely, in the 1970s flashback scenes, we predominantly used yellow and lighter tones, with a grain – emulating 35mm film – to create a nostalgic atmosphere, combined with archive footage. Thanks to thorough preparation with DOP Igor Marovic, every shot was thought through and improvisation on set was reduced to a minimum.

Where was the series filmed and how are locations used in the story?
Ćipranić: Belgrade was the main set but we used Eastern Serbia, the picturesque village of Borac and the medieval city of Smederevo, the biggest preserved fortress in Europe. The idea was to portray Belgrade as a big, modern city in which all of the modern-day plot takes place; where old beliefs, religion and folklore are substituted with modern-day values and conformism. The countryside is used to depict the spirit of colourful past times.

Nemanja, how do you like to work as a director on set and with the actors?
Ćipranić: Directing is the most inspiring job. You create something from scratch. Working with the actors, I use this principle: rehearsals, conversations about their character, what drives him/her, what troubles him/her, finding out who their character actually is. When an actor becomes a character and doesn’t just act like one, that is when you know you’ve done your job well.

Ivana, how would you describe your role as a producer and showrunner?
Miković: I heard about this project several years ago, and as soon as I met with Nemanja after setting up Firefly Productions, I wanted it on my slate. The appeal of the story – a genre never seen in Serbia – the approach Nemanja and his colleagues had, and my own interest the story were what attracted me to it. I tried to let Nemanja get what he wanted, because his belief and eagerness, as well as his love for the project, are the best drivers if you want to have great results. I saw this as a commercial opportunity too.

What challenges did you face in development or production? Did Covid-19 affect the production in any way?
Miković: When we started developing the project, we couldn’t even imagine that by the time we were about to film, we would enter a new era – Covid. Prep began at the start of Covid, and we had to put things on hold for a couple of months. But we didn’t waste time – Nemanja and the rest of the crew fine-tuned the script. We filmed when Covid was raging, and it was tough to organise the production under those terms, but with all the precautions, we ended up with not a single crew member infected.
The preparations took six months and filming itself took almost four months. The challenge was then in post-production: this project had the most VFX ever for a Firefly production and it took time and patience to go through all the material and find solutions. We were very happy in the end.

Why do you think the series might appeal to international viewers?
Miković: The fresh approach and the nostalgia of the 70s, combined with the modern, well-paced and structured story, sprinkled with the elements of ‘Vlach magic’ – which is what I call Balkan voodoo – will be something for international audiences to look at. This is the first time exorcism has been tackled as a topic in Serbia, with the church forming part of a plot in a way it never has before. The premiere took place at the Sarajevo Film Festival and attracted a lot of attention, and I am very proud it was selected to be screened in Berlin.

How representative is Black Wedding of Serbian drama?
Miković: It is not a classic Serbian drama series, firstly because of the topic and secondly because Firefly Productions gave their best to raise the production standards and to match the standards of a good international production.

What new opportunities are there for writers in Serbia?
Miković: Serbia is booming. More than 1,000 hours of series have been produced in each of the past three years. The Serbian market has around seven million viewers. As such, there is a great opportunity for writers to create. Firefly works with experienced writers but also leads the writers rooms and is open to young writers who want to take part in pushing boundaries and going into unexplored topics and untold stories.