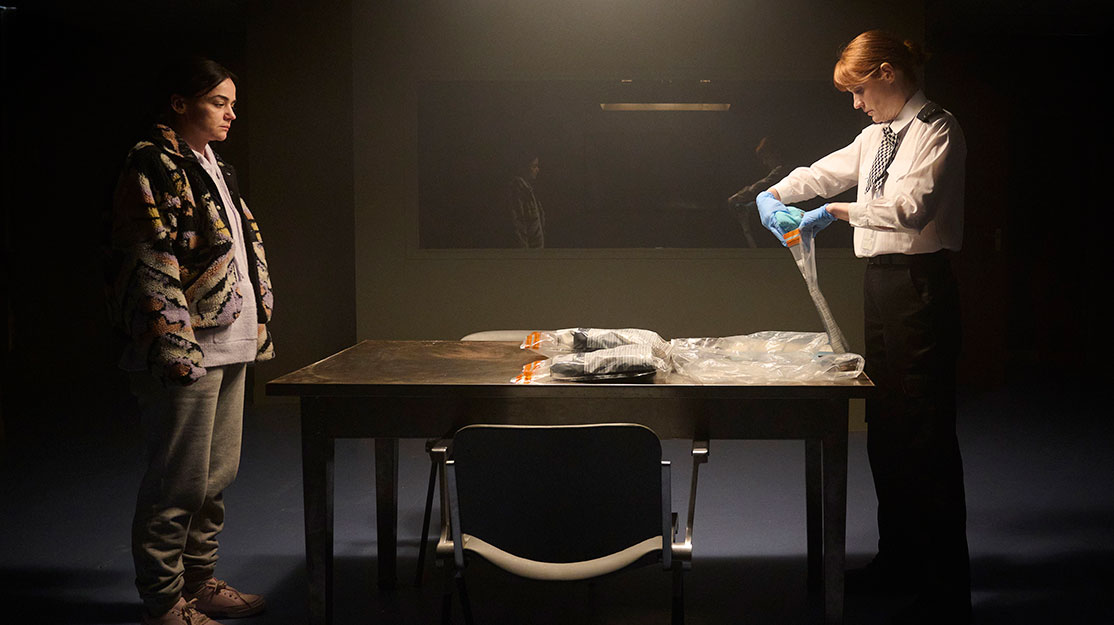 Co-director Brian Hill lifts the lid on how Maryland, Lucy Kirkwood’s stage play about the culture of violence against women, was transformed into a compelling piece of television starring Hayley Squires and Zawe Ashton.

Lucy Kirkwood describes her 2021 stage play Maryland as a “howl” against the normalisation of violence against women and how women, especially those of colour, cannot rely on the forces of law and order to protect them.

Written in the wake of the murders of women including Sarah Everard, Bibaa Henry, Nicole Smallman and Sabina Nessa in particular, Maryland debuted at London’s Royal Court with a revolving cast that gave nightly script-in-hand performances of the half-hour play, which follows the experiences of two women after they have both been sexually assaulted.

Director Brian Hill, who knew Kirkwood but had never worked with her, liked the sound of her latest work when it was first announced and asked to read the script with a view to turning it into a film to bring it to a wider audience.

After receiving the script, Hill went to see the show live. He loved it, and immediately emailed BBC chief content officer Charlotte Moore suggesting the broadcaster take a look at the play. The very next day, he got a call from Suzy Klein, the BBC’s head of arts and classical music TV, saying the pubcaster wanted to back an adaptation of Maryland.

“In terms of a speedy response, it was amazing,” says Hill, whose credits include films such as Falling Apart and Consent. “I’ve got a history of doing stuff about male violence and the treatment of women, both in documentary and drama. I’ve made films in women’s prisons, I’ve made films about sex trafficking. It seemed to fit in with the work I’ve done in the past and I just think it’s so important.

“It’s also really important that men get involved in this kind of discussion and this kind of work. Obviously, that was a discussion that had to be had at the beginning, about my involvement in a film that was written by a woman, features largely women and was about violence against women. In our first conversation, I said to Lucy, ‘Are you happy with me directing this?’ She said, ‘Yeah, of course I am. You’re a real ally. It’s not a woman’s problem, it’s everyone’s problem and until men get involved nothing’s going to change.’ Subsequently, when people thought [Hill directing] might be a bit difficult, I said to Lucy, ‘Why don’t you co-direct it with me?’ and that’s what happened.”

Retaining the stage show’s 30-minute running time, the TV version of Maryland is a compelling, thought-provoking and ultimately vital piece of drama that applies Kirkwood’s script to a film shot in celebration of its theatrical roots. Hayley Squires (who starred in Kirkwood’s Adult Material) and Zawe Ashton (Fresh Meat) play two everywomen, both called Mary, who meet each other at a police station after their respective sexual assaults. Guiding them through what happens next are PC Moody (Daniel Mays) and PC Eddowes (Justine Mitchell).

The story begins in a darkened room, a nightclub, where Mary (Squires) is dancing alone. At closing time, she pulls on her coat, puts a key between her knuckles and begins her walk home. Out on the street, she disappears into the darkness at the end of a dimly lit underpass and the title card flashes up, before cutting to Mary in her flat, packing bloodied clothes into a plastic bag.

PC Moody then arrives – seemingly pleasant, awkward and full of misplaced humour – to take her to the police station, where she meets another woman called Mary (Ashton), who has been through a similar experience but is responding in a different way.

Maryland has a distinct theatrical feel to the way it is shot. Interior settings are minimally dressed and never fully developed, with props and lighting used to suggest where the characters are rather than actually showing, for example, Mary in a nightclub or at a police station. In one early scene, the camera also pulls back to show the walls between characters standing in different rooms.

“I didn’t want to do anything that was naturalistic,” Hill explains. “Because most of it is set in the police station, I didn’t want to look like The Bill circa 1990s. I was quite happy for it to be unnaturalistic and to retain some of the theatricality of it because the language is more theatrical as well.

“That was a decision made right at the very beginning, that we would strive to give it that kind of slightly odd feel. It was never going to look naturalistic. That was very much a conversation with the production designer, the director of photography and all of those people right from the beginning.”

Writing in the wake of the 2020 murders of Henry and Smallman, and then Everard and Nessa last year, Kirkwood completed Maryland “really quickly” and the Royal Court jumped in to stage the play just as fast. Because of the quick turnaround, performers read their scripts on stage, while the minimal set dressing meant Kirkwood and Hill didn’t have anything to which they could refer when they were developing the TV version.

The production team from Century Films spent most of their time looking for the right location, requiring a versatile space that could be made to look a bit like a police station, a flat, an interrogation room and a supermarket car park. They found what they were looking for at a former school in Neasden, north-west London, with the surrounding area also providing the necessary mixture of outdoor locations.

“I suppose one of the influences was Dogville, the Lars Von Trier film where it’s all shot in a big studio and you just have lines drawn on the floor saying ‘living room’ or what have you, so we wanted to suggest it was a police station, one you could believe in, without having extras walking through and phones ringing and stuff like that,” Hill explains.

Then when it came to casting, “everybody was just really keen to do it,” he says. “People really responded to Lucy’s writing and [the fact that] it’s an important subject. The cast were great, they really got on board with it. When we explained that we had to get this unnaturalistic look, they were all happy with that.”

Filming was completed in just five days, and the tight schedule meant Kirkwood and Hill couldn’t cover every scene from every possible angle and then assemble the finished film in the editing room. “We essentially didn’t have the time,” Hill notes. “We had to devise a way of shooting it that meant we had the coverage to make everything work without doing close-up, two-shot, reverses, wide shot, top shot… We just couldn’t do that. That fitted with the aesthetic of the piece anyway.

“I would have liked a couple more days, but every director says that. There’s never enough time or enough money. But it was great and everybody pulled together. Everybody realised we had to be quick and it just galvanised people. Everybody on the crew really believed in it. A lot of people were doing it not for the usual rates, because we didn’t have the money, so people just believed in the subject and believed in the writing.”

Co-directing with Kirkwood, Hill took charge of pre-production – looking for the location and briefing cast and crew – as the writer juggled other commitments before joining the shoot.

“I’d keep Lucy up to date with what we were doing,” he says. “Then on the shoot, she was great at giving notes to actors, because of her theatre background and because she wrote it. We agreed that she would concentrate on the actors and I would concentrate on the crew and the look. Obviously, we both fed into each other’s areas but, in very broad terms, that’s what we did.”

What makes Maryland more than a piece of fiction is the introduction of the ‘Furies’ – a group of five women who throughout the film deliver their own experiences of assault, either in cutaway monologues or beside one or both Marys, but always directly to camera. Their revelations then build to a crescendo by the story’s conclusion, highlighting the injustices women face both in the world of the play and in real life.

“That was the biggest challenge, I guess, to try to make them convincing and make them look like they were part of it,” Hill says of integrating the Furies within the fictional drama. “It was easier when you could see them in the scene or in the background of a scene. But then when they were doing their monologues, that was a bit difficult. But again, we did all that around the school and we found ways of making the car park look like a supermarket car park – or suggesting it. We did it all through suggestion.”

One standout scene features a single-take shot of both Marys leaving the police station together, while the Furies mix in front of and behind them, individually talking to the camera at various different points in perfect choreography.

In preparation for that scene, Hill rehearsed with a couple of production assistants before the actors playing the Furies – Zainab Hasan, Jennifer Joseph, Sarah Lam, Gabriella Leon, Sarah Woodward – arrived on set.

“I just did a lot of timings, so if we start here and if we start there, we knew how long it was going to take,” he says. “We did it a lot, because I knew we wouldn’t have time to do 20 rehearsals on the day. I made sure we did all that prep beforehand so we could get the timings just right.

“A lot of it was single takes. We shot it from some different angles, but we didn’t have the time to cover everything as much as you might have done in a more traditional drama.”

The script used in the film is “pretty much as she wrote it,” Hill says of Kirkwood’s original play. “We did a new beginning because the beginning was originally the Furies, and once we shot it, we decided it didn’t really work. Then we decided it would be better to get Hayley dancing in the club, so we reshot that. But apart from that, it’s pretty much the same. Lucy is such a great writer and so careful about how she chooses her words that you wouldn’t want to mess with it. There’s not a comma or a full stop that she doesn’t consider carefully before putting in there.”

Maryland debuted on BBC2 last month to overwhelmingly positive reviews, while it has also been screened at the Galway Film Festival. Hill hopes the film continues to get people talking about what BBC’s Klein describes as one of the most pressing social problems of our time.

“I just hope it gets people talking about the issue,” he says. “It’s not like these are isolated cases. Women are being killed every day, so I hope it gets people talking about it and spawns more work of this nature. One of the great things about Lucy’s writing is she can write about this, the heaviest of subjects, and she still manages to get some humour into it, which is no mean achievement when it’s such a tough subject.”