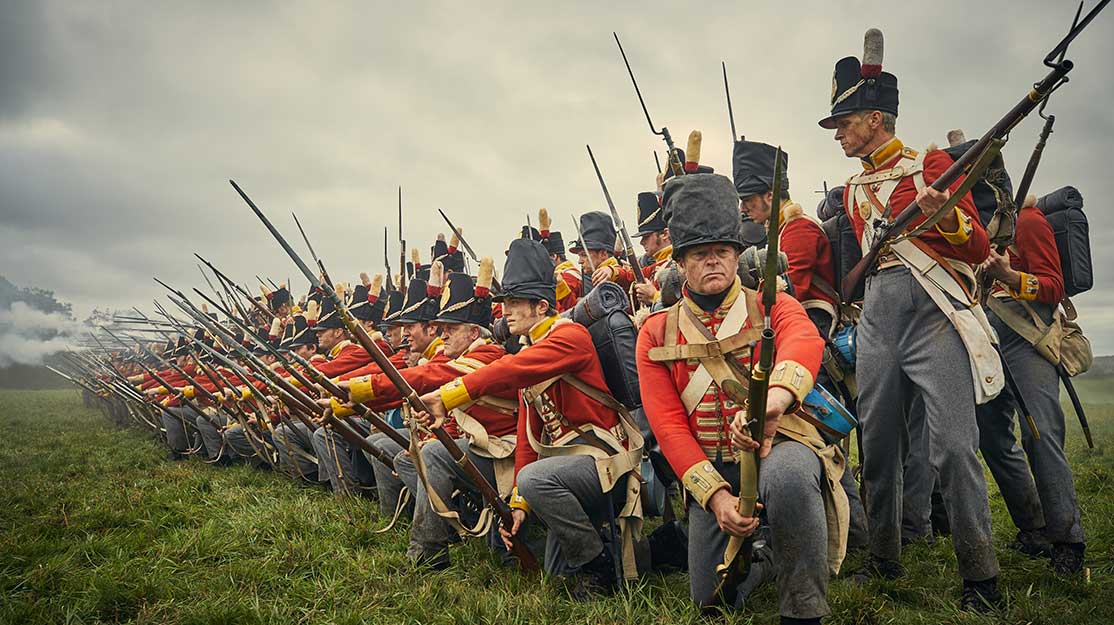 William Makepeace Thackeray’s classic novel Vanity Fair has been adapted for UK broadcaster ITV and streamer Amazon. DQ speaks to the writer and some of the key creative talent behind the camera to find out how this strikingly contemporary series was made.

Ten years ago, Gwyneth Hughes began writing an adaptation of Vanity Fair, William Makepeace Thackeray’s 19th century novel long considered a classic of English literature. Her modern update of the story never made it to screen, however, and her work was left unfinished.

Fast-forward a decade and Hughes (Dark Angel, Remember Me) has penned a new version, this time keeping its period setting, which will premiere in the UK on ITV on September 2 and on Amazon Prime Video in the US later this year.

Set against the backdrop of the Napoleonic Wars, the story follows Becky Sharp as she attempts to claw her way out of poverty and scale the heights of English society.

Hughes describes the source material as “an absolute romp” that bounces between extremes, from light comedy to terrible tragedy. She has sought to keep that variation in her adaptation, but says large parts of the second half of the book have been trimmed, when the pace of events becomes decidedly slower. As a result, the Battle of Waterloo, which happens halfway through Thackeray’s tome, takes place in episode five of the seven-part series.

In relation to the story’s heroine, “all the other characters have money, they’ve all got family and middle-class incomes, but she’s alone in the world,” the writer says. “She thinks she deserves better, and her sense of entitlement that drives her all the way through the story is a really modern theme, in bad ways as well as good. In the end, you love her without liking her because she behaves so badly at times – but that also makes her extremely relatable.”

Despite making some cuts, the production sought to be as faithful to the source material as possible. On set, producer Julia Stannard would carry copies of Thackeray’s novel as well as Hughes’ scripts so the subtext of the author’s work was never lost in adaptation.

“With seven hours of drama, you’re asking people to make a big investment in terms of their time to keep coming back and watching, so you have to care about the characters,” Stannard says. “That is a big challenge for Vanity Fair because it is a world inhabited by flawed characters. So how do you make it emotionally engaging without dumbing it down or changing the original text? Thackeray cared a lot about these characters and I think we’ve created a world in which our audience will care about those characters too.”

After working on several contemporary series such as Broadchurch and Liar, director James Strong found the new challenge he was looking for in Vanity Fair, revealing that he was drawn towards the variety and scale of the story as well as the team he would be working with. The series comes from Mammoth Screen and is distributed by ITV Studios Global Entertainment.

“Gwyneth had done an amazing adaptation; she distilled the essence of the book into the story so, for me, it was about finding a visual language that made it feel relevant, exciting and interesting,” Strong says of his approach behind the camera. “Some period dramas can be quite reverential and respectful. This one I wanted to feel very much like it was a period drama shot in a contemporary manner.”

In practice, Strong used zooms, steadicam and handheld cameras to shoot the series, mixed with wide-angle lenses that could convey huge scale. “Then you’re up close with the characters in an intimate and personal way, always with Becky at the heart of it,” he explains. “Her vision, her perspective of the world around her, also dictates the camera pattern and style, so we look at it though her eyes quite literally in many ways.”

Stannard picks up: “We wanted to put together a cast that felt surprising, so Olivia was not a TV name, she’s a movie star. Martin Clunes is in his first big period drama, Frances de La Tour is a national treasure. And our young cast, I can guarantee, will be household names in a couple of years. Johnny Flynn, Charlie Rowe, Tom Bateman, Claudia Jessie, they’re all incredibly talented young actors.”

Shooting began in September 2017 and finished at the beginning of February, with most filming taking place in London. The crew also spent time in Budapest, which doubled for scenes set in Brussels and Pumpernickel, a small Germany principality featured in the novel.

“A lot of them have to be period-correct so it was a big challenge to find the right locations,” Strong says. “A lot of settings [such as characters’ houses] are composites so we do the drawing room and the bedrooms in one place, then you do the exterior in one place and the kitchen or the garden somewhere else.”

All in all, Vanity Fair was shot on 120 sets across 12 weeks. And while the series was filmed entirely on location, visual effects played their part in bringing the sets to life.

“The job has definitely changed over the years and I’m embracing it because we can’t physically do everything,” says production designer Anna Pritchard (Broadchurch, Top Boy). “The time pressure of building streets and covering roads, especially when you go back in time and do 1815, there might be one Georgian building but it’s changed so many times… You could build from scratch but you know you’re spending thousands and thousands of pounds and it doesn’t ever look 100%. So what VFX can do for us is absolutely amazing.

“It was such a beautiful project to work on because it was so varied – we got to build streets and all the characters’ houses. I loved every single one of them. Even going to Budapest was fantastic. We made good use of their period architecture.”

With location logistics and actor availability complicating proceedings, the production schedule was akin to a military exercise – quite literally when it came to filming sequences recreating the Battle of Waterloo, the centrepiece of the show. “We had 300 men playing Napoleonic soldiers living in camp. We had 50 horses, plus armourers, explosions. We had VFX, drones and sometimes two or three shooting crews, costume and make-up,” reveals Strong. “All of that is a massive undertaking and, at the centre of it, you’ve got to keep the vision going and deal with the weather and whatever it throws at you.”

Strong is no stranger to televisual set pieces, having assassinated JFK in Hulu drama 11.22.63 and overseen multiple alien invasions in Doctor Who. But he hadn’t orchestrated a Napoleonic battle before. Likewise, Hughes had previously never written a war scene.

“There’s actually more of it [in the script] than Thackeray wrote in the book,” she says. “And never in my whole writing life have I been asked to write a scene that began ‘Ext – Battlefield – Day.’ You write that and then think, ‘Now what?’ I learned to write a battle, so that was fun.”

“Day one and, oh my gosh, it’s war – and how are we going to do it?” says Pritchard, recalling the first time she read the script. “It’s all about the cavalry, the horses, the cannons and the weapons, the artillery and the armoury. But the wonderful thing about battles is it’s all set in a field. So for me, it’s not so much about what I’m going to build but the art of war and how we make it look good. A lot of fine detail and research went into that.”

Stannard, however, is well versed in battle scenes, having previously produced War & Peace for the BBC. So when she joined Vanity Fair early in its development, she was quick to call in military adviser Paul Biddiss and horsemasters The Devil’s Horsemen, having worked with both on the Tolstoy adaptation.

“Thackeray doesn’t go into a great amount of detail about the battle but what was important was these are very privileged young men and they have never really faced any challenges in life,” she says. “Suddenly they’re thrown onto a battlefield, young men in their early 20s, and they literally don’t know what’s about to hit them. It’s about the shock and the contrast between their very privileged lives in London and the reality of suddenly becoming soldiers. That felt like a massive journey for those characters and it felt like it would be a cheat if we didn’t show the audience that and let them share that experience.”

Hughes has form when it comes to television adaptations, having penned a version of Charles Dickens’ The Mystery of Edwin Drood. She also wrote the biographical Miss Austen Regrets, based on the life of novelist Jane Austen, known for works such as Pride & Prejudice and Sense & Sensibility.

“You don’t have to read Vanity Fair. It’s alright, I read it for you,” Hughes says, echoing the words of fellow writer Andrew Davies when he spoke about adapting Tolstoy’s War & Peace in 2016. “So for people who never pick up a book, they can still enjoy this wonderful story. We always come back to these stories because they are the best stories ever written. That’s why they’ve lasted.”

That timelessness is also why Stannard believes classic works of literature continue to be remade for the small screen. “I’m not really interested in making drama that just feels locked in that time,” she says. “What I’m interested in is looking at the key themes of the book and what’s happening for those characters and relating it to the here and now.

“It’s a great challenge to adapt a book that’s been adapted before. The biggest challenge for us was probably making it feel fresh and different. I hope and believe we’ve done that.”