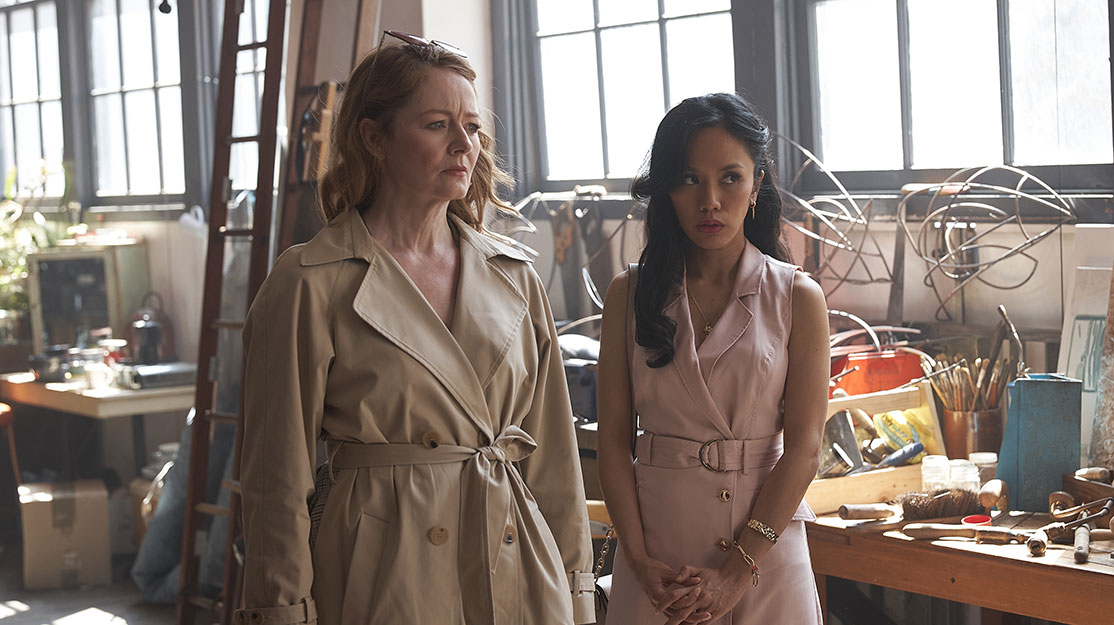 Angie Fielder and Polly Staniford, the founders of Australia’s Aquarius Films, discuss the making of soapy heist drama The Unusual Suspects, shining a light on the country’s immigrant experience and casting real-life couples.

As a movie producer, Aquarius Films’ recent projects include Oscar-nominated biopic Lion and psychological thriller Berlin Syndrome. And the Australian producer’s television slate is equally diverse, ranging from tween drama The Unlisted and comedy The Other Guy to upcoming projects such as children’s series Parent Up and The Subjugate, an adaptation of Amanda Bridgeman’s dystopian novel.

With around 20 projects in development across their film and television slate, company founders Angie Fielder and Polly Staniford admit it’s hard to define a common theme among the titles.

“But there’s definitely things we’re drawn to, such as female-driven stories or internationally facing stories. We’re drawn to big worlds and characters, with Australian elements here or out in the world,” Staniford tells DQ. “We’re very genre-agnostic. We’re interested in all genres and all kinds of entertainment. It just really has to hit a nerve with us when we first read it. It has to have something about it, almost like a magical ingredient that makes us go, ‘This is something we have to tell.’ You need to know there’s a real passion there and that you’re going to love it not just in two weeks but in 10 years.”

One such series, currently in post-production, is The Unusual Suspects. Dramatic, funny and over-the-top, the four-part heist caper tells a tale of female friendship and empowerment while shining a light on Filipino culture and community.

When a A$10m (US$7.6m) necklace is stolen from self-made Filipina businesswoman Roxanne Waters’ home during her twins’ extravagant birthday party, the ensuing police investigation threatens to expose cracks in the sparkling façade of Vaucluse, an eastern Sydney suburb that’s home to hidden rivalries, shady business deals and forbidden affairs. Among those coming under suspicion are social darling Sara Beasley, whose seemingly perfect life is quickly falling apart, and her long-suffering nanny Evie.

Unusual by name, unusual by nature, the project was first brought to Aquarius by public broadcaster SBS, reversing the roles played in a traditional pitch process.

“SBS came to us with an idea they felt fitted into their charter,” Fielder reveals. “It was basically two paragraphs on a page with a picture: the focus was on female friendship, a group of women from various different walks of life, different socioeconomic and cultural backgrounds coming together in an entertaining romp of a show that also unpacked the plight of the immigrant experience in Australia.”

Aquarius is keen to back female stories, but Fielder and Staniford were also interested in the idea of talking about immigration in Australia in a fun, entertaining way – a quite different approach compared with other SBS issue-led dramas such as Safe Harbour and Hungry Ghosts. In particular, The Unusual Suspects focuses on the Filipino experience in Australia via a cast of wealthy characters and the network of Filipino immigrants who work in their homes.

“The appeal of the Filipino aspect was that we hadn’t seen a show here or actually anywhere that showed that specific cultural immigrant experience in Australia. That really appealed to us,” Fielder says. “Setting it in this wealthy eastern suburb of Sydney, which for a broader international audience is not unlike the Beverly Hills of LA, it has that real heightened opulence. We just felt like that was a really great contrast, and potentially there was a lot of comedy to be had within the characters from that world.”

“From our very first writers room, we invited Filipino migrant workers who had experienced the lives of the characters that we were creating into the room as cultural consultants,” explains Staniford. “Vonne has written across the whole show and also became an associate producer because he had so much to contribute towards all aspects of the show. We also had a great script consultant, Margarett, who was across all the workshops as well.

“Then when it came to putting the actual show together, it was really important to us that we had a Filipino director on board as well. Melvin is a Filipino-Australian director we’ve been tracking for some time, and we really thought this was a great opportunity for him to do his first episode of television. We also had Filipinos in other departments. With all our shows, we always try to find opportunities for culturally diverse people to step up and get opportunities, but particularly on a show like this where you’re actually telling the story of a particular culture. It’s really important that those people are embedded in all departments.”

It was during the script readthrough that the Filipino cast members were also able to bring their ideas about character and story to the table and talk about their own experiences. “It’s like this other layer of authenticity to the writing process, which was a really great process for them but also for the writers,” Fielder continues. “Sometimes when you say the words ‘immigrant experience,’ it has all these connotations and it’s definitely complex and complicated. But we wanted to make sure the characters were empowered and that we were showing the complexity of what they’re dealing with, but allowing them to succeed and rise up against that adversity. The show is in no way bleak; it definitely unpacks a particular part of that immigrant experience but in a way where the characters are able to take back control of their lives, so it’s ultimately very life-affirming.”

At the beginning of The Unusual Suspects, viewers are introduced to the main ensemble of characters and their worlds as the links that tie them together are slowly revealed. But the heist storyline that drives the story is never far from the surface, with the show frequently flashing forward to see numerous characters during police interviews as they are questioned about events that are yet to take place. That non-linear structure was implemented to heighten proceedings from the start and remove the feeling that the first couple of episodes might be “too domestic” before the heist actually takes place.

“We really wanted the show to feel edgy and commercial and to really tease that mystery from the first episode,” Staniford says. “The flash-forwards bring in a sense that something’s going to happen. The title says it all – everyone’s a suspect – but we also wanted the idea of red herrings, that there could be other people involved and other characters who, even though they’re not involved directly, play into the drama and what happens.”

It’s not only the heist that brings these women together but also the social structures in which they have found themselves stuck – whether Australian or Filipino – and the bad experiences with men they also have in common.

“They all go through a huge transformation,” Staniford adds. “It is this idea of women coming together to succeed and take back what’s theirs. There’s a twist in there where it’s a victimless crime so no one gets hurt. They don’t actually do anything that’s wrong, if you like, but it’s swept up in what looks like a big criminal masterplan.”

The locations and costume design combine to give the series a sense of affluence and glamour, helping to build the worlds of each individual character, while filming took place in a part of Sydney that might be unfamiliar to some viewers.

Being on location was just one of the aspects of production complicated by the pandemic, which delayed the start of filming in March last year. Pre-production then resumed in August, with strict guidelines and protocols in place. The nature of the series means some characters are in relationships or have intimate scenes, but the producers avoided the need to rewrite those scenes by casting Otto and Moore’s real-life partners Peter O’Brien and Toby Leonard Moore. Otto and O’Brien’s daughter is also in the show.

Finding the homes of the characters proved to be the most challenging part of the production after the availability of some properties changed as a result of the pandemic. “So in the middle of the shoot we were looking for other locations and of course, during Covid, during lockdown, people don’t want to leave their homes, let alone let a whole film crew touch everything and be in their house,” Staniford says. “That was the biggest challenge, shooting in that period where no one really knew what the new guidelines were and trying to figure out new protocols and how that slowed things down. [The series] was one of the first things to start shooting after pandemic so it definitely had its challenges, but we were just so grateful to be back in production.”

Though not all the characters will be immediately likeable, particularly social media guru Sara, the producers believe viewers will be able to relate to some elements of them all when the series debuts on SBS later this year. They also believe the series – distributed internationally by APC – stands out as “something a bit different.”

“It’s definitely a bit of a wild ride,” says Fielder. “It’s definitely got a gloss to it that feels international and it’s a real genre piece. We do a lot more straight-out drama in Australia, whereas this is heightened drama with comedy elements. It’s not something that’s been done before.”

“It’s got all the classic tropes of a great heist film or story, but characters I feel like we haven’t seen before,” adds Staniford. “In some weird way, the fact that Covid’s happened has possibly been a blessing for this series because, at the moment, audiences want hopeful, uplifting, fun stuff. This is a real escapist, fun piece with a beautiful locations that are aspirational and fun for an international audience. We really hope audiences are going to love it as much as we love it.”