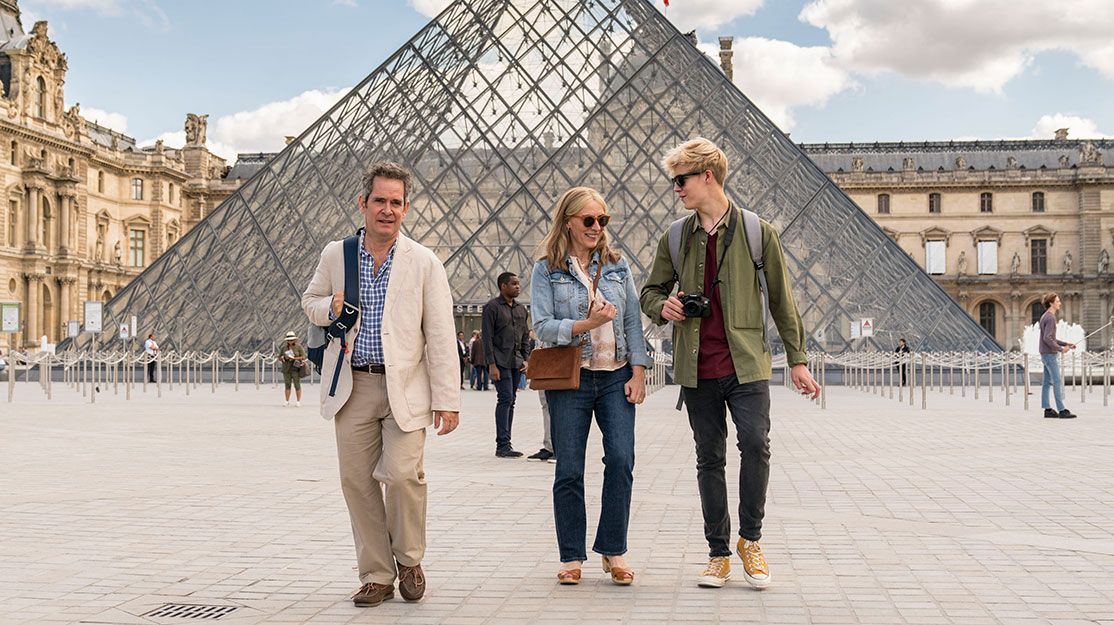 Us director Geoffrey Sax tells DQ how the BBC drama was filmed across Europe to tell the story of a family on the verge of splitting up as they embark on one final holiday together.

While four-part miniseries Us takes viewers on a journey across Europe, filming the BBC drama was anything but a holiday for director Geoffrey Sax.

Based on the novel by David Nicholls, who has adapted his own story for the screen, Us introduces Douglas Petersen (Tom Hollander), who is blindsided when his wife Connie (Saskia Reeves) tells him their marriage is over. But with a grand tour of Europe planned before their son Albie (Tom Taylor) heads to university, they agree to still go on the family holiday, while Douglas vows to win back the love of his wife and repair his troubled relationship with his son.

While Douglas has mapped out their trip to take in 12 cities in four countries over three weeks, the production team had just 12 weeks to film the series, recording scenes in and around London, Amsterdam, Paris, Venice and Barcelona.

“They decide to go to France, Spain, Italy and Holland, so all in all we shot in five countries, including the UK,” says Sax. “Douglas says on the train to Paris that they’re a bit like U2 going to all these countries, and we felt a bit like that too. We were constantly travelling to all these different cities.”

“We were on a very tight schedule. It was very ambitious because it was a BBC budget, it wasn’t a Netflix budget, so we had to do it in a certain timeframe over 12 weeks in these five countries, and that included travel and everything else,” Sax says. “There was very little room for anything to go wrong. Fortunately, the weather was for us. We only had one day of rain in the whole three months, on our last day in Barcelona. It was just an extraordinary logistical operation.”

The production train started out in London before heading to Paris, then Amsterdam, Venice and Barcelona, where filming also took place in nearby Vic and Sitges. With limited time in each location, Sax was intent on recording as much of the spirit of each city as possible, without the series ever turning into a tourism film.

“In Paris we went out on the streets wherever we could. We filmed at the Louvre, which is closed on Tuesdays so we had the place to ourselves. We did a load of exterior hotel stuff,” he says, before revealing some of the location tricks that appear throughout the series. “We did the interior of the Paris hotel in Croydon, in south London, while the breakfast room was in Harefield [in north-west London]. In Amsterdam, we filmed at the central station, got as many canals as we could and filmed at the Rijksmuseum. But the hotel stairwell in Amsterdam was shot in Paris.”

The Amsterdam hotel bedroom was set up at Twickenham Film Studios and the breakfast room was in Croydon, while various bars set in the Dutch city were actually dressed in London.

“We filmed in Venice at the end of the schedule but we only had a day-and-a-half, so it was incredibly tight,” Sax continues. “We just got as much as we could of Venice, with Douglas arriving on the Grand Canal. We went to the fish market and whipped around everywhere by boat. The organisation was incredible. We ended up at the Santa Maria della Salute, so we got a lot of bang for our buck there.

“Venice spans two episodes, so we did a lot of it not in Venice. The exterior of the hotel was filmed in the Gothic Quarter in Barcelona, the bedroom was done here [in the UK], the reception was in Barcelona. There’s a tourist shop that was in Vic. A lot of the walk-and-talks Douglas has with Freya [The Killing star Sophie Gråbøl] were done in and around Vic, which is a lovely city outside Barcelona. We didn’t go to Sienna [in Italy] so most of the shots there were done in Vic.

“Then in Barcelona, we tried to get as much as we could of Las Ramblas, tapas bars and the markets and churros bars. We went to the Miró Museum, and filmed the hotel reception at the Sheraton Skyline in Heathrow. The bedroom was the Holiday Inn in Barnet. We did go to Sitges, where we shot on the beach and the hotel exterior. The Barcelona hospital was done in Ely, near Cambridge, so the whole thing was a massive cheat. We needed to spend a little time in each country but, when we were there, because it’s so expensive, we wanted to get as much of a feel of those countries as possible and experience the grand tour with them.”

Victoria and Agatha Raisin director Sax says he didn’t want the camera to be noticeable in Us, preferring a classical visual style to tell an intimate character story that is filled with Nicholls’ trademark humour and heartbreak.

“It’s all about emotion, so I was using lots of close-ups but keeping it simple. I didn’t see it as a hugely handheld show,” he says. “There are different styles for different shows. The camera work is quite fluid, but I didn’t want it to be whipping from one character to another – what we call a nervous camera. I thought that would be distracting. I saw this as a Roman Holiday-type film. We used different colour palettes for each country and it got more colourful.”

The shoot was complicated further by flashback scenes that take the story into two different periods that recall how Douglas and Connie first met and how their relationship developed.

“We tended to be a little bit more fluid and handheld because they were younger and more exuberant and had their lives ahead of them,” Sax says of filming the flashbacks. “We didn’t go into black and white or do echoes or wobbles to get into the flashbacks. We tried to keep it as natural and unnoticeable as possible. Our production designer, Claire Kenny, had a lot of fun furnishing the house where young Douglas’s sister has a dinner party, and that’s where young Douglas meets young Connie 24 years ago. That was great to do, using music of the period and props.”

These significantly younger versions of Douglas and Connie are played by Iain De Caestecker and Gina Bramhill respectively. But for scenes set just 10 years ago, make-up designer Lucy Cain turned Hollander and Reeves into their younger selves.

“Lucy had a real job on her hands because also there’s a time in it in Sitges where Douglas gets sunburned and half of his face is bright red and she had to plot when that faded,” Sax says. “He couldn’t look like that for the rest of the story, so all that had to be really intricately planned. The whole thing was a huge exercise in figuring it out. It’s usually like a jigsaw puzzle anyway and this one was a giant one.”

Hollander describes the Petersens’ trip as the “holiday from hell.” It’s also a romcom in reverse, he says, as the break-up of Douglas and Connie’s marriage plays out in the present while the story of how they got to that point is slowly revealed.

“You see the distance between them and the things they don’t share in common, and then you see them in the past and how, when they were young, those things attracted them to each other but now they’re just irritating to each other, and they’re very poignant,” says the actor, who also exec produces through Bandstand Productions, the production company he runs with Pescod.

“The main energy of the story is Douglas trying to save his marriage and save his relationship with his son. It’s a tragicomic tale of someone trying to do that, with very witty dialogue from David Nicholls.”

Reeves believes many viewers will relate to the scenario facing the couple at the heart of the series: “There’s a lot of humour in the way [Nicholls] observes people. He’s an incredible observer of character, yet it’s also very painful because you see these people you grow to like who can’t somehow be happy together. You want them to be, but then you think, ‘Maybe they’re not really made for each other.’”

Sax expects the audience will be rooting for all three of the main characters to find their happiness, even if it means they won’t be reunited by the end of the story.

“Tom Hollander is such an extraordinary actor that, even when you know Douglas is being stupid, you’re always rooting for him and feeling empathy towards him,” the director says. “He does get himself into a hell of a mess. Connie ends up wanting to stop the holiday completely and everything falls apart but all the way, you’re rooting for him. You’re actually rooting for her as well. You always see both sides, and that’s the genius of David Nicholls’ writing.

“There’s certainly a lot of beautiful scenery to see. It’s so rare you pick up a script and think, ‘I really want to do this one.’ It’s so beautifully written. The whole thing was very well planned out at script stage. Adapting a book is always a huge thing. There was a lot of script development and they just got it right.”