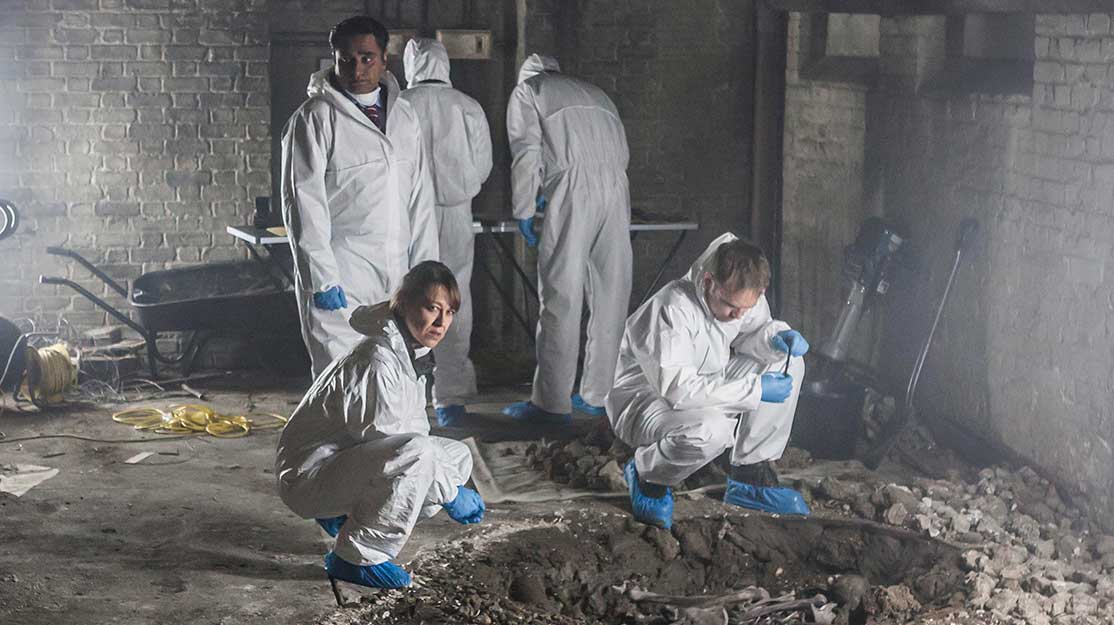 With his new ITV show Unforgotten focusing on the investigation into a 39-year-old murder case, writer Chris Lang tells Michael Pickard how police documentaries have changed the way he looks at crime dramas.

Could you live with yourself for 40 years after committing a heinous crime? That’s the question at the heart of Unforgotten, a new six-part drama now airing on ITV.

Created and written by Chris Lang (Undeniable, A Mother’s Son), it opens as the bones of a young man are found beneath the foundations of a demolished house, launching an investigation into a 39-year-old murder that will unravel the lives of four people who discover the past won’t stay buried forever.

“It’s been an incredibly enjoyable experience,” says Lang of the show’s production. “I would relish the opportunity to do it all again. It’s such a difficult process making shows and you never quite know if the alchemy is going to come together to make something good and if it’s going to be an enjoyable experience. It is just a kind of magic when it works, and I believe it has on this occasion.”

Lang’s initial inspiration for the story came from a news report concerning a historical police investigation that led to the conviction of an 80-year-old man: “I was struck by how that person’s life, in a space of a few hours, had collapsed. I just thought that was a really interesting starting point – what’s it like to live with a crime for 30 or 40 years and have a family and career, only to see them dismantled in an instant? What’s that like for the person and all those people around you? That crystallised a few ideas and then other ideas were added to that to create a story.”

The series, which is distributed internationally by BBC Worldwide, is the first commission for Mainstreet Pictures, the fledgling production company formed by former ITV drama heads and Unforgotten executive producers Laura Mackie and Sally Haynes.

“It was quite an easy commission,” Lang recalls. “I took it to Laura and Sally who I knew very well and who had just left ITV (in June 2013). We met and had a chat; I wasn’t expecting to pitch to them but they seemed very excited by the idea.

“I was working on something else and they did what good producers do – they kept hassling me to give it to them. So they did their job well and I’m glad they did. Then we pitched it to ITV and they got it immediately. It seemed a natural fit and they’ve been extremely supportive all the way through.”

In less than two years, Unforgotten has grown from an idea to a fully realised drama, which is partly attributed to Lang penning the script in just six months.

“People often say I’m a fast writer. I don’t think I’m particularly fast but I work long days,” he explains. “I start at 08.30 and often don’t finish until 19.00, and I don’t really take a lunch break. I put the hours in. People often ask me how one becomes a writer – well, you sit down at a desk and write. Quite often what you write is rubbish, but you go back the next day and rewrite it. I probably wrote the whole series in six months. Each episode probably took four or five weeks to write.”

The show was greenlit by ITV in March 2014 and went into pre-production last December with the unusual advantage of having all six scripts completed.

“For production purposes that’s a godsend because you can tie down so much,” Lang adds. “You know where everything’s set and what characters you have to cast. When I’ve worked on other people’s shows and written for existing series, you’re frequently working in a state of total chaos. The scripts might not come in until three or four days before shooting – it’s terrible for everyone. I hate doing that, so I always endeavour to have all the scripts ready before we go into pre-production.”

Explaining Unforgotten’s tone, Lang says there’s no blood or gore – “It’s not that sort of show.” Instead, he has firmly rooted it in reality in order to demonstrate changes in society over the past 50 years.

“I wanted to reflect something of the movement in society and our various attitudes,” he says. “I never wanted the storyline to feel forced or fantastical in any way. I’ve written many thrillers over the years and I hope the more I do it, the more I learn that telling stories that are completely rooted in believability are much more appealing to an audience. I hope I’ve achieved that. That was the ambition.”

The premise of the story does bring with it one particular test for any writer: how do you introduce so many characters at the beginning of a series and ensure viewers stick with it until they learn how they might all be connected? Lang says it was a “real structural challenge” but that it was a deliberate strategy, aided by a strong cast.

“A lot of dramas employ a structural device that’s quite linear, that presents one suspect and discounts them and moves on to the next again and again over the course of six or 10 parts,” he says. “I began to find that quite unsatisfying because you would invest your time and emotion in one character and then they’d be gone, so I really wanted to present a cast of characters that viewers stay with for the whole show.

“It helps when you’ve managed to attract the cast we did. Within the first 14 minutes of the show, we have introduced to the audience not just Nicola Walker and Sanjeev Baskar but Tom Courtney, Trevor Eve, Bernard Hill and Ruth Sheen and all their families, featuring Hannah Gordon, Gemma Jones and Claire Goose. If we can’t hold them with that cast, we’re sunk, but I think we can.”

With additional credits including ITV’s The Bill and Sky Atlantic/Canal+ coproduction The Tunnel, based on Scandinavian mega-hit The Bridge (Bron/Broen), Lang has plenty of experience writing police dramas.

But he credits documentary series such as 24 Hours in Police Custody, The Met and The Detectives with influencing the realistic tone and style of Unforgotten.

“The genre has evolved massively in my time as a writer,” he says. “The Bill was incredibly procedural and all about the minutiae of on-the-job coppers, but shows like 24 Hours in Police Custody are rewriting the rules about how we see the police. Our design team and director Andy Wilson used them as really helpful templates for how policing looks and feels.

“There’s a definite and deliberate move away from the highly stylised police shows where you’ve got beautiful offices and moodily lit basements where it’s arty and gorgeous. Ours are just incredibly ordinary but I hope incredibly real. Hopefully it reflects the reality more than the stylised shows do.”

For now, Lang is thankful he is working in “the best time to be a writer that there’s ever been.” In particular, he points to the “paradigm shift” demonstrated by the movement of creative talent from film to television, rather than the other way.

“Drama is riding high everywhere,” he says. “I’m constantly going to meet producers who are moving from film to television because it’s where a lot of the real creativity is now taking place in a way it wasn’t 10 or 20 years ago. In television, writers have always had more respect than in film – even more so now. So it’s a great time. Television just feels incredibly creative and it’s the place where talent wants to be. Making a film was always the holy grail of being a writer or director but I don’t think that’s the case anymore.”