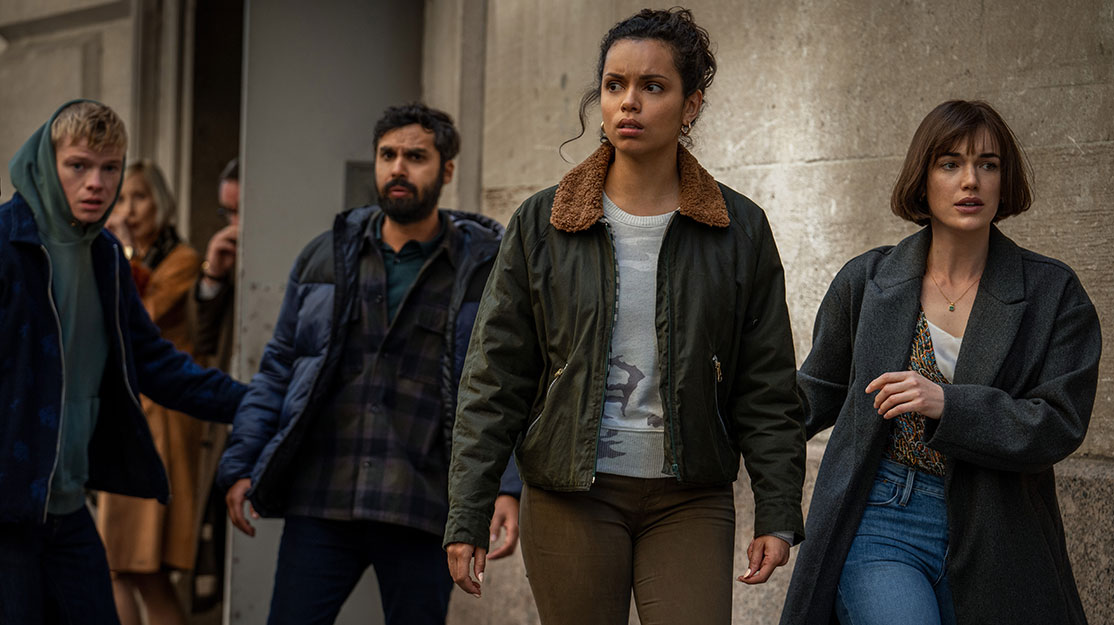 Five Britons go on the run after the son of an American businesswoman is kidnapped in Apple TV+ thriller Suspicion. Showrunner Rob Williams explains how this adaptation of Israeli series False Flag raises the stakes.

In the past five years, British screenwriter Rob Williams has written for assassin drama Killing Eve and created two shows of his own, BBC mystery The Victim and Channel 4’s recent prison drama Screw. It’s an impressive workload, particularly as he has also been developing another series at the same time – Apple TV+’s eagerly anticipated Suspicion, a pacy thriller based on hit Israeli series Kfulmin (False Flag).

Debuting in 2015, the original series opens with breaking news reports that identify five seemingly ordinary people as Mossad agents wanted in connection with the kidnap of an Iranian minister from his hotel room. But while the suspects attempt to clear their names, it soon becomes apparent not all of them are as innocent as they claim to be.

Now, in Suspicion, the action moves to the UK, where five people go on the run after being implicated in the kidnapping of the son of a prominent American businesswoman from a New York hotel. They were all at the hotel on the night in question – but as the UK’s National Crime Agency (NCA) and the FBI close in, were they all really just in the wrong place at the wrong time?

Work first began on the English-language series way back in 2017, before Williams led the first writers room in Berlin the following year. But he quickly discovered that, like most adaptations, it wouldn’t be as simple as transplanting the action to a different country. Instead, the task involved pulling apart False Flag’s central story and entirely reinventing it.

“We watched the original and we were just like, ‘This is great, it’s such a clear, compelling premise,’ and it really is,” he tells DQ. “Then you start looking at it forensically and, really, it’s about the price that has to be paid for security. We just don’t live with the same issues, so we had to find the heart of it. The plotting was difficult, but we spent so much time just trying to find what’s it about. Once we found that, it became really hard.”

At the centre of the story is US media mogul Katherine Newman, played by Uma Thurman, whose role working for a global communications company offered Williams and his writing team a shadowy world in which to explore contemporary topics such as the impact of social media, misinformation and how the truth can be manipulated.

Suspicion’s kidnap plot is just one of the ways it differs from False Flag. Another is how the suspects are first publicly identified, with news reports publicising their names and pictures in the Israeli series.

“That was another moment where we loved the original series but we couldn’t really do that. Were that to happen, instantly people [in the UK and US] would not be with you any more because they’d go, ‘That would never happen,’” Williams explains. “There were all these boring logic problems we immediately threw at ourselves and thought, ‘If we’re not going to expose them that way, how are we going to expose them?’ And equally, who exposes them becomes a question that can give you story. I would say our first episode is a much more gentle and character-based way in than the original. By the end of episode one, the pace picks up and never stops then until the final minute.”

During development, Williams identified several key markers from the original series that he wanted to hit in Suspicion, but they’re often in different places as the series distances itself from False Flag early on. Several key images also remain, such as one suspect, Natalie, being arrested in her wedding dress.

“We really liked the intensity of the interrogation scenes and decided to really push that, so we’ve got an entire episode that takes place in this very claustrophobic environment,” he says. “We’ve also written a bottle episode where the five characters come together and meet for the first time, having been connected from the first episode, which is really exciting. Those were really useful stakes in the ground to know where to head to.”

But the starting point was really finding characters Williams and his team wanted to follow through the story. “Once you do that and they start speaking to you and telling you what they would and wouldn’t do, then instantly you can’t go, ‘In episode four we need them to do this’ because they’re doing something different,” he says.

“What evolved was this increasingly current idea that when someone says something about someone on social media, how do you ever put that genie back in the bottle? Once that hare is running, it starts to have consequences, and those consequences are so much more interesting. You’re in it then, you’re telling the story.”

Produced by Apple TV+ and Keshet Productions, Suspicion is the first project on which Williams has been the showrunner, which meant he also ran a writers room for the first time. The room opened in Berlin, where executive producer and Deutschland 83 creator Anna Winger is based. From there, it travelled across Europe, to the Cotswolds and London in England and then to Norway, before heading to New York.

“I was keen to experience that, with a group of writers we thought would be a good fit. It was a really rich and rewarding experience but it was really hard work,” Williams says. “In terms of breaking story, it’s probably the hardest show I’ve ever worked on. It was hard work for five or six really smart people to get to where we got to. Then the writers go off and do other things and I hold the baby. It’s up to me to make sure those eight scripts have a voice that is coherent, and it’s me who has to answer to the directors and production and make sure they’re filmable.”

What made the show particularly challenging was the fact it doesn’t have a precinct where the story returns time and again. Instead, “we are constantly moving,” Williams says.

“We did a lot of work at Ealing Studios [in London] and built some incredible sets, but we weren’t there very long. It was a real production challenge. From the perspective of the scripts, the writers did a fantastic job, but things change all the time and you just have to respond to that. That’s the job, really.”

Directed by Chris Long (The Americans), filming began in March 2020, but just 20 days into the shoot, production paused due to the Covid-19 pandemic and the cast and crew were sent home for six months. They reconvened at Ealing Studios in November, where a penthouse suite and a couple of other significant sets were constructed. The production then went on the road until May last year, filming around London, Oxford and then in New York.

Williams was able to use the first lockdown to take another pass at all eight scripts and, having already filmed some scenes, he could rewrite them in the style and tone that had already been set.

But the most challenging portion was shooting in January 2021, when the UK was back in lockdown and scenes as seemingly simple as those set in a residential street were complicated by the fact the roads were full of cars, owing to people working from home.

One further link between False Flag and Suspicion is composer Gilad Benamram. Long was a big fan of the original music and was able to secure Benamram’s services for the adaptation.

While seven years have passed since False Flag first aired – a third season is arriving this year – updating its premise to reflect the modern world and putting the story on a global stage means Williams believes Suspicion will deliver all the high-octane action viewers will expect when it launches tomorrow.

“People who like the first one will like this but in a different way,” he says. “Within that, we explore very different worlds, very different characters and different motivations. I hope people will enjoy the nods to the original, but it really is no more than that. I hope they’ll be able to like them both without feeling there’s a contradiction there.”