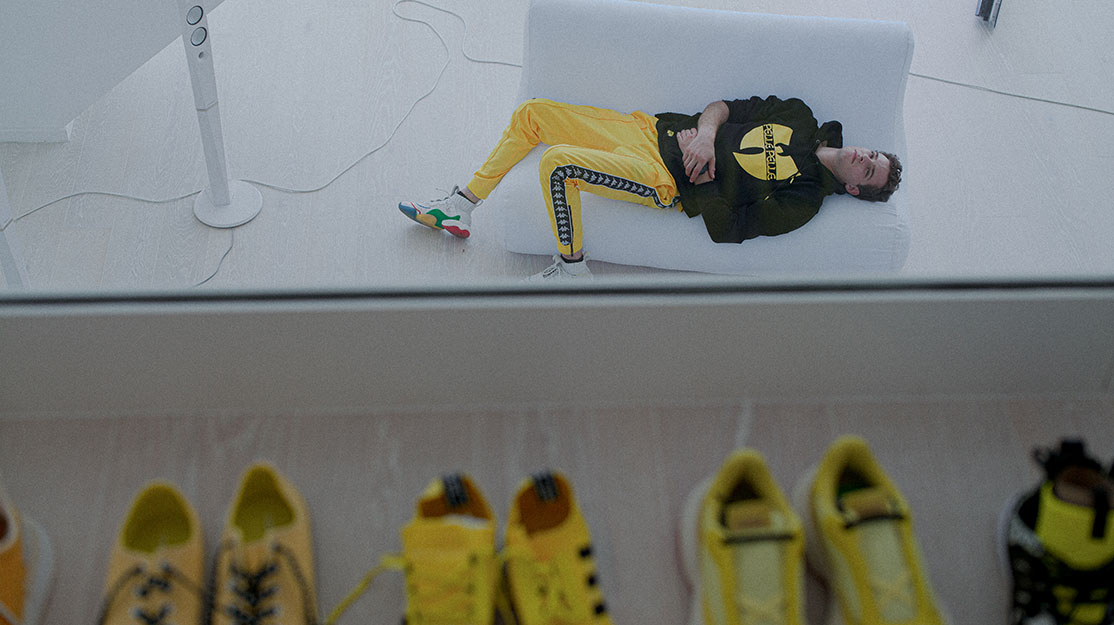 Writer Miro Šifra and Viktor Tauš reveal how Zradci (Rats) has pushed the boundaries of crime drama in the Czech Republic and discuss the show’s real-life inspirations.

With six-part series Zradci (Rats), writer Miro Šifra sought to break new boundaries in Czech crime drama. Featuring a first-person narrative, using true stories and made in partnership with the country’s National Anti-Drug Centre, it tell the story of a young drug dealer caught in the middle of the ongoing battle between the police and the mafia.

“In the Czech Republic, we are used to crime and detective stories. This changed the rules,” Šifra tells DQ. “We were trying to shoot something that is still a detective story, but it’s more like a family drama and a moral fable than just a whodunnit.”

Produced by Heaven’s Gate and Barletta Productions, Rats follows David (Cyril Dobrý) and his business partner and best friend Rene (Miloslav Pechácek) as they become entangled with a Czech and Vietnamese meth syndicate, all while David is coerced into betraying Rene by speaking with rogue cop Major Jan Blažek (Václav Neuzil).

With both the mafia and the police after him, David is forced to team up with Blažek’s unwitting partner, Petra, who has recently returned from extended maternity leave and is eager to prove herself to her politically ambitious police officer husband. As Petra and David become increasingly immersed in the criminal web that controls the gateway for meth to pour into Europe, the lines between order and anarchy collapse completely.

Šifra had originally received a call from broadcaster Česká Televize (Czech Television) in 2016, inviting him to work on a new idea they had for a series based on a book about a real-life informant’s experience of working for Germany’s anti-drug police in the 1980s.

“He worked for the police and against the Italian mafia, so the theme was interesting. And that guy was really well connected to the anti-drug police, so I knew that, with his contacts, I could get close to the police,” the writer says. “I thought I could use him as a starting point, rather than using his book, which was written 20 years ago. The drug market has changed a lot since then; I knew I couldn’t use [the book] if I wanted to talk about the present, but I could use his connections and insight to help me research the story.”

Working in partnership with the Czech Republic’s National Anti-Drug Centre, Šifra was able to base Rats on elements of real-life cases and learn more about police efforts to eliminate drug operations in the country, focusing on a story about an informant who is hunted down by the police and the drug cartel at the same time.

“I wrote my story and came back to the anti-drug police and asked them, ‘Is this too far?’” he recalls. “They said, ‘No, it’s like that!’”

As viewers follow David through the story, they come to understand his motives and decision making through the drama’s first-person perspective and use of narration – but that wasn’t always how Šifra intended to use the voiceover.

“In the screenplay, there was a normal voiceover, not this kind of straight-to-the-camera talk,” he says. “It’s important to see him talking straight to the audience and I really liked that idea. It helped to get into the head of somebody who otherwise would just be an antagonist and the bad guy.”

The series is directed by Viktor Tauš (Vodnik, Clownwise), who was introduced to the project after reading Šifra’s screenplay. He had previously been approached by Czech TV about filming an adaptation of the book that inspired Rats and had turned it down, but Šifra’s scripts made him think again.

“I loved the characters, which is really the starting point for me,” he says. “I found there was the possibility to explore these characters and get the best actors in the country to play them. At the same time, I always get personal with the screenplay when I see a possibility to explore the visual style of the text. I’m not really interested in how things look in real life. I felt there was really an option to talk about things that are appealing and describe our society on an archetypal level.

“It tells the story of the conflict between what I call a start-up society and traditional society, with three sick egos at the centre of it. That was really interesting to me. I consider directing not to be authorship or an auteur’s art form; I consider it to be art interpretation, and there were endless opportunities to explore this in Miro’s screenplay.”

Tauš’ direction is striking, adopting a handheld, guerrilla style to capture the actors on the show’s numerous sets and locations across the Czech Republic and Poland. He believes the most important part of his job is to create the world of the characters.

“Once I create the visual world that somehow explores the subject of the screenplay, I like to move with the camera. I like to be very free,” he explains. “It’s all handheld and the whole series is shot with only one 17.5mm lens, which I have loved very much since Orson Welles shot Touch of Evil with it.

“There is only one character we use another lens for, which is Dang, the villain of the show, where we use a 16mm lens so he is taken out of the surroundings and the world, because he’s somehow untouchable to every other character in the series. For every other character apart from him, I wanted to be wide, I wanted to have everything in focus so they are part victims of and part creators of their world. On set, I don’t have any technical time. I don’t light, I don’t set up the shots. I just grab the camera and devote all the time to the actors.”

Šifra, meanwhile, spent a lot of time talking to the cast about their characters and gave them the freedom to change or adapt their lines. There were no rules, he says, particularly with younger actors who could include more slang terms to give their words greater authenticity.

“I cannot write the language they speak normally, so I just told them to do whatever they want with the language, talk like you talk with your friends and don’t worry about what’s originally written in the script,” he says. “It gave them confidence in the language. They are clearly speaking present-day Czech language. In the way Viktor didn’t really care about technical things, it was the same with the screenplay. It was a starting point for the actors to become the characters.”

As a Slovakian who doesn’t speak Czech, Šifra wrote the scripts in his native language, with the cast doing most of the translation themselves. He would then join rehearsals, where he could discuss the story with the actors and, on many occasions, write new scenes during filming.

“There was a lot of improvisation, particularly in the fifth episode, which is set in group therapy, where I just set the basic premise and a lot of the dialogue was the actors improvising on the set,” he reveals. “It gives the final product more truthful or real dialogue. I really like that it doesn’t sound like it was written on the paper. I was more interested in the plot points. I was really thinking about, ‘We need to get to this plot point but I don’t really care how we get there.’”

“That’s the way I love to work,” the director adds. “I have a more theatrical process than the traditional television approach. I care more about the psychological studies of those characters and about the anthropological meaning of the whole thing and what it says about us as a society.

“I was telling more of a psychological story and I was really terrified about ruining it. But Miro was be available for us anytime we needed him. He was here on set or on the phone whenever we came up with something. We were in constant discussion about what something meant for the plot points of the story and whether we were still getting to those plot points Miro needed us to meet for the story to work as it had to.”

As you might expect with so much improvisation, no two scenes were shot in exactly the same way, which meant a particular challenge came in the editing room as the series was pieced together ahead of airing last year.

“It was pretty difficult with episode one, as it always is,” admits Tauš. “We were actually working on it for two months, which is a lot, and then we were coming back to episode one after almost every other episode. It was pretty challenging in the beginning because we were rediscovering what we had in the footage and finding the right balance between the time devoted to the characters and the time devoted to the plot.

“It was also challenging because Czech Television has mainly older viewers. This screenplay is unique. It might be the first series really written for younger audiences, so we had to find a balance to make it appealing to their general audience and to younger viewers too.”

Editing was further complicated by the need for two versions of the series: one with 70-minute episodes for Czech viewers and a 60-minute international version that is being distributed by GoQuest Media.

And while Šifra was keen for Rats to break traditional storytelling rules in the Czech Republic, Tauš believes the writer is one of a number of creative talents in the country that can now continue to push the boundaries of TV drama – and bring others along for the ride.

“Shows like ours open up the mind of directors to keep up with writers who, at the moment, are much better than we are because, for some reason, the majority of filmmakers here still take television as something that’s not as good an opportunity as a feature film,” he says.

“I love television very much, so hopefully we have created a base for others to dream and explore the visual storytelling that writers like Miro are exploring in screenwriting. Czech Television responds to that and definitely wants to be part of this movement.”