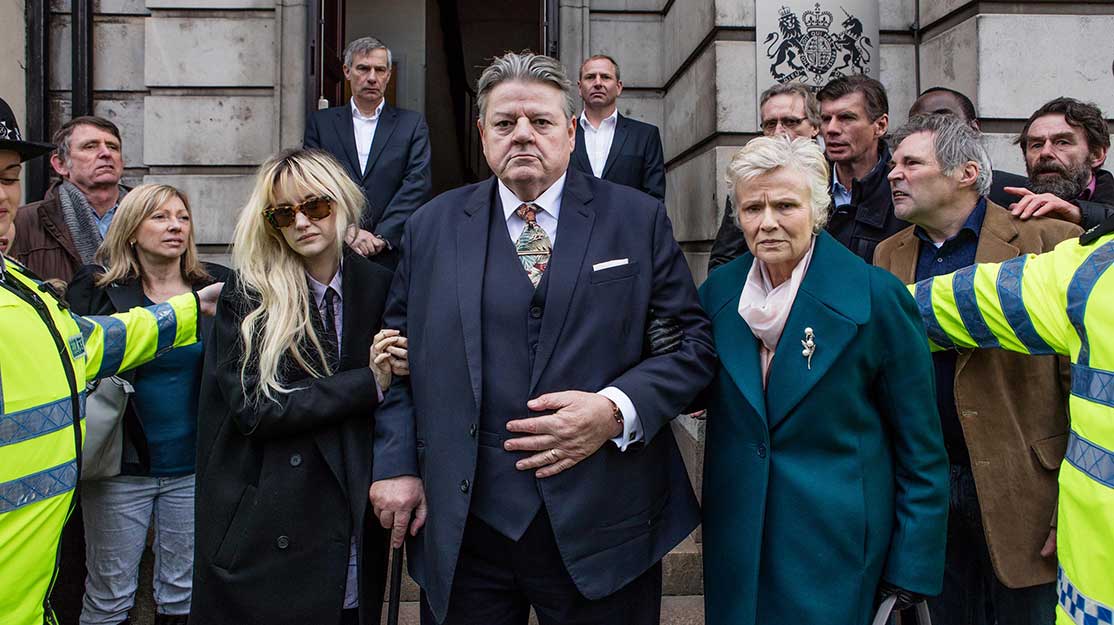 Operation Yewtree, the investigation led by British police into historical sexual abuse carried out by Jimmy Savile and other high-profile personalities, is now the subject of four-part drama National Treasure. DQ hears from writer Jack Thorne and stars Robbie Coltrane and Julie Walters.

It was a 2012 documentary that first lifted the veil over the late British entertainer Jimmy Savile’s trail of sexual abuse across many decades. The revelations kickstarted a police investigation, coded Operation Yewtree, that examined allegations of abuse made against Savile and others, and went on to uncover similar crimes committed by other celebrities including Rolf Harris and Stuart Hall.

Four years later, a four-part television drama is exploring the fallout when a beloved entertainer is suspected of historical sex crimes.

National Treasure, which debuts tonight on the UK’s Channel 4, sees Paul Finchley, a much-loved, ageing comedian find his world shaken to its foundations after an accusation of rape that dates back to the 1990s. As he is taken for questioning, his wife Marie must decide whether to stand by him, while their troubled daughter, Dee, begins to question her relationship with her father.

Robbie Coltrane stars as Finchley, with Julie Walters playing Marie, his deeply religious wife of 40 years who has stuck by him through thick and thin. Andrea Riseborough completes the stellar cast as Dee, a recovering addict who is struggling to stay sober and be a good mum to her kids.

Thorne recalls: “George Faber took me for lunch and suggested the idea. It’s an overwhelming idea in lots of ways because the responsibility of it is so massive and the idea that we might get it wrong felt very dangerous because so many people have been damaged by this stuff.

“But the idea of telling a story about it, particularly where our country is now and the fact that we let not just an evil man but a monster [Savile] onto our television sets for that amount of time. So the opportunity to examine these cases felt important. We just immersed ourselves in research and tried to tell it as well as we possibly could.”

Thorne, whose credits include The Last Panthers and the This is England franchise, met with abuse victims, police officers and barristers, among others, to try to get as much insight into their experiences as possible.

“It was sometimes incredibly hard to hear,” he says, “people telling me they were pretty sure they were abused on such a date but they were aware their memory wasn’t strong and they didn’t know they would be able to stand it up. [There were] transcripts of trials where you see someone being torn apart really gently as the geography of a house undermines them. Then amazing police officers who have devoted their lives to catching these people and who have all got different ways of helping.

“One of the most extraordinary insights was the fact that an officer we worked with said she would watch YouTube clips of the person she was interviewing before she interviewed them in order that she could flatter them on the way to the interview room. You kind of go, ‘That’s so brilliant that you would think to do that.’ And that, I think, is what drama can do better than any other form in terms of telling a story about this. Drama is about seeing behind the eyes of a case. It was a really daunting prospect but one that felt important to do.”

That sentiment holds true for Walters and Coltrane. The latter, the star of police series Cracker, says the quality of the script and the responsibility of the subject matter meant National Treasure was a project he was keen to join.

“Every day another stone gets lifted and somebody in the judiciary or parliament or a medic [is exposed]. It’s just appalling and I think it appalls all of us,” Coltrane says. “Importantly, at the risk of sounding pious, the power of drama is that you can deal with these things in a way that the judiciary, the police and parliament can’t, or seem unable to. I thought it was an important thing to do.”

While Coltrane faced countless scenes in a police interview room, Walters’ Marie is left at home to come to terms with what her husband has been accused of.

“It was just fascinating playing a woman like that,” the actress admits. “It was wonderfully written; written in a complicated, multi-faceted way and all of the reasons she stands by him were fascinating to go into. Her faith, because she’s a Catholic, is the thing that’s kept everything together. It’s just really interesting – her slightly buttoned-up way and how she could be with someone for that length of time despite whether he’s done this or not, the string of infidelities that have gone on throughout their life, the fact that she wants to keep the family together and the fact she loves him. He’d be out the door but she’s not like that and it’s just really interesting to do.

“It’s a drama about family and that’s what’s fascinating. In the end, it’s how you respond to one another and emotionally how we deal with one another. That’s the most fascinating thing for me about drama and I think it is for most people. You do look at these cases and for me it’s the wife [of the person accused] – I think, ‘I want to know about her.’”

Coltrane, Walters and Riseborough were able to explore the complexities of their characters in full during what Coltrane calls “an almost unparalleled joy” of two weeks of rehearsal before the cameras started rolling.

“It was fantastic because we had a chance to talk through our characters, what their relationship was and how they made a go of their lives together,” he says. “And Jack, the amount of research he did, we asked him questions non-stop for two weeks and he always knew the answer.

“The crucial thing about it is, at some time or other, [the accused is] going to have to stand in front of 12 ordinary people who are going to decide whether it happened or not. So it doesn’t matter how technical or convincing your arguments are to a policeman or a lawyer, they’re not going to be making the judgment. It’s going to be you and me – a butcher, a baker and a candlestick maker – and that’s absolutely crucial. It was fascinating from that point of view.

“Episode one is not about whether he did it or didn’t do it. That’s hardly mentioned. What it’s about is what it would be like for any one of us if someone came to the door and said you’d raped somebody 20 years ago and your life literally falls off a cliff. Whether you did it or not, that’s what episode one is. It’s not until episodes two and three where there’s a shift.”

Director Munden credits Thorne with leaving viewers in the dark about whether Finchley is guilty: “The writing’s very clear about this man being neither innocent or guilty,” he adds. “We’re kept on a knife-edge and my job really was to try and preserve that and invite the audience in with their own prejudices to bring to bear on that and just keep people throughout four hours of a drama guessing and because they’re guessing and bringing something to the debate.”

That guessing will continue over the next four weeks as viewers will be left wondering whether Paul Finchley retains his status as a national treasure.