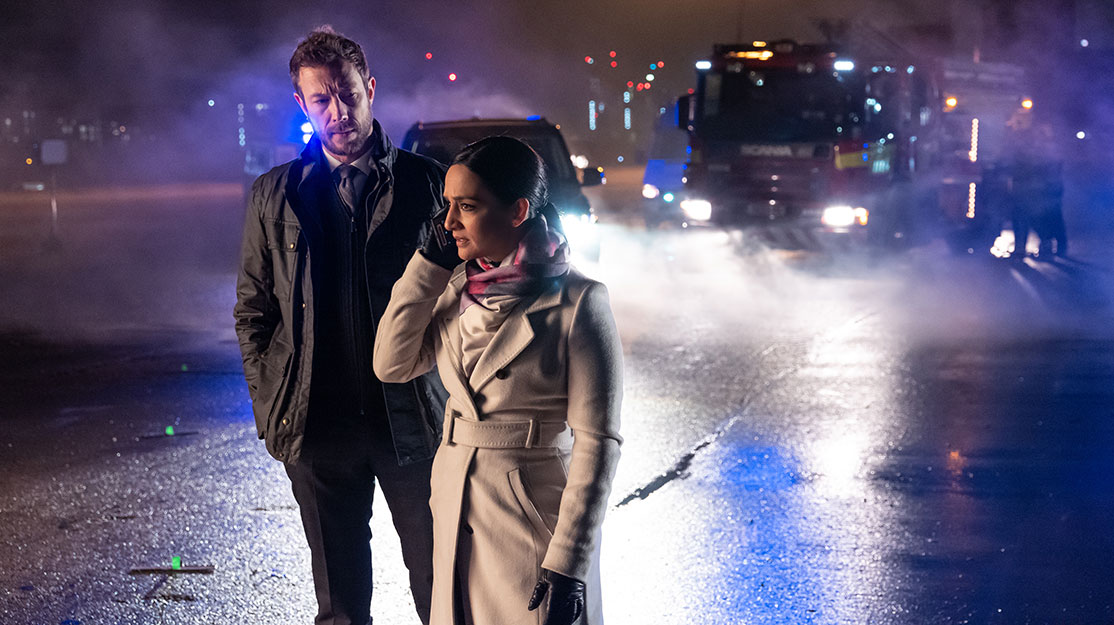 Having made her name stateside in The Good Wife, British actor Archie Panjabi takes the lead in new thriller Departure. She speaks to DQ about her role in the series, being an executive producer and working in Hollywood.

For those afraid of flying, the first nine minutes of Departure are probably best avoided. After a succession of passengers strap in for a red-eye flight between New York and London, the tension rises rapidly as turbulence and an almighty explosion hit the aircraft somewhere over the Atlantic Ocean, causing it to disappear from the radar.

Accident investigator Kendra Malley (Archie Panjabi) is subsequently ordered by her boss, Howard Lawson (Christopher Plummer), to investigate the disappearance of Flight 716. What follows is a twisting, pacy thriller that sees Kendra try to solve the mystery of why the plane vanished – terrorism, electrical faults and pilot error are all under suspicion – and the fate of its 256 passengers.

It was a setup that instantly appealed to Panjabi, best known for her six-season stint on CBS legal drama The Good Wife. “It was fun, it was thrilling. It’s a good script,” she tells DQ at the Monte Carlo TV Festival. “They sent me all six episodes, which is a rarity, and I couldn’t put them down. That’s a good sign! If I’m reading it, I want to know what happens and that’s the hook for the show. It’s about something deeply fascinating, particularly today, and I wanted to know what happened. Christopher was already attached to it, it’s a good story and it’s reflective of our time. I thought, ‘Let’s do it!’”

As well as attempting to uncover what happened to the plane, Kendra is also battling her grief over the death of her husband, which had seen her take a leave from work – only to be brought back to the coalface when Howard summons her to work on this new case.

“That’s also what drew me to it,” the actor explains. “On the one hand ,it is investigative because you want to find out the answers but, on the other hand, you have her story running in parallel. She’s gone through this awful accident. She hasn’t really dealt with her grief and this forces her to deal with it.

“That’s what gave me an added bonus to do the story. It wasn’t just about the plane; it was about how she, in trying to bring closure to the victims’ families, is faced with her own truths and has to deal with that, which is quite difficult for her because she’s quite good at helping other people but not dealing with her own past. You really get to see that in the later episodes where there’s some really quite heavy, emotional stuff.”

At the heart of the London-set story is the “great big wheel of suspects,” as Panjabi describes it, with numerous potential causes of the plane’s disappearance placed under the microscope by a supporting cast of characters played by Kris Holden-Tied, Tamara Duarte, Mark Rendall, Peter Mensah and Claire Forlani. Rebecca Liddiard plays Madelyn, one of the passengers who may be linked to the mystery.

“You just don’t know,” Panjabi says of the reason behind the aircraft’s fate. “But just when you think you’ve found evidence that points to one culprit, you find something else and that wheel just gets bigger and bigger. It gets quite scary in terms of what causes the flight to disappear.”

To play Kendra, Panjabi had to brush up on her aviation knowledge, including getting to grips with ACAS, the Airborne Collision Avoidance System. But the technicalities of Kendra’s day job are always balanced with the pressures the character faces at home, dealing with the loss of her husband and the ongoing conflict with her stepson.

The British actor’s role isn’t merely confined to the screen, however, as Panjabi is also an executive producer, working alongside director TJ Scott and production companies Shaftesbury in Canada and the UK’s Greenpoint Productions. She describes the partnership behind the scenes as a collaborative affair, where her ideas were taken on board and she was consulted about potential changes. “That made it a lot more fun and the way TV should be,” she says. “It didn’t feel like I had my EP hat on. It just felt like you could talk about ideas and the direction of the script.

“I was very open because there’s so much about making TV I don’t know. So for me, it was a very educational lesson. I feel like I come with the character study and instinctive stuff and that just adds to all the other wealth of talent you have.”

Panjabi built her career with roles in British series such as The Bill, Life on Mars and Silent Witness before heading to the US and joining the cast of The Good Wife in 2009. She went on to appear as investigator Kalinda Sharma in more than 130 episodes before she left the show in 2015. She has since starred in NBC drama Blindspot and returned to the UK for ITV thriller Next of Kin.

The actor says it was a dream come true to land work in Hollywood, noting: “As great as the British industry is, and I love it, Hollywood is just the ultimate for every actor. When I went there, I had no expectations but I was so excited to go. What’s really nice is you also get a lot more recognition in England so you can come back and still work.”

Discussing The Good Wife, Panjabi says she was “blessed” to work on the show and loved playing Kalinada for six years. “I was allowed to have an input on my character and she was just so fun to play because she was so mysterious,” she adds.

The strength of the British system, she says, is that the director is the “captain” of the production, rather than the hierarchy of producers more commonly found in the US. Her next production, HBO limited series I Know This Much is True, is led by writer/director Derek Cianfrance.

“I love that because, visually and creatively, he’s got the power to work with the actors,” she says of the series, which stars Mark Ruffalo as identical twins in a story about betrayal, sacrifice and forgiveness. “But when you have a whole hierarchy and you have to ask permission for every creative change, I think you lose some of the magic. Some of the more successful shows are going to the British model where you’re just working with the director. I love that way of working. It was a bit like that on Departure. TJ was the captain.”

Departure, which is created by Vincent Shiao with Malcolm MacRury as showrunner, was filmed across six weeks in Toronto, with further location shooting in London. “We had plane crashes, a submersible, a car crash – there are so many things that happened. I don’t know how we did that in 40 days. But TJ was always very calm and willing to adapt and compromise and chill. It was a really fun shoot,” Panjabi says.

With recent real-life disasters generating headlines about aviation security and safety around the world, Departure certainly taps into a topical subject. The actor describes the series as “unique” and notes that while a plane crash is “everybody’s worst fear,” the series does offer some hope to viewers in the end. “I just think a series like this has not been done,” she continues. “We’re witnessing the families and what they go through and how it also affects someone investigating it and how they deal with the politics of that, because you have the government on your shoulders, the press, the victims’ families – how do you cope with that?”

Departure will air on NBCUniversal International Networks across Europe and Africa, plus 13th Street in France, Spain and Poland, following deals with distributor Red Arrow Studios International. It is also due to air on Canada’s Global TV next year.

Now three episodes into its run on Universal TV in the UK, the show is proving to be intensely watchable, which proves Panjabi’s attitude to picking scripts is on the money: “I just read something and think instinctively, as a viewer, would I watch it? It’s all about the people, the character and the script.”