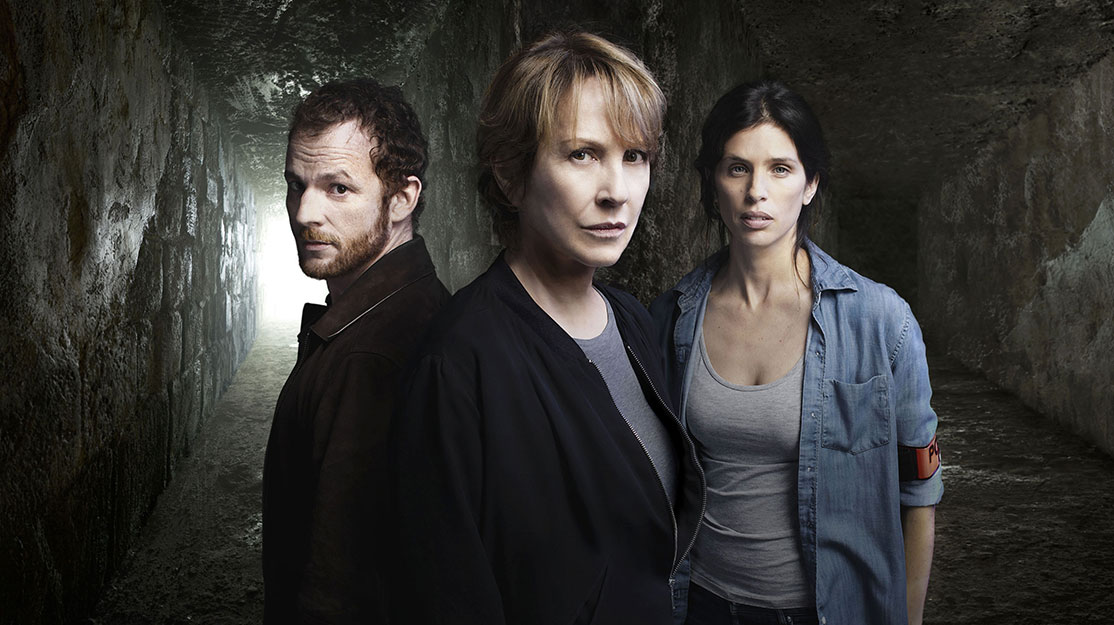 The search for a missing woman takes two police officers beneath the streets of Paris in Canal+ original series Nox. DQ braves the dark to find out more about this six-hour ‘super-movie.’

For more than a century, the catacombs beneath Paris have attracted tourists from around the world keen to glimpse a small section of the vast tunnel system that sits beneath the French capital.

Unsurprisingly, the creepy location has provided the backdrop for more than one horror film, most recently including 2014’s As Above, So Below and 2007’s Catacombs. And now French broadcaster Canal+ has become the latest to head below the Paris streets, setting six-part thriller miniseries Nox in the eerie maze of sewers and basements beneath the city.

The show stars acclaimed actor Nathalie Baye as retired cop Catherine Suzini, who is forced back into action when her daughter Julie (Maïwenn), who followed her into the police force, disappears into the sewers. Along with the help of Raphaël (Malik Zidi), her daughter’s partner, Catherine chases every clue and uses all her instincts to navigate this terrifying subterranean labyrinth.

The show’s origins can be traced back to producer Gaumont and Canal+ partnering with Cavayé (The Next Three Days), who had an idea for a series about a woman whose daughter disappears into the basements of Paris. The central character would be an older female police officer, unlike any other detective on television, while the programme would also explore a different side of Paris.

“From the beginning, the series was very dark,” says Isabelle DeGeorges, series producer and Gaumont’s president of French television. “We wanted to show how humanity can be dark sometimes. There are also two big emotions: the the love between mother and daughter, which grows stronger as she thinks she will never see her daughter again, and fear.”

Tran and Fansten joined the project when Cavayé began developing the series. “I have always been fascinated by tales and myths of descents into hell, like Dante or Orpheus and Eurydice,” Tran says. “So that was the concept – a mother who goes through the circles of hell to find her daughter. I thought it would be a great idea for a TV show because at that time we were in the wave of Nordic crime dramas with mysterious lakes and forests – lots of very atmospheric shows. We wanted to go back to something very urban.”

The trio wrote the plot and script outlines together before Tran took on writing duties for the miniseries, which exploits the complicated structure beneath Paris that dates back to the late 1300s.

“The sewers are a maze – if you connect them all together, it’s the distance from Paris to Moscow, so it’s huge,” says Tran. “We knew we had a fantastic playground but we also knew we had to go through each level of the story with a different degree of intensity. It had to be progressive until the finish, which I think is very strong.”

The key to Nox is not its location, however, but how the writers and director keep the tension high throughout with a cast of believable characters. “If you do not care about the characters, you’re lost,” Tran continues. “It’s a very cruel, dark and contemporary tale but what makes it enticing are the characters. Of course, you want to watch the whole show to understand what’s happening below, but mostly you want to watch the whole show because you care about the characters and you don’t want anything [bad] to happen to them.”

Writing the scripts, Tran says he channelled the inspiration of Oscar-winning writer William Goldman (Butch Cassidy & The Sundance Kid, All the President’s Men), whose screenwriting has a very visual style. “Usually reading a script is boring, but I learned from him that you should have something that’s very graphic and describes things around you so your imagination can work at full speed,” Tran explains.

Cavayé had initially been slated to direct the series but when he stepped down, El Mechri took over, attracted to the project by both its setup and its lead character. “The underground of Paris is a very specific setting, but logistically it’s been a nightmare,” he admits. “The sound is awful and you have a lot of problems having the crew in a very tiny space. So it was difficult, but very exciting.

“The second thing [that appealed to me] was the strong female character that was the real hero of the story, and having the opportunity to work with one of the best actresses in France.”

Production, which took place between July and November last year, was split into three sections – shooting the tunnel scenes inside a ‘sewer school’ north of Paris; studio filming for scenes including the characters’ homes and the police station; and then “tourist friendly” location shots on the streets of the city.

“It was very difficult because half of it is set underground,” DeGeorges says. “We had to create the universe of the series, to find what we could beneath Paris and create what doesn’t exist. It took four months to build the sets of underground Paris, so it was a very challenging production.”

Perhaps unsurprisingly, filming underground proved the biggest task for the crew, who found themselves cramped together in unforgiving conditions, particularly when they had to find a way to light scenes that would otherwise have been pitch black, out of reach of sunlight or moonlight.

“Our focus was to keep working on the characters, even if we were in those really hard conditions,” El Mechri says. “The more we were on the surface of Paris, the more we used handheld cameras. Then the more you get underground, the more the camera stops moving, just for your eye to be able to focus on whatever you want in the frame. We kept that principle with us and tried to get something coherent through the whole series to make the audience understand that concept. You just want them to feel that the deeper you go, the more wider shots there are, giving you the chance to discover the underground of Paris by yourself instead of someone telling you where to look.”

To make things more complicated, Baye informed El Mechri when they first met that she was claustrophobic. “She told me, ‘I hate being tied up, I hate having a blindfold,’” he recalls. “But we gave her the whole treatment, the whole nine yards, throughout shooting. She was really a soldier through the series. She was invested and really great to work with, very funny and very professional.”

Prior to shooting, El Mechri uses “natural” readings to allow actors to find their characters, rather than spending time on set in rehearsals. “We don’t try to break a record in rehearsal,” he explains. “It’s a privileged relationship you have with the actor at that moment [when they’re in character] so I want to be ready for that.

“We clear out any doubts about motivation or dialogue on the table but, after that, let’s shoot the rehearsal and see what happens. My job is to keep an actor in a state where they think they’re going to have the time of their life. I just push the camera and say let’s roll, forget about the process. Just be in the situation with the characters.”

Then when the cameras were rolling, “we really did something that I don’t think has ever been done before on French television in the way we shot Paris,” El Mechri asserts. “It’s semi-documentary because we wanted to show something very realistic, so there’s a lot of handheld camera work. At the same time, we messed up the colours to give something more subjective to our take of Paris and how an underground thriller could be done. It was important to have sunny locations versus something very deep underground.”

The director describes Nox as a “super-movie” owing to its six-hour, closed-end format, differentiating it from previous TV projects he has helmed, such as period drama Maison Close, also for Canal+. “I was a huge fan of The Sopranos and the first golden age of HBO,” El Mechri says. “You cannot beat something original and, at the same time, addictive. I think our job in TV is to be entertaining enough not to have somebody touch the remote control, as opposed to the movie where you have to get a nanny, get your popcorn and tickets and go to watch something. Going to the cinema is more of a political act than just being entertained.”

Tran also sees increasing parallels between French television writers and their US and UK counterparts. “There’s no denying that British and American writers are way ahead, skill- and talent-wise,” he says. “French writers have been working very hard; we’re not there yet but we’re working on it. Hopefully it will pay off one day. It’s like pole vaulting – every time, you get an inch and another inch. That’s the story of the French writer; we’re fighting. It’s always been tough and it will always be tough. But series like Bureau des Legends and Les Revenants show there is a light of hope.”