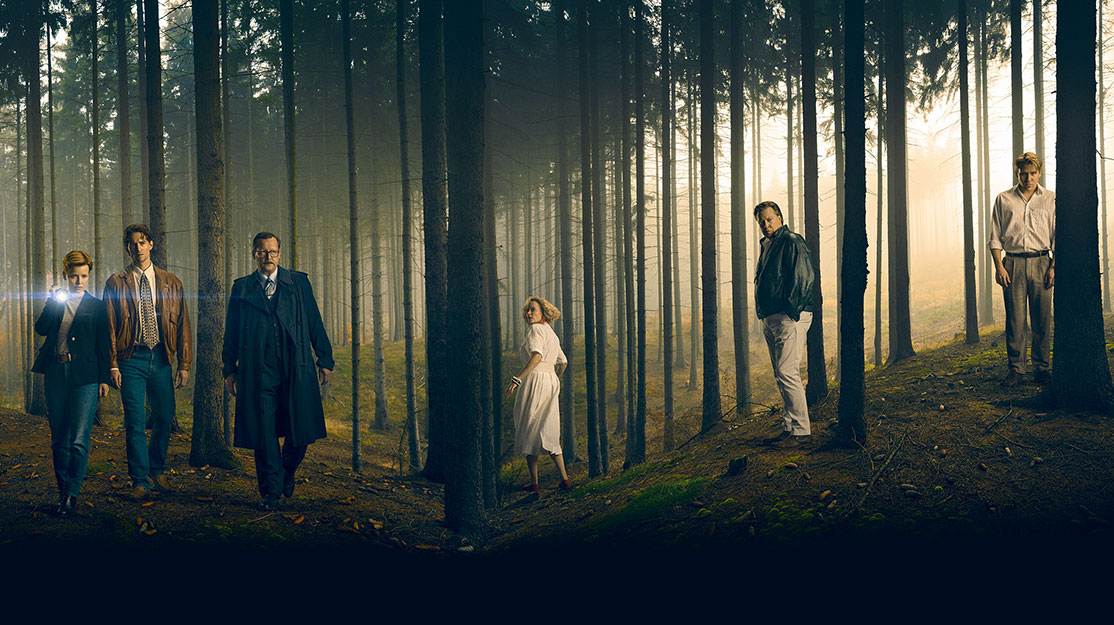 The real-life police officers who inspired Danish drama Efterforskningen (The Investigation) and German series Das Geheimnis des Totenwaldes (Dark Woods) tell DQ about seeing themselves and their work on the small screen.

True crime continues to dominate traditional and digital networks as filmmakers seek to bring to television the real stories behind some of the world’s most fascinating, horrifying and high-profile crimes.

But what is it like for those who were involved in the actual cases to then participate in dramatising them for the small screen?

A meeting with Danish producer Miso Film and filmmaker Tobias Lindholm led Jens Møller, the former head of homicide at Copenhagen Police, to recount his involvement in the search for missing Swedish journalist Kim Wall, which became known as The Submarine Case.

Wall had boarded a submarine belonging to Danish inventor Peter Madsen for an interview, but the vessel was later found to have sunk with no sign of Wall on board. Over 160 days, Møller and his team discovered parts of her body in water off the coast of Copenhagen, before successfully finding the evidence that convicted Madsen of her murder.

Lindholm retells the story of how justice was secured in six-part drama Efterforskningen (The Investigation), which focuses solely on the police case without so much as naming the man eventually found guilty of Wall’s murder. Produced by Fremantle-owned Miso Film in cooperation with Outline Film for Sweden’s SVT and Nordic Entertainment Group’s Viaplay, it is distributed by Fremantle, with the BBC and RTL among the buyers.

“From the very first conversation, it was clear to me that Tobias had exactly the right approach to telling this story. The only approach that was possible, actually,” Møller tells DQ. “It was an approach that went deeper and beyond the sensationalised media coverage. It was the story about the collaboration between institutions and between people, and the personal story about several of the implicated people.

“Tobias had the idea for how to approach the story. We went through it together, and I read the scripts during development and made different comments as to how the police work was approached and portrayed in the series. I was also allowed to be on set almost all of the way, where I had the opportunity to contribute again with my knowledge about police work.”

Møller continues: “Being part of such a huge undertaking and seeing all the people putting in the hours to create this show really made an impression. The level of detail Tobias went into in order to make this series in many ways reminded me about the attention to detail I have had in my own work with the police throughout the years.”

On screen, the police chief is portrayed by Søren Malling, who had previously worked with writer-director Lindholm on political series Borgen and film A Hijacking. But the drama also steps into Møller’s personal life, detailing the strain his work puts on his relationship with his wife and daughter.

“The series is fiction, and the person in the series isn’t a complete portrayal of me as a person,” Møller says. “That being said, I think Søren really did a fantastic job trying to portray the professional side of my life.

“Søren and I met several times, where he gathered what characteristics from my person he would be able to use. It wasn’t my job to teach Søren anything about playing me; I only told him about my life and my work. From then on, it was Tobias and Søren’s decision how the character Jens Møller should be.”

The real Møller describes working on The Investigation as a “fantastic experience,” though he admits it was very emotional reliving the case.

“I remember the investigation as a long, tedious and very demanding process, where new challenges constantly appeared and where the police’s capability to keep thinking creatively was really put to the test,” he says. “I’m extremely happy with the result and very proud of the TV series. It honours the many people involved in making the investigation happen in a beautiful way, and I hope viewers will get a more nuanced view of cases like this and a knowledge of the teamwork it takes to solve homicide cases and other hard crimes. It isn’t a job of a single individual or a team of two people like in many crime shows.”

Meanwhile, six-part German series Das Geheimnis des Totenwaldes (Dark Woods) is inspired by the real-life disappearance of a woman from Lower Saxony, which is now considered to be one of the most infamous crimes in the country’s post-war history.

In the summer of 1989, Barbara Neder (Silke Bodenbender), the sister of high-ranking police officer Thomas Bethge (Matthias Brandt), disappears without a trace, shortly after two couples are murdered in nearby woodlands. Hans Lingner, an artist and gun enthusiast living nearby, quickly attracts suspicion.

The links between the earlier murder cases and Barbara’s disappearance are not initially picked up by the investigators. Instead, the police begin to suspect Barbara’s husband Robert (Nicholas Ofczarek).

As a Hamburg police officer, Bethge is not allowed to investigate a crime in Lower Saxony, so he seeks support from his colleagues Anne Back (Karoline Schuch) and Frank Behringer (Andreas Lust). His quest for justice continues long after his retirement as he and his team eventually, through painstaking and meticulous research, get on the track of a suspected serial killer.

Directed by Sven Bohse and written by Stefan Kolditz, the series is inspired by a real criminal case that remained unsolved for nearly 30 years. Wolfgang Sielaff, the brother of the missing woman and the former head of the Hamburg State Office of Criminal Investigation, and Reinhard Chedor, who also previously held the same role, assisted the production as consultants.

Sielaff admits he wondered what effect a TV series would have on him and his family, but says he eventually agreed because he thought any programme should not just be about the crime but about the victims as well.

“This was a matter of great concern to me,” he says. “I am grateful to those responsible that this important aspect has been brought out well in the series. After all, it is always forgotten that the bereaved, the relatives, are also victims and suffer for the rest of their lives.”

He says he was initially uncertain about being portrayed on screen, not knowing what to expect, “but I had to keep reminding myself that this was a fictional series and not a documentary. Obviously, as a fictionalised character, my portrayal doesn’t reflect me as I am. Naturally, this has to do with the intended dramatic effects of a series.”

The former police chief met Brandt several times, noting that the actor was interested in what had happened in his sister’s case and how his family had been affected .“I am proud that one of the best German actors plays my role,” he adds of the Babylon Berlin star.

“The series has definitely modified and expanded the story, in that I have gained insight into the development and production of an event series. Looking behind the scenes of a big-scale production was very impressive. I’ve met interesting and professional filmmakers with high standards at all levels of film production. I was also impressed by the professionalism of the actors and everyone involved on the set. This was a new and important experience for me.

“Dark Woods is an exceptional and intriguing high-end series with an A-list team in front of and behind the camera. I am sure it will resonate well with viewers.”

Distributed by Global Screen, Dark Woods is coproduced by ConradFilm and Bavaria Fiction for Das Erste and is due to air later this year. Bavaria Fiction executive producer Maren Knieling had previously worked with Sielaff on a previous project, Hidden Identity, and the series began development a year before the body of his sister was found in 2017, thanks to his private investigation into the case with former colleagues and friends.

“For us, it was very important to involve Wolfgang and his family, as well as his private team and former colleagues, in the production, because we wanted to develop Dark Woods in the best possible way and treat the victims with the utmost respect,” Knieling says. “The challenge was to achieve the balancing act of tracing real events on the one hand and creating authentic fictional characters on the other.

“To this day, the real crime may still not be completely solved. The murderer, who eventually committed suicide in detention while awaiting trial, possibly had an accomplice, and further cases are currently still under investigation, as there are still many missing cases – even outside Germany – that could fit in with the murderer’s modus operandi.”

“During the development phase of the project, we constantly worked together with Wolfgang, police psychologist Claudia Brockmann and Reinhard Chedor,” she says. “We met with them and they influenced our development work in a special way before writer Stefan Kolditz came on board. Being blessed and cursed at the same time, we tried our best to fulfil our responsibility in keeping the story’s core but, at the same time, being free to develop a unique, touching and compelling fictional series. During the treatment phase, director Sven Bohse joined and became a part of regular feedback discussions with our consultants.”

The series follows the course of the original case without exactly reproducing what really happened. Many characters are composites of real and fictional people, while others are completely fictional. But one of the challenges of the show was following the events over several decades, with the actors being aged up by 30 years.

“This required meticulous planning of all departments, and make-up times of up to three hours,” Knieling reveals. “The elaborate set design, with the detailed replica of the perpetrator’s house, was also very complex to create.

“Personally, the scene when the body is finally found hits home. The sadness is overwhelming, but there is also a sense of relief that the family finally finds some kind of closure. Shooting that scene was very emotional for the whole team.”

The exec producer says the aim of the series is to show the consequences facing the victim’s family and to give them a voice. “Criminology defines the term ‘victim’ as a person who was injured or harmed in the course of a crime. For us, this term is not broad enough,” she says. “The relatives are forgotten, but they have to deal with both the loss of a loved one and the additional burden of an unsolved crime and the associated suspicions and ambiguities.”

When it comes to the popularity of true crime series or those inspired by real cases, Knieling says viewers tune in to face their worst fears. “In our case, you realise how randomly you can become a victim of a serial killer who literally lives next door, the seemingly perfect neighbour,” she notes of Dark Woods.

“You identify with the family and you are angry and speechless at the official investigation at the same time. It’s an emotional rollercoaster ride and the opposite of escapism.”